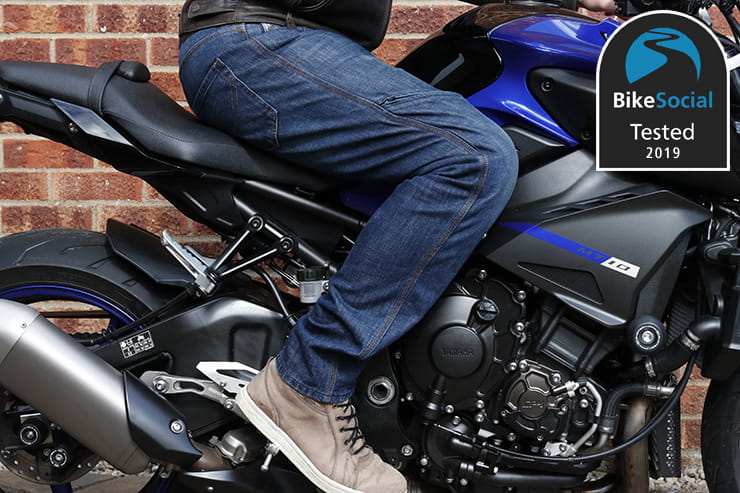 With street, custom and cruiser bikes becoming ever more popular – and fewer riders feeling the need for full leathers and knee-sliders on the road – motorcycle riding jeans are the choice of many. Promising good levels of protection in a comfortable, casual style, a mixture of denim and para-aramid fibre is my go-to for many rides.

I’ve worn the AlpineStars Copper Out jeans reviewed here on a Yamaha MT-10, Niken, Grom and more, living with them for full days both on and off the bike… 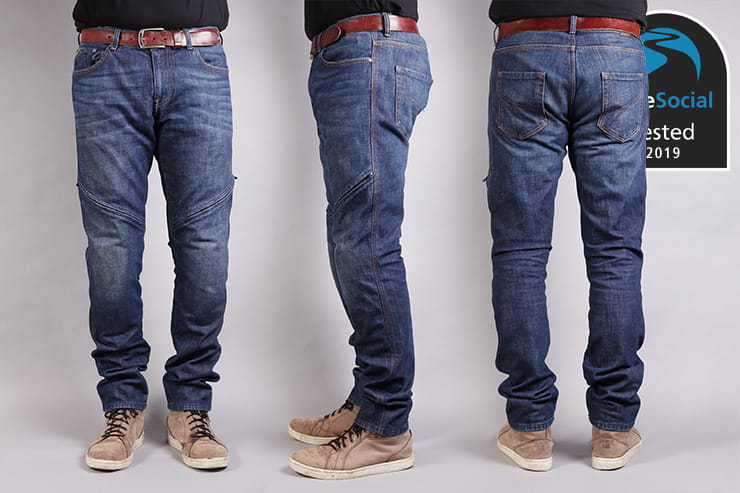 Fit is of course very subjective, and shouldn’t be the basis for your choice until you’ve tried them on yourself. I’m 5’10” with a 34” waist and 32” inside leg – the Copper Outs that I’m reviewing are a size 34 and fit very comfortably. I’ve worn them for full days in the office and they’ve always felt good, though while a fashionable-looking cut, I did find that when bending over, the back of the AlpineStars would pull down a bit, leaving me to tug them back up. 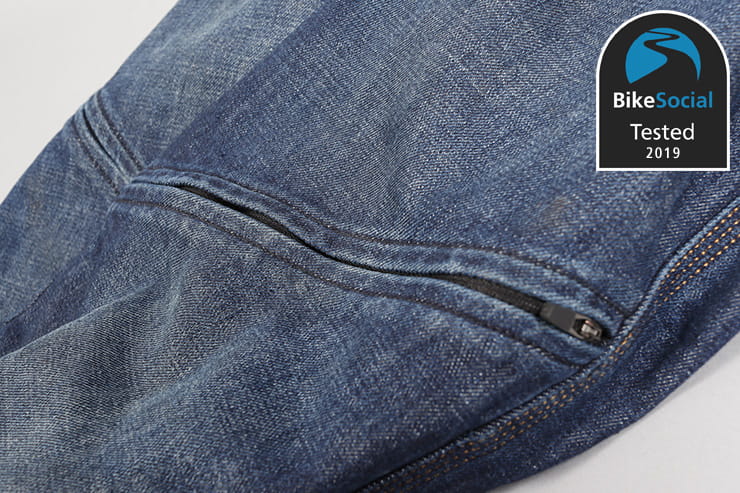 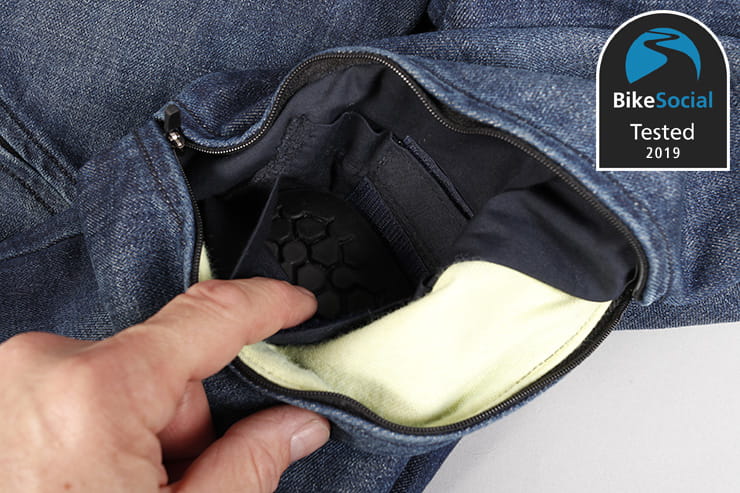 The zips slashed diagonally above the knees give access to the armour, the idea being that you can slip it out and have more ‘normal’ looking jeans. Unfortunately it’s impossible to get the armour out while you’re wearing them, so I’d have preferred not to have the zips spoiling the styling.

That knee armour is adjustable between two positions – it came in the higher position, which I found had it sitting on top of my knees when riding, rather than in front of them, leaving my shins more vulnerable. By dropping it to the lower pocket, the fit was a lot better, but they still felt good to sit at my office desk or walk around in.

Of course, these are warmer than normal denim, but being part-lined with para-aramid fibre, they’re not quite as hot as a fully-lined pair. DuPont’s Kevlar is a branded para-aramid – while many people refer to bike jeans as ‘Kevlar’, it’s like calling your Dyson a Hoover.

There’s no mesh liner between your skin and the aramid – this is usually found on CE-approved jeans as it helps reduce the tearing force against your skin in the event of a slide. 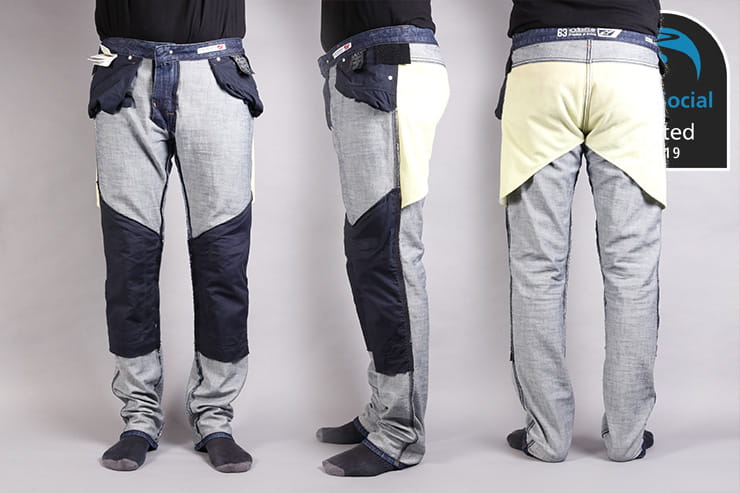 Worn inside-out, you can see the aramid lining on the bum. The blue patches at the knees cover the same protective lining.

The part-lined design of the AlpineStars Copper Out jeans means that they’re not going to offer the same level of protection as some fully-lined pairs. Only the bum and knees are covered, so sliding on your front could result in the denim wearing through, exposing the skin. This is less likely, but you do need to consider how and where you’ll be riding to decide if you’re happy with a reduced level of protection.

The denim used in construction is fairly thick – better than many others – so I sometimes wear these for the city commute. On faster and longer rides I prefer to trust my fully-lined Hood K7s, which while a little warmer, do inspire a lot more confidence. 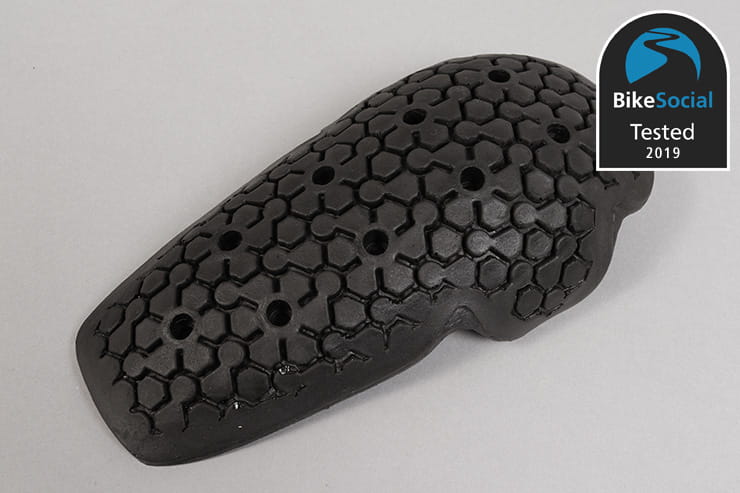 The supplied knee armour is comfortable on and off the bike.

The supplied knee armour is approved to CE Level 1 (2 is the top, but it’s invariably thicker), ad once adjusted, sat well on my knees with little movement. While the website references removable hip armour, none is supplied – only Velcro flaps at the sides hint of this being a possibility. The construction section of the website also talks of a ‘leather patch’, but this isn’t for abrasion protection – it’s the AlpineStars patch on the waist band.

The aramid in the bum doesn’t go down very low, or wrap far around your hips – while it’s likely to offer a reasonable level of protection in the average slide, some other part-lined jeans (like the Draggin Rebels) do cover more of your cheeks and upper leg. Keep in mind that the liner can also ride up, so the longer it is, the more it can protect you. It also doesn’t wrap as far around to the front of the hip as some others. 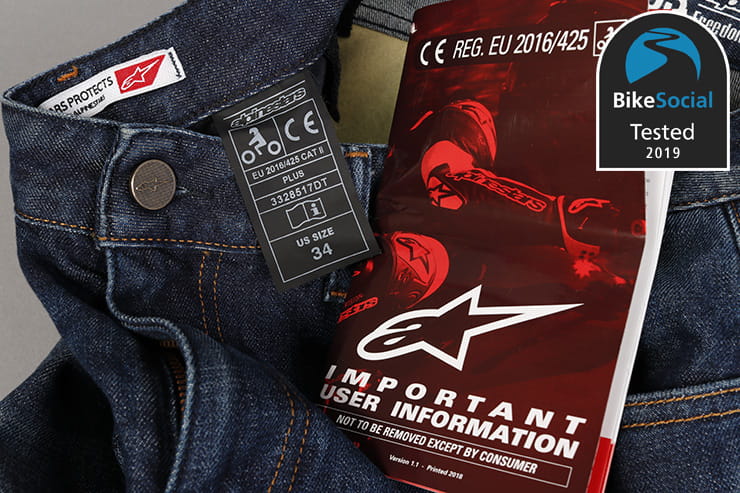 The CE labelling on these jeans was a little confusing, but AlpineStars has been regularly updating the supplied paperwork, while the PPE requirements have been updated.

It’s good to see that the AlpineStars Copper Out jeans have been tested to the requirements of PPE, meeting prEN 17092 level A (AAA is the top rating). 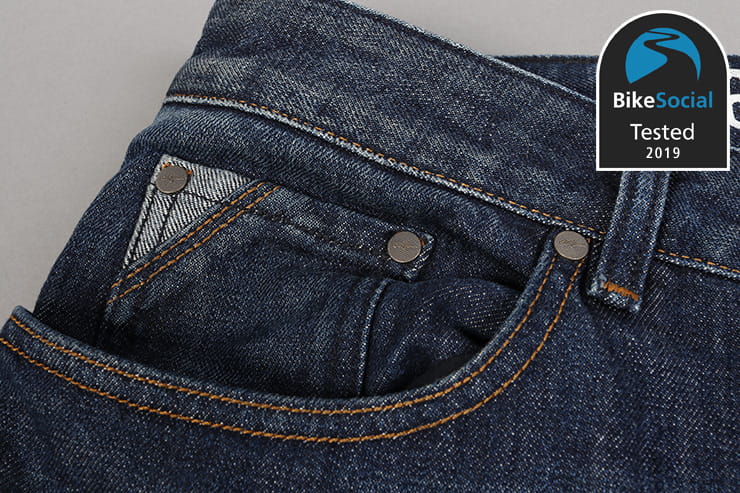 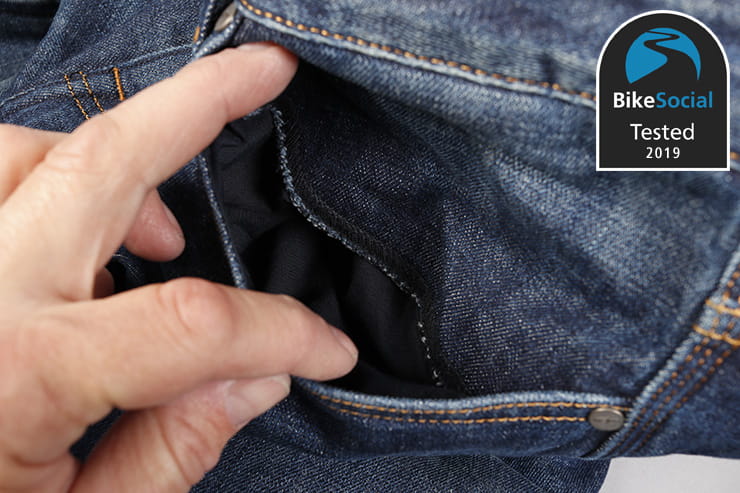 The two main front pockets (with a coin pocket on the right) and two on the rear mean there’s plenty of space to store your gear. As always, be careful what you put in the pockets, as it’ll be between you and the road if you did come off. I put my keys in there, but know it’s a risk.

The front pockets are linen, so will wear like ‘normal’ jeans; an all-denim pocket would offer the longest life span. 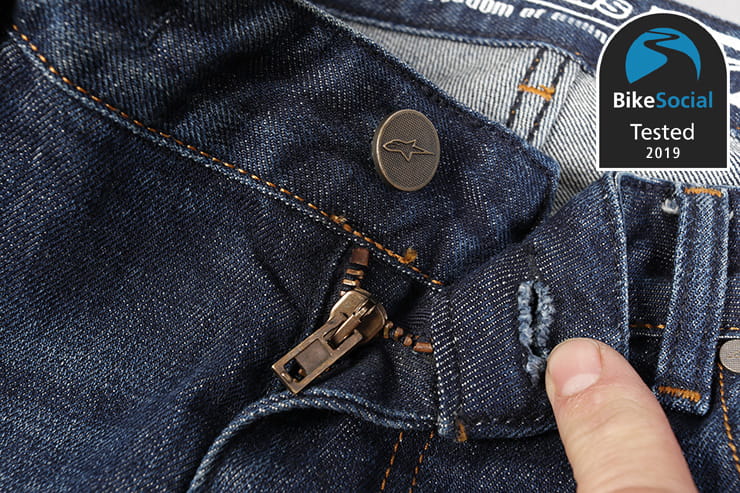 The large button above a metal fly secures the Copper Outs well – the AlpineStars branding here and on the two rivets used in the construction will be a selling point to some more brand-conscious buyers.

The rivets are flat, which is better than those that poke out in the middle as there’s less chance of them scratching the bike, though note that some manufacturers use a domed design, to eliminate even the small edge found here. There’s no rivet at the base of the fly, to avoid damage to your tank. 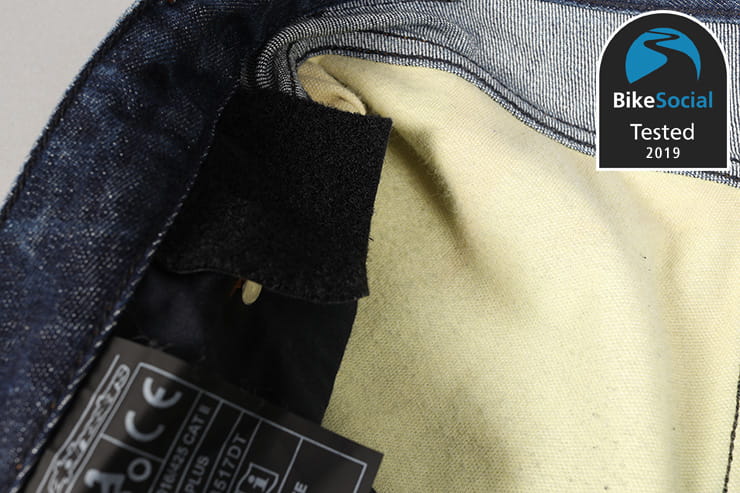 Apart from the aramid inserts, there’s no liner in the bum of these AlpineStars jeans, but there is at the knees. While this reduces bulk, an airtex mesh can offer good temperature regulation, and further help protect the skin in a slide. 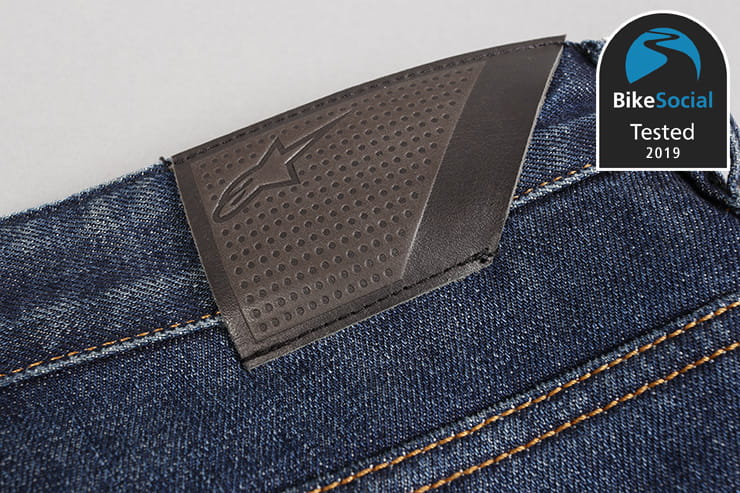 These jeans look good. Despite the zips above the knees, and the additional bulk of having two pockets for the armour, they look fairly close to ‘normal’ jeans, but other (fully lined) jeans can also manage this look without the zips.

The AlpineStars Copper Outs have the benefit of being a little cooler in hot weather, and a little more light-weight than some others, but this has to come at the compromise of protection.

These are great for shorter rides, and I will continue to wear them when I don’t need waterproof kit for the trip to work. But anything faster and longer, I’ll still opt for the protection of something fully-lined.