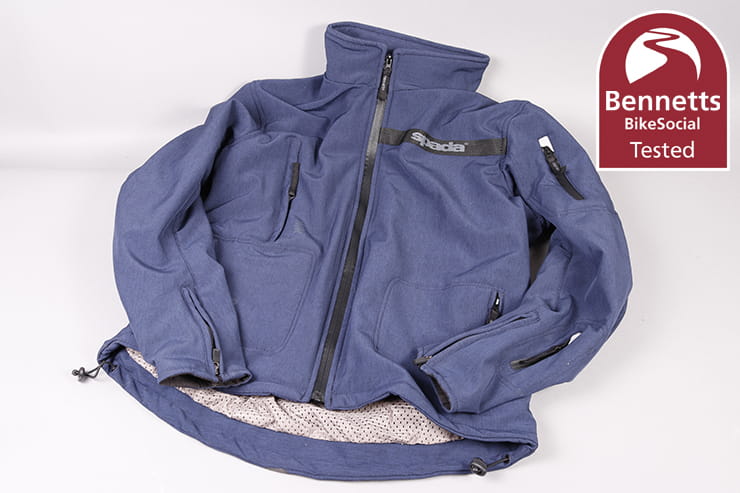 The Spada Commute jacket and trousers on review here are budget-priced kit designed primarily for the urban commuter. I wore it for a review of the Super Soco CPx electric scooter, but liked it so much I ended up using it through summer and into Autumn on the Royal Enfield Interceptor 650, Super Soco TC Max and my Africa Twin.

Typically riding around the city when I’m going to be on and off the bike all day, this is what I thought of it… 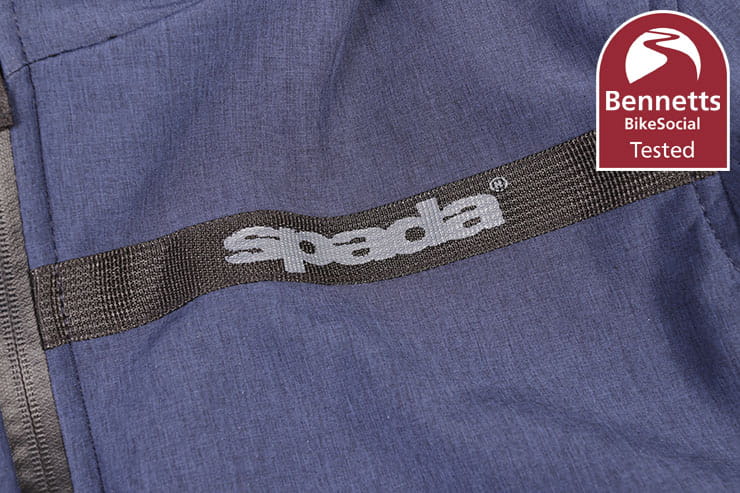 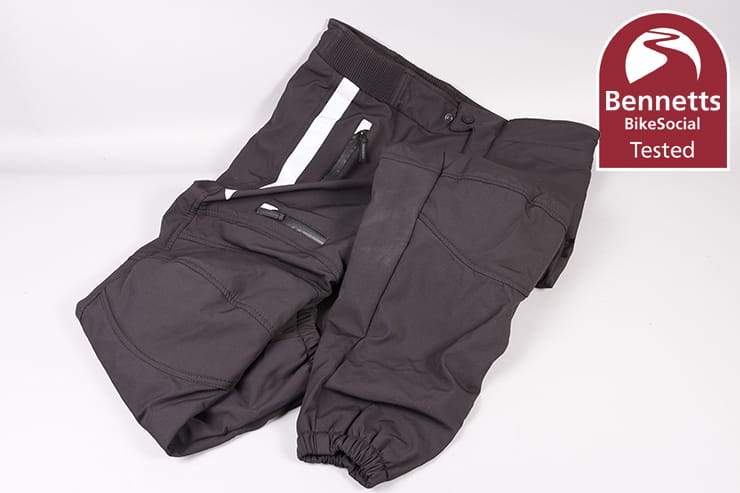 It’s subjective of course, but I love the look of this soft-shell jacket; short around the waist but cut a little longer around the back so that when you’re sat on a bike it still provides protection from the elements. The sleeves are the length I like them; just right to wear alongside a shorty glove. I’m an XL and the jacket fits comfortably.

The trousers on the other hand are an acquired taste. Made from the same soft-shell material – 97% Polyester and 3% Spandex – they’re really comfortable but the cut on the leg combined with the elasticated ankles is a defined look. You might like it, I don’t; the trousers almost roll up above the boots I wear. 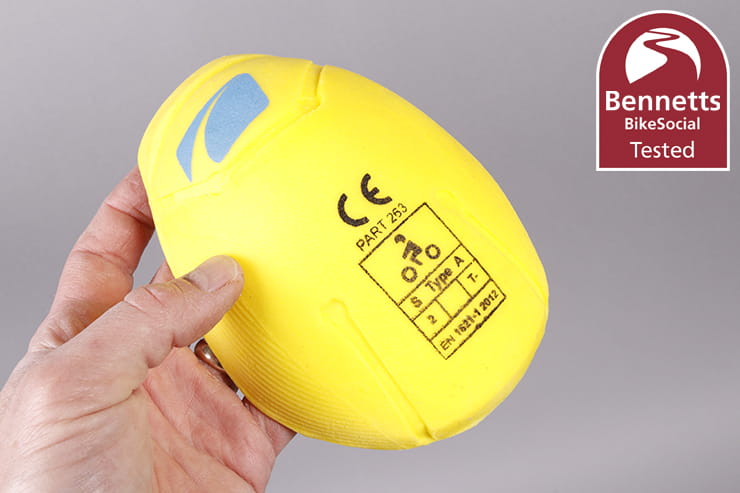 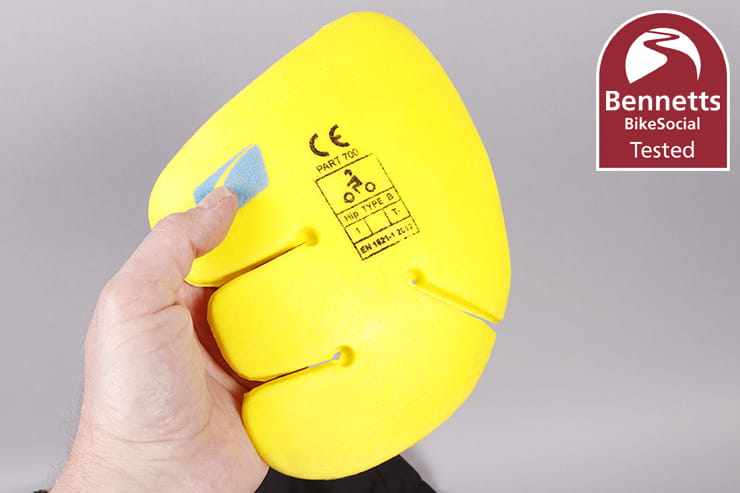 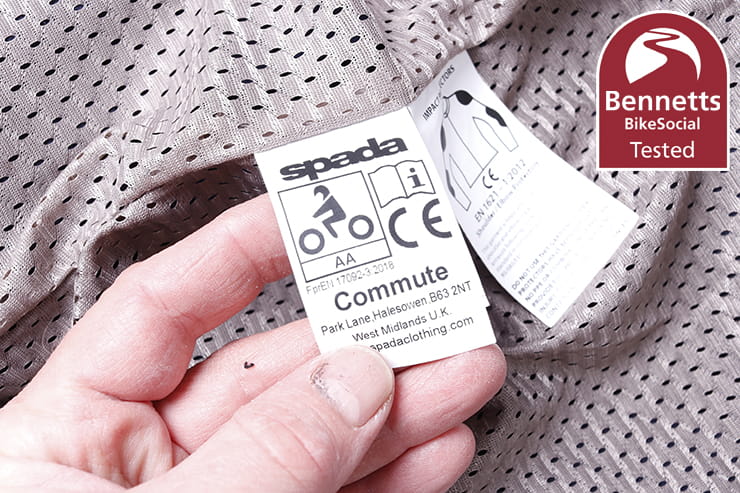 Both the Spada Commute jacket and trousers are CE approved with an AA rating, which is pretty impressive compared to some other textile kit on the market. AAA is the top rating under the new system, while A is the bottom.

The Commute jacket and trousers also come with CE Level 1 armour in the elbow, shoulders, hips and knees. There’s no back protector supplied, which isn’t surprising at this price point, though there is a pocket for one – we’d always recommend one, so see if your dealer will give you a good price on the £19.99 Tekto from Spada. Still, even at a total of £99.98, the Spada Commute jacket is well-priced. 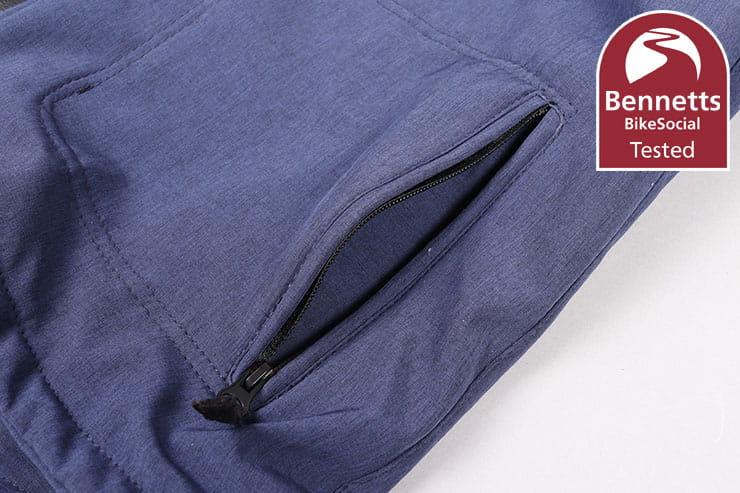 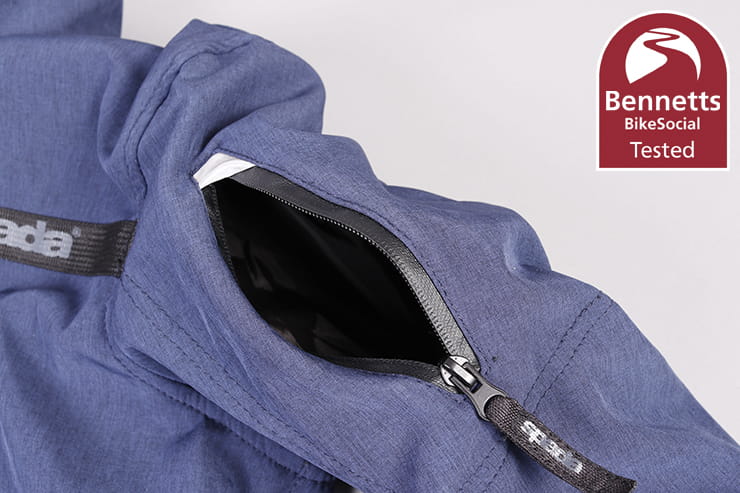 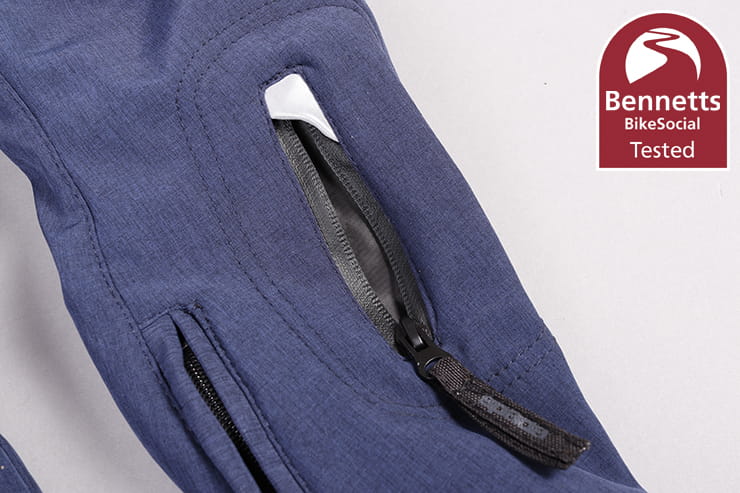 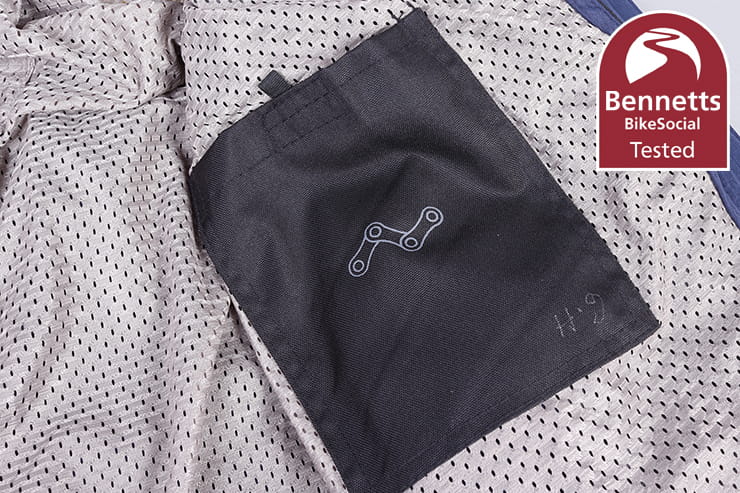 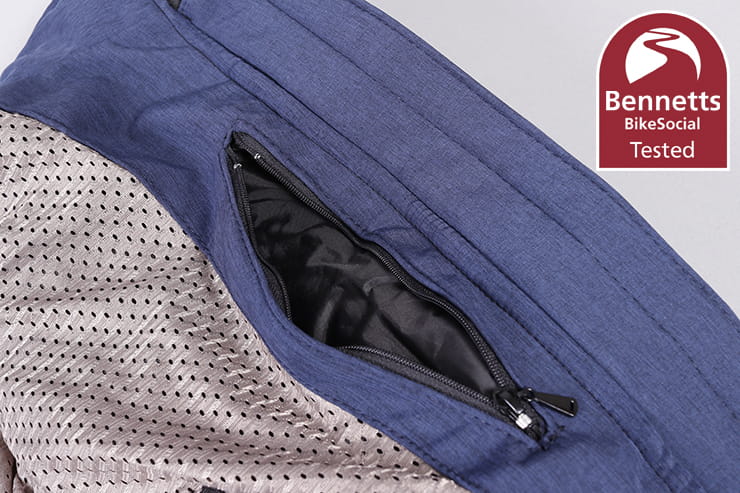 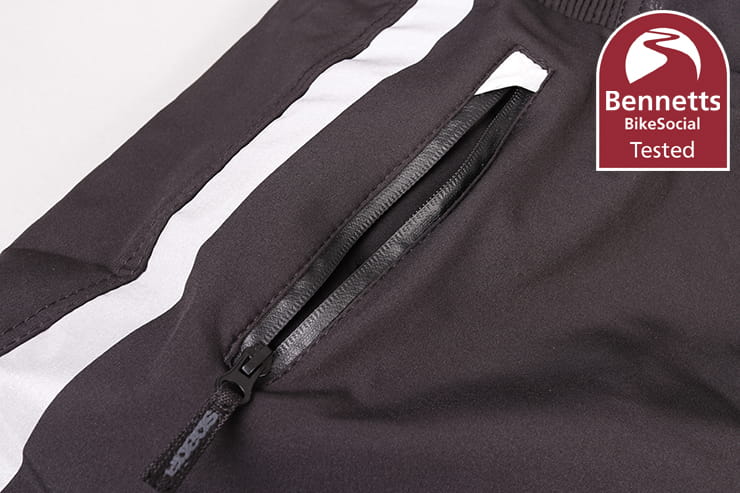 The Spada Commute jacket comes with a couple of pockets on the front that are zip closing and waterproof lined, along with a pair of smaller pockets on the left arm that get the same waterproof inner. Inside there’s another zipped waterproof-lined pocket and a pouch-style pocket, which is kept closed by a small strip of hook and loop and is attached to the inner liner.

The trousers have a pocket on each leg up on the front of the hip. They’re waterproof lined, big enough for a bit of cash and closed with waterproof zips; in fact, every zip on the outside of the jacket and trousers has a waterproof membrane over it. 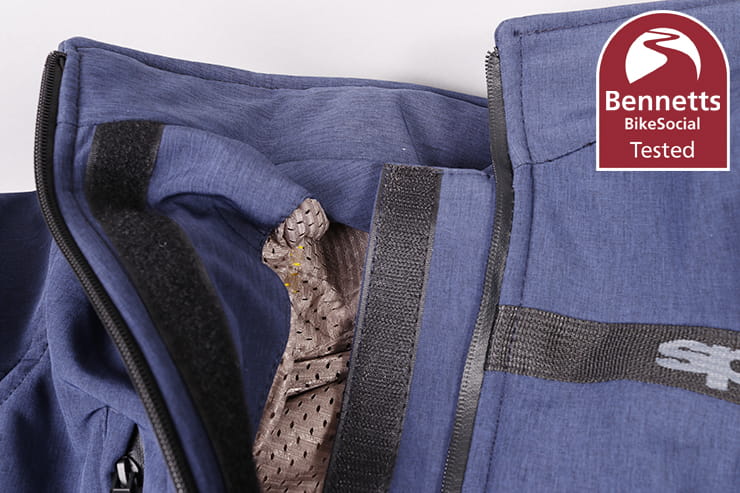 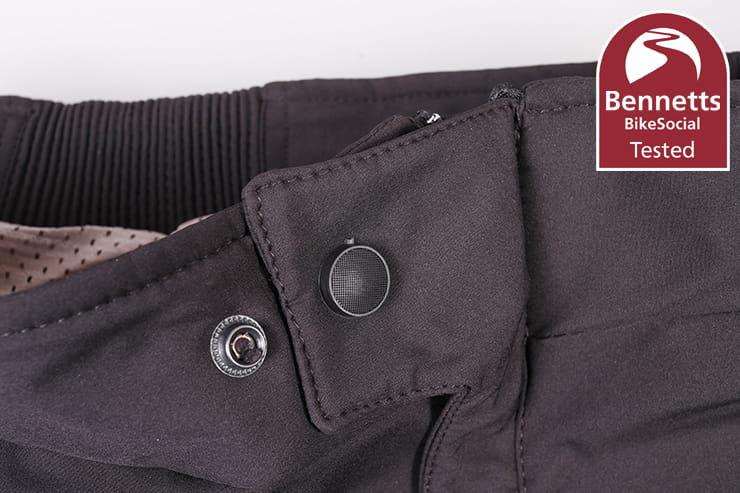 A full-length zip up the front of the jacket is reinforced with a similarly long length of hook and loop, and the trousers have a fly zip covered with a flap, which forms part of the fastening for the waist. The waist is fastened with a press stud and the whole setup is as simple as it gets but it works, really well; the hook and loop on the jacket, like an annoying tune, is particularly strong and catchy. There’s also a short zip at the back of both the jacket and trousers to attach them together. 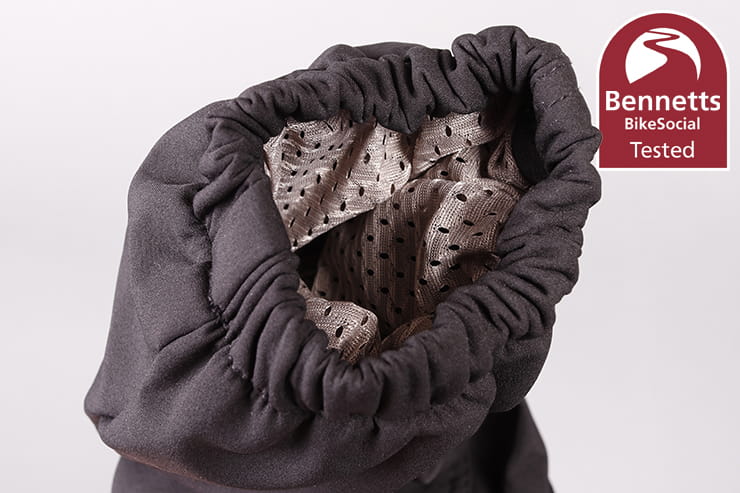 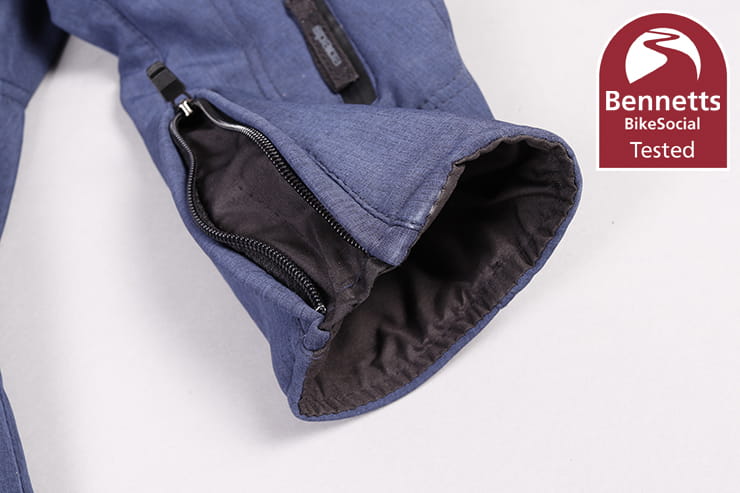 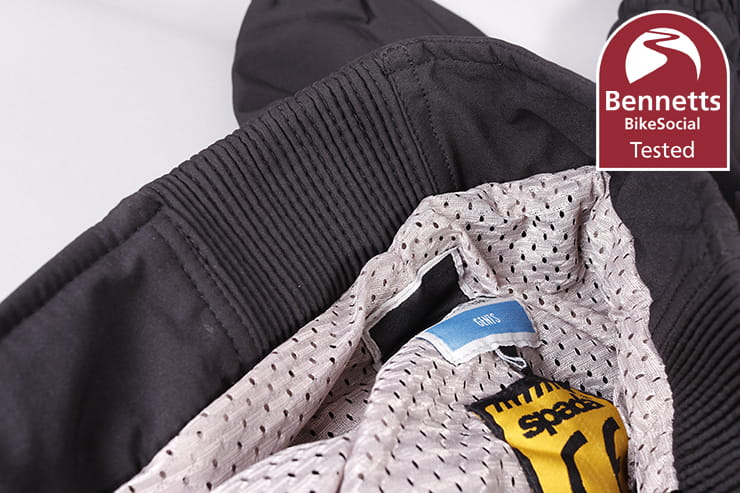 For the trousers you get elasticated ankles (did I mention I didn’t like them?), along with three stretch panels around the waist. There are two positions for the pop studs to fasten and that’s it. Despite me not liking the style, I managed to get a really comfortable fit around the waist and, combined with the soft-shell material, they’re comfortable all round.

The jacket gets a drawstring around the waist and a small amount around the cuff; simple an effective. 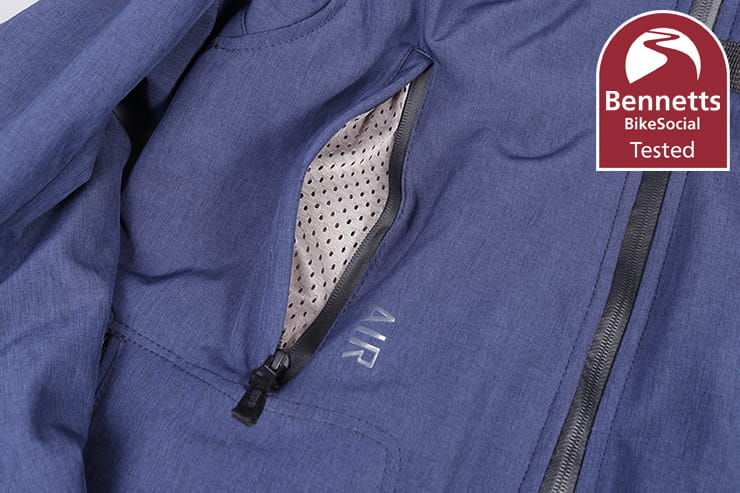 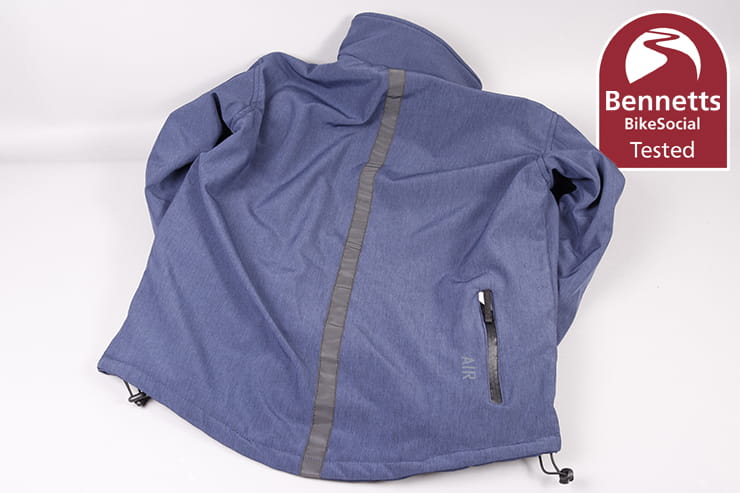 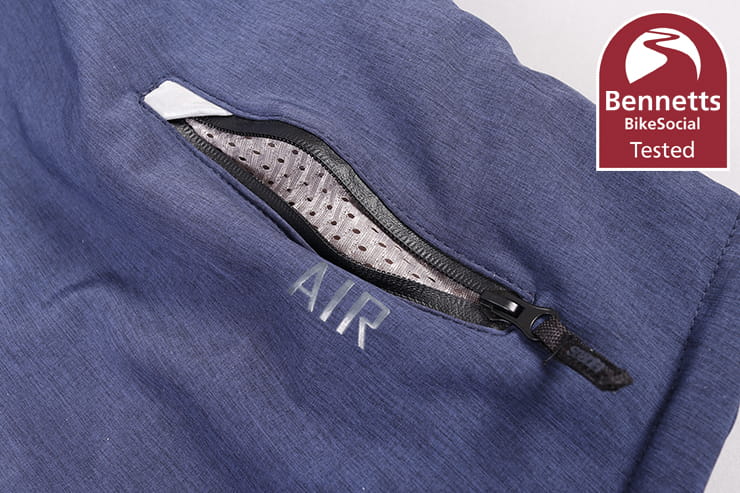 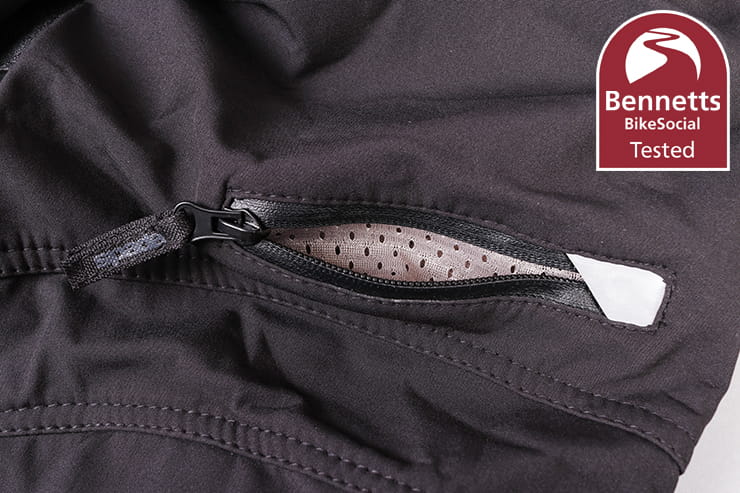 Despite the material being called soft shell, this is pretty weighty-feeling motorcycle gear designed, I think, with city riding in mind where speeds are never going to be high enough to provide airflow through the vents. The vents on the jacket are limited to a single front inlet on the chest with a 20cm opening and a 15cm outlet low down on the rear. On a warm city day, I didn’t get any airflow and made do with undoing the collar a bit. The trousers get a 10cm opening on each leg – again they’re pretty useless with airflow. 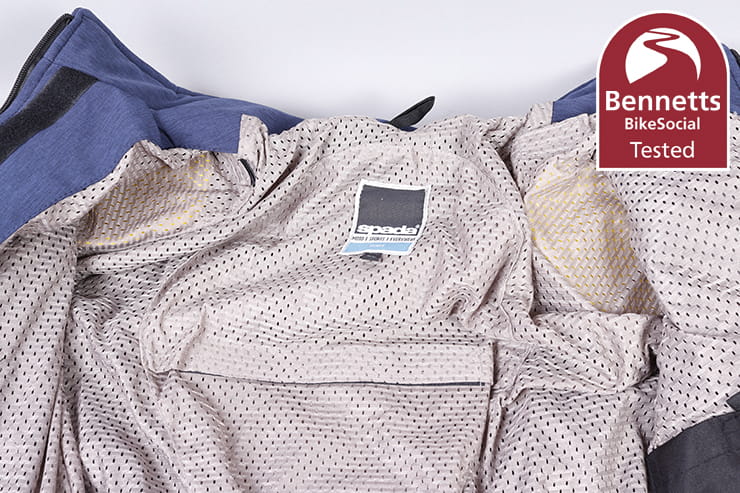 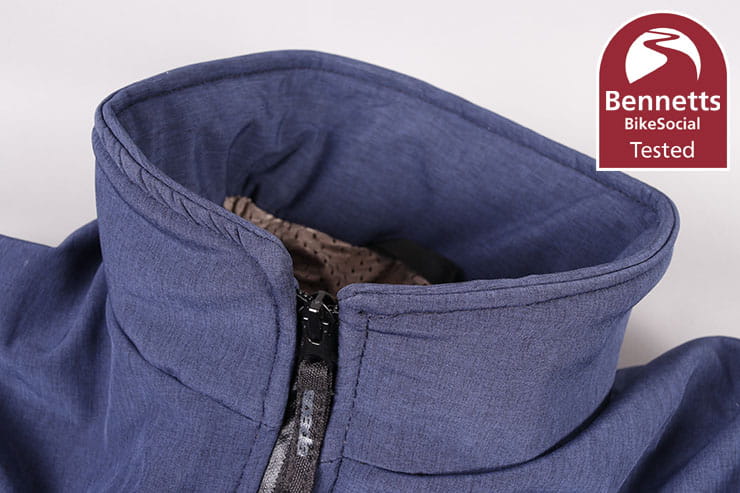 There’s no thermal liner with the Spada Commute

These were more than up to the job of even autumn riding; the polyester material and waterproof membrane does a good job at preventing airflow. The high collar is made from the same soft-shell material as the rest of the jacket and fits snugly around the neck. I had no issues with keeping warm in them on cool autumn days or into the evening.

In deeper winter you’re going to need to layer up, but it’d be worth wearing this with an oversuit for the worst weather.

There’s a non-detachable liner throughout that also holds the CE approved armour. Soft to the touch, it doesn’t irritate my skin when wearing a T-shirt.

The Spada Commute’s waterproof membrane kept me dry when I rode around the city in showers. On a two-day event riding Royal Enfields around London, I felt confident enough to leave the jacket on during the first drizzle-laden day, and only put an oversuit on during the second day when it became torrential. The pockets kept things like my phone dry and for everyday riding when the weather is a bit changeable, I never felt as though it would let me down or that I’d get soaked.

The Commute isn’t true all-weather kit for every extreme, but a simple oversuit, like Spada’s £39.99 Eco, will get you through the worst weather. 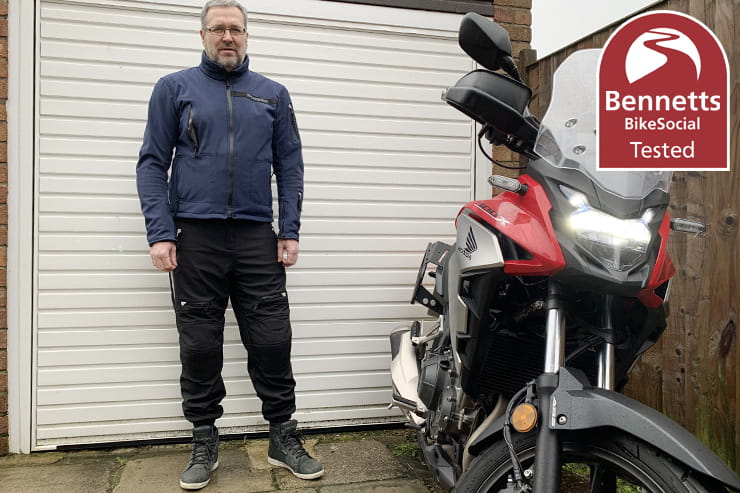 Comfortable, shower resistant and warm – especially with the collar zipped right up – the Spada Commute is great for when you just want to use the bike and look casual. It’s not for when you go on a racetrack or embark on a massive adventure; it’s designed for going to the shops or visiting mates. Or urban commuting of course.

I’d not bother with the trousers as I don’t like the style, but teamed up with armoured jeans the jacket was excellent; definitely recommended even if priced up with an optional back protector.