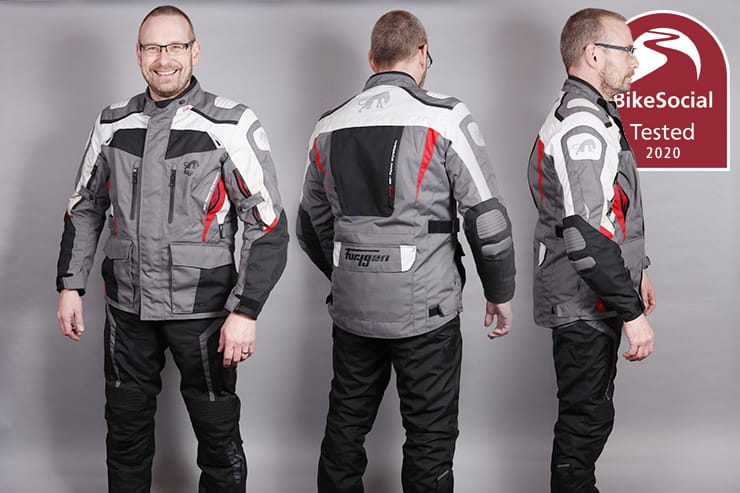 The Furygan Apalaches waterproof textile jacket and trousers on review here are designed for all-weather motorbike riding. The jacket is also fully-compatible with the Fury Air Bag system, which uses the In&Motion controller, tested and explained here.

I’ve been wearing this kit on a BMW S1000XR, Kawasaki Versys 1000 and 1999 Kawasaki ZX-6R in all weathers during winter and well into what was the sunniest spring on record...

Fit is of course extremely subjective, so like any motorcycle kit (not least helmets) you should always try it on before you buy. However, to give you an idea, I’m 5’10” and a fairly average build at 87kg. The Apalaches jacket and trousers give a very comfortable and snug fit when they’re on with the liners, but take some wiggling over my hips; while it’s excellent that there’s very little slack to bunch up and cause a potential failure point in a crash, this gear isn’t cut for a generous Brit; where Large generally fits me just fine, the French cut of this suit is a little on the tighter side for my proportions.

Braces are supplied, which is a handy extra, though the plastic buckles can feel a little uncomfortable under large rucksacks as they press into the collarbone. The braces are easy to remove if you don’t want to use them.

One grumble I do have is that the high waist design means that – with the jacket zipped to the trousers – there’s no room to get your John Thomas over the waterproof gusset behind the fly when you need a wee. 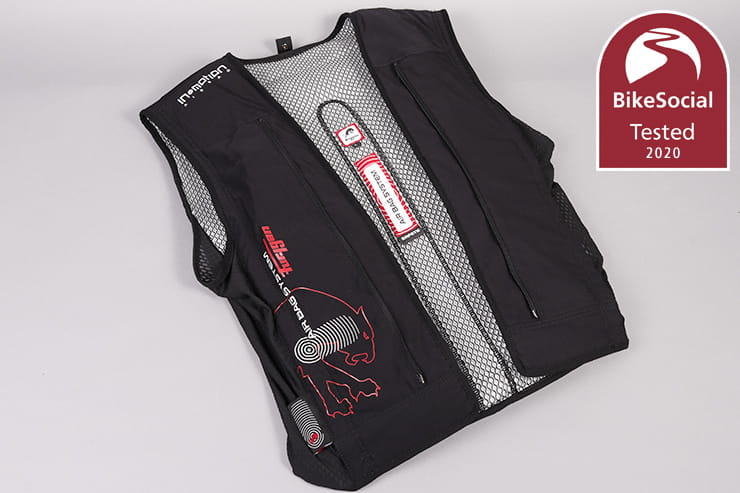 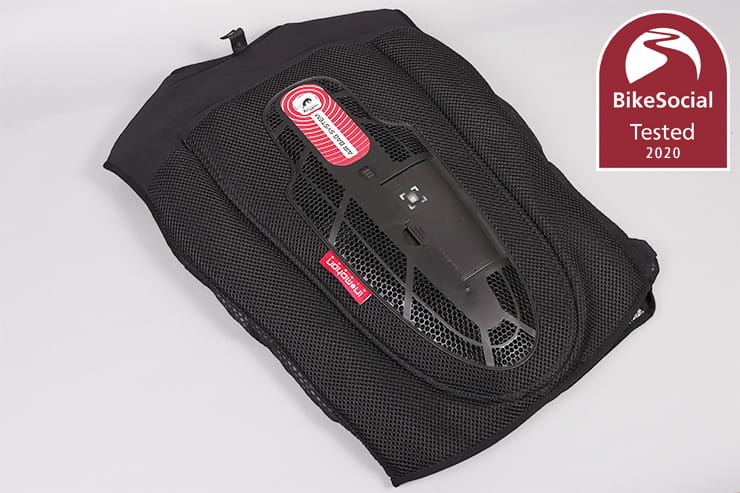 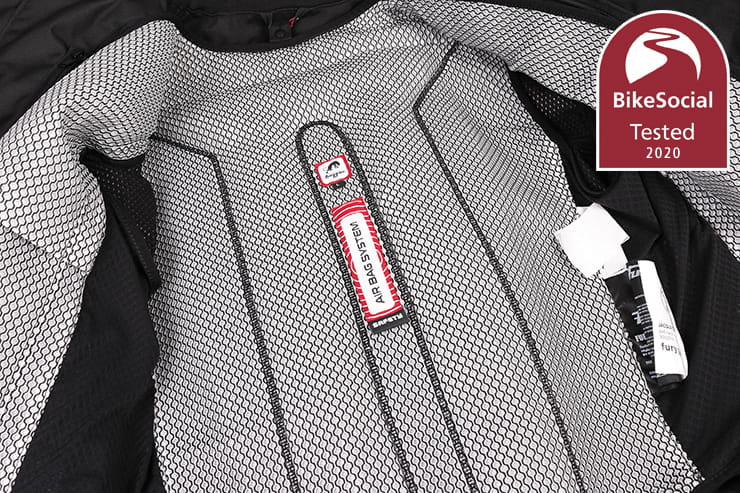 The Furygan Apalaches jacket and trousers are CE-certified using French standards, but put simply they meet CE Level A. This is at the lower end of the protection on the market, but you can read more about the testing standards here.

Given the relatively low price, it’s great to find D3O CE Level 1 armour in the elbows, shoulders, hips and knees, which makes for comfortable, unobtrusive protection. There’s no back protector supplied, but you can easily fit an aftermarket one, like the D3O BP4. Importantly, the Apalaches is part of the range of Furygan kit that’s designed to be used with its Fury Air Bag Vest system, which offers a much higher level of protection to your back, neck, shoulders, collarbone and chest.

The vest system costs an additional £379.99, but it can be fitted in a variety of Furygan’s kit, so buy it once and you can use it in the company’s compatible one-piece leathers, leather jackets and other textiles.

The vest uses the In&Motion control box, which is reviewed and explained here – this adds an additional £120/year subscription cost (or £399 one-off purchase), making these textiles a far more expensive proposition, but remember that the vest is transferable between other Furygan kit, and if you do have an accident, this vest is unlikely to be damaged and can be recharged at home, then zipped into your new kit. The Fury Air Bag vest is not currently compatible with any other brands of jacket, though we have heard a rumour that Furygan will at some point be releasing a connection panel that zips onto the front of the vest and – like the Ixon IX-U03 universal vest – will allow it to be worn under other gear.

The Fury Air Bag vest includes a CE Level 1 back protector, and once deployed the back inflates further, as well as offering excellent protection across the top of the shoulders, the neck and right down the chest.

While the jacket is snug, fit isn’t compromised by using the vest, even with the thermal liner installed. Also, thanks to the 3D mesh of the vest, air is still able to move around the body, though of course the vents are a bit less effective.

I’ve used the In&Motion-controlled airbag system in this Apalaches and the Vince leather jacket, and while it is a large investment, I can honestly say that it’s a superb piece of kit that gives real confidence. The control box is universal too, so can be used in other brands’ implementation of the technology. 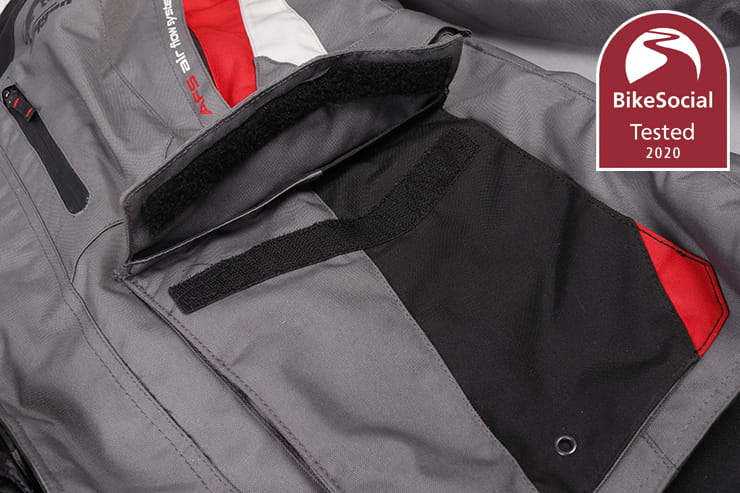 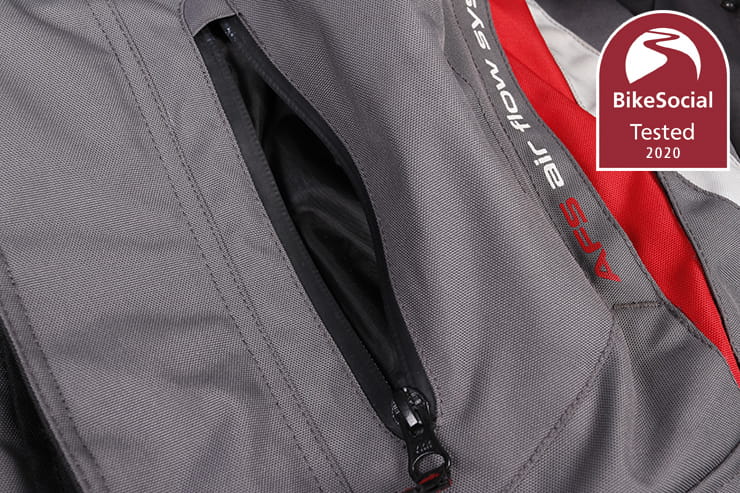 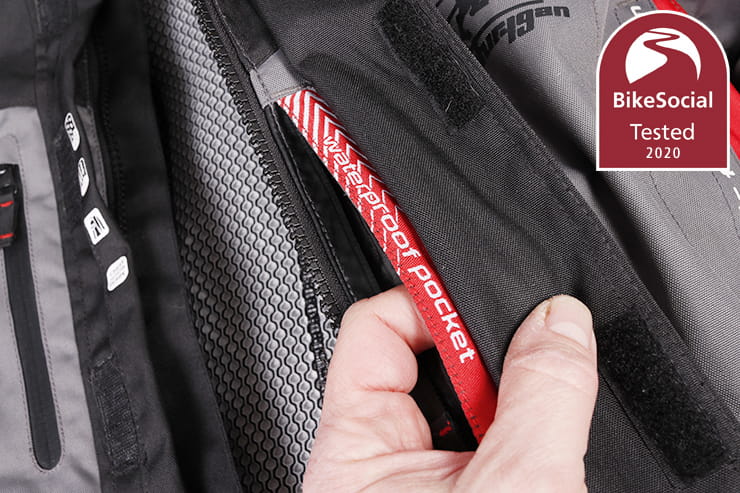 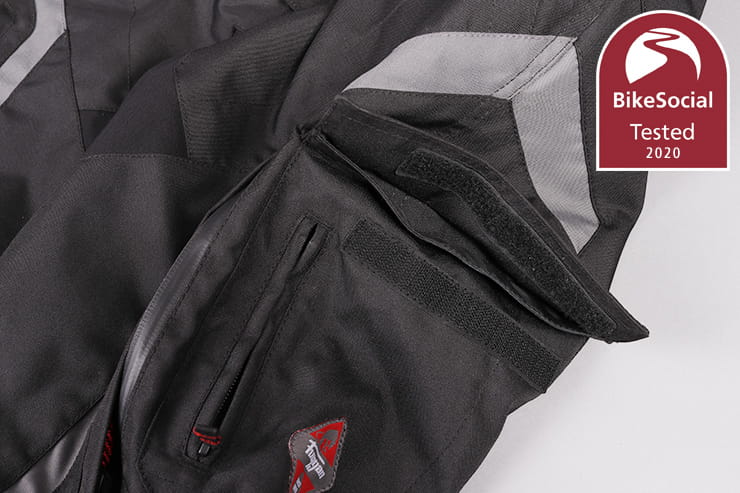 The jacket has two good-sized Velcro-flap-fastening waist pockets, a zipped pair on the chest and a map pocket on the rear. Under the zip is another pocket at the chest (a ‘Napoleon pocket’), and if you don’t use the thermal liner or the airbag vest, you’ll also have access to two more inside.

The trousers have a pair of reasonably-sized hip pockets, though thanks to the snug fit I can’t get much in these (I usually only use jacket pockets anyway), as well as a small zipped pocket and a larger Velcro-closed one on the left leg.

In what seems a bit of a design faux-pas, the jacket’s waist pockets each have a rivetted hole at the bottom, which is handy only to let the water out that these holes themselves let in. While the Napoleon pocket behind the zip is the safest place to keep your phone, it soon bulks out, and most other jackets I’ve used keep my phone, wallet and other detritus dry enough in the outer pockets. 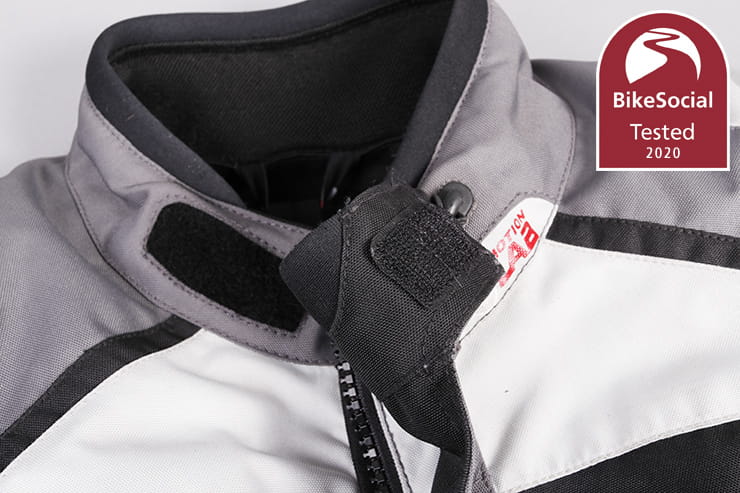 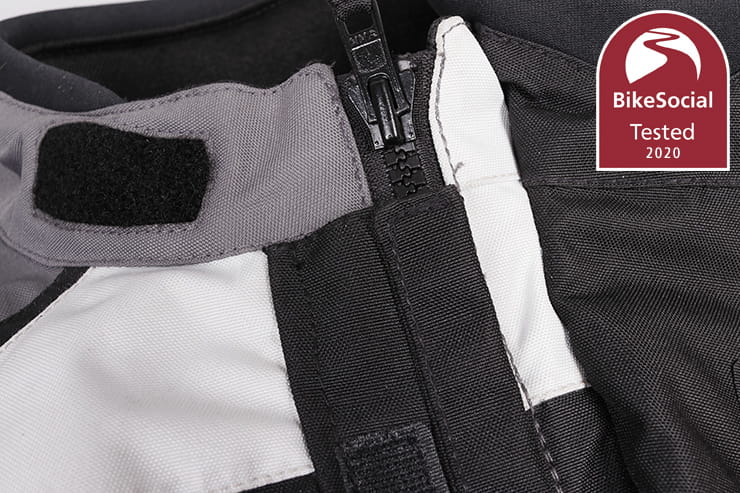 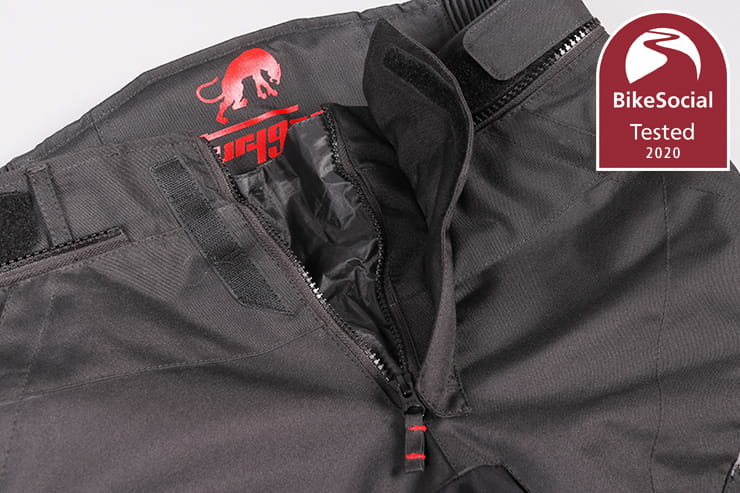 The main zip is chunky and easy to use with a tough fabric toggle, while the connecting zip between jacket and trousers is equally accessible.

The fly has another good-sized zip, but there’s no popper or catch at the top – just Velcro – so if you have a tight fit around the waist the zip can start to slip down if the lock hasn’t caught fully. 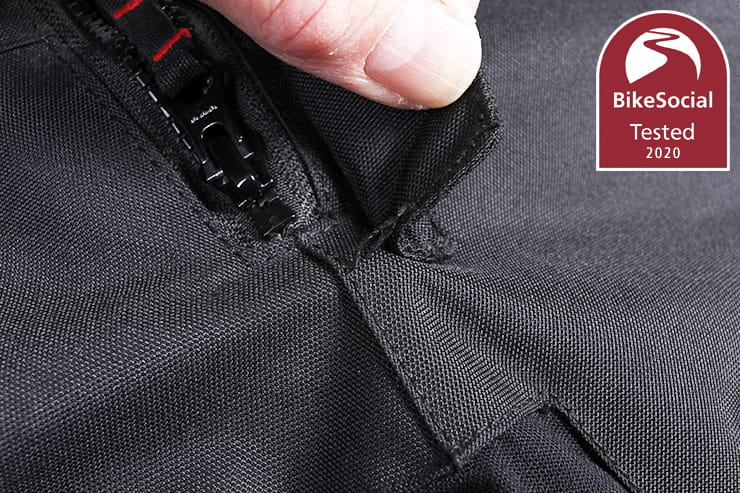 The stitching on the bottom of the fly zip cover came undone pretty quickly on my trousers – this stopped spreading and hasn’t caused any problems, but it’s a small area that could have done with some reinforcement.

Velcro waist adjusters allow you to cinch the jacket in, while two-position popper straps on the arms can tighten against the biceps.

The trousers have elastic on the back, along with a pair of Velcro adjusters, but there’s not much room in them; check your sizing carefully as with the Large (which usually fits me fine), I was at the limit of comfort thanks to the fact that I suffer from cake-retention.

There’s no adjustment at the bottom of the legs, so you can’t tighten them around slimmer boots. Having said that, they open up wide thanks to a long zip, then fit well over most boots.

The cuffs have Velcro strap adjusters, but unfortunately they don’t open up very far at all, so I can only just get some waterproof summer gloves under the cuffs (if I’m not wearing a watch); winter gloves are out of the question so you’ll have to wear them over the top, which means water tends to run down your arms and into the gloves unless they seal very, very well. Added to this, the sleeves aren’t very long, so I find it a little easy to stretch out and have the jacket slip from under some gloves; again, this will depend on your fit. 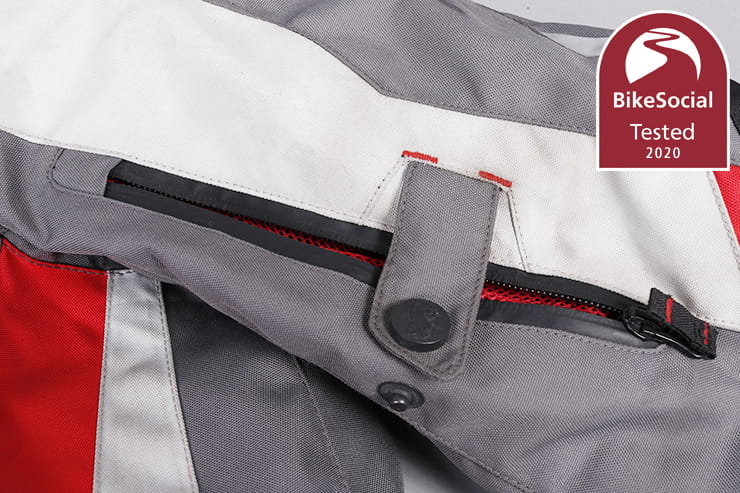 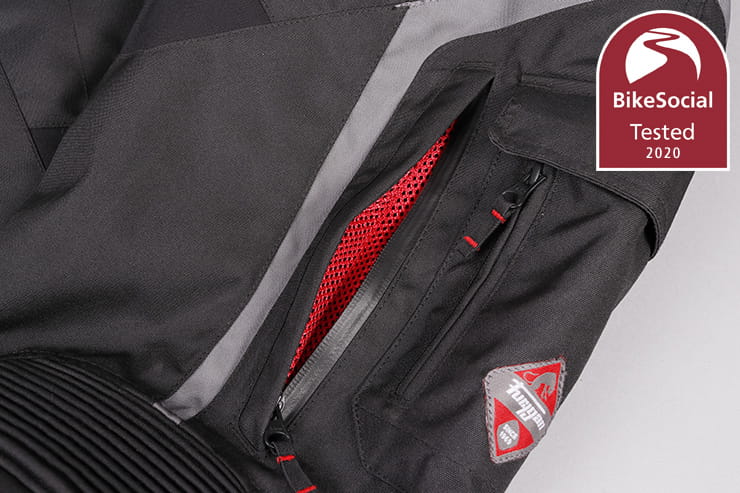 For such a relatively affordable piece of kit, the vents are quite nicely designed. Long zips at the biceps, chest and back create good airflow, and there’s also a well-positioned opening on each leg.

While the waterproof drop-liner prevents any direct-to-skin ventilation, air movement is still good thanks to the well-thought out locations and the elasticated drawstrings that pull the two chest vents wider. The adjuster straps on the arms restrict the opening of those vents – it’s a shame the strap can’t be clipped behind the vent to help pull them open – but overall it’s a good system.

Of course, adding the airbag means that you can’t feel the venting quite as much, but it is still moving warm air around your body and out of the rear vents. Also remember that a bike with a screen will restrict any garment’s vents, but here the bicep openings do let in a considerable amount of air. 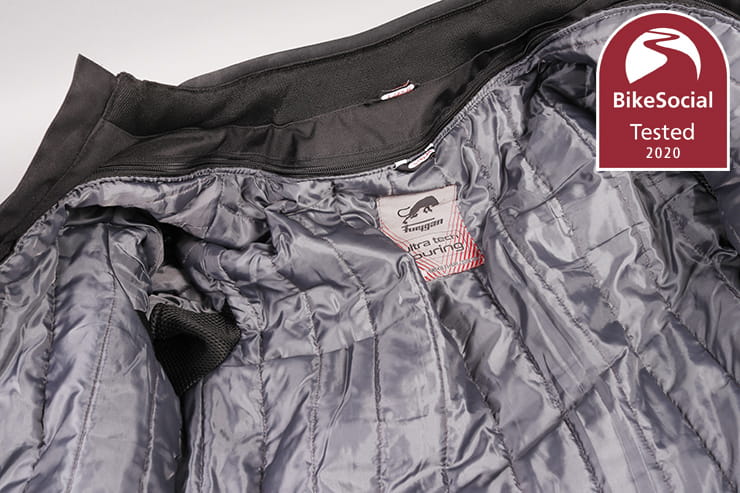 Over a 20 minute commute at 2-3°C I was aware of the chill in the air – mainly in the arms. On a longer journey of about 40 minutes at 5°C during Storm Dennis there were strong winds that could have driven into the kit, but it remained comfortable.

This isn’t the warmest gear I’ve ridden in, but it’s far from the coldest, and I only ever wear a tee-shirt in order to consistently assess the warmth; another layer would have made a big difference.

Overall, I’m happy with the performance and given the effective ventilation, this kit works well in pretty much all the temperatures the UK weather can throw at us. 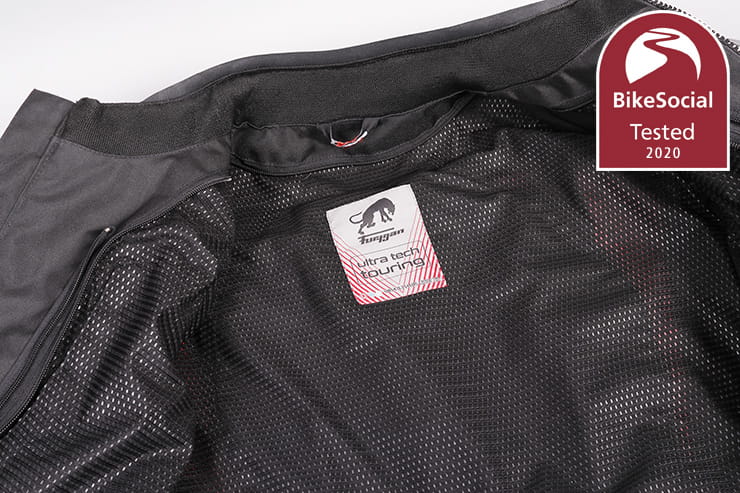 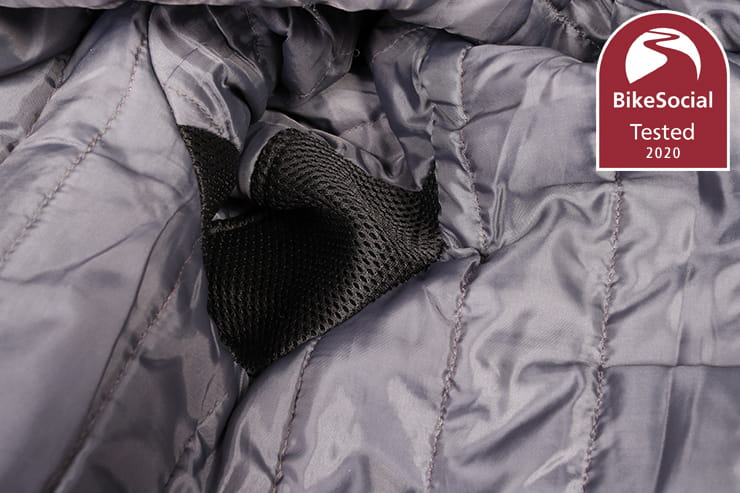 The removable thermal liner is comfortable with the added detail of a venting mesh in the armpits.

Remove this liner and the jacket’s open mesh keeps the drop liner off your skin, making for a comfortable feel that doesn’t get too sweaty. 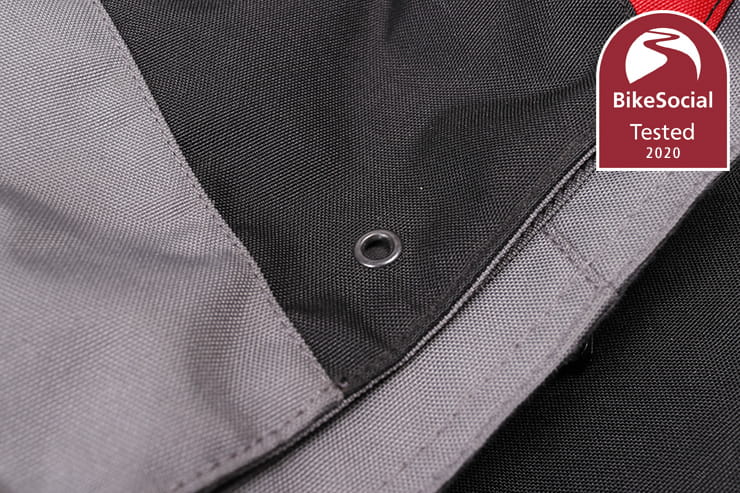 Holes in the front pockets let water out… and in

I first tested the waterproofing over a period of just over an hour in Storm Dennis on the Kawasaki Versys 1000 – it wasn’t the most torrential rain I’ve ridden in, but it was plenty wet enough.

Up until about 45 minutes in I was thoroughly impressed and felt bone dry, until my elbwos started to feel cold and wet… when I got back, despite my Held Twin gloves being fastened around the outside, the water was getting down into the end of the arms then wicking up the sleeves. 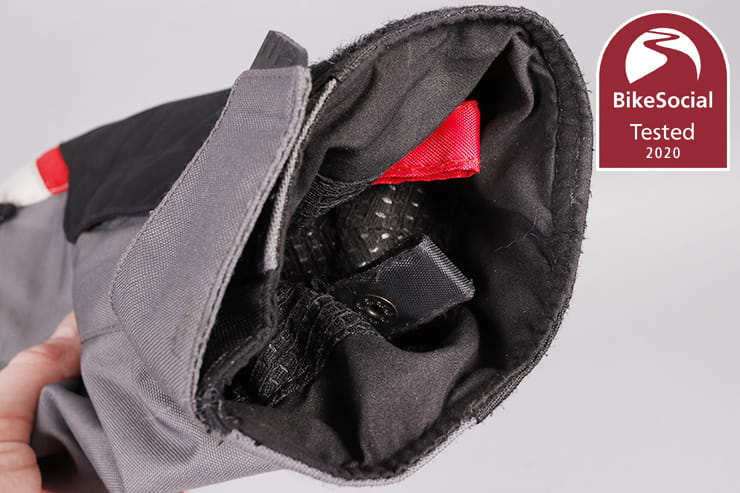 Some jackets have a plasticised liner or other material at the end of the sleeves to prevent this happening, but here the water was able to creep up. I was wearing the thermal liner, which sits a good few inches from the end of the sleeve, but this was still wet, as was the jacket liner.

Despite the high waist, I also found a pair of hand-sized wet patches on my stomach after the ride, and my wallet and phone were soaked thanks to the drain holes in the outer pockets.

After a night to dry out, the insides of the arms were still damp the next morning, and on another rainy ride from Dorset a few weeks later I found my bum got wet, though I wonder if this was more down to the liner’s inability to breath while I was sat on the bike for a few hours.

The outer material wets out quickly (becomes soaked), which can limit any waterproof liner’s ability to work – there’s clearly little or no DWR (durable water repellent) coating on the outside; a coat of SDoc’s excellent re-proofer spray would help here. 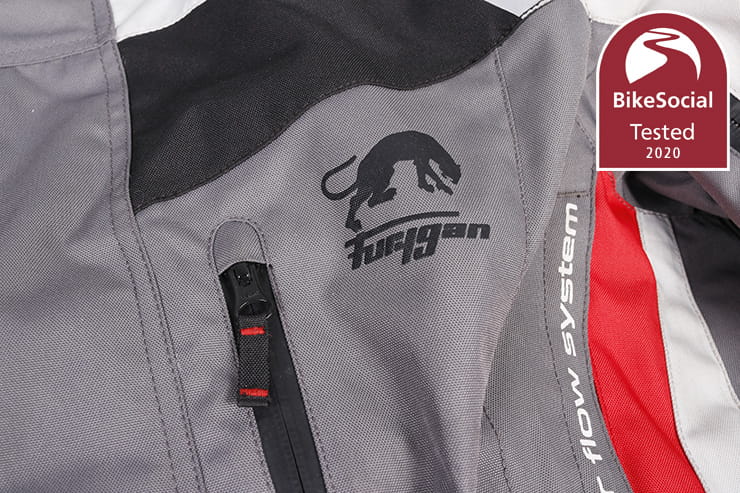 Leaving aside the cost of fitting the air-bag vest (which should be considered a long-term investment), the Furygan Apalaches is a relatively affordable set of textile jacket and trousers that have some neat design touches.

It’s in the rain that the Furygan appears more budget – this isn’t kit for long-distance wet-weather riding – and while there are some very neat details and an overall good construction, it’s things like the lack of cuff capacity and the holes in the pockets that also let it down.

If you’re rarely out in the wet then this is well worth considering, and if you’re going to stick with Furygan, the Air Vest system is an excellent option.