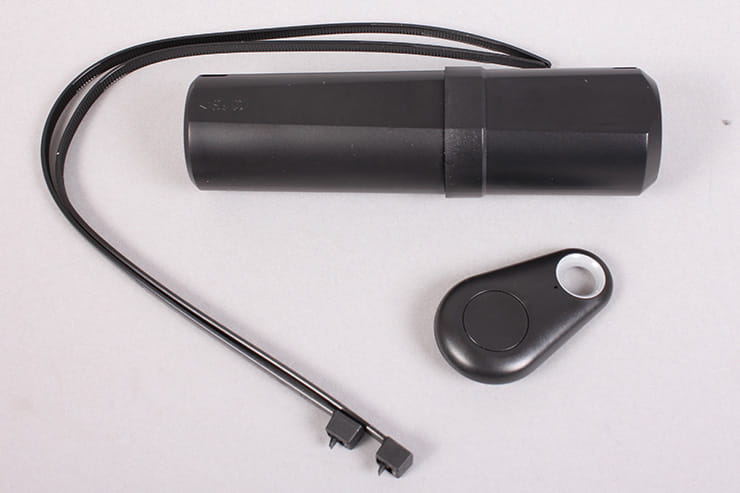 Described as a ‘smart alarm’, MoniMoto is a small, self-contained tracking system that requires no specialist fitting and no subscription (besides a SIM card). Measuring just 125mm long by 35mm in diameter – and weighing 106g – it’s a compact device that has the advantage of replaceable batteries, so can’t drain your bike’s battery.

• Monimoto calls your phone if it detects movement, then sends GPS coordinates

• IP65 rated for protection against dust and low-pressure water jets (so rain proof, but don’t directly jet wash it). The key fob is not waterproof 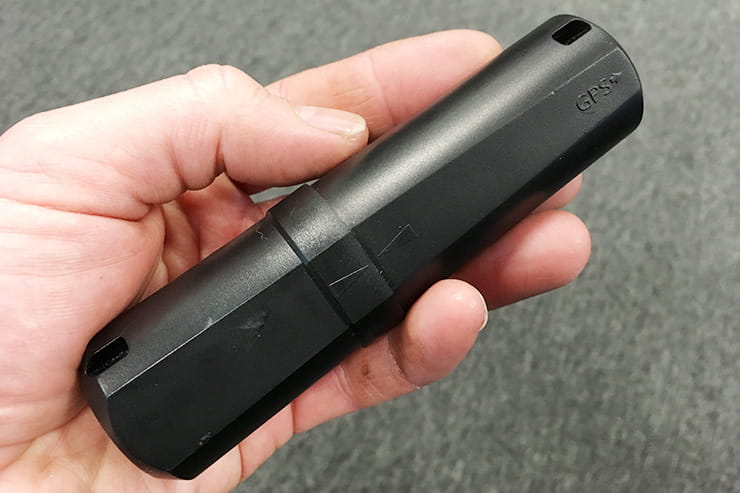 Fitting and setting up the Monimoto couldn’t be easier – its body has holes in place for zip ties (which are included), so you just need to find somewhere hidden on your bike to put it. Bear in mind that the more work it takes for you to hide it away, the less chance there is of a thief finding it. However, unlike a hard-wired tracking system, you will need to get to it again in a couple of years to replace the batteries.

It’s important that the device is orientated correctly, with the ‘GPS’ symbol that’s moulded into the case kept uppermost. I had it in the tail of my long-term-test Suzuki GSX-S750, so there was nothing metal in the way to interfere with the signal. Of course, a keen-eyed thief who’d ripped the pillion seat off could have seen it tucked away in the corner in the event of a theft.

The device needs to be connected to a smartphone – Apple or Android – but it really is easy.  A slip of paper includes a link to the app, which once downloaded guides you through the very quick steps; first the plastic insulation tabs are removed from the fob and main unit, then you click ‘scan’ in the app to pair the two. You then name the device before it checks the supplied SIM card, connects to the GSM network and is ready to go.

The SIM comes with two months of free use, then costs just three Euros a month and covers all of Europe, so the device will still work when you're away. However, you can use your own SIM if you want.

The Monimoto will only alert you of a problem if the bike’s moved when it’s not in range of the included key fob. It’s important that you don’t keep the fob on your bike keys, and not just because it isn’t waterproof; if you lost your keys with the bike, the unit wouldn’t know there was a problem amd couldn’t be tracked.

As long as you have the fob with you when you’re near the bike, you’ll not be bothered by any notifications or warnings – you can pair up to three fobs to the device, so you could have one in each jacket pocket if you wanted (they’re 33 Euros each). Cleverly, if you have more than one MoniMoto – for instance one on each bike – you can pair your fob(s) to all of them.

The fact that you can work on your bike, wash it or move it around without having to log into the app to shut the system down is a real bonus – the fob is an excellent solution, and also means that, unlike some other non-hardwired systems that don’t know when the ignition is turned on with the key, it won’t be constantly alerting you while you ride.

You do need to be aware though that the fob has quite a good range – it’s possible that if the bike was directly outside your house and got shaken while crooks tried to disable any security, you wouldn’t get an alert until it was taken out of range of the fob, costing precious time when you could have been calling the police (our shouting at the thieves out of the window).

While the bike’s in view of my work’s office window, the fob is out of range, so I’m notified quickly of any movement – one very windy day did see it being triggered, so it clearly worked. 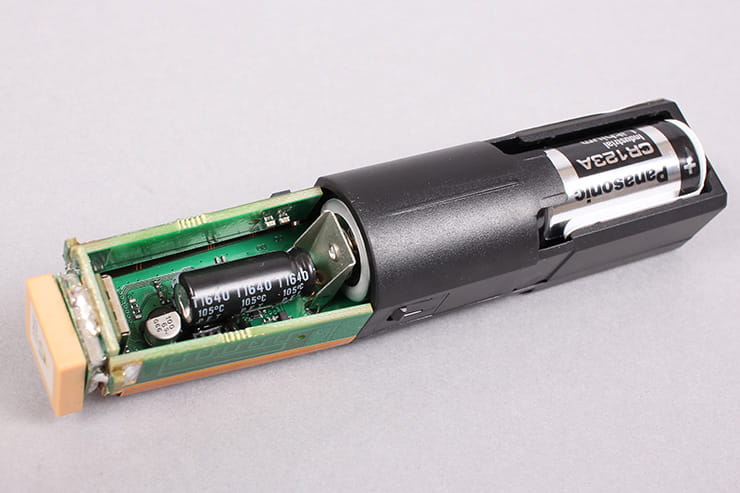 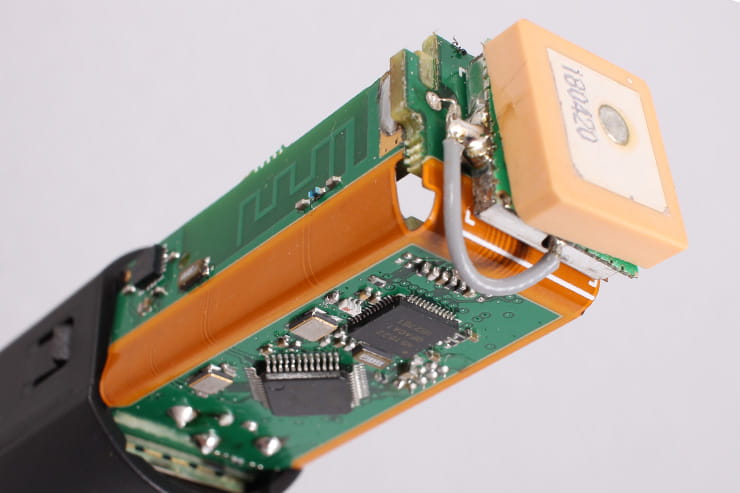 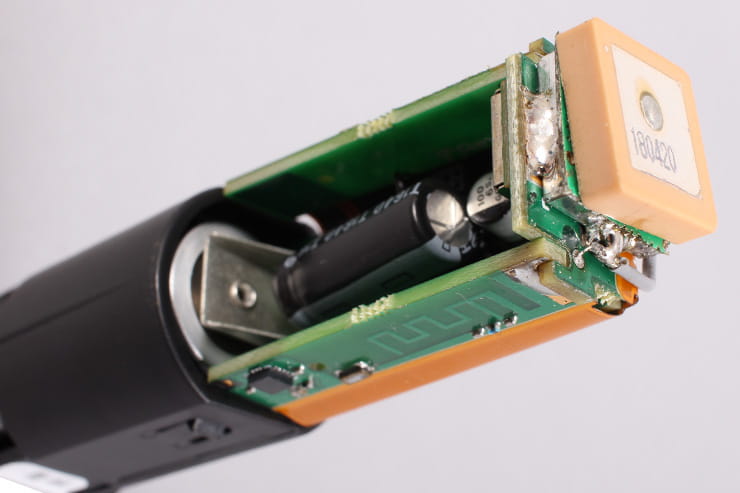 Take it apart and the MoniMoto seems well put together

When movement is detected, the device will wait 20 seconds while it checks for the fob. Within the next 30 seconds, if it decides the owner isn’t with the bike, it’ll call your phone. Using a call rather than a notification means you’re much more likely to hear it and react. There’s no message when the call’s answered, so you can hang it up without answering if you want.

Within the next 40 seconds, MoniMoto looks for GPS satellites, then sends the coordinates to the app. If it can’t get a good lock, it will attempt to use the GSM network to give an approximate location.

For as long as the device detects movement, it updates the location every five to ten minutes. Once it thinks it’s static, the updates come every 30 minutes, until the fob is detected again.

All our trackers tests are conducted in the same way – we don’t tell the manufacturer when we intend to perform a mock theft, and while we won’t waste police time to raise a crime number (if necessary for monitored systems), we expect the device (if it’s self-monitored) or operations centre to demonstrate the full service.

Level one: Stolen and left in street: Taken from outside the office, the MoniMoto alerted me of movement quickly. This test simulated it being pushed away by a crook, which was successfully tracked, the final location being show accurately, allowing me to recover the bike.

The events list in the app shows all the alerts and coordinates that have been logged. The location is shown on an in-app map, but clicking on it takes you to the phone’s own maps app – in the iPhone this was Apple maps, which had the directions to the bike from my current location already programmed, as well as the useful option to switch to a satellite view. 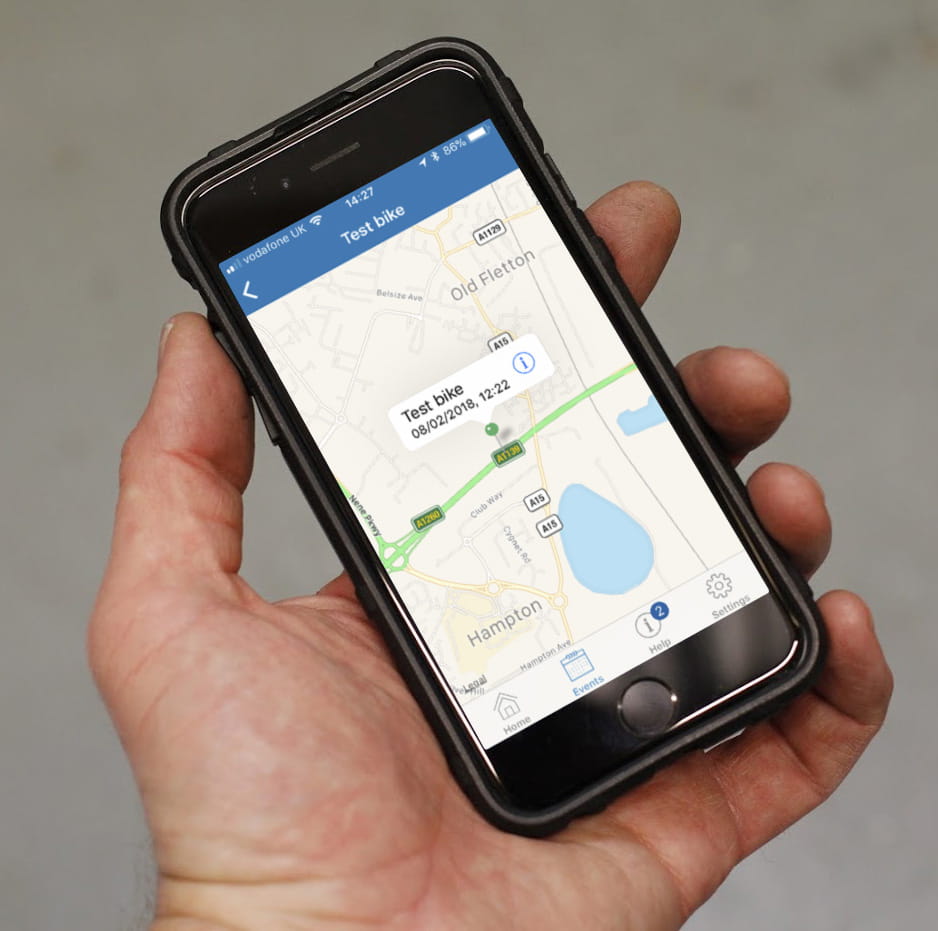 Level two: Stolen and hidden in a building: Taken from the garage in a van, then hidden in a shed, I was alerted quickly of movement, but the location while in the van was only given by GSM, the GPS not getting an accurate fix. This saw the pinpointed location as off the road it as actually travelling, but once out of the van and parked in a shed, the device picked up GPS and gave its position very accurately.

The location accuracy will depend on the building the bike’s stored in – if it’s in my garage, only GSM works, which puts the location anywhere between one and three miles away. Equally, if the motorcycle is taken into our steel and concrete office building, location accuracy drops significantly.

Level three: Stolen and hidden in a shipping container: Notification was again quick, and while bring transported in the van, the unit dropped to GSM, which gave inaccurate results on the journey.

As the bike was unloaded, an update accurately located it just outside the shipping container, but a further one – likely while the bike was inside, but the doors were open, used GSM to put it around a mile away.

Going by the GPS coordinates, it would have been possible to get very close to the bike, then – given the location – it wouldn’t have taken much luck to guess where it was hidden.

As long as the fob is not on the ignition key, MoniMoto could be used to track a bike that was taken while it was running. Updates would be every five minutes or so while the bike continued to move. 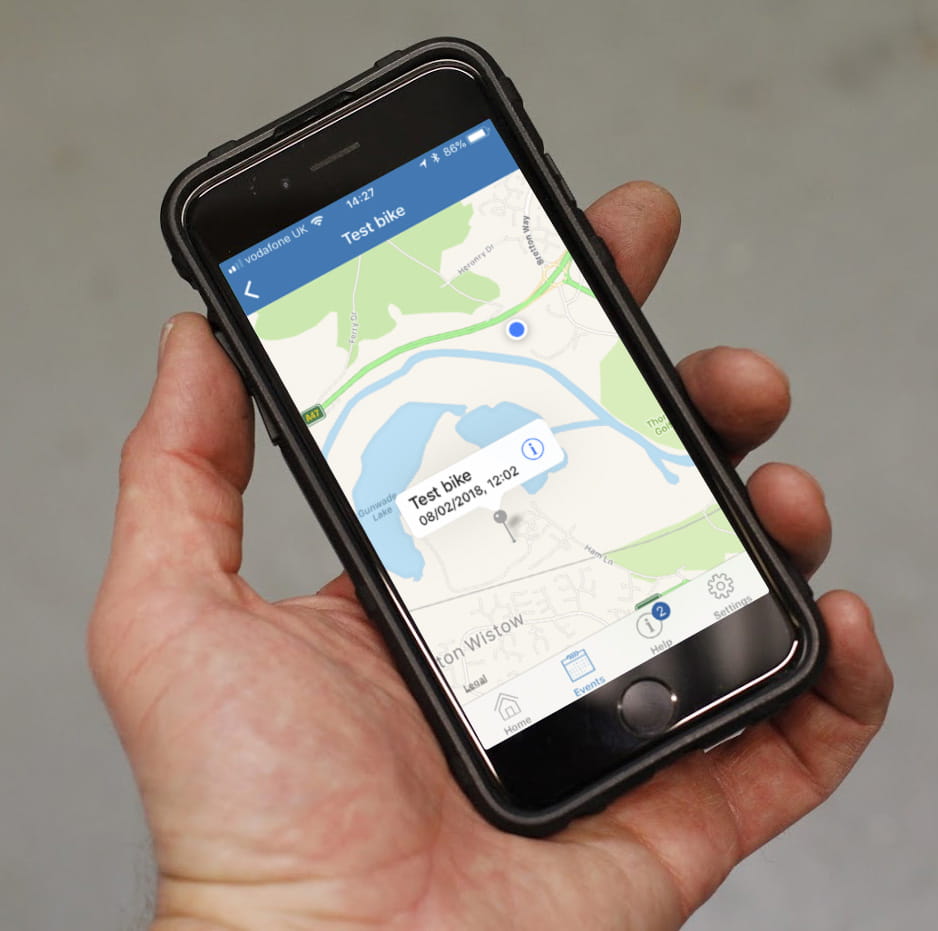 When it locates with using GSM, Monimoto’s accuracy drops significantly

MoniMoto is incredibly easy to set up and use, with an excellent series of user guides and FAQs built into the app. If you do need more help, it’s possible to message the team via the app.

Given that a very large proportion of stolen bikes (and cars) are left for a while to see if they have a tracker fitted – like this example, which could probably have been recovered almost immediately had one been fitted – MoniMoto could give you the opportunity to very quickly grab your bike back.

However, if it’s on private land, you’ll need the assistance of the police to get it back; if you can see it, they should be able to help you, but if it’s not in sight, you’ll have to work harder to prove you’re sure where it is. One of the advantages that monitored systems (for which you pay a subscription to have an operations centre manage the tracking) have over cheaper devices like this is that the companies will often have a good relationship with the police who will know that the information will be accurate, and are more likely to send an officer to respond more quickly.

This is of course speculation, and while you won’t get any insurance discounts for a non-Thatcham-approved system like this, it certainly increases the chances of getting your bike back for a very small outlay.

Battery life is pretty good, but I did manage to flatten the fob and main unit after seven months of use (though I was running a lot of tests). At the time of writing, the battery level display on the device isn't accurate enough to notify when the lithium batteries in the main unit and the fob are running low (lithium cells have a very steep discharge curve) – while an update is expected, warnings of a lack of communication on the app could mean the batteries are low. I replaced mine and paired the device again very easily thanks to the instructions in the app, and the CR123As cost as little as £4 or below for a pair from Amazon, while the CR2032 fob battery is only £1.95 from the SmallBatteryCompany.

Ultimately, where on your bike you fit the MoniMoto will have a big impact on its performance and the ability of a crook to find it. If you’re serious about getting your bike back should it be stolen, then a high-end system like some of the others we’ve reviewed here will give you the best odds, but as self-fit budget devices go, MoniMoto is one of the best value and most successfully implemented we’ve seen – I use it on any test bikes I'm running that don't have any other security, which gives real peace-of-mind when I'm away from home.