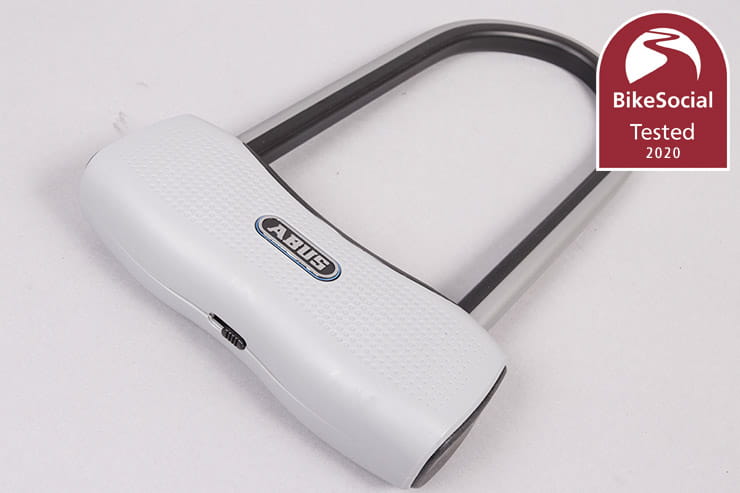 The Abus 770A SmartX U-lock on review here is a clever idea – rather than using a traditional mechanical key, an app on your phone carries a unique code that allows the lock to be unlocked when you’re nearby, thanks to a Bluetooth connection. While I at first considered this to be a gimmick, it’s actually really convenient to be able to walk up to your motorcycle, scooter or bicycle – with your gloves on – and simply slide a switch to unlock your machine. There’s even an alarm built in that helps deter anybody fiddling with it.

The problem is, there’s a serious design flaw that means the lock simply can’t be trusted… 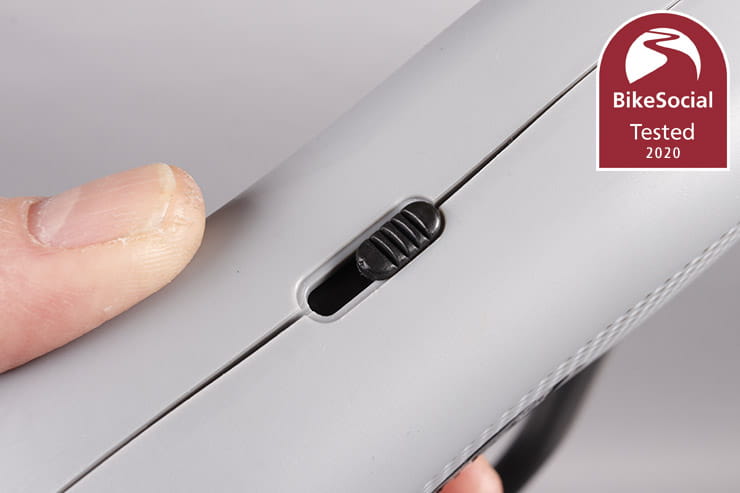 The button on the bottom replaces a traditional keyhole

Weighing 1.77kg, the Abus 770A SmartX is 30g heavier than the more traditional Abus Granit XPlus 540 reviewed here; needless to say, the motorised locking mechanism, battery and controller boards do add some mass but this is still a manageable lock that can easily have the shackle removed for storage under the seat of some motorcycles. Of course, you could bungee it to the back seat if there’s no room, or pop it in the boot if you have a scooter. 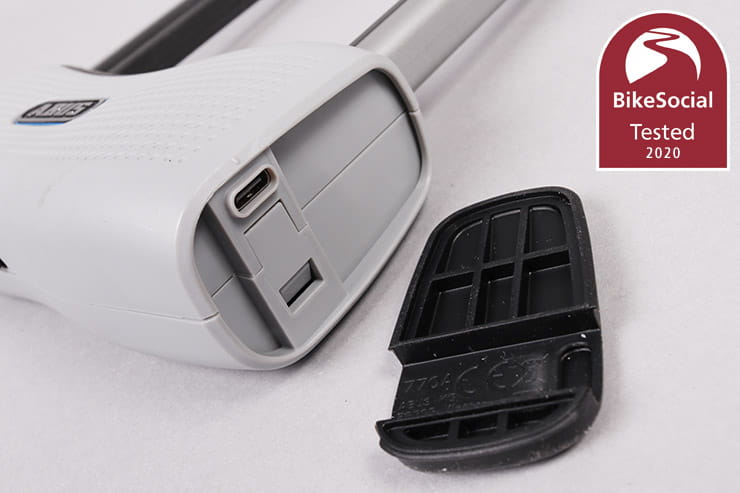 The lock’s charged via a port on the side

The Abus 770A SmartX needs to be charged fully before first use – a USB-C cable is supplied – then running the downloadable app will take you through the stages required. The charging port is hidden under a rubber flap on one side, with only a tiny raised dot in the plastic case to indicate which one to pull off to get to the socket. The cover also isn’t retained in any way, so you’ll need to be careful not to lose it.

I tested this lock with a Samsung Galaxy S10 on the Android OS; it’s also available on iPhones, but I didn’t have the chance to check if the permissions are the same and the app stays active. 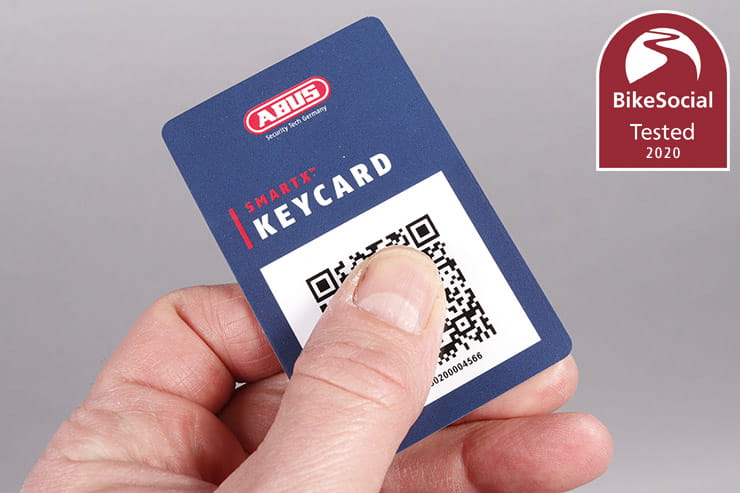 A key card with a QR code is supplied – you’ll need to keep this safe in case you ever need to reinstall the app, but once you’ve scanned it, the lock’s ready to go. I had to install a firmware update, which took a little fiddling to keep the lock connected while approving the download, but once it started, the process was completed quickly and effectively.

The app allows you to set the approximate distance you (and your phone) need to be from the lock before it will release, but the default settings worked fine for me – simply slide the button on the bottom of the lock, it’ll beep, you’ll feel your phone vibrate and hear it chirp, then the lock will release the shackle, allowing you to pull it open. On Android at least, the app stays running (and doesn’t appear to use any significant energy), so once the lock is activated, everything works automatically.

If, after replacing the shackle, you immediately slide the button, the SmartX will go into monitoring mode where if it’s moved, it will look for your phone without you touching the button; if you’re next to the lock it’ll open itself, but if your phone isn’t nearby the alarm will sound.

There’s no need to use the app in day-to-day use, but you can check the battery levels and make various tweaks to the settings, as well as give other users access to open it. There’s also a handy map that shows where you last activated the lock, though while this is powered by Google, you can’t use it to navigate your way there. Still, the address is given so you can pop that into Google maps if you’re lost.

Battery life seemed very good in my initial testing, with little drain over daily use; overall, it’s a really clever idea that works well. Until it fails… 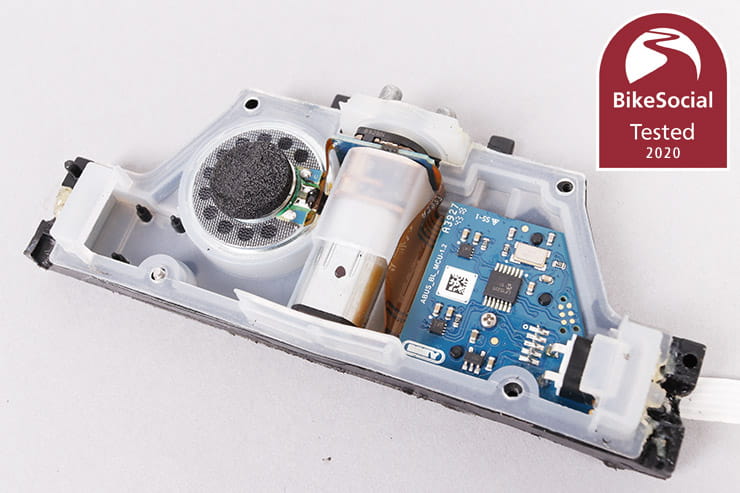 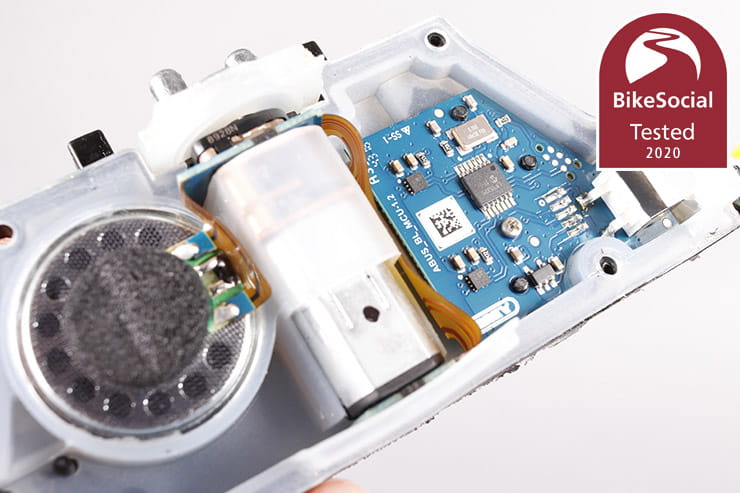 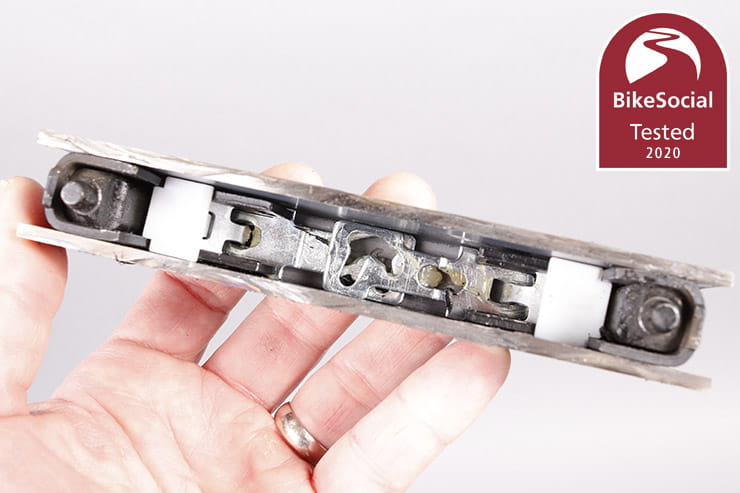 The locking motor and circuit is sealed in a plastic box in the heart of the lock body, operating a mechanical lever mechanism. No problems there…

The big problem with the Abus 770A SmartX U-lock

The Abus 770A SmartX U-lock (or D-lock as some call them) isn’t water resistant.

During testing, I noticed that the alarm – which is pretty loud but not the most ear-piercing – got quieter after some rain, which made me think that water was getting inside and laying on the speaker; along with two small holes behind one of the Abus logos – presumably to help the siren volume – there’s no sealing around where the shackle enters the lock body.

This isn’t a problem for the locking mechanism, motor and its circuit board as that’s in a sealed plastic container buried inside the metal body. What is a problem is the fact that the main controller board – with the Bluetooth module and a back-up battery – is completely open and exposed. I’ve no idea why Abus chose not to use a potting compound to seal it, but on the other side of the lock is also the 3.6V 1,650mAh lithium battery; again, exposed.

I started testing the SmartX by leaving it outside from 17 February. While you shouldn’t leave locks without a bike for risk of tampering, this was done in order to more quickly simulate day-to-day use in all weathers. There were some hefty storms in that time. 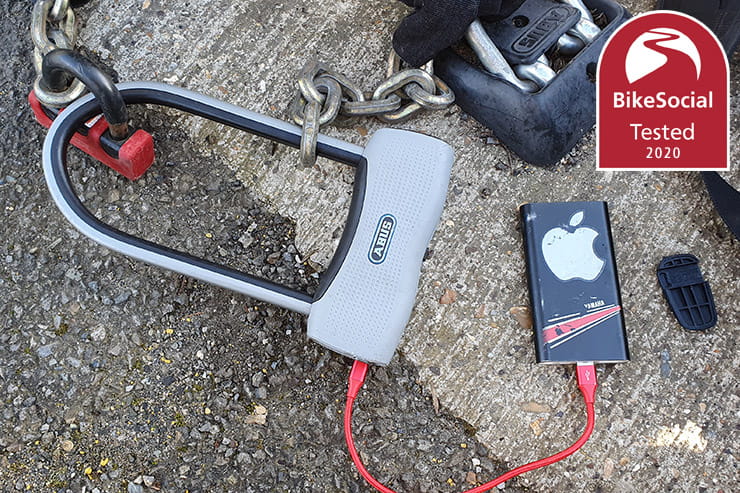 Attempting to add some juice when the lock wouldn’t open. Note my backup lock, which allowed me to get home as I could open that with a normal key

On 28 February, the lock wouldn’t connect with my phone, so I couldn’t open it, even when plugging in a remote power pack. Luckily I had a second lock (the excellent little Abus Granit XS67) connecting my chain to the SmartX, just in case…

Later that evening, the lock worked again, and continued to work until 1 March, when it died completely. I took it apart – it’s very easy to prize the plastic body off – to find serious corrosion on the circuit board. 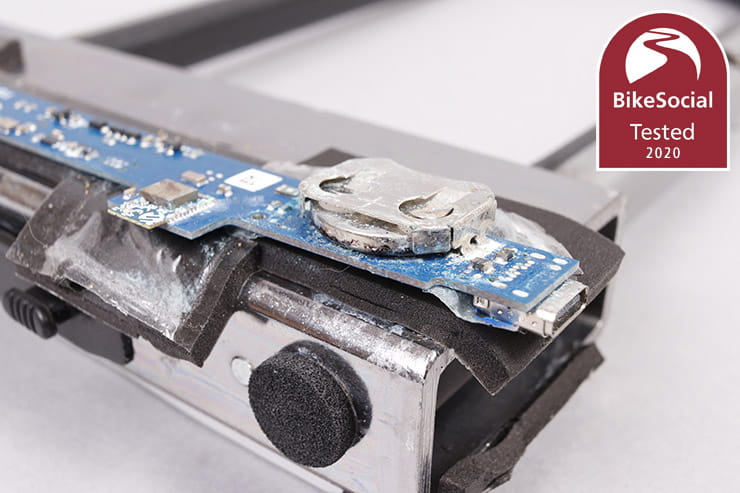 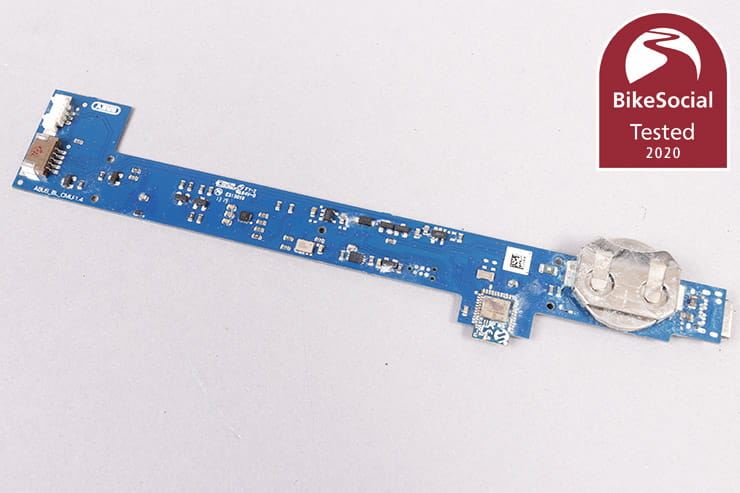 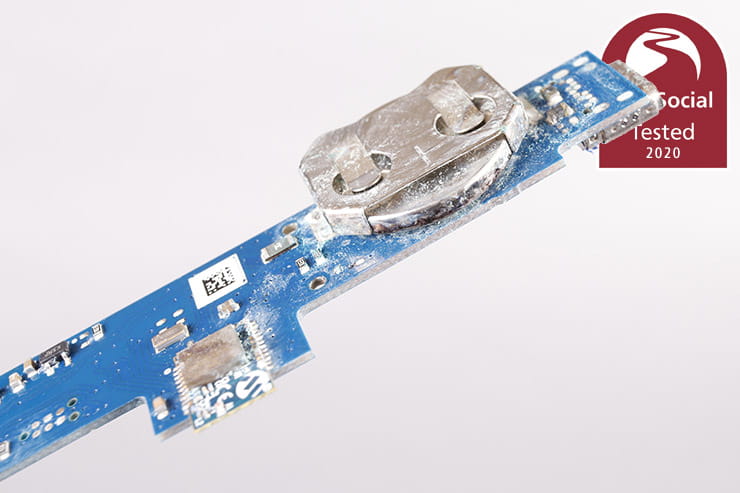 Had I been unlucky? On 10 June I started testing a second lock (we always need two locks for testing due to the destruction methods). Left outside day and night, it lasted until 21 June before the sliding button failed to work. Apparently the battery had died, as with it plugged into a power source it would work again. But it wouldn’t take a charge, and stripping it apart revealed what appeared to be corrosion in the battery’s circuit board. 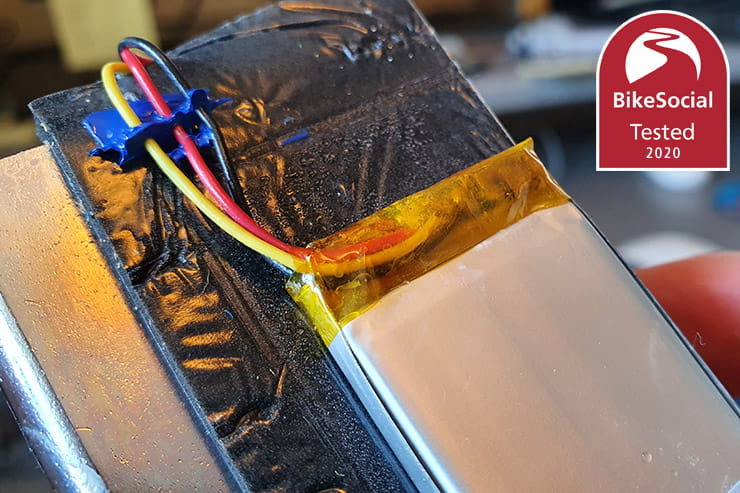 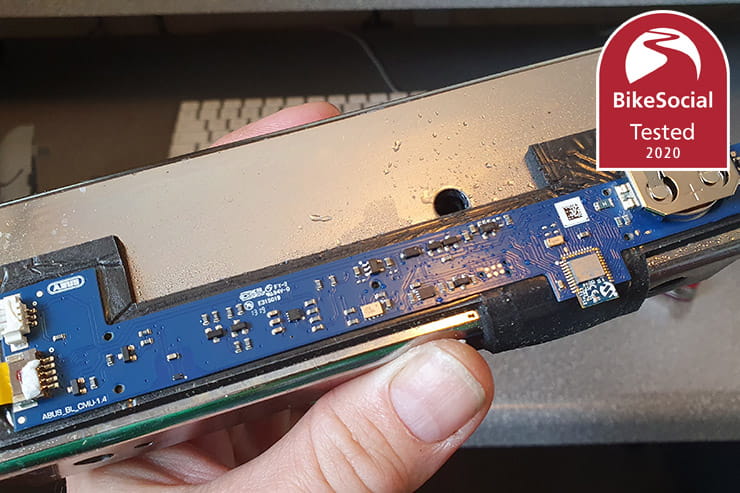 There was such a long gap between the two tests because I was waiting for a response from Abus after returning the first lock to Germany. Nothing was identified as a fault, but the company stated that it’s ‘constantly improving its products’ and sent me a third lock.

On 19 June I put that outside in the rain. By 27 June it was dead – again it would only connect when plugged into a charger, though despite not working off charge, it showed a healthy battery on the app. 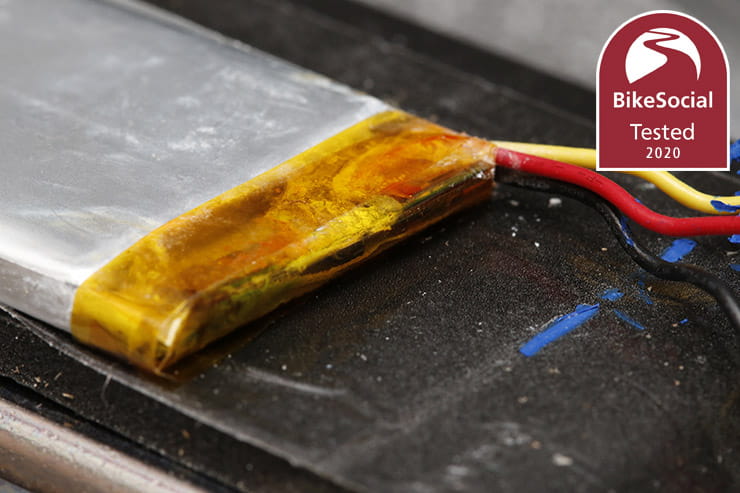 The same thing happened with the third lock

With no manual override, if this lock fails, you can’t unlock your bike. Obviously that’s a big hassle, but it could also mean you have to leave your bike overnight, where it could be more vulnerable to theft. And the ease with which the control board could be destroyed – simply prize the cover off and snap the board, or even potentially stamp on it – means a thief could scupper the lock, leaving your machine stranded, giving them the opportunity to come back when the area is quieter. 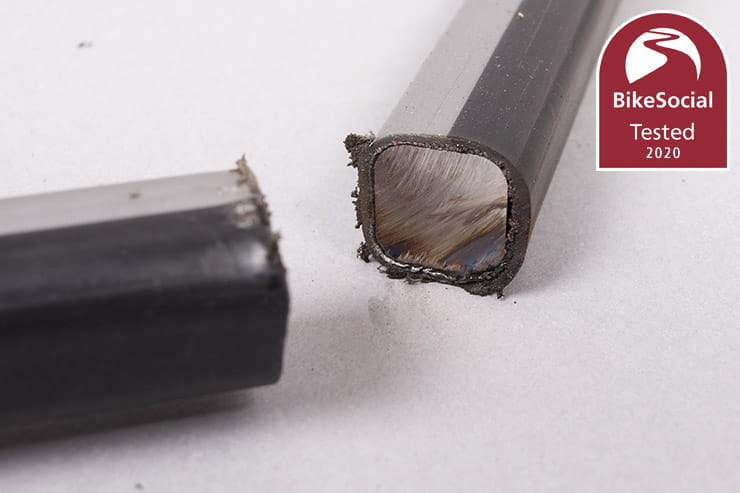 An angle grinder is the most likely form of attack, and the shackle holds up well

Like many of Abus’ other locks, the 770A SmartX is tough, with a square section shackle that has to be cut twice to be removed (some locks allow you to cut once, then rotate the shackle to get it off the bike).

While U-locks are potentially vulnerable to a miniature hydraulic jack attack to burst them open, this is rare and also not possible if the lock is around some road furniture and the bike. Another potential attack, made popular by YouTube click-hunters, is a Ramset powder-actuated nailer attack. While this looks spectacular online, it’s simply not an attack that’s happening, at least certainly not in the UK.

This Abus can’t be cut with even 42” bolt croppers, and is very resistant to a sledge-hammer attack, so in our real-world testing, the only real method of opening it was with an angle grinder. 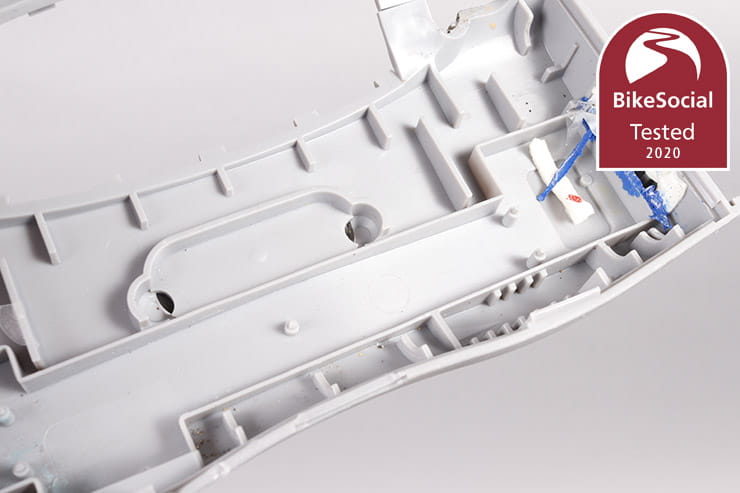 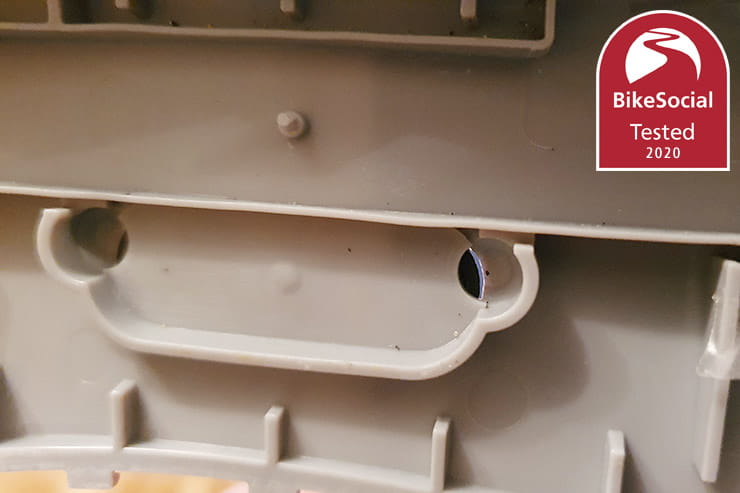 Holes behind the Abus badge let water in, but far more will enter around the shackle

Sadly, it turns out that, after a few weeks of wet weather use, the only way even the owner of an Abus 770A SmartX can open it is with an angle grinder.

A great idea, but with some serious oversights in the implementation, this Bluetooth-controlled lock simply can’t be trusted to open every time, without fail, and for that reason, there’s no way to recommend it. A shame, when Abus has a great track record with many of the locks I’ve tested here.

Moisture trapped inside the second lock

To see our reviews of the best motorcycle security, click here