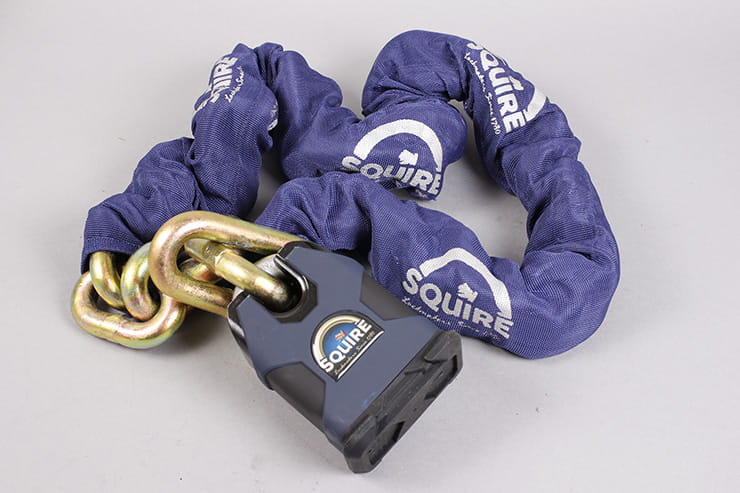 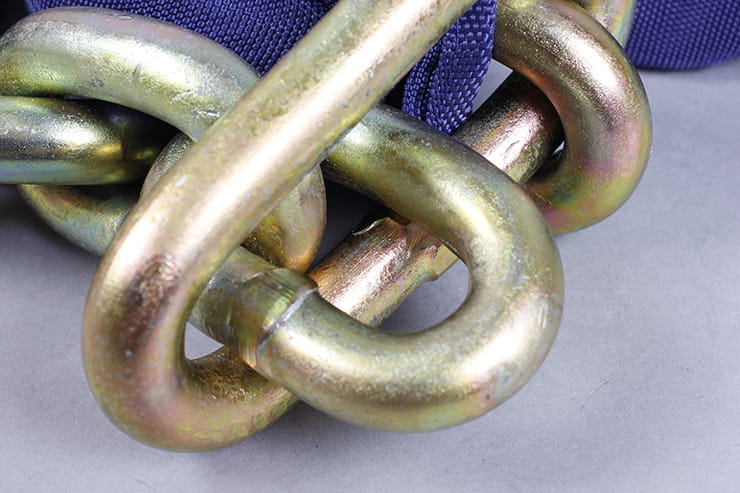 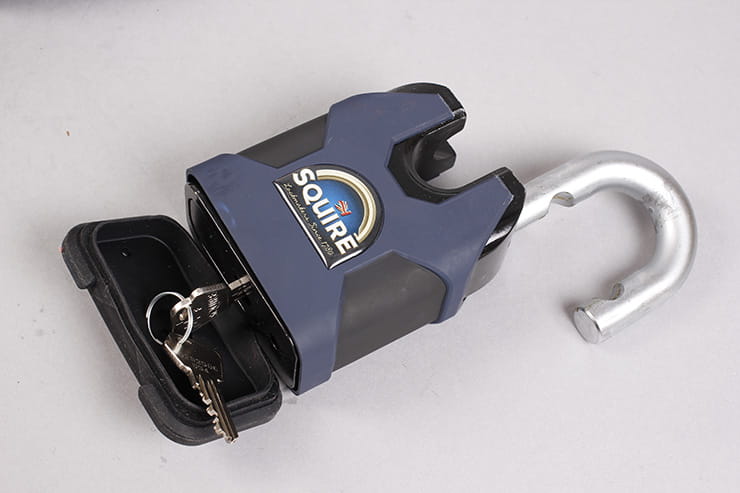 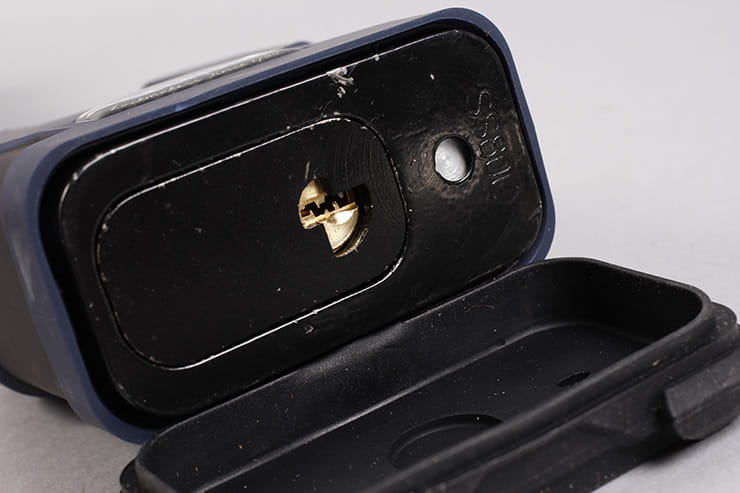 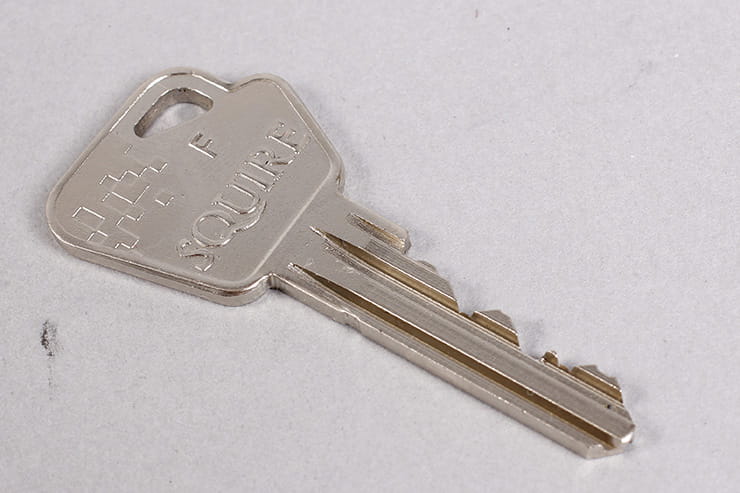 Combined with the Squire SS80CS padlock, the Samson chain we’ve tested is 1.5m long and comes with a soft yet tough fabric sleeve along its length. One link is longer than the others, allowing the other end’s link to pass through and secure into the padlock.

This Sold Secure Motorcycle Gold chain comes with two keys, and the padlock has a plastic sleeve over it to protect your bike’s paint. There’s also a rubber flap over the keyway, but we found the retaining strap to be very fragile, tearing easily and causing the flap to get lost.

The sleeve has rivets at either end to retain it, but ours had pulled out – this didn’t affect performance, and it was easily remedied with a zip-tie. 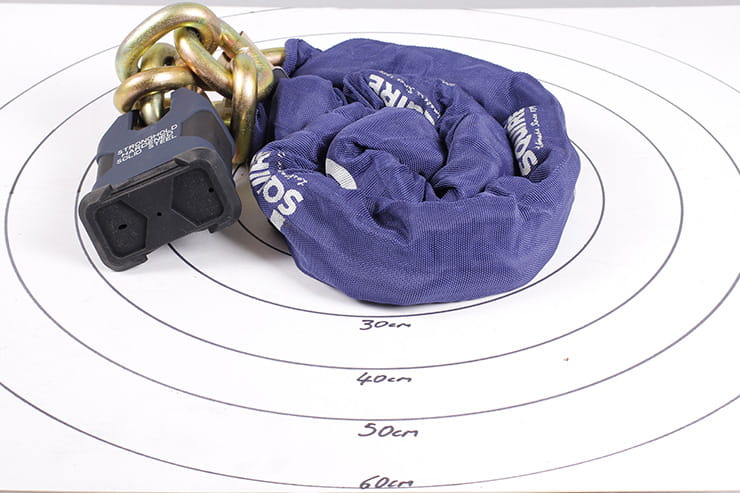 Weighing a total of 11.1kg, the Samson chain itself makes up 8.9kg of that (at 5.93kg/m). The padlock contributes to the other 2.2kg. When coiled up, the chain covers a diameter of approximately 30cm.

We couldn’t cut this chain with our 42” bolt croppers, but surprisingly, when using an anvil and with plenty of space, it was broken with just one blow of the sledge hammer.

Conversely, the Samson gave the best resistance to angle grinder attack of any chain we’ve tested to date – we couldn’t get through it with one of our 115mm discs, so had to resort to our 125mm grinder, which took an extremely long time. The shape, size and material of the links made attack of the round, 15.9-16.2mm-thick links very difficult.

While it deformed, and showed a few surface cracks, even when using the sledge hammer on an anvil, the padlock wouldn’t break. With an angle grinder, we got through the 16mm-thick shackle slightly more quickly than the chain, but it’s extremely difficult to get into a position that would allow the link to be removed, so we believe an attack on the chain would still be more practical for a thief. 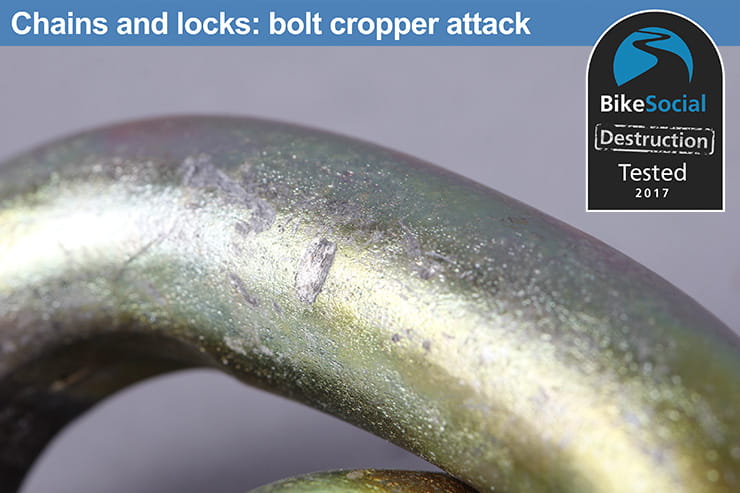 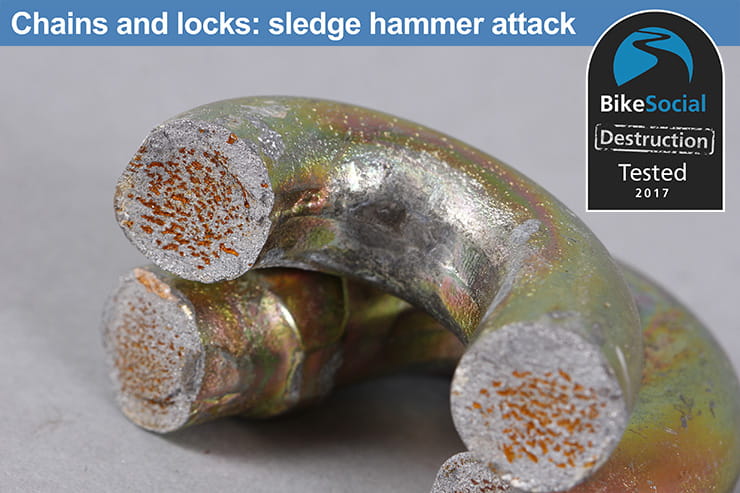 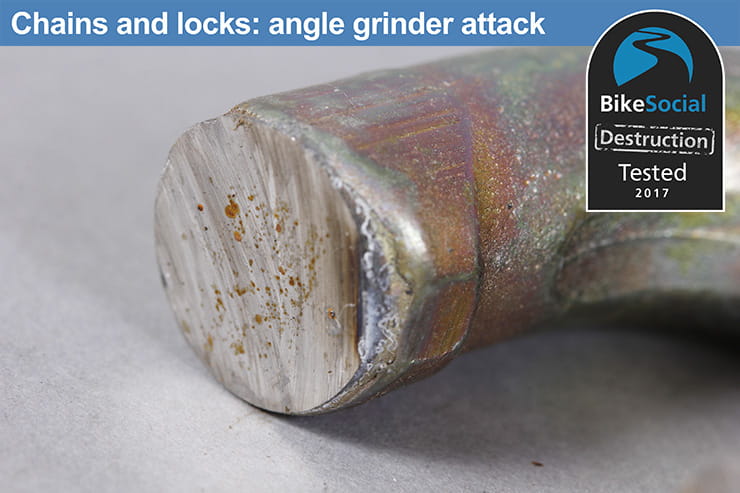 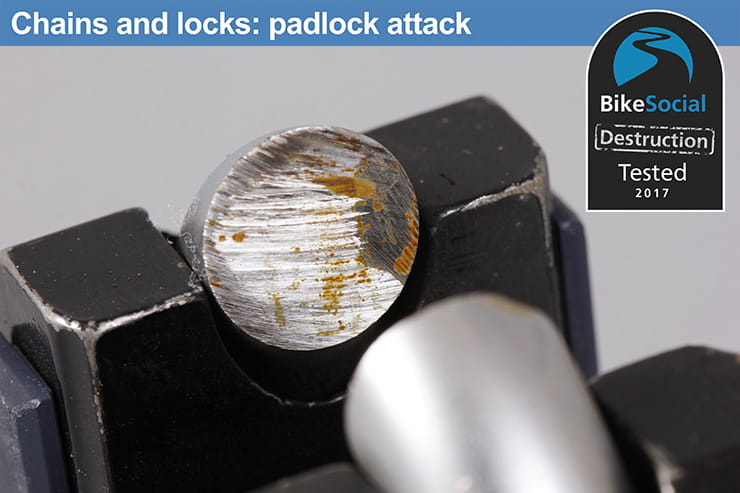 It’s vital that the Samson is kept tight and off the ground to negate the very poor sledge hammer attack result. If this is done, it can offer exceptional levels of security thanks to the very high angle grinder attack time and resistance to bolt croppers.

It’s unlikely that many people would want to carry this chain on their bike – the weight exceeds the limit of most motorcycle luggage – but if you did, it could go in a bag on the pillion seat.