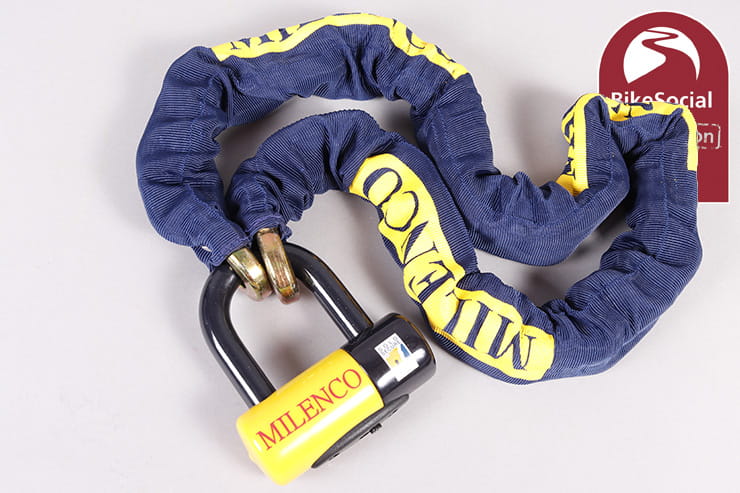 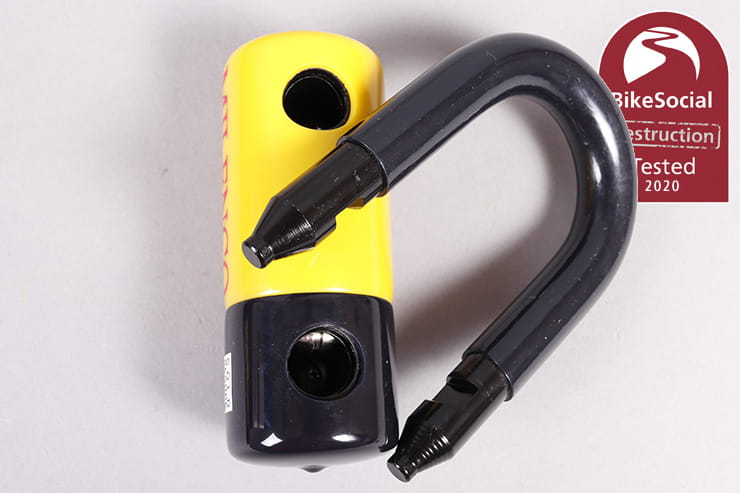 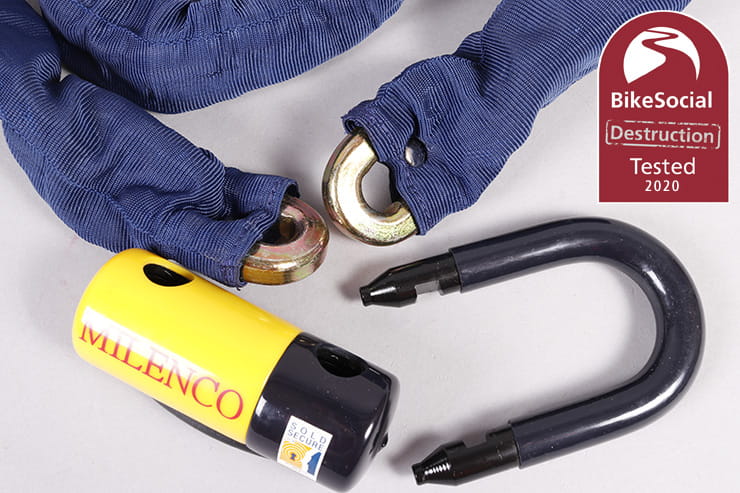 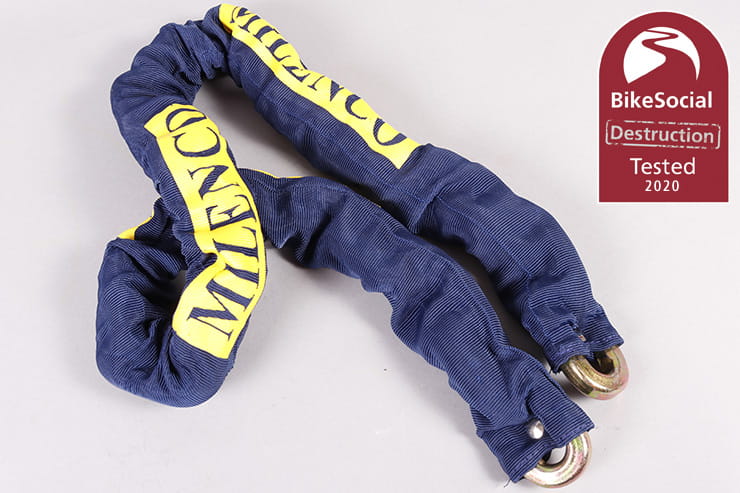 The Milenco Dundrod+ U-lock and 14mm chain is at the limit of what I’d consider to be portable security. Priced at £111.33 for the 1.4m length on review here, it combines a solid chain with the company’s larger mini-U disc lock.

The chain is covered with a tough fabric sleeve – rivetted at both ends – to protect your bike’s paintwork and you can buy it separately at £66.66 for 1.4m, though the links aren’t long enough to pass through each-other; while this isn’t an issue when used with the Dundrod+ or other similar locks, it’s worth noting if you intended to use it with a closed-shackle padlock that only accepts a single link.

The Dundrod+ lock supplied in this package, which doubles as a disc lock, has a rubber-coated body and shackle with three stainless-steel keys (duplicates of which can be made by Milenco). These keys are of high quality and unlikely to deform like some cheaper brand’s disc-detainer keys.

The key-way in the lock body is protected by a sliding door with a nice, positive latching action that doesn’t fall open on its own.

Both the chain and lock are tested to Sold Secure Motorcycle Gold. 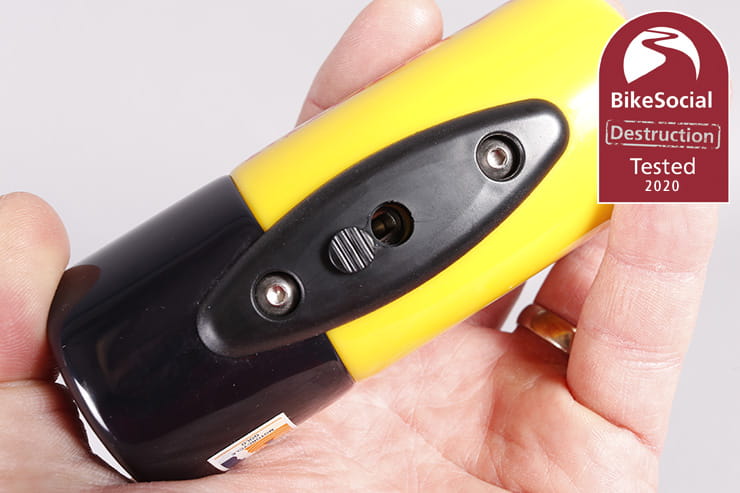 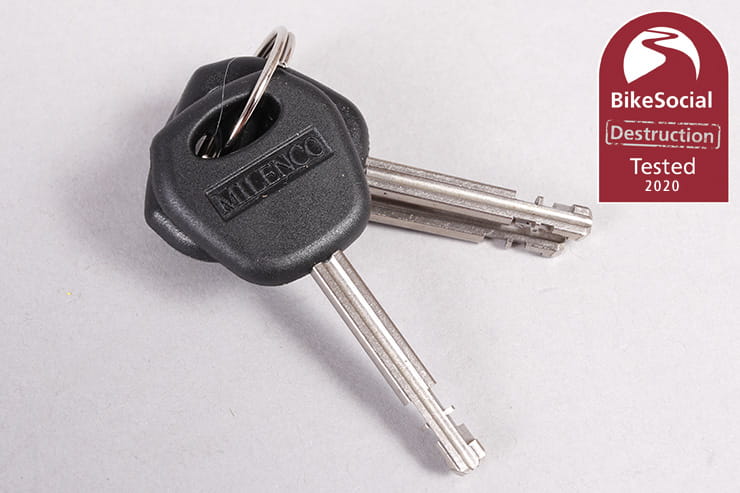 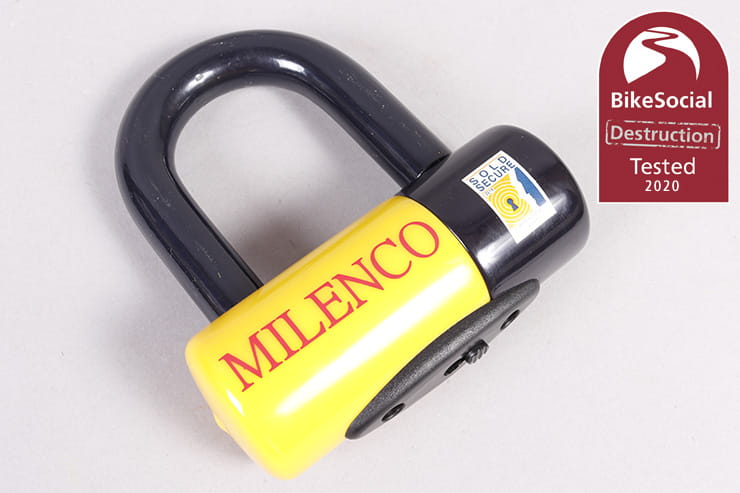 While this is at the limit of portability, it’s also getting towards the thickness of chain that might be considered suitable for regular home use, which potentially makes it something you could use in both circumstances.

The Milenco 14mm chain has square links with a typical thickness of 12.8 to 13.7mm. Rolled up, it covers a diameter of about 26cm.

At a total of 7.22kg with the 1.22kg lock, this should be fine under the seat of a scooter, and may be okay in motorcycle luggage, though another option would be to use the optional £13.33 Milenco chain lock bag. 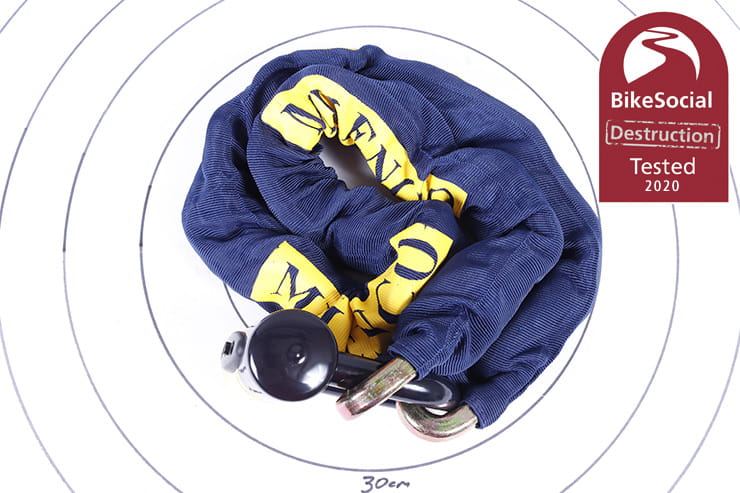 Bolt croppers did nothing but put a slight mark on the surface of the Milenco 14mm chain, easily defeating this fairly quiet attack.

Thieves don’t tend to use sledge-hammers as they’re noisy and awkward – plus easily defeated by keeping the chain off the ground and tight to the bike – but this chain stood up well to an attack under ideal conditions, only cracking at a weld.

While the angle grinder did get through, the cut time was good thanks to the thicker links, which means this offers great resistance in a relatively portable package. Security is always a compromise, but if you want to go as tough as you can while out and about, a 14mm chain is about your limit. 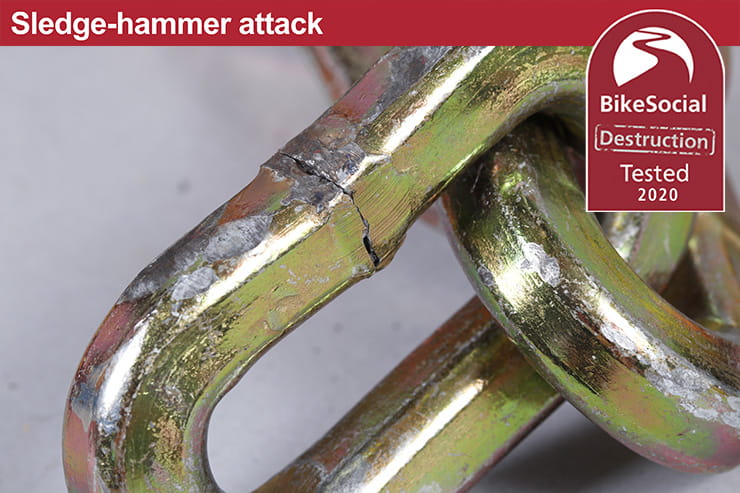 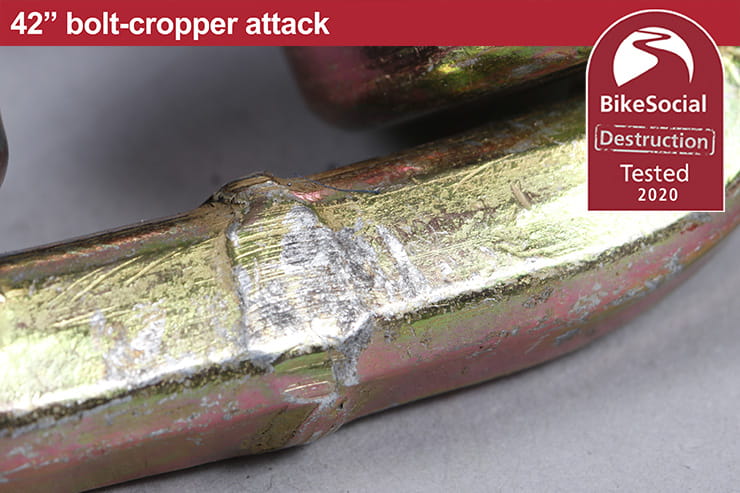 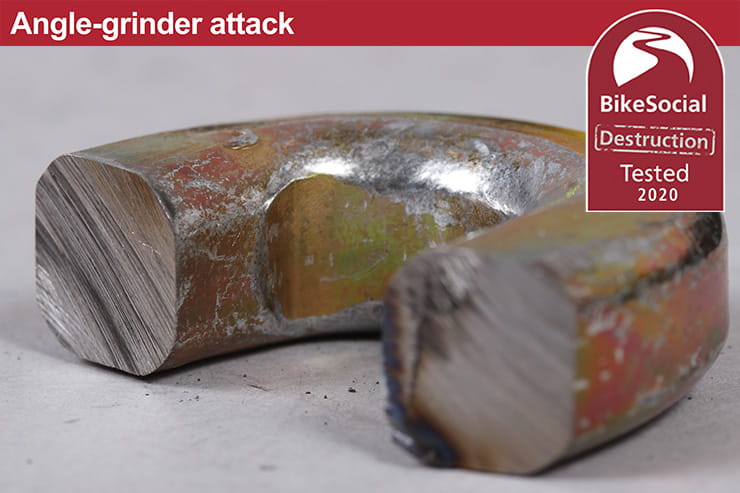 The 16mm shackle of the Dundrod+ disc lock should mean the chain is the more likely point of attack, but while the lock resists any attempt with bolt croppers, and only shows surface damage with a sledge-hammer attack, the shackle only needs to be cut once with an angle-grinder before it can be rotated to release the chain.

Unfortunately, a single cut of the shackle is much quicker than the two cuts required of the chain, which weakens this overall package. 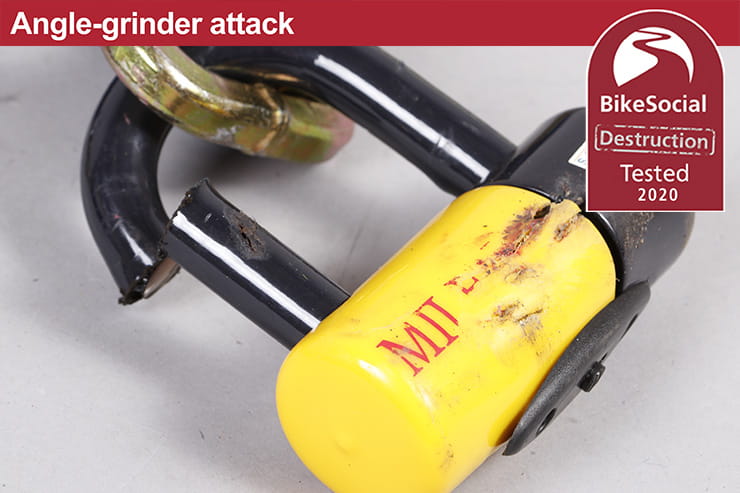 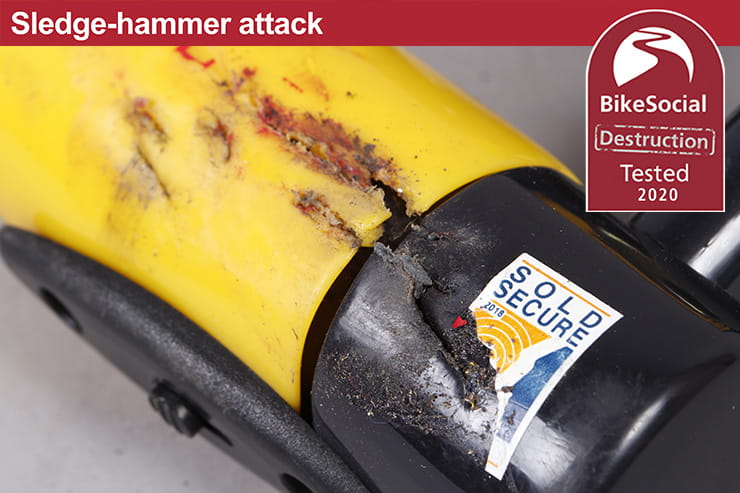 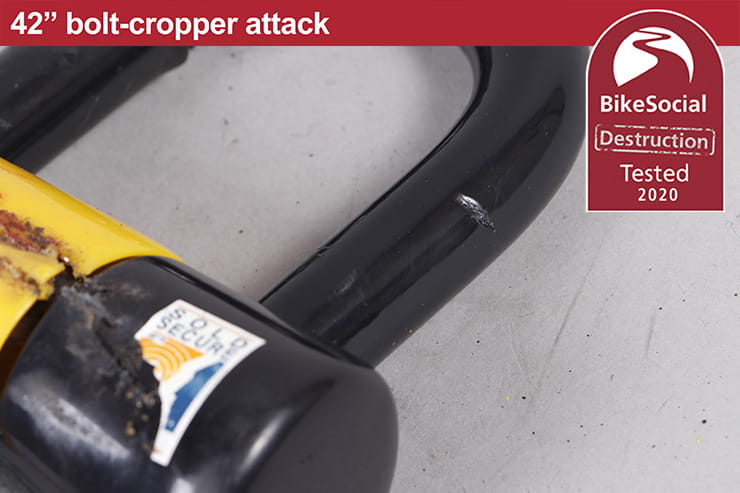 On its own, the Milenco 14mm chain would achieve an AVERAGE rating for an angle-grinder attack, which should be considered very good for portable security. Unfortunately, the Dundrod+ U-lock disc lock of this package drags that score down due to excessive rotation of the shackle after just one cut.

For portable security, the Milenco Coleraine Dundrod+ U-lock and 14mm chain doesn’t offer the security that its weight should warrant; in fact, the cheaper Milenco Colerain 12mm chain lock – with its integral lock – is a tougher solution for when you’re out and about, and it’s lighter.

On its own, the 14mm chain is a good compromise between portability and resistance to attack; combine it with a tougher lock and it makes for a decent package, but it’s unfortunate that the links won’t pass through each-other at the ends, as that means you can’t use a closed-shackle padlock that only accepts one link.

The Dundrod+ U-lock disc lock does give great versatility in doubling as a disc lock on its own, and while it’s a shame that what is a well-made piece of kit is let down by the vulnerability of the shackle, it could be argued that once a thief has made a start with a grinder, the difference in attack time could be less important to them.