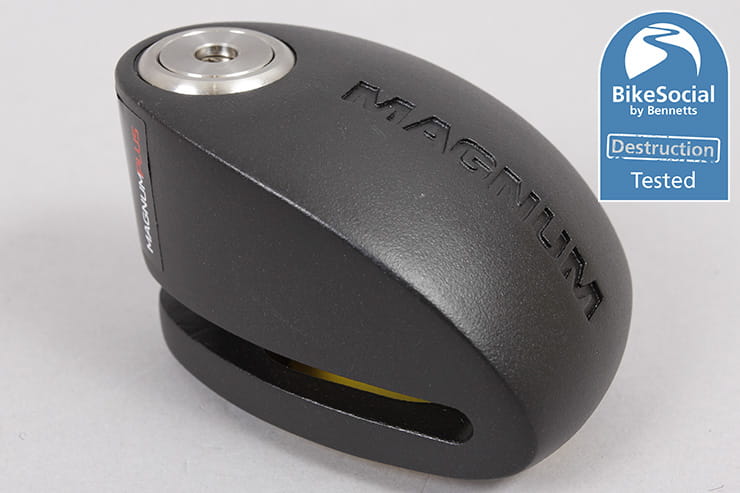 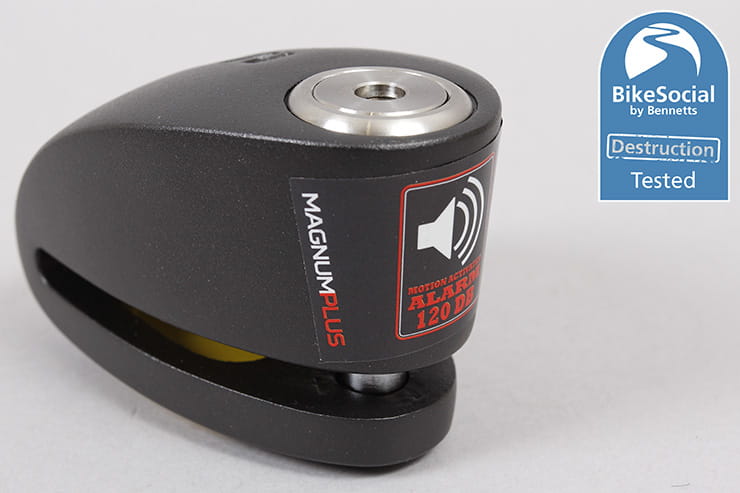 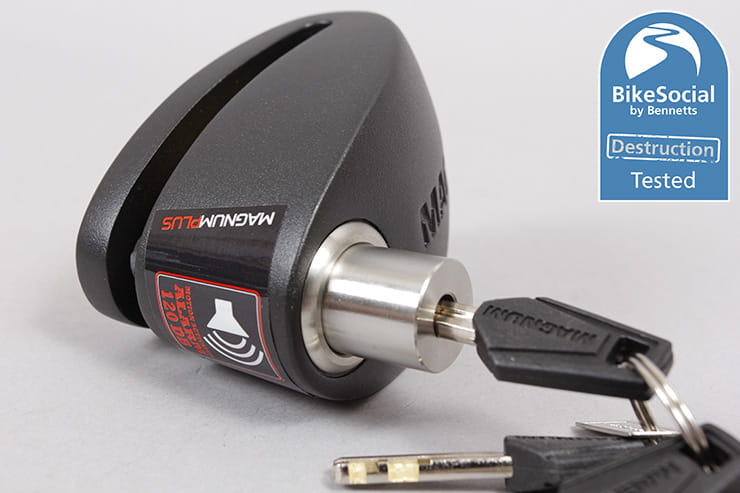 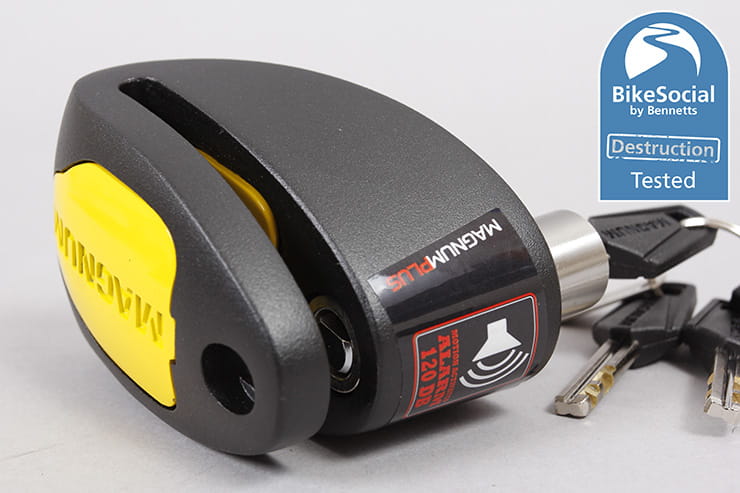 The MagnumPlus Titan on review here is a stainless-steel bodied disc-lock with a powerful 120dB alarm and a 10mm (measured at 9.8mm) locking pin. While this size of pin means it’s unlikely to be compatible with scooter disc brakes, it does offer the best resistance to attack. 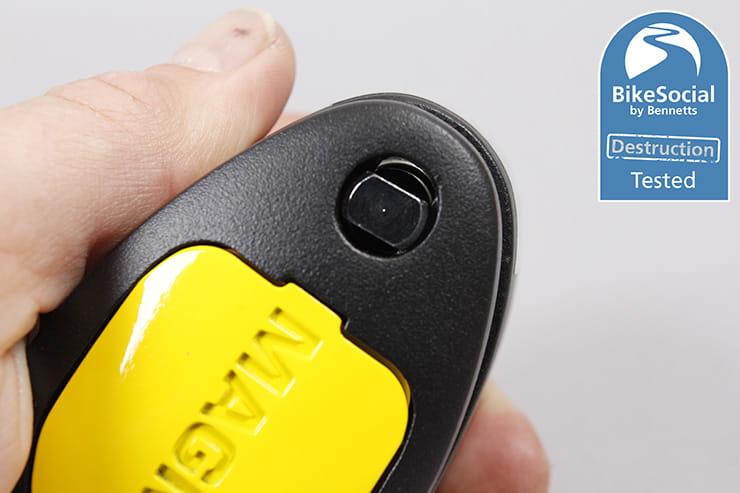 The locking pin is rotated to secure, so it engages into the bottom of the body, making pry attacks less achievable. As it also locks at the top, this is the ‘double locking system’ that’s advertised on the packaging. It’s more than marketing; if the pin is cut it means it should still be very hard to remove.

A generous five keys are supplied, and the lock is rated as Sold Secure Motorcycle Gold, though always keep in mind that this level of independent attack test doesn’t include an angle grinder.

The Titan includes £400 excess cover; if you register online your insurance excess could be paid up to the value of £400 in the event of a successful motorcycle theft claim, if the lock was breached. The deal only lasts for 12 months from the date of purchase, and you’ll need to supply the original receipt, at least one original key and the broken remains of the lock itself, so this offer won’t apply if the lock is taken with the bike, or if the brake disc was cut to remove it. Registration requires specifying the single bike that’s insured, so you’ll not be covered if you use it on another one, and most importantly, keep in mind the likely theft methods that will be used on a lock of this type and performance, as detailed below.

The lock includes a pouch with a belt clip, but I’d strongly recommend that you do not use this, or indeed place the lock in a pocket; if you were unlucky enough to fall off, it could cause injury.

A coiled reminder cable is supplied, which can be hooked up to your bars to stop you riding off with the lock attached, though the beauty of an alarmed lock is that it’ll warn you as you stand the bike up.

The siren is an ear-piercingly loud 120dB – while some will question the value of an alarm, they can put off the more opportunist thieves, but will also often alert the owner to somebody fiddling with their bike. This one is activated as soon as it senses movement or significant vibration. 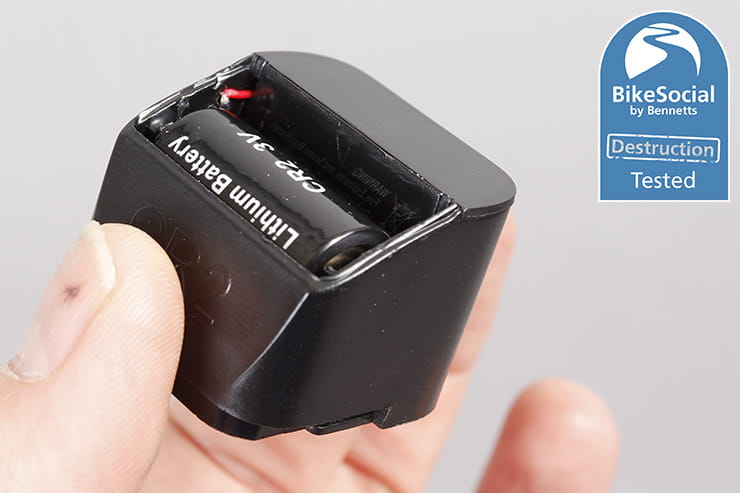 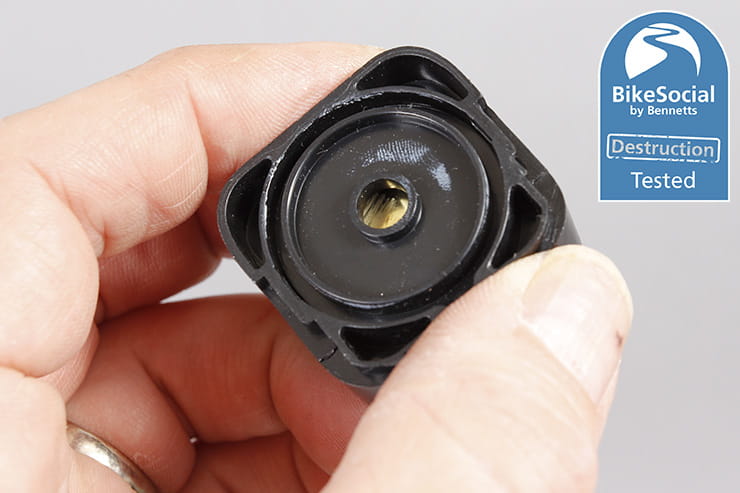 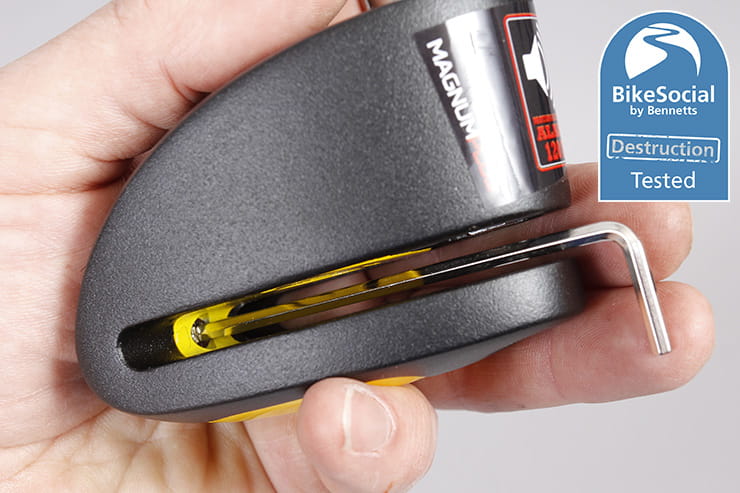 The alarm’s powered by a supplied CR2 battery, and is accessed with the Allen key when the lock’s open

The MagnumPlus Titan weighs 618g and is compact enough to fit under many motorcycle seats. It’ll easily fit in luggage or a tank bag, but as with any security, if you pop it in a rucksack be sure you have a back-protector on too. 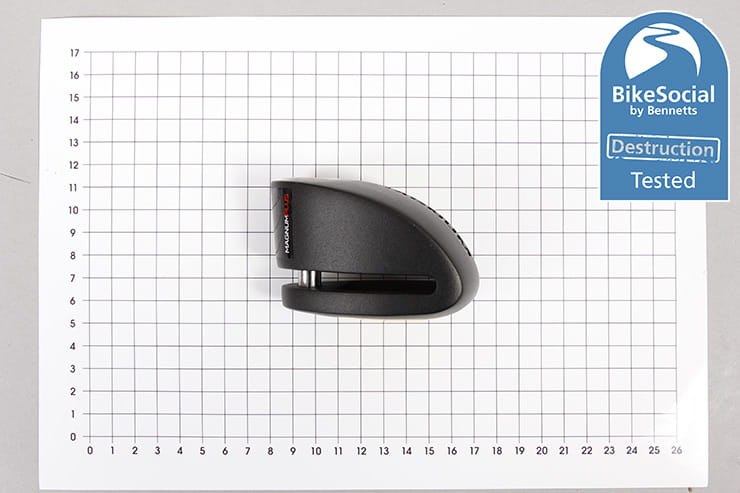 Fitting the lock’s as easy as any other of this type – turn the key and the spring-loaded pin pops out, then slide it onto the disc. Press the key in, turn it to lock and you’re done.

If the lock beeps gently once as you push the pin down, it means the siren is armed. If it beeps twice, it means it’s disarmed. This simply cycles one after the other – there’s no sensing of the disc here – but in normal use it should work out correct. If for some reason it’s disarming as you put it on, just release the pin then push it back down again.

After a few seconds there’s a loud single squark (the neighbours might not like this if you work late shifts), then if anybody does move your bike, the Titan gives five neighbour-friendly soft beeps before going into full screaming mode. This is also the case as you remove the lock, but there’s enough time to get it off before it starts screeching.

The alarm is contained in a plastic unit buried in the body of the lock – a CR2 battery is included, as is an Allen key to get at it. It’s a bit of a tight fit, so extracting it needs a flat-bladed screwdriver, but these cells tend to last well.

I haven’t had any problems during testing with water harming the circuitry during rain, but it can significantly deaden the sound. In my testing, the siren is ear-piercingly loud when dry, but when water runs over the lock it can settle on the piezo sounder inside, making it a lot quieter. It was fine once blown clear, and in most circumstances won’t be an issue, but it’s a shame that water can – if only temporarily – impair the siren. 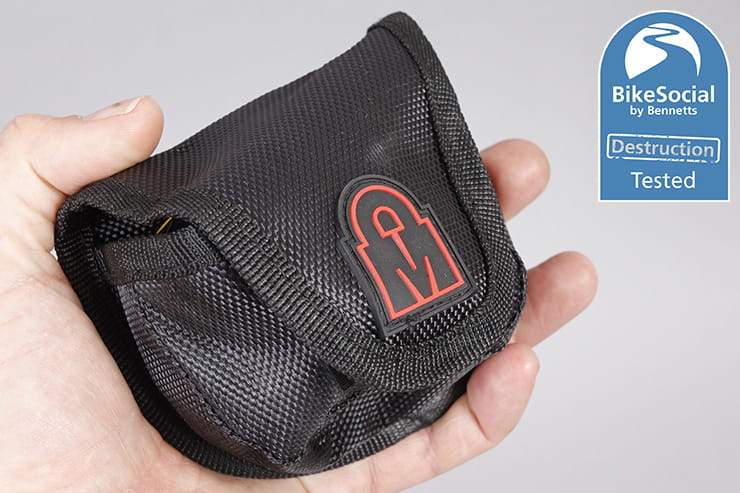 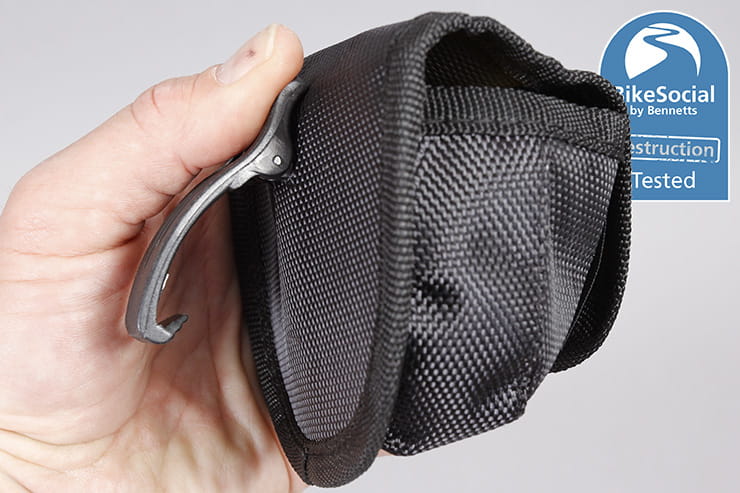 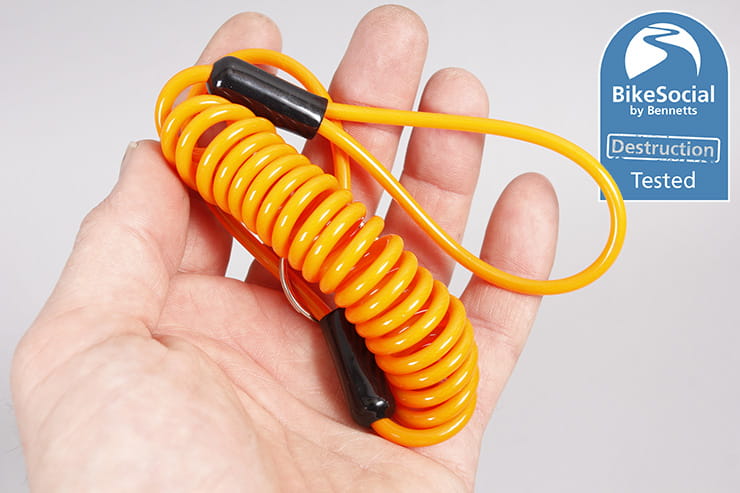 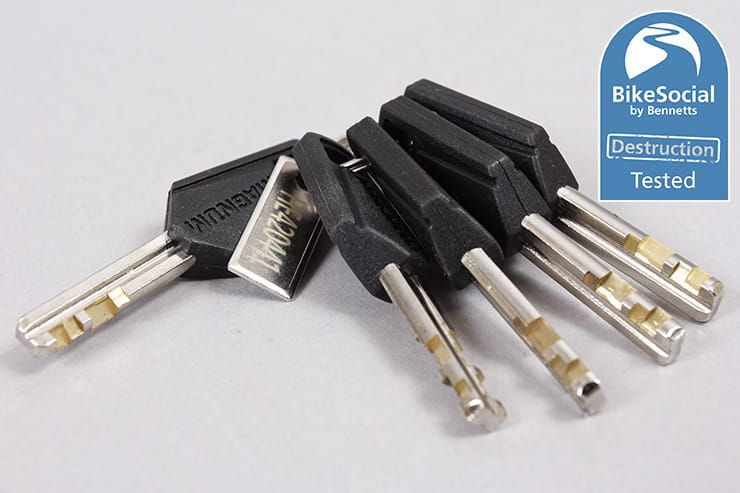 Five keys are supplied, as well as a reminder lanyard and a carry pouch

A bolt-cropper attack isn’t possible on this lock, and using a claw hammer and pry bars failed to harm it.

Using a tapered screw extractor failed to split the stainless-steel body, and a bolster chisel and lump hammer didn’t damage it either. Striking it repeatedly with a lump hammer also wouldn’t remove it, but it did very quicky reduce the volume of the siren to an extremely low level. After many blows the lock was still firmly in place, though I was unable to open it after a very thorough attack.

Using an angle-grinder, I was able to get in to cut the pin, but even with it in two parts there was still no room to get it off the disc as the pin won’t drop out of the back and the lock mechanism remains secure.

Attempting to cut the back of the lock body with an angle grinder in order to separate it was a long and noisy process, leaving only what is the most likely attack method with disc locks – cutting the disc itself or picking the bike up with the lock in place (either of which wouldn’t see the excess insurance offer come into effect). 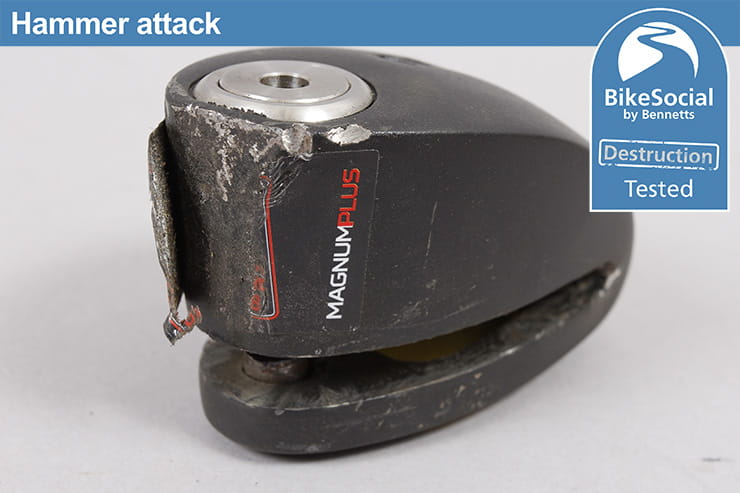 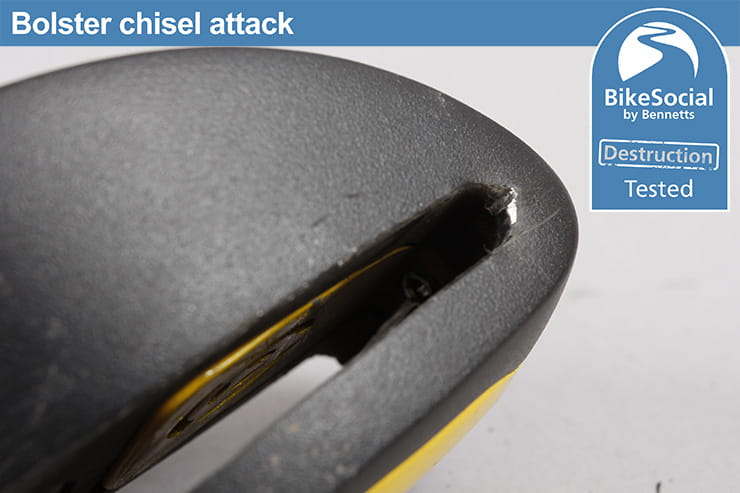 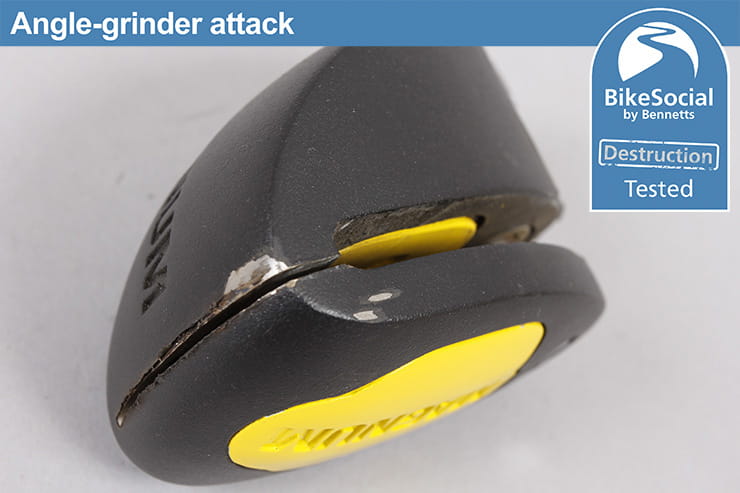 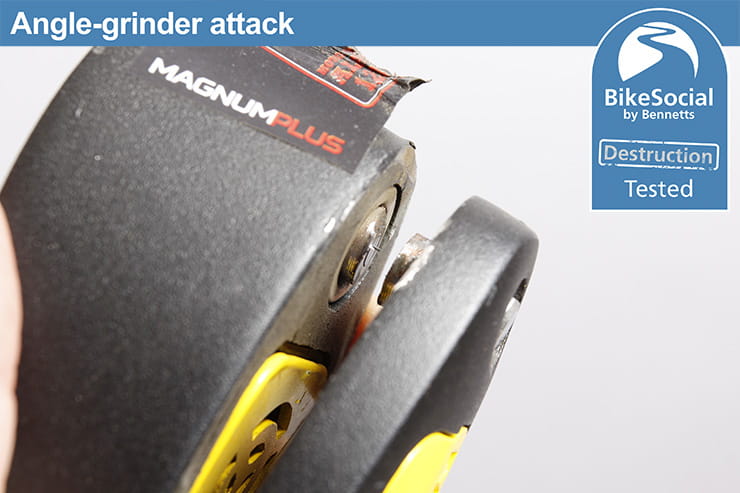 The MagnumPlus Titan is a good, solid disc lock at a relatively reasonable price. It’s more than strong enough to stand up well to any attack, so just be aware of the limitations of any of them; cutting the disc itself or carrying the bike away.

Our research shows that even using just a disc lock makes your bike three times less likely to be stolen, and with the built-in alarm this is a great bit of kit (as long as it’s dry) for when you’ve parked up and need to leave the bike for a while. It’s also excellent as layered security; every lock you fit adds time to any attack, making it far less likely you’ll be the victim of crime, so combining this on the front, with a chain on the rear, is a great way to keep your bike even safer.

BikeSocial members save 10% at Halfords, bringing the price of this lock down to £72.