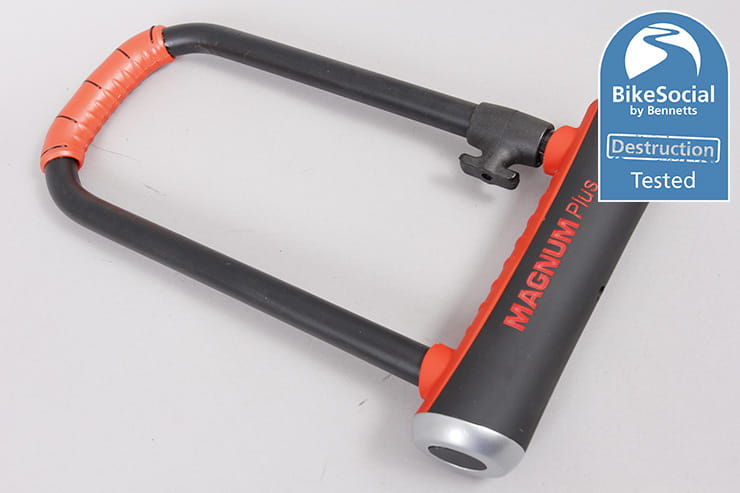 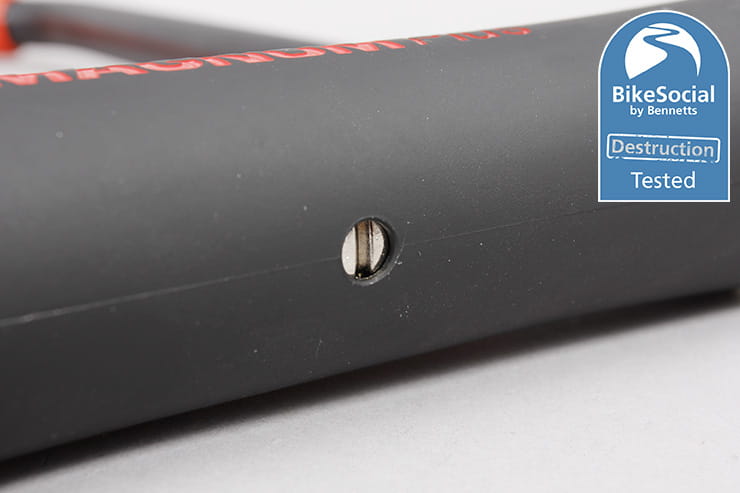 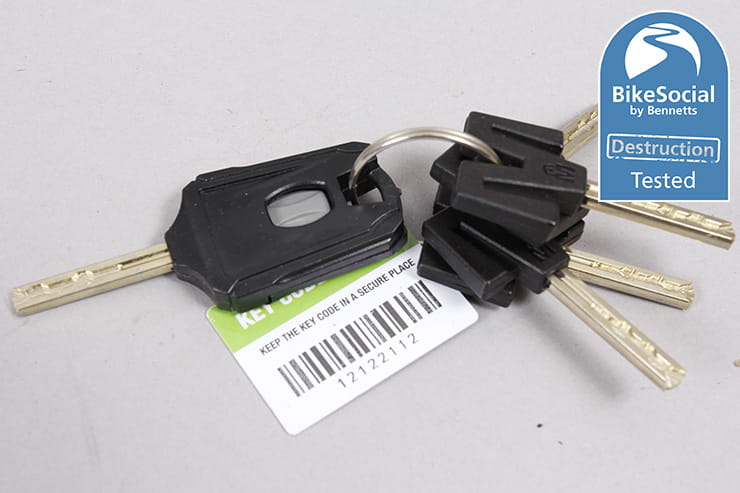 The MagnumPlus Gigantes on review here is a large D-lock that’s suitable for motorcycles and scooters, given its ability to pass through or around a wheel.

The shackle and body (besides the metal end-caps) are covered with a rubbery finish to protect the bike’s paint, while five keys are supplied (one has a small LED built in), along with a mounting bracket, though this is designed for bicycles, so at best you might find a way of using it on a tubular subframe.

A coiled reminder cable is included, which can be looped around the shackle when fitting, then the other end hooked onto your bike’s throttle. This should prevent you riding off with it fitted, and it’s also an extra warning to would-be thieves.

The Gigantes includes £300 excess cover; if you register online your insurance excess could be paid up to the value of £300 in the event of a successful motorcycle theft claim, if the lock was breached. The deal only lasts for 12 months from the date of purchase, and you’ll need to supply the original receipt, at least one original key and the broken remains of the lock itself, so this offer won’t apply if the lock is taken with the bike, or if the chain it was attached to were to be cut. Registration requires specifying the single bike that’s insured, so you’ll not be covered if you use it on another one.

The MagnumPlus Gigantes has a Sold Secure rating of Motorcycle Gold, though when buying any security, do always keep in mind that this level doesn’t include an angle-grinder attack. 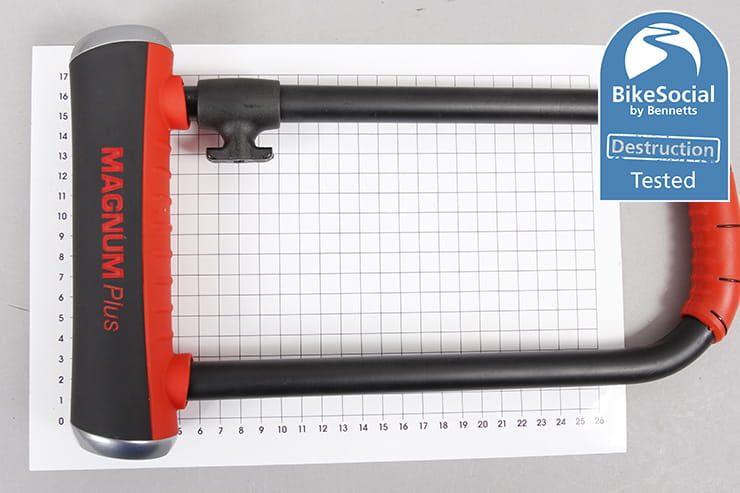 The shackle has an interior space of 260x111mm, and measures 16.8mm in diameter. When buying any U-lock (or D-lock, as they’re sometimes called), be aware that when in use, you should aim to have as much of that space filled as possible, in order to prevent a thief getting a small bottle jack inside. This isn’t a particularly common attack, but it’s why some locks are available with different sizes of shackle.

While this lock can be used to secure a chain, it’s best suited to going around a wheel, or over the forks and across a cast spoke, making the Gigantes ideal for scooter riders who often can’t use a disc lock. You could also connect a chain to it, for additional security.

While it’s not a small device, it’s reasonably slim so should fit under a fair few motorcycle seats, especially if you separate the body from the shackle. 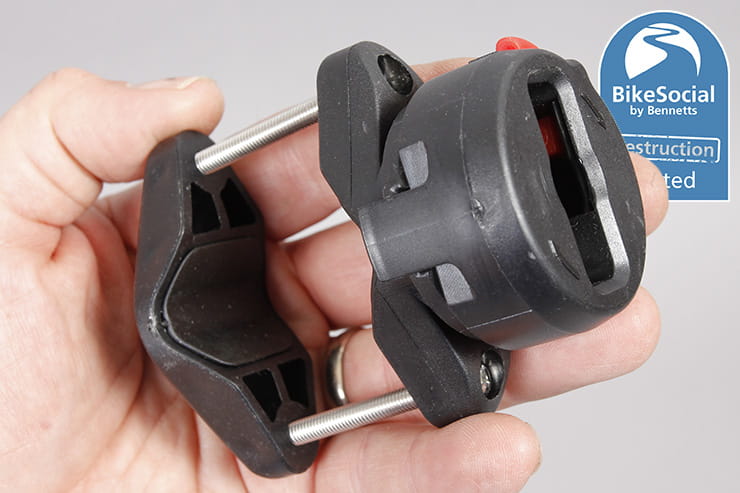 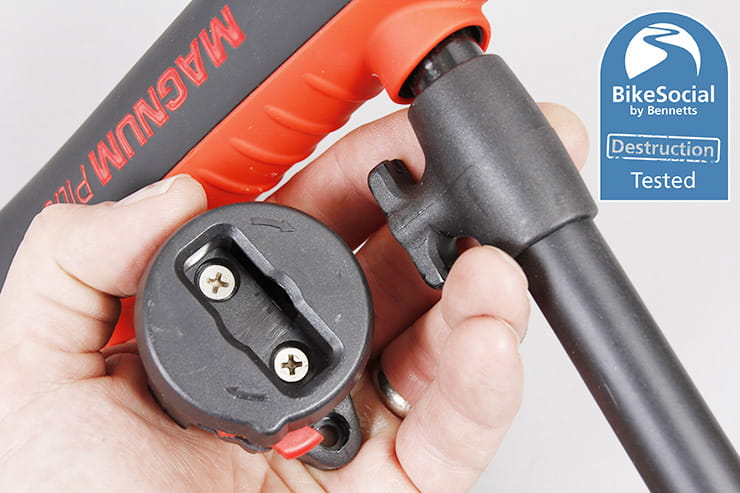 The keyway has a metal gate to protect it, and the key design makes it easy to use. The shackle separates fully from the body so you should be able to pass it around most wheels.

On scooters, the ideal would be to get it around a fork leg and through the wheel, though you’re unlikely to be able to do this on a motorcycle – my Grom, ZX-6R and Tracer 9 GT all could only take the lock with it wrapped around the front tyre and wheel. This is still more secure than a disc-lock as the wheel itself can’t be cut quicker than the lock. Of course, the machine could still be picked up, but our research has shown that even the most basic of security makes a huge difference.

On my S1000XR, I was able to get the lock around the wheel and the caliper bracket, which would make a hydraulic jack attack almost impossible.

Theoretically you could use this to secure the swingarm to the rear wheel, but I was unable to find an angle to do this on all four of my bikes. How you use it will depend very much on your motorcycle or scooter, but I was able to lock all of them with better security than a simple disc lock offers. You might need to remove the mounting bracket from the shackle with an Allen key for tight spaces, but it’s unlikely many riders will make use of this feature anyway. 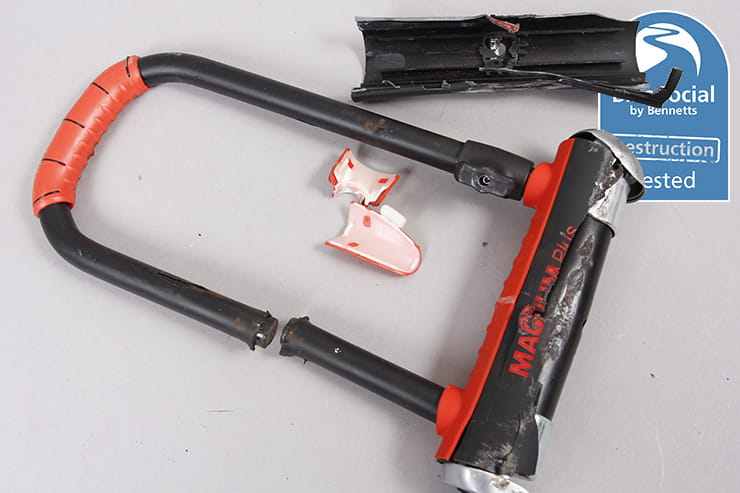 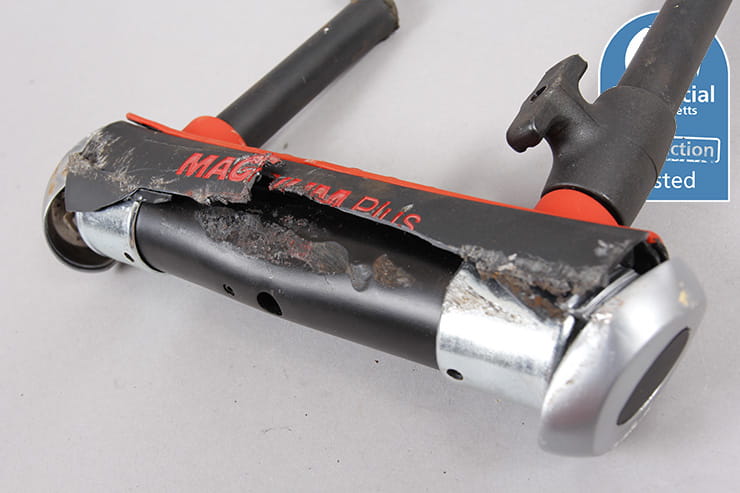 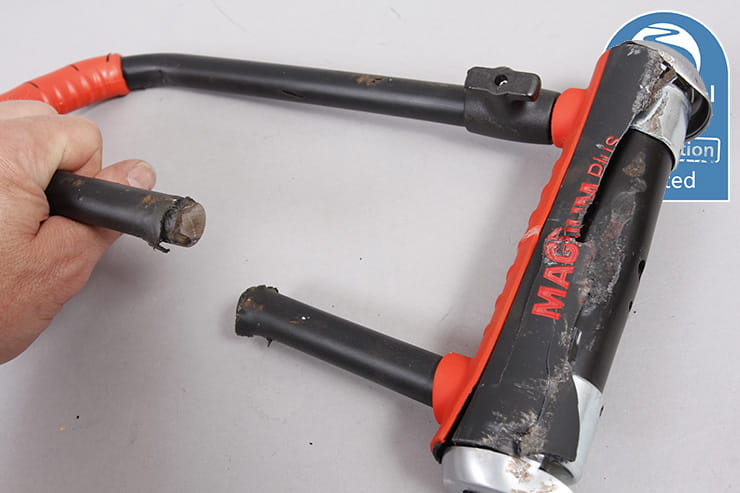 A shackle of this size can’t be defeated with bolt croppers, and even when laid on an anvil and struck repeatedly with a sledge-hammer, I couldn’t get it to open. It was a mess afterwards, but it stayed firm.

The most likely form of attack will be with an angle-grinder, and the cut time was as I’d expect of something like this. I did have some problems with the grinder bucking, which extended the time a little, but when it’s held firmly this offers very similar protection to other U-locks and D-locks I’ve tested.

Unfortunately, like others at this price point, after one cut the shackle will swing open enough to remove any chain that’s inside, but it’s still a cut time longer than most portable chains. You won’t be able to get it off a wheel with one cut though, so it is offering good protection. 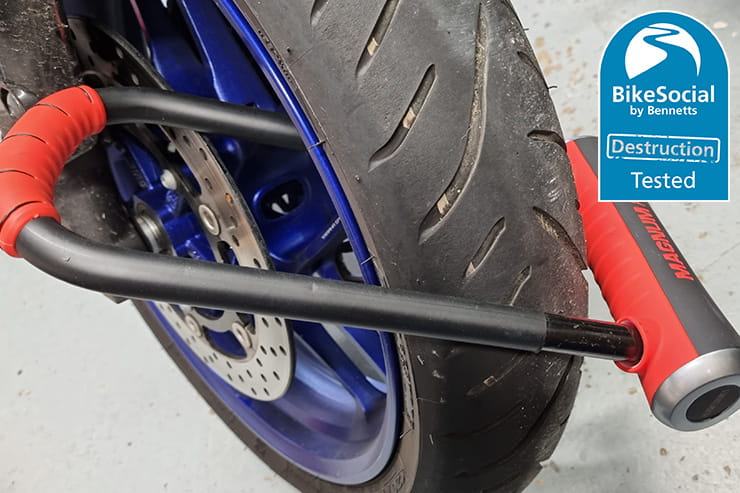 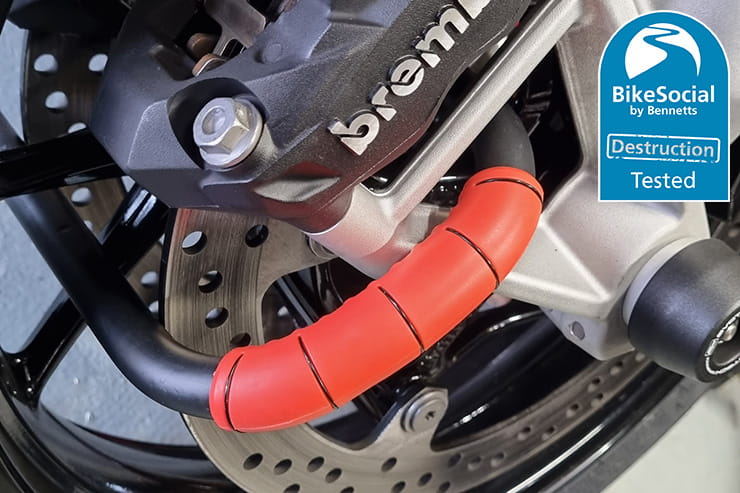 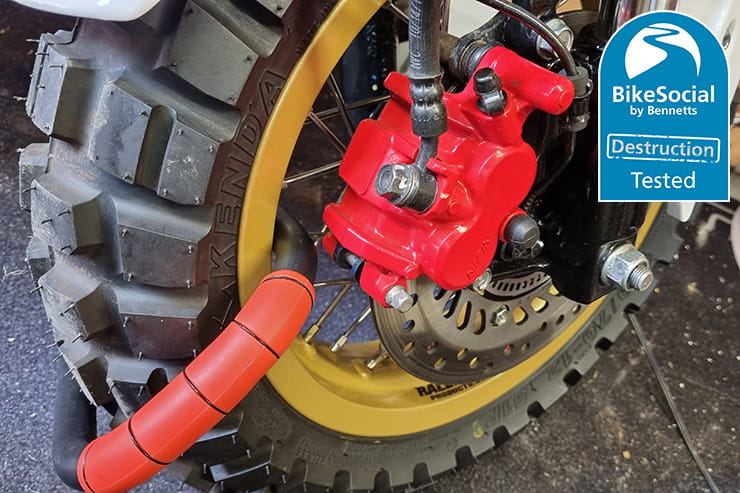 If you’re only using this to secure a chain, it’s fine up to about 13mm links, but beyond that I’d suggest something with more resistance to an angle-grinder attack. As it can go around a wheel though, it gives a lot more security than a disc-lock when used on its own (or indeed with a chain as well).

The MagnumPlus Gigantes is a useful lock that offers decent versatility for riders of scooters and motorcycles. It’ll fit into most luggage (always wear a back protector if you have to put it in a rucksack), and presents a significant challenge to any thieves for this price point.

BikeSocial members save 10% at Halfords, bringing the price of this lock down to £45.