How we tested motorcycle chains and locks 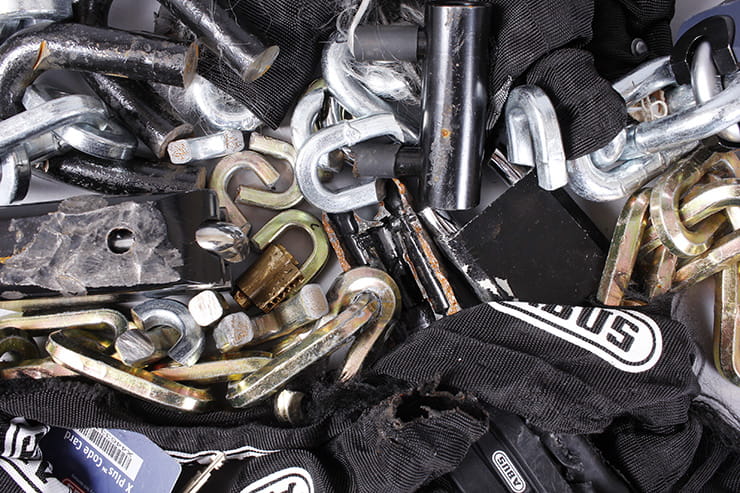 If a thief wants your bike, there’s very little you can do about it. The testing we’ve done here proves that, with the right tools, pretty much any security can be defeated.

But if a thief simply wants a bike, and you choose the right security for where and how you park yours, you’ve got much better chance of hanging on to it. This article explains how we tested the motorcycle security chains and locks, to find out how best to use them, click here.

For this test I worked with one of the UK’s most experienced independent security testers. We also spoke to leading police advisors to determine what techniques crooks are using today. We know that it’s very unusual for thieves to bother attempting to pick locks for instance, but that they can sometimes go to such extreme lengths as using a portable plasma cutter.

Despite what social media would have you believe though, the majority of crooks know that ‘going equipped’ raises their risk of conviction significantly, and that if they are among the small minority willing to threaten bystanders while using angle grinders, they face far stiffer penalties if caught. Yes, police resources are horribly stretched, and it’s true that a dedicated vehicle crime unit no longer exists, but forces around the country are still doing all they can. Your best protection is to buy appropriate security kit, and to use it. 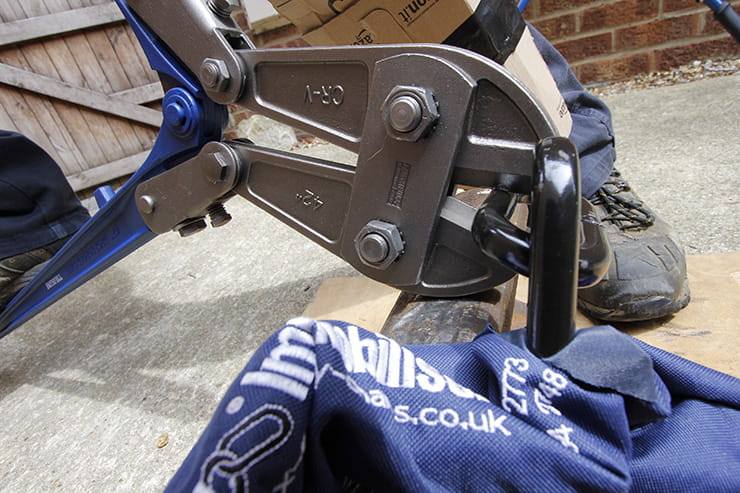 This silent attack is a serious risk if parked in quieter areas. We used a set of 42” croppers, which are very hard to conceal, but if a crook arrives in a van, they won’t be worrying about what they can or can’t carry.

We had two of us testing, each weighing around 13 stone, and for some of the chains we had to alternate due to the intensity of the work involved. Using bolt croppers requires a lot of effort, and the results can vary significantly based on your technique. Our test is based on our findings, and while some of the chains took a great deal of work to cut through, if a crook can work undisturbed, the fact that they’ll make little to no noise with bolt croppers means they won’t have to rush.

Our times are recorded from the moment we started applying pressure to the croppers, the link already positioned inside the jaws. 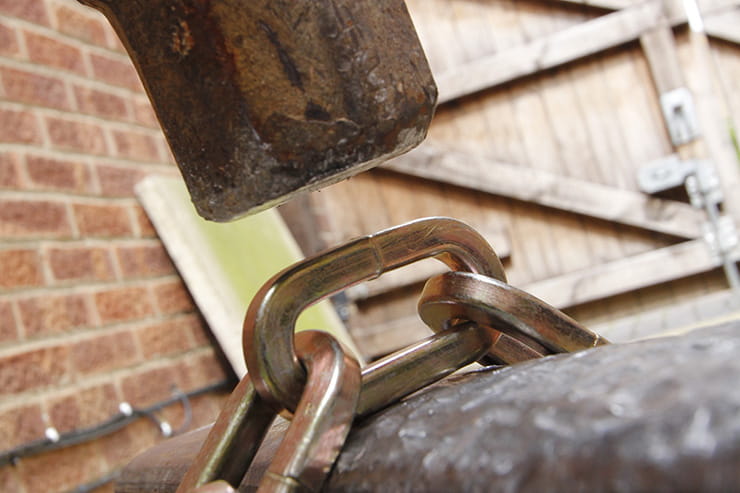 Attacking a chain or padlock with a sledge hammer is incredibly noisy. We had to wear ear defenders, and the noise could be heard over a quarter of a mile away during the day. At night, this would attract a lot of attention.

We created a worst-case scenario, using a length of railway track as an anvil, and giving ourselves plenty of room to work. A crook could easily bring an actual anvil in a van, or simply use another sledge hammer head, so this isn’t unrealistic.

Freeze spray can make a large difference to the time it takes to smash a chain. We couldn’t get reliable enough results to include it as a criteria in our test, but we did make a point of checking all the chains that we were unable to break without it… Put simply, we’ll reiterate that you must keep your chain off the ground, and make it as hard as possible for a sledge hammer to be swung.

Our times indicate the total duration of the attack, from the first swing to the destruction of the chain. Where a link failed in the first few hits, we’ll indicate this. Keep in mind though that times are a guide only – using a sledge hammer is not a precise method as the intensity and position of the strike can vary. 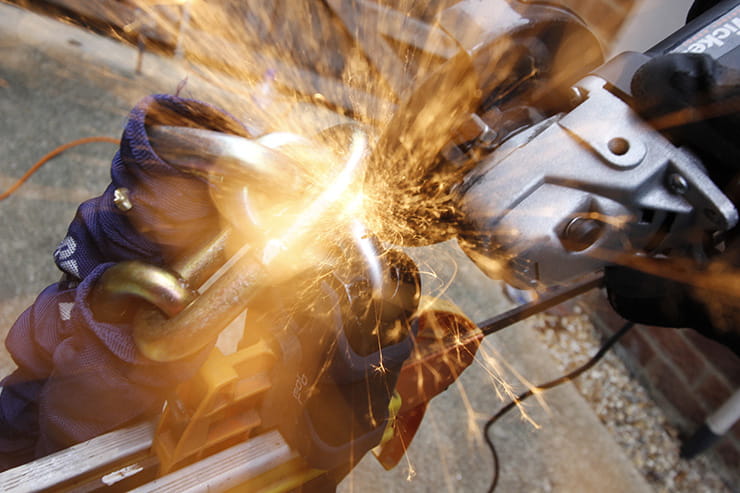 If working in your garage, crooks may well have access to power, but otherwise they’ll most likely be using a battery-powered grinder. One battery pack is more than enough to power a grinder through a chain, but when testing dozens at a time, even with one pack on charge while we worked with the other, the charging delays made this impractical.

We used a 115mm mains grinder with 1.2mm-thick cutting discs as this gave consistent results, and on all but the very thickest of chains, the cutting time was very similar between this and the battery-powered grinder. Our results show the total duration of the cutting, from starting the grinder, through flipping the chain, to fully breaking the link.

We also tested a petrol-powered pavement cutter, but with the thicker discs this needed, it had no advantage.

When cutting padlocks, we attacked the weakest point – the shackle. We did this with the chain in place, to see if the link dimensions made any difference to the attack; in some cases we were able to cut through the shackle, but not close enough to the lock body for the links to be removed.

It’s worth noting that, while some chains were significantly harder to cut with an angle grinder than others, the difference in time between the best and worst is a mere 30 seconds.

None of our results should be treated as a guaranteed time of attack. Tools and techniques will vary, not to mention possible variations between each chain’s link. But as a comparative guide, with repeatable, consistent testing methods, we believe that this product test will help you choose the security that best suits your circumstances.

To understand how to use your chain and lock, click here.

How we tested chains and locks