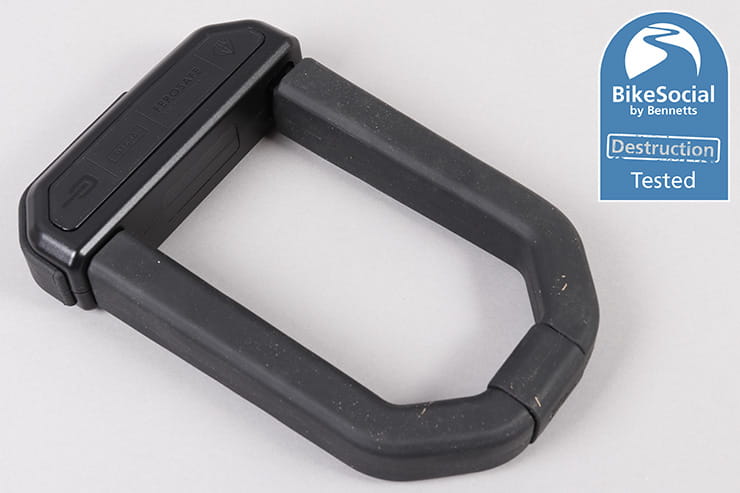 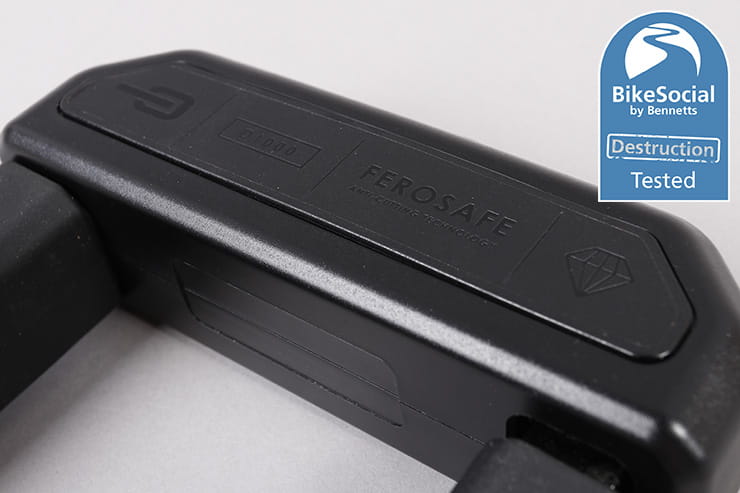 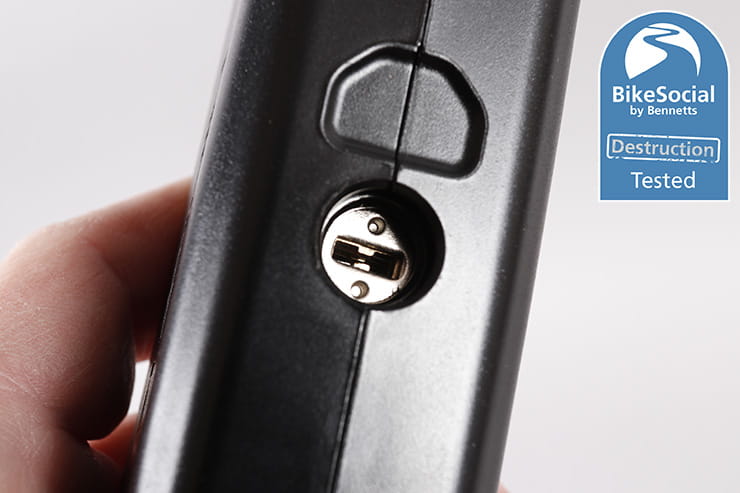 The Hiplok D1000 uses a composite graphene material designed to resist angle-grinder attack. With this being one of the most common forms of motorcycle theft, it could make it one of the best locks you can buy.

The shackle is covered in a thick silicone sleeve that protects your bike’s paintwork (this is most likely to go around the cast spokes of your motorbike’s wheel), while the lock body is encased in plastic. 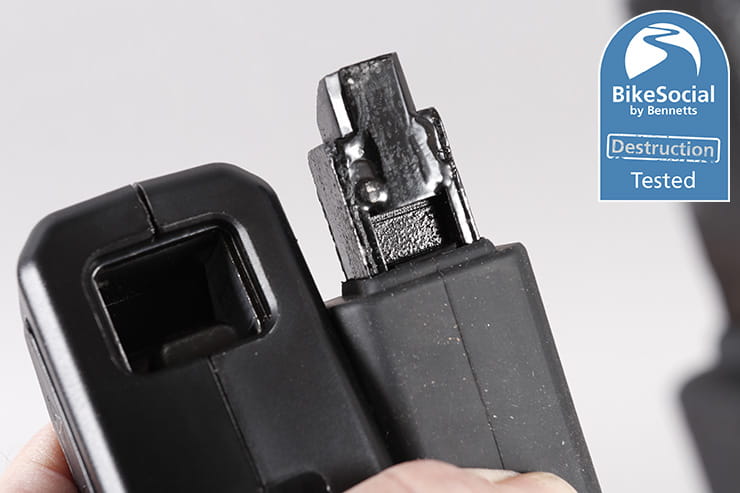 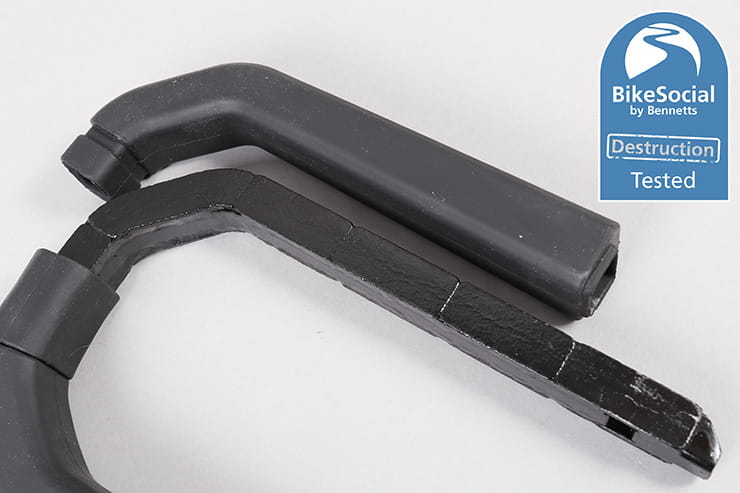 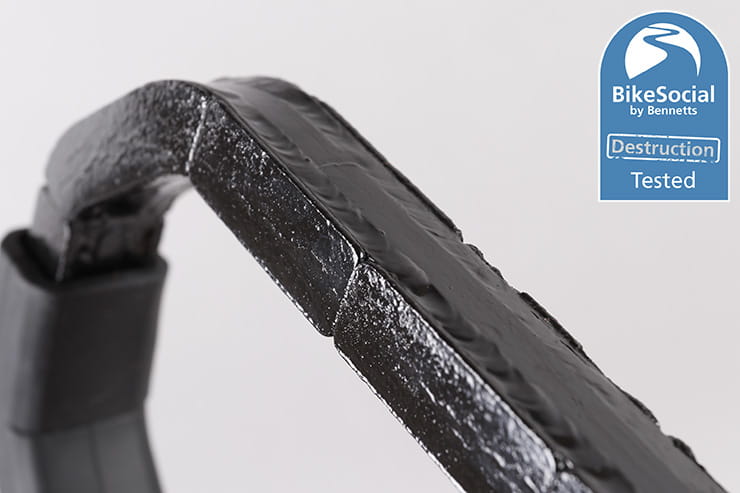 The shackle is locked at both sides with steel plates in the lock body, while the layered construction is covered with a tough silicone sleeve

As a bit of background, I’ve been asked to back Kickstarter campaigns before, but always refused until I can have a product in my hands to properly test. Hiplok did not contact me to review this lock – in fact I only heard about it during a meeting with the industry testing body Sold Secure, as it’s the first U-lock (or D-lock) to achieve the high Motorcycle Diamond standard. This means it’s beat the full range of attack methods that are in use during motorcycle thefts, something usually only achieved by the very biggest locks and chains.

Relevant testing is important, and picking simply isn’t an issue in motorcycle theft, but of course the lock uses a double-sided high-security barrel that’s in some ways like a wafer cylinder, but it’s far more complex. There are three keys supplied (which are coded and can be replaced), and the key-way is protected by a silicone flap that tucks in easily.

I contacted Hiplok and asked for a D1000 to review, and while they were curious what I’d do with it, they made no attempt to influence what testing would be done. We will never ‘review’ any lock that we haven’t thoroughly tested. 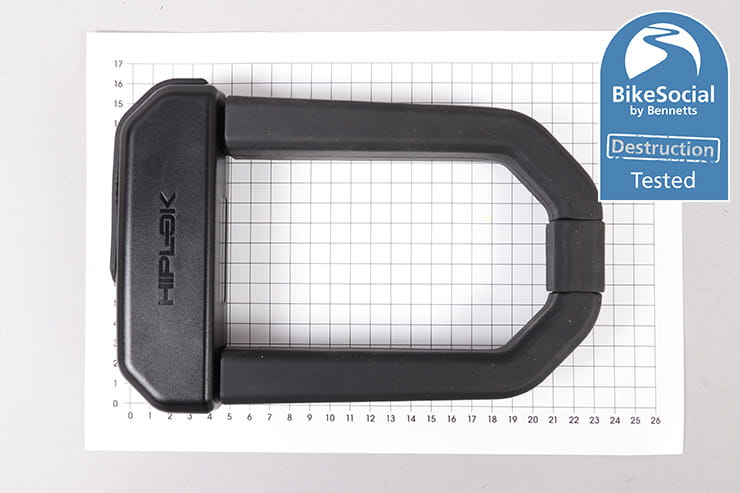 Weighing 1,951g, the Hiplok D1000 has an internal shackle size of 9cm x 16cm, making it fine for putting around most cast wheel spokes, but too small to go around a wheel and tyre.

I wouldn’t recommend this on a bike with steel spokes, but on cast wheels it’s far more effective than a disc lock, where the brake disc itself is the weak point that gets cut.

Hiplok is exploring the options for larger versions of this lock, but the reality is that it’s big enough to stop most bikes being pushed away, which is the most common form of theft.

The shackle itself, which is a welded, layered construction, measures 20mm x 15mm, while the silicone cover takes it up to 32mm x 24mm. That means that you’ll be unlikely to be able to slide most portable chains around the entire shackle, but fortunately there’s enough give in the sleeve that you can get a chain on there – just check the internal dimensions of your chain are greater than 20mm x 15mm. I use an 11mm Pragmasis chain when I’m out and about, and that fits fine (the large noose end of course slips over no problem). 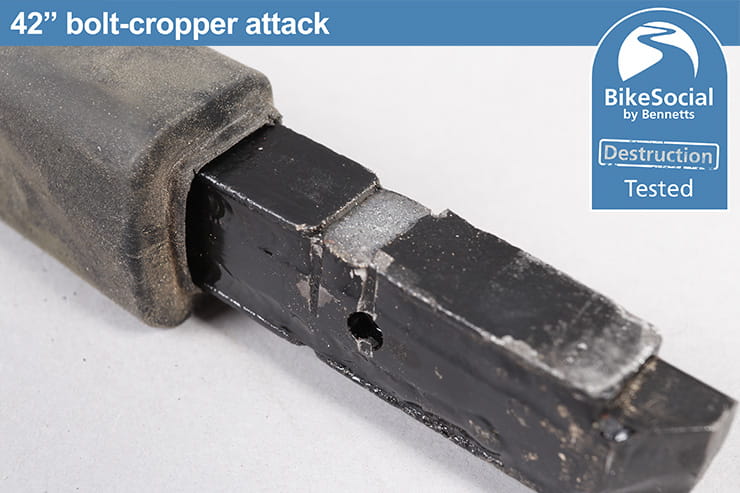 Using 42” bolt-croppers I was able to get a pretty good purchase on the shackle once I’d pushed the silicone sleeve out of the way, but while one of the thin outer plates did come off and there was clear damage from the tool’s jaws, there was no way I could get through it. 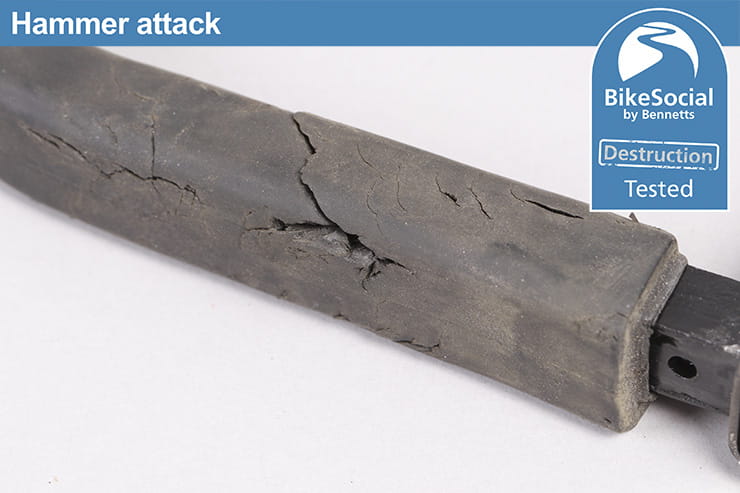 On chains and locks I test with a sledge-hammer and anvil, but a U-lock will always tend to be on the bike, so I stuck with the lump-hammer attack I use for disc locks.

The plastic shroud soon shattered off the lock body, but no matter how hard I tried, I couldn’t even start to release the lock.

Two Allen-headed set screws and another with a pozi-drive head were revealed under the plastic, but removing these didn’t make any difference to the lock – you can only disassemble it when it’s open. 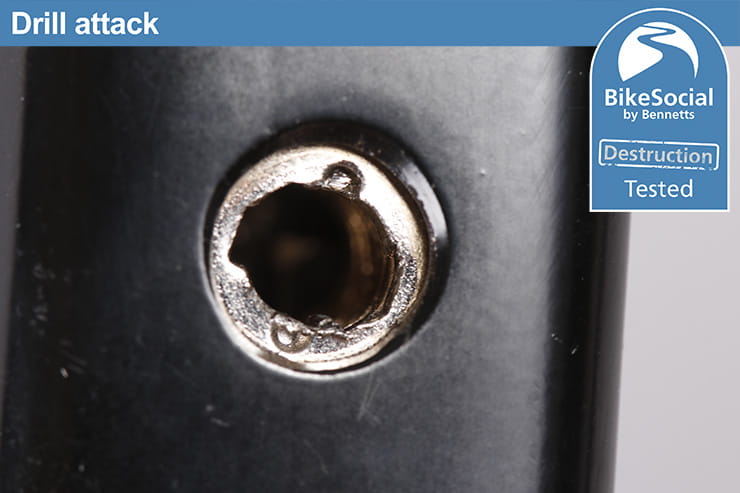 While it put up a fair bit of resistance, once I’d breached the outer plate of the lock body I was able to drill through the core. However, the fact that the shackle is retained with two plates that slide out when the barrel is turned mean I had no way of getting the lock open. With further work it’s perhaps possible that this could be a way in, but it’s certainly impractical in the field. The only point I’d note is that this attack had freed up one of the locking plates, so when I’d completed one cut with the angle-grinder, I was able to get half the shackle off. The other half is still refusing to release so I don’t have any issues with a drill attack. 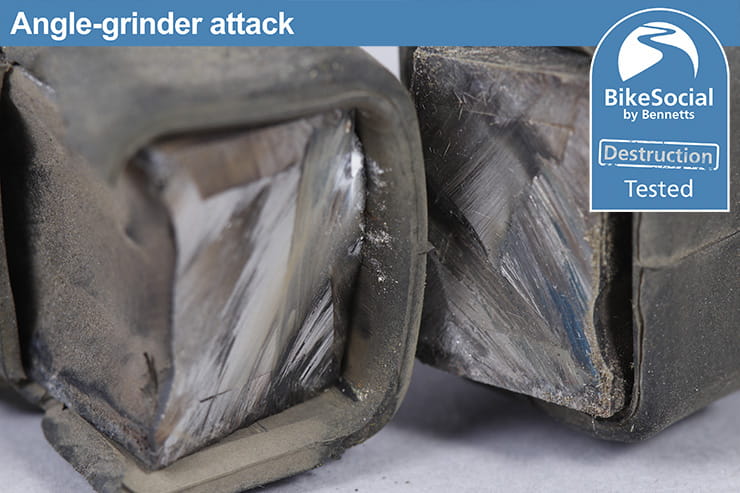 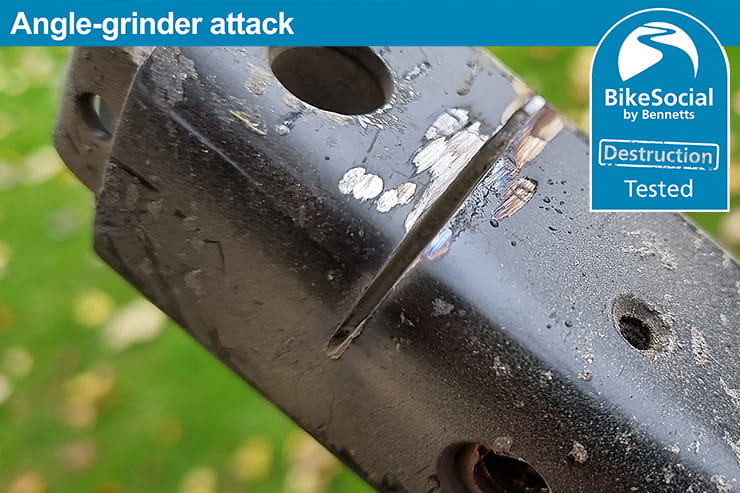 If a thief is going to use tools they’re ‘going equipped’, which has far greater implications if they’re caught. But if they do they’ll almost certainly have a battery-powered angle-grinder.

For consistency in my testing I use a mains grinder with 1.2mm cutting discs. The most it’s taken is one and a bit discs to get through a 22mm chain, but here I needed two and a half, which is incredibly impressive.

One thing to note is that while the square design of the shackle means it can’t be rotated when it’s been cut once to get it off, there is enough slack in the mechanism to pull it apart and slide it over some cast spokes. If you can get it around two spokes that’s not an issue, and as it takes so long to cut anyway, it really isn’t a problem. On most U-locks I test, the fact is that one cut releases them, so it can be a weak point; taking this long to do one cut means it’s irrelevant.

I also attempted to cut the lock body, and while the disc got through the hardened steel outer, the combination of an aluminium core caused it wear down extremely quickly – one disc only got through a small section of it, as you can see in the pics above. 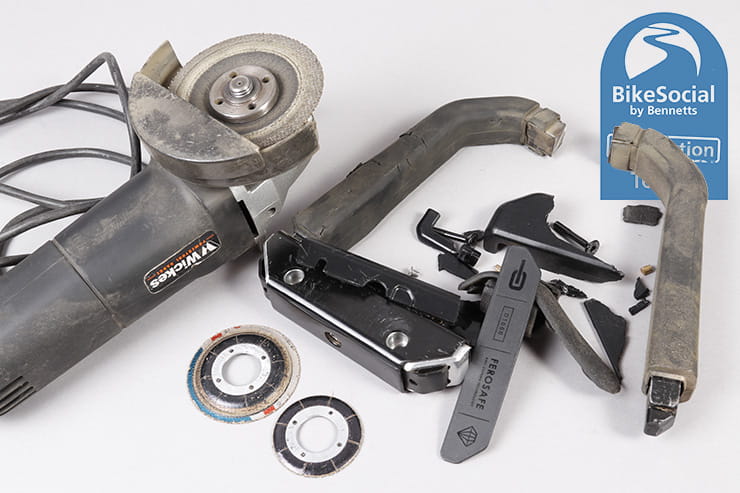 A U-lock will stop your bike being pushed away, which is one of the most common forms of theft, and while a portable chain can’t – for now at least – offer the same level of protection against an angle-grinder attack as this will, if you put this around your bike’s wheel and attach a chain it’s like having two locks; the criminal will have to first cut the chain, then they’ll have to work out how to get this off, or pick the bike up and put it in a van. Yes, that’s a possibility, but any security significantly reduces the chances of a bike being stolen, and this offers the best protection against the most likely form of tooled attack.

Nothing is completely impenetrable; I’m sure the LockPickingLawyer will pick it using high levels of skill and practice in a controlled environment, but that’s irrelevant on the street in a real attack. This is, without doubt, the most effective portable security device I have ever seen. No brute force attack would get through it, and while a small bottle jack could get into the shackle on some bikes to try to lever it apart, there’s very little space available and this is a very toughly made device. 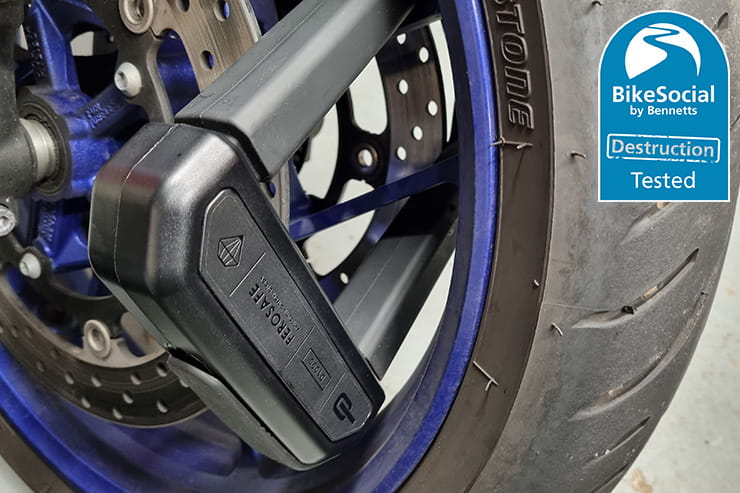 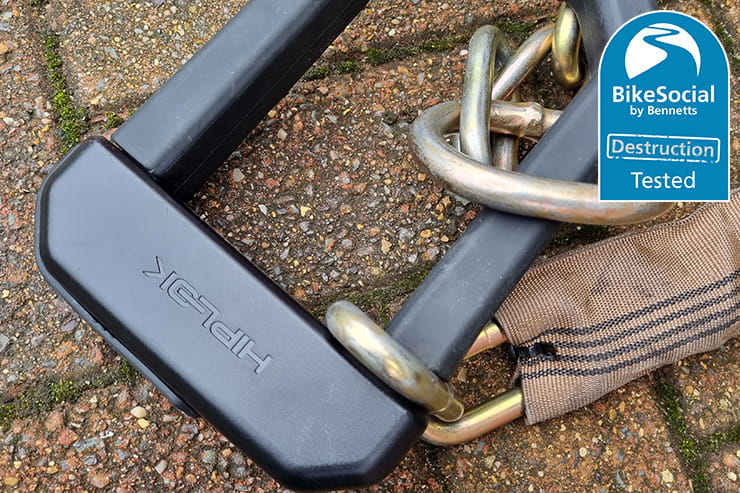 The Hiplok D1000 fits around most cast wheels with ease, and it is possible to slide a chain on

Undoubtedly, this is much better than a disc lock as the thief is far less likely to cut the spokes on a cast wheel than a brake disk, so while it’s not cheap, it is extremely effective and absolutely recommended.

Using ANY security significantly reduces the chances of your bike being stolen, as we found out here, so this new product of course doesn’t mean all the other locks out there are useless. Though in the same way that when I’m out and about I’d prefer to lock my bike next to one that’s got no security on it, I might think twice before parking next to anything with one of these on, because if they’ve got a chain too, my bike would be the easier target.

To see the other chains and locks tested by Bennetts BikeSocial, click here and be sure to regularly check for the discounts available through BikeSocial membership.

Watch the full attack test of the Hiplok D1000