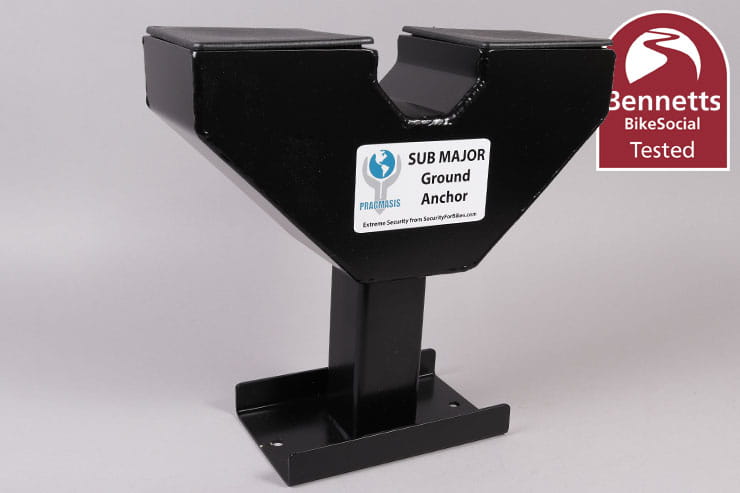 The Pragmasis Sub Major on review here is a bury-in ground anchor designed to offer exceptionally high levels of security with chains as large as 22mm, giving your motorcycle or scooter the best possible protection against theft… 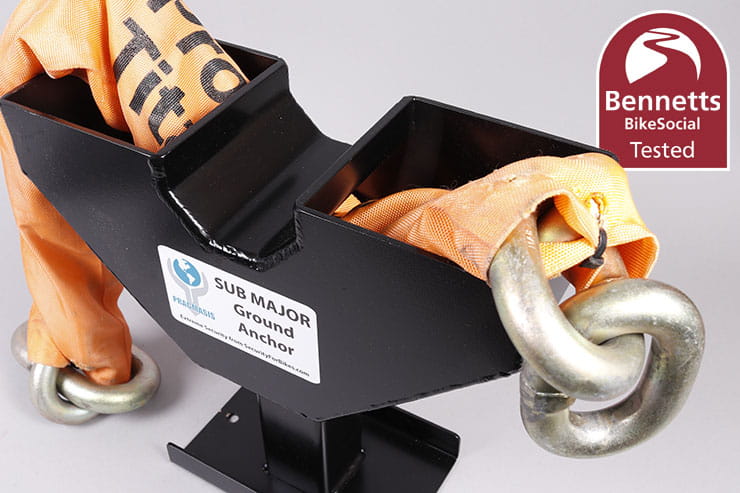 Made in the UK using laser-cut and folded steel, the Pragmasis Sub Major is an extremely solid piece of kit, with a very well-applied protective coating inside and out.

Comparisons will inevitably be drawn between this and the well-established Y-Anchor, but the construction methods are fairly different. Of course, once buried, you won’t see much of any anchor like this, but I particularly appreciate the plastic cover plates that are supplied with the Sub Major – when not in use, you can pop these in to avoid anything dropping into the holes; especially useful if the anchor is to be fitted somewhere people might walk when the bike’s not secured. 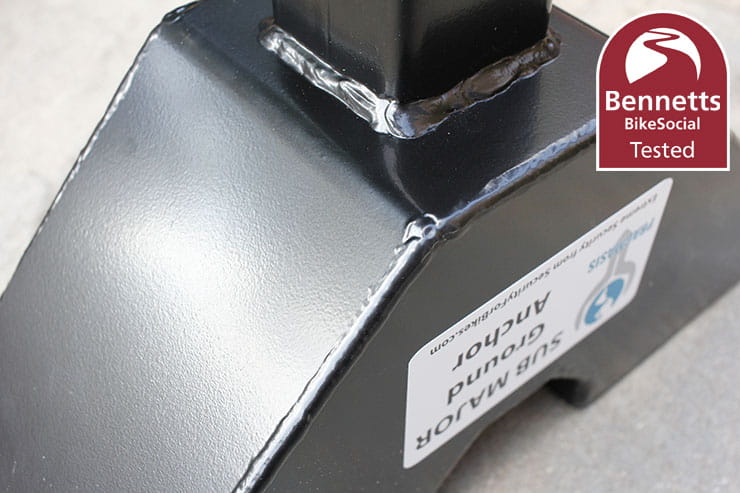 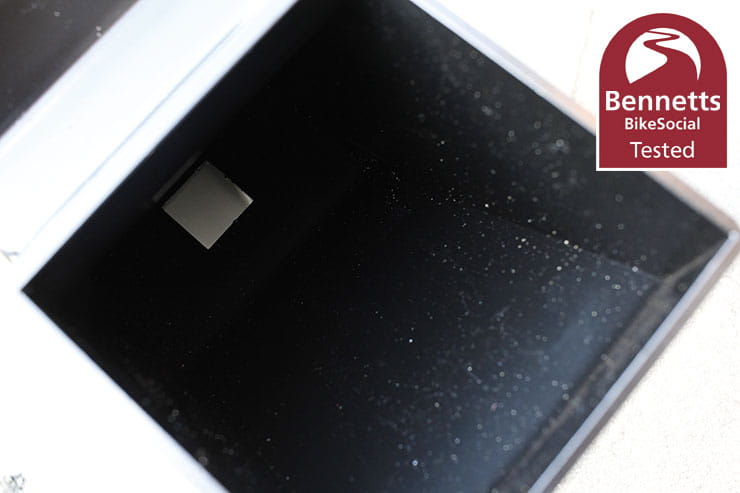 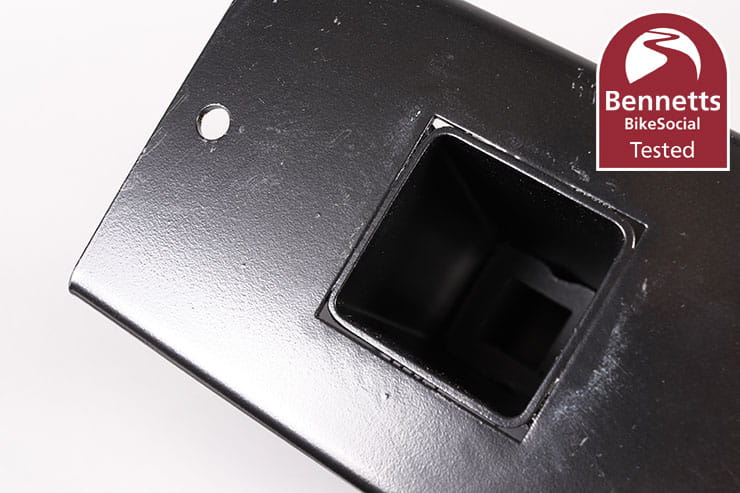 It’s worth noting that Y-Anchor has recently introduced optional steel cover-plates for its anchors, costing an additional £29.99 to £39.99 (plus delivery).

There is of course a drain-hole built into the Sub Major, which allows water to soak away into the hardcore base recommended when digging out for it.

The Sub Major is only available in one size, but it’s big enough to easily swallow a 22mm or even 25mm chain, or multiple smaller chains. 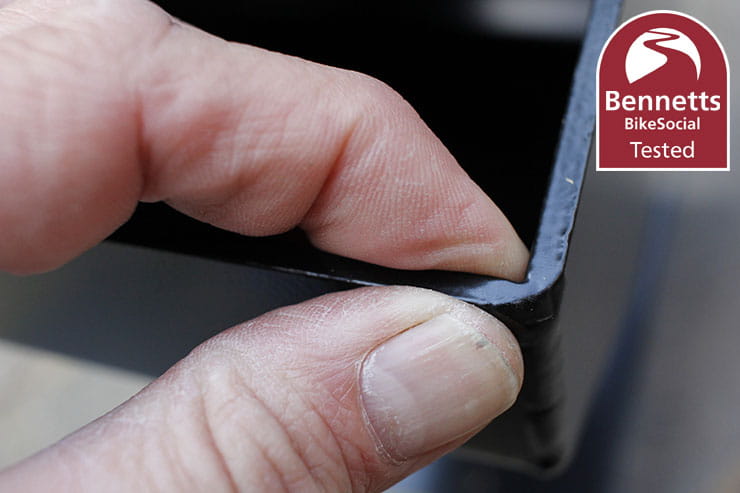 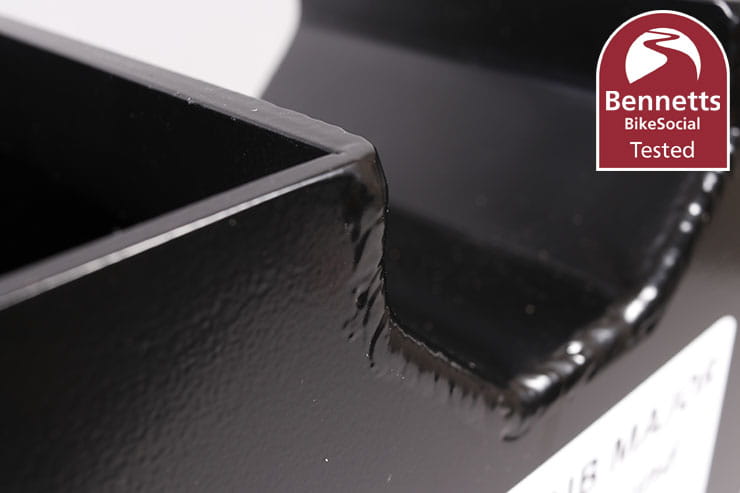 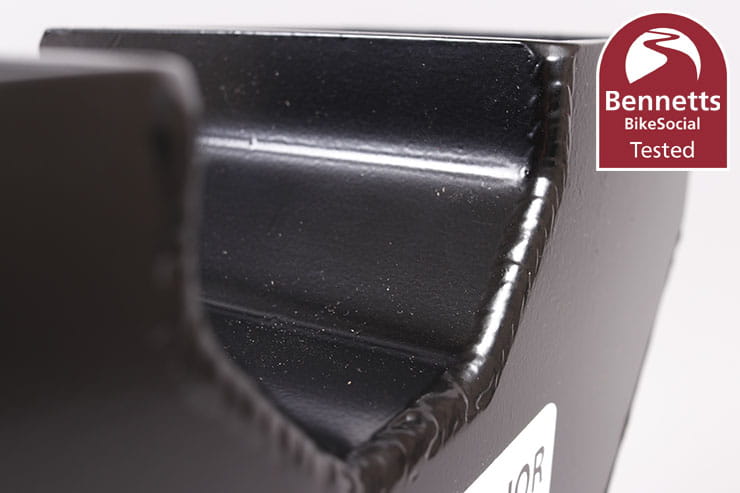 We’d expect to see others achieving this rating over time, and you should always check the Sold Secure website for current approvals, but it’s great to see a product scoring so highly. 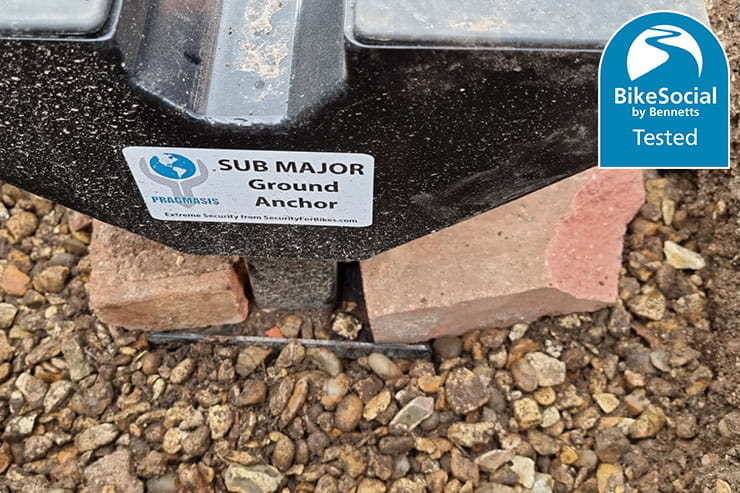 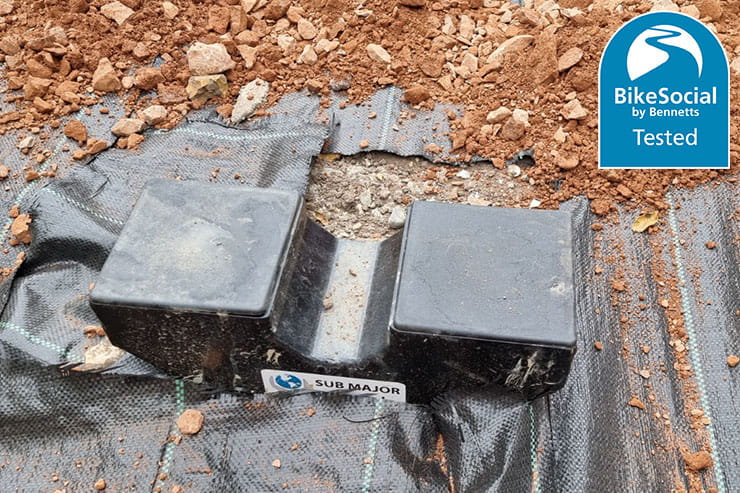 While you will need to dig a hole of at least 450 x 300mm, to a 450mm depth, this is actually a bit smaller than the 550x550mm recommended for the Y-Anchor 120, thanks to the more compact design of the Pragmasis.

Very clear instructions are supplied with the anchor, but you will of course need to supply the concrete – around 120kg of it. The equivalent-sized Y-max120 requires around 295kg.

We gave a Sub Major to BikeSocial member Mike Davies, to find out just how easy it is to fit…

“The diagrams in the instructions are clear and give a great overview of how the fitment should proceed. Like a lot of people, I find it easier to visualise a process like this instead of following listed instructions. I liked the emphasis on ensuring the unit sits on a gravel bed to allow drainage as this could easily be overlooked and impossible to rectify! It also made it simple to adjust the anchor and hold it level while filling the hole with concrete.”

Because Mike was fitting the anchor within a gravel grid system, he chose to leave the top area as gravel, rather than bringing the concrete all the way to the top; “I used far less concrete than specified in the instructions and just judged it based on the remaining volume in the hole once the anchor was in place. I was worried that only filling the hole to the mid-level of the main anchor body would not be sufficient, however the anchor is so solid that even this is more than enough to make a very firm hold! I could have filled it to the top and had a top layer of concrete showing, but I decided to have the gravel grid up to the edges of the anchor, mostly for cosmetic reasons (although I think the way the gravel sits in the underlying interlocked grid would make a chisel tip bounce straight back at any potential thief!).

“I am incredibly impressed with the unit. As I said, even filling the hole up to half with concrete gives an incredibly strong hold. This anchor will never be the weakest part of my bike security system – the chains and locks would be the likely point of attack” 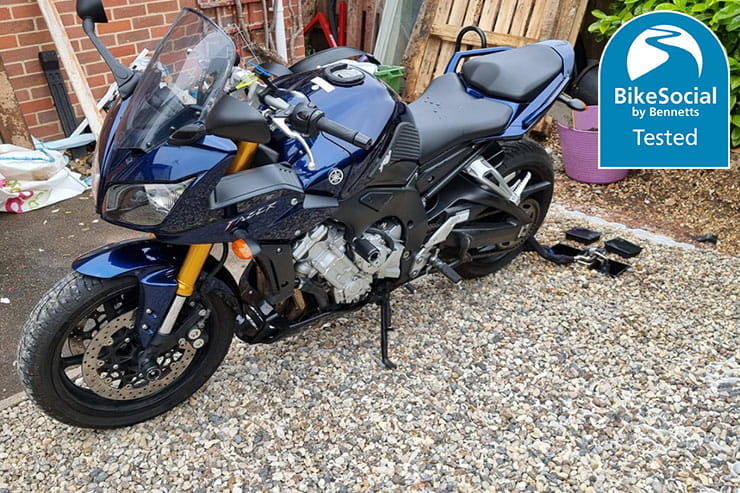 Mike’s fitting showed the versatility of the Sub Major ground anchor, though Pragmasis does advise that concrete is poured up to the top edge of the unit; “The base of the anchor is secure in Mike’s setup,” Stephen Briggs, Engineering Director of Pragmasis told us. “Arguably though, the top bit – and particularly the inner bridge, being the most crucial part of the whole thing – is not surround by concrete so would perhaps be more vulnerable to a thief clearing the gravel away and attacking it. However, during testing at Sold Secure, even with no concrete it easily passed the five-minute grinder attack time of the Diamond rating requirements. The depth of the inner bridge is such that it’s pretty much beyond the reach of 4.5” grinders, so it’s going to be very tough regardless of concrete giving protection to the top, or not.

“Personally, I wouldn’t encourage people to leave the top exposed as I think it looks inviting to a thief, so they’d be more likely to have a go at it just because it looks like it might not be fixed firmly; I always prefer to give thieves the ‘turn-off’ as soon as possible, without them groping around and perhaps causing damage in their investigations.

“We fully support the move away from solid and impermeable drives and front gardens as hard surfaces aren’t good for the natural habitat and wildlife, but my advice to anyone working with a SuDS (Sustainable Drainage System) would be to bring even a small amount of the concrete to the surface, so it’s got a visible concrete surround. It doesn’t need to be a lot, particularly as we deliberately made the ‘footprint’ across the two openings as compact as we could for that grade of anchor.”

Ultimately, the Sub Major is designed to be encased in concrete, but it’s testament to Pragmasis that it’s still so incredibly tough even when it’s topped with gravel. 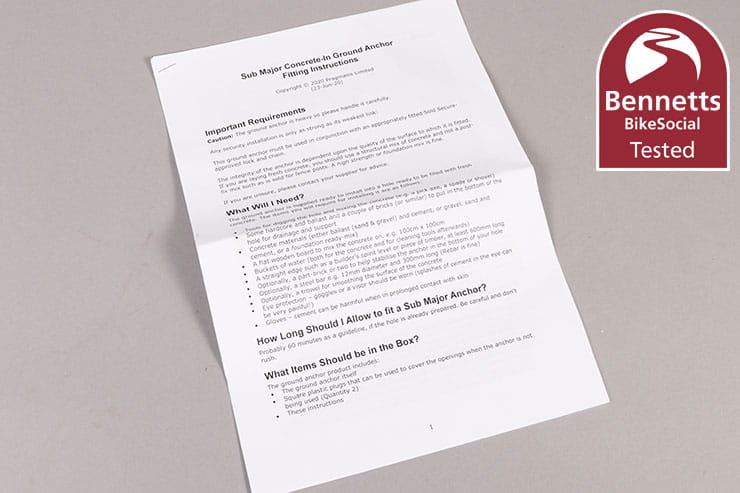 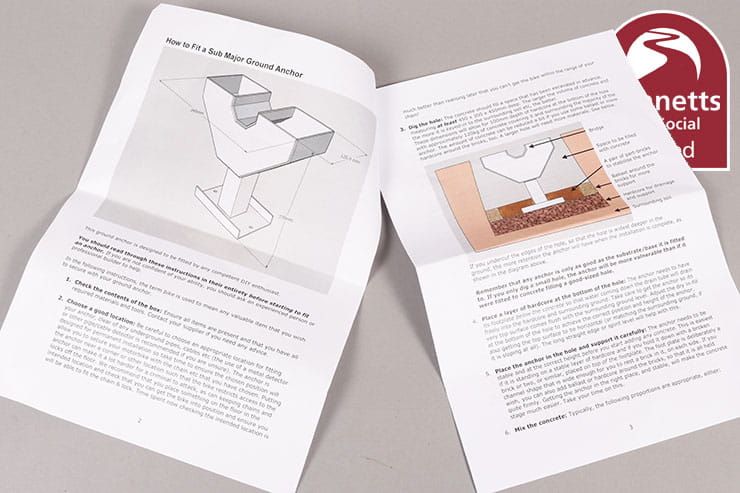 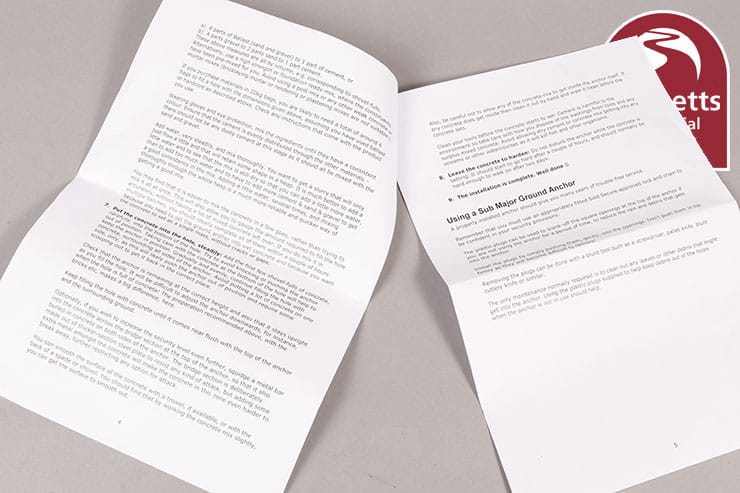 Passing a chain through is simple, if a little more fiddly than a loop-type bolt-in anchor, but if used at home there’s a good chance most owners will leave the chain in place.

The plastic plugs are effective at sealing the holes, but they can be a little fiddly to prize off at times; I’d probably drill a hole in each to get my finger in to ease pulling them out, or perhaps two small holes that a short piece of nylon rope can be looped through; small enough to not represent a trip-hazard, but just big enough to get a finger through. Note that Pragmasis has tweaked the Sub Major's dimensions, so the plastic plugs are said to be easier to remove now.

Having the anchor flush to the floor means it’s far less likely to get tripped over than a traditional bolt-in anchor, though once the chain’s in, it doesn’t make that much difference.

We’ll update this review with Mike’s thoughts as soon as he’s fitted it.

For the best chains and locks to use with this ground anchor, read our reviews of the best motorcycle and scooter security. 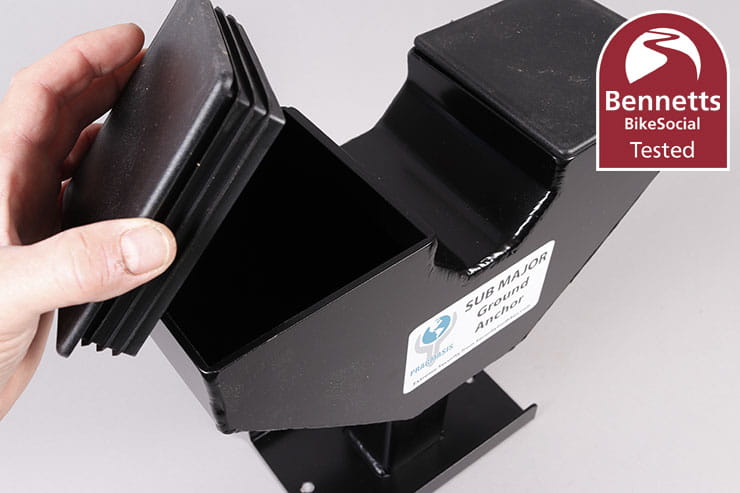 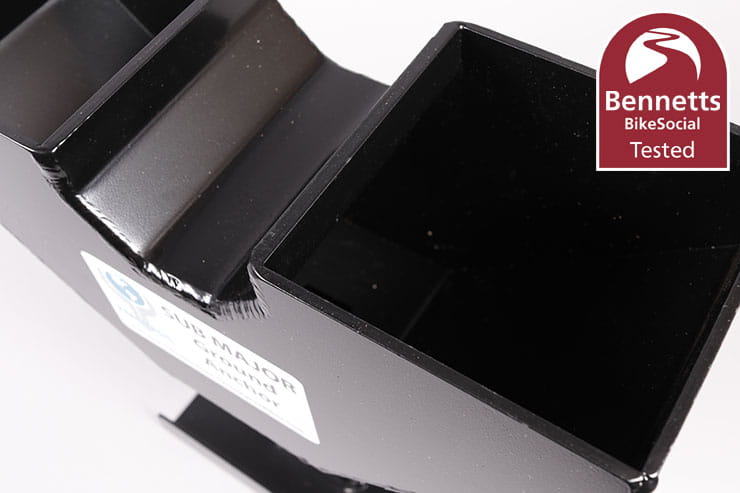 It’s incredibly unlikely that this ground anchor will be attacked – cutting the chain will always be quicker than the huge amount of noise and time involved in digging something like this out.

This is a very serious bit of kit offering exceptionally high levels of security, and while personally I chose to fit bolt-in anchors to my shed and garage (I bought the Pragmasis Torc anchors), a bury-in anchor like this can be securely fitted into many more locations, including block-paved drives, tarmac and even gravel driveways like Mike’s. This is without doubt a security device that’s well worth considering.

To find the best motorcycle security, including chains and lock, disc locks, alarms, trackers and more, check out our destruction test reviews.

How to make a secure shed