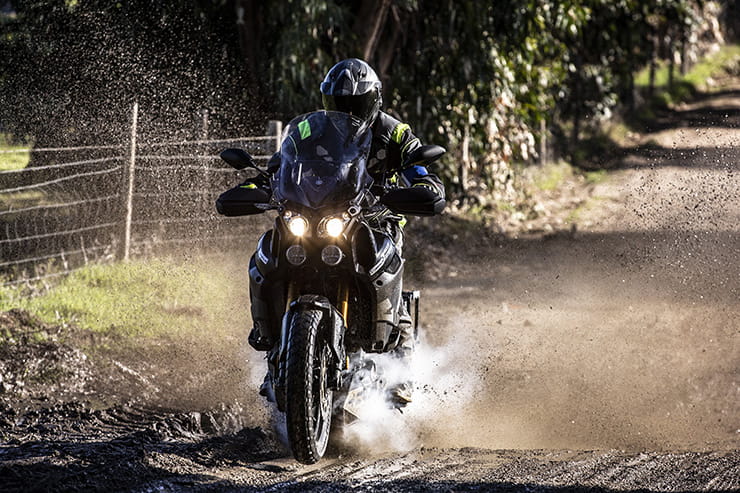 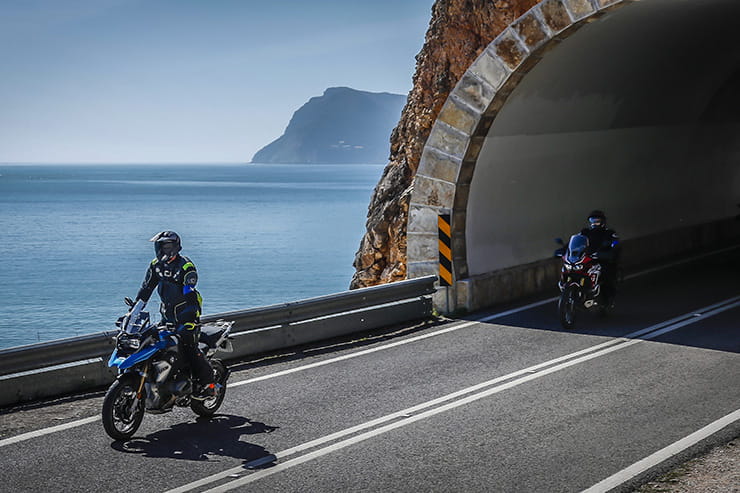 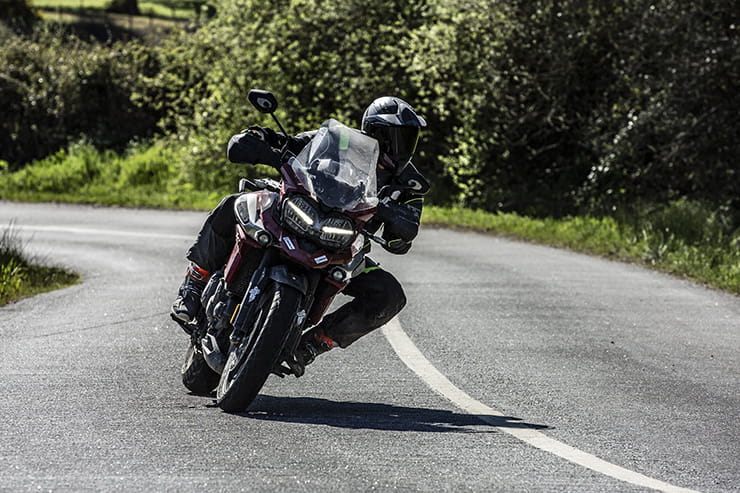 When adventure bikes were growing in the market, manufactures were scrambling to find the best tyres. Now established as the biggest market sector, they are looking for a range of rubber that suits individual riding styles and capabilities.

The new tyre was developed with BMW as their OEM tyre for the new GS1250.

Jeff Roziere the chief designer of the Anakee Adventure said: “BMW have a high expectation and we see synergy with our brands from an innovation and technology point of view. The Anakee Adventure’s road capability is defined by how well they work in both wet and dry conditions.”

The new tyre sits between the Road 5 and the Anakee Wild. The Adventure is aimed at owners of adventure and dua-purpose bikes looking for sport-touring performance whilst riding on the road without sacrificing off-road capability. These are the type of riders who own high-spec machines and ride long-range tours that includes include off–road. 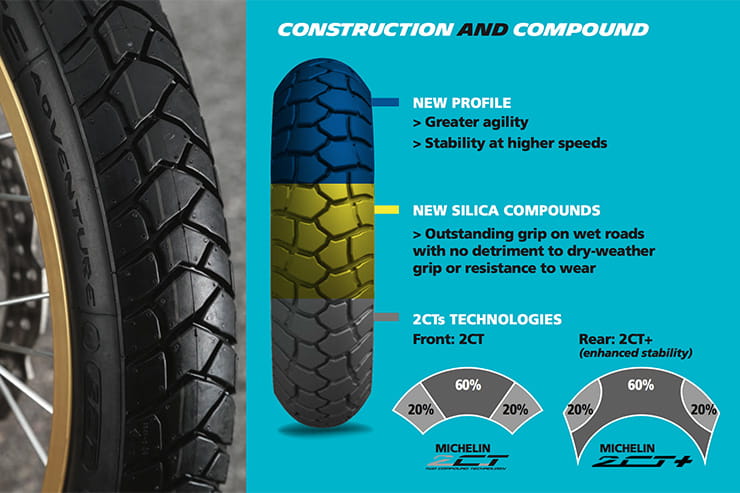 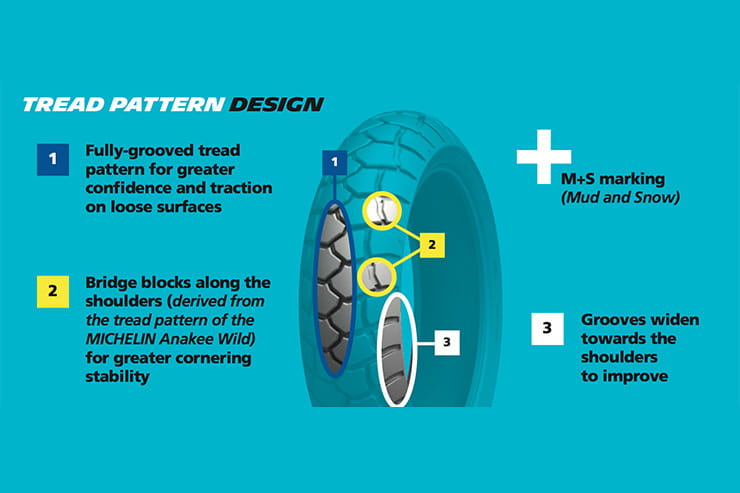 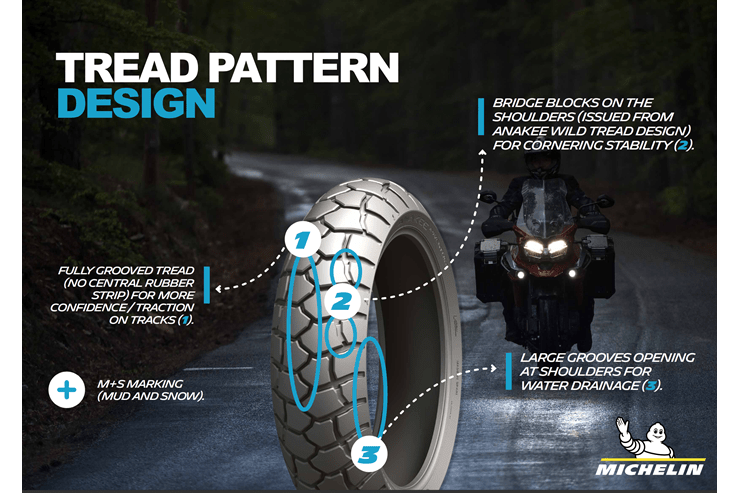 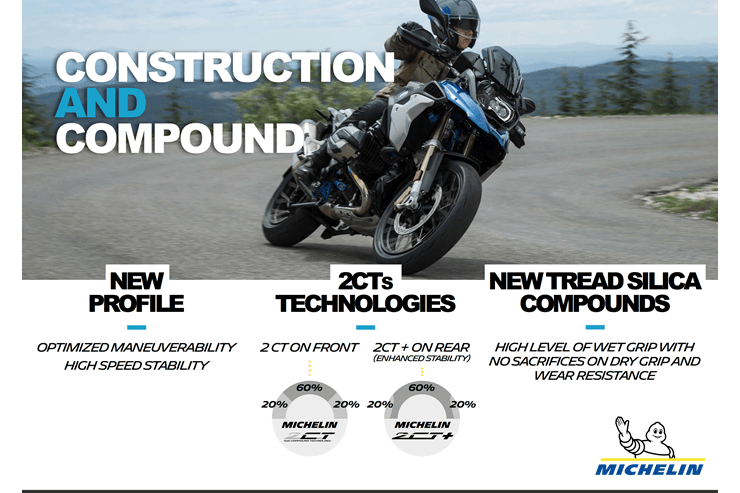 The Adventure uses the same carcass as the Anakee 3. So what is different in the new tyre?

The is a new profile and tread pattern that offers more agility and better high speed stability. There is also a new compound and silica that was developed on the high speed radial road tyres.

Michelin’s test rider Dean Baudart says the tyre industry use lap times as the universal measurement when judging performance. Michelin test riders test new tyres blind, i.e. they are given a number of tyres to test and they do not know which tyres are fitted.

They have a benchmark control tyre that they recognise and need to pitch the other tyres against. They then work to make the other tyre better.

The Anakee Adventure was tested on track and they were 2 to 3 seconds a lap faster than Anakee 3.

Because you need a tyre to work across the heat spectrum the Adventure was tested in summer and winter conditions.

Most adverse weather testing is done in light rain, these conditions are most dangerous because you are more likely to keep your speed up and lean the bike further in corners. It is also where there is least surface grip with dirt and oil just above the surface.

Silica Compound: Michelin use a compound they call Michelin 2CT in the front tyre and Michelin 2CT+ in rear which was first used in 2005 on the Power Race which is a road tyre.

Both the front and rear tyres are dual compound. The reason for this is to create stability but also to find the best compromise between between wet and dry grip.

The centre 60% has a slightly harder compound for better wear and stability and the 20% shoulders are softer to get more grip when the bike is leaned over.

Stability and longevity in a tyre come from the carcass stiffness and how – and where – the compounds and tread are laid.

Tread Pattern: As this tyre is 80% road biased the challenge of building a tyre that has is neutral safe and comfortable especially when turning and at speed is a big one.

The stand-out feature in the tread pattern is the new bridge blocks along the shoulders. They are recessed so allow for water dispersal and off-road capability. The blocks make the tyre more stable with less movement on the road. This makes an off-road tyre feel like a road tyre in performance.

When you use a slick there is no tread and a full contact patch. The result is no movement at all of the tyre tread. When you add tread, the more groves you have and the wider they get, the more movement there is in the tyre. A full wet or knobbly on the road has the most movement. It can feel like riding on chewing gum.

The large contact blocks maximise the grip on the road. The block to gap ratio has been optimised across the tyre for best performance at different lean angles. The crown is more compact for straight-line stability at higher speeds and the grooves open gradually towards the shoulders to increase water clearance. The pattern is grooved across the entire crown.

Grip: Dean Baudart says: “There is far less margin between competitor’s tyres on grippy surfaces. When testing on low adhesion surfaces there are greater differences between the performance of tyres.”

Tyre manufactures use a scale to measure surface grip ranging from 0-1.

If 0 is equivalent to a wet white line on the road then 1 is like a newly surfaced race track.

The Anakee Adventure was tested comprehensively in Greece as the roads are rated just above a slippery white line. 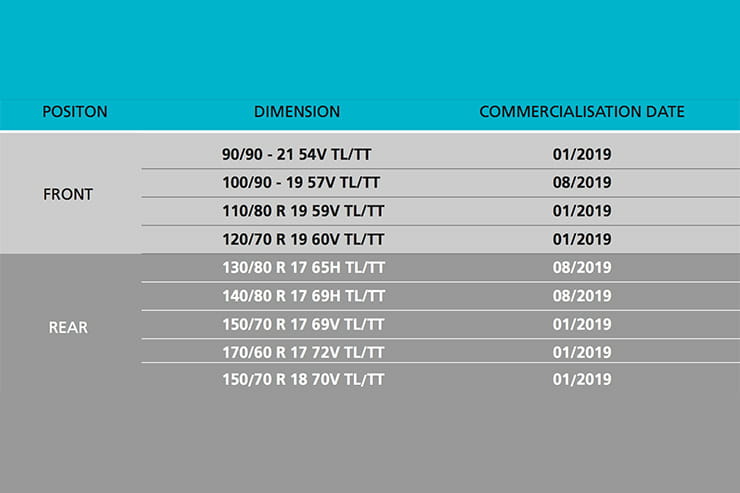 Large adventure bikes are more than capable of cruising at 130 mph both on and off road. They need a tyre capable of this, often loaded with a pillion and luggage. The Anakee Adventure is just such a tyre. 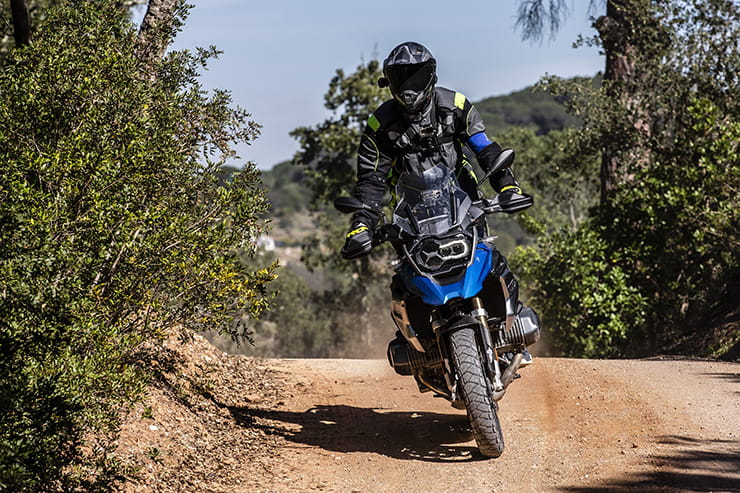 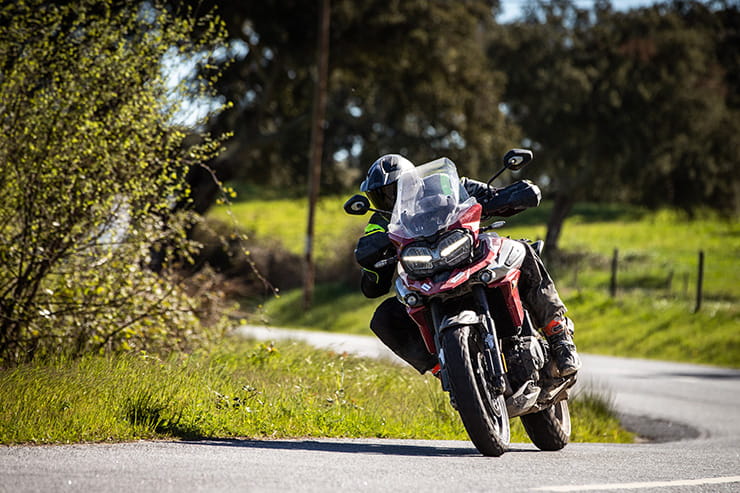 I rode from Lisbon to Evora in Portugal.

There were cobble stones with sand, moss and gravel between in the cities. There were metal tram tracks and numerous manhole covers. The roads around and along the way offered the perfect testing ground for the tyre, we did a 220-mile loop on a range of bikes including BMW GS1250, Honda Africa Twin, Yamaha Super Tenere and Triumph 1200 XRT

I started on the BMW, the tyres felt totally planted and neutral. They felt comfortable and plush on the road. I was unsure how much of the feeling came from the tyre or from the BMW suspension. I swapped bikes and rode the Honda Africa Twin next, this bike is light and more focused than the BMW, I got the same feedback on the Honda from the tyre which was was confident and comfortable.

On road the tyre felt like a road sports touring tyre. There was no vibration or indication that the tyre even resembled a knobbly, the bridge blocks really doing their work. Nothing seemed to phase or upset the bike.

Crossing the roundabouts was the first test of cornering agility. The bike rolled in and out effortlessly. The profile is so neutral and forgiving. There is no obvious transition from the middle of the tyre to the shoulders.

As expected, braking hard for corners the front felt planted and never gave any indication it would give up. I carried a bit of front brake into the bends to see how it felt – loading the front under braking – and the steering remained stable. Dabbing the back brake or trailing in hairpins never created any moments either.

I also held the brake travelling in a straight line and then changed direction to see if the bike would push wide, it just went in the direction I asked it to.

Further down the road in the tighter bends it gave me the opportunity to lean the bike right over. On an adventure bike I am never sure if I should be the tool dragging a knee on the ground in perfect knee-down conditions. A few corners in I had to remind myself that I was not wearing knee sliders and if I had put my knee on the ground it would end up with a trip to A&E. The planted profile with all the grip in the world made it so easy to put the large bikes from one ear to the other.

On the coastal road I very quickly forgot I was testing anything, the view was majestic and the best compliment to the tyre is that I had stopped worrying what it could do or how far I could push it.

The single track path with a fairly uneven surface was a good opportunity to test high speed handling. I was completely comfortable at speeds three figure speeds, the tyre just tracked over the surface. Changing direction quickly was a breeze.

Like the Michelin road radials, the tyre was stable, so I could concentrate on reading the road, rather than think what the rubber was doing –  I didn’t have to second-guess how much grip I had, I could just trust the tyre. 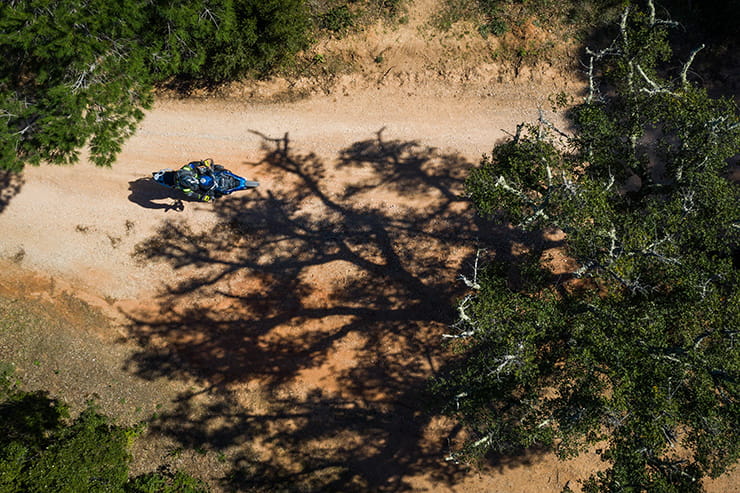 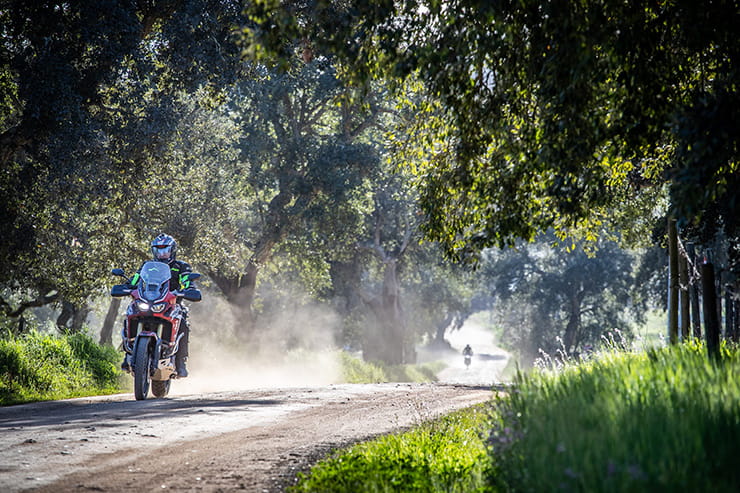 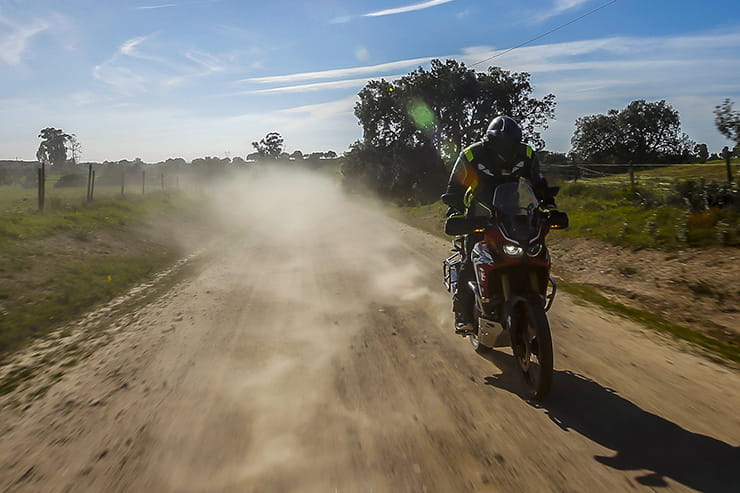 You want stable and easy if you are stuck out in a remote and potentially hazardous place.

The first off-road section was a narrow lane with blind corners and unexpected turns both up and down hill. Riding down-hill on a large adventure bike with a road-biased tyre would usually raise some sort of alarm. Having to turn on the brakes pushes the front tyre. I was cautious and progressive and never had any moments running wide or skidding into the turns. I found the traction control and ABS very restrictive and un-predictable so I turned it off.

The the second off-road section the roads were wide open gravel tracks and you could see some distance ahead. I was completely comfortable at high speed. It felt like an A road just a gravel one. Our lead and camera bike both had pillion riders. They seemed perfectly comfortable riding at speed on the gravel.

Riding different bikes back to back is a good test of a tyre, some bikes like the Yamaha Super Tenere have the thumper characteristic. The Triumph 1200 XRT feels like a Japanese inline sports bike. They develop power differently so it was interesting to see how different the tyre would feel under hard acceleration on the sand. The tyre was smooth and consistent with both.

I enjoyed the technical tracks with ruts, sand and with quick turns. I was riding large adventure bikes much the same way as I would a 450 enduro. I was not as aggressive as I would be on braking but certainly through the ruts and deep sand I was happy to have the throttle to the stopper. The forks were bottoming out through the ruts but the tyres felt good.

It would be good to run a comparison test between the Anakee Adventure and the Anakee Wild off road. I suspect there would be far more grip with the Anakee Wild but you would not have the sports touring comfort and grip on the road. The Adventure offers more versatility of course. 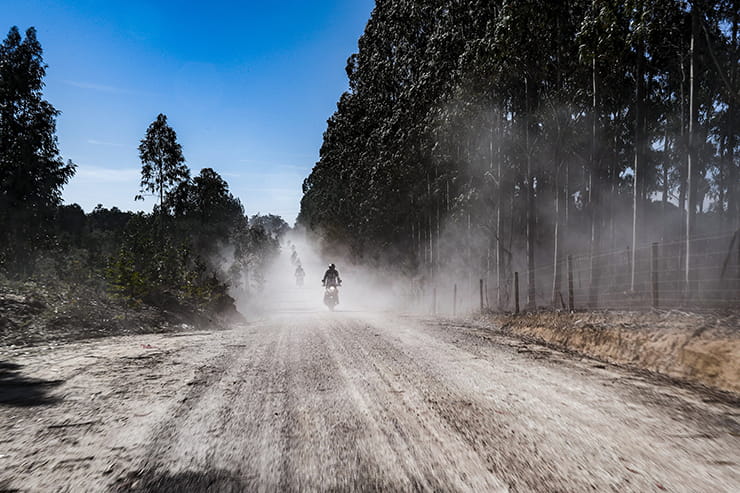 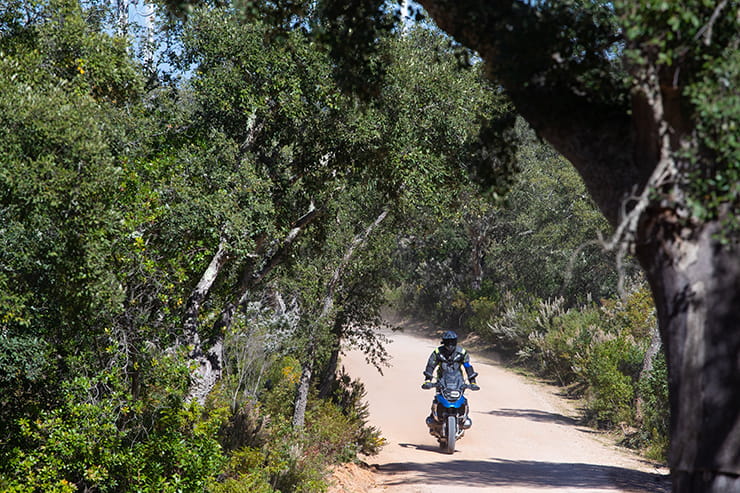 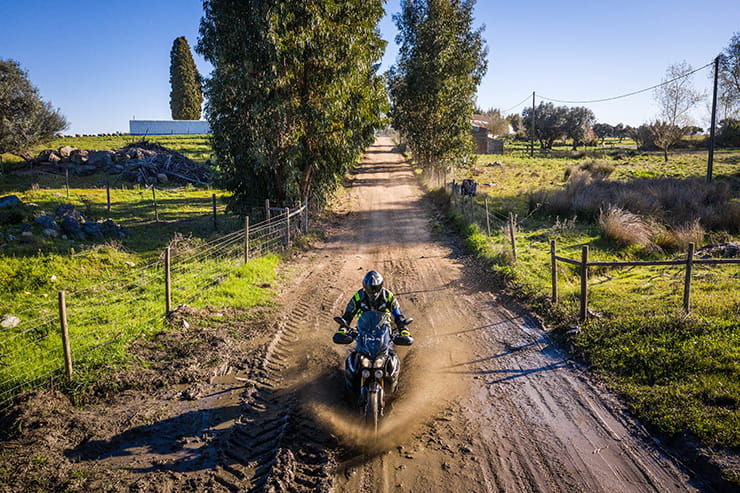 We did not test in wet weather, we did seek out large deep puddles whilst riding off-road and we spent some time blasting through the puddles. We were muddy and wet. The tyres threw off the mud and had clean tread by the time we went back on the road.

There are adventure road-biased tyres on the market with slightly higher off-road capability. The Anakee Adventure tyres are very confidence inspiring on the road. And they allow you to take your bike off-road. Often sports touring tyres are described as fast road with occasional off-road, this is the equivalent. They are fast road with occasional off-road capability. In the real world you will always need to ride longer distances on-road to get off the beaten track.

If you are crossing the alps or desert with changeable weather and surface conditions, you will not get caught out using this tyre. 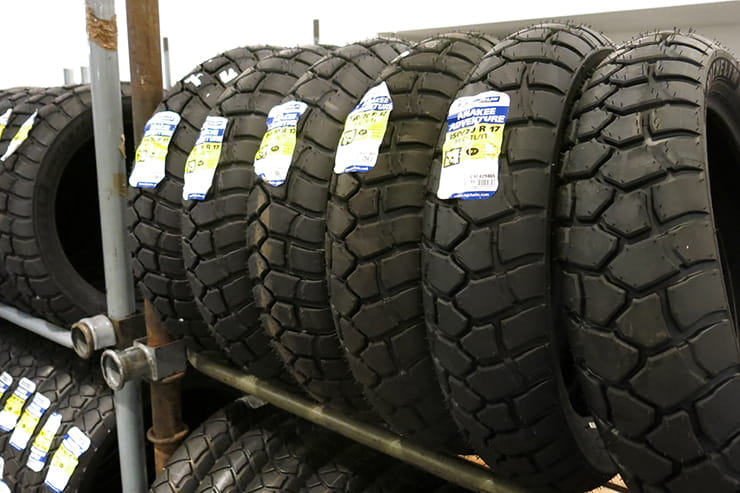 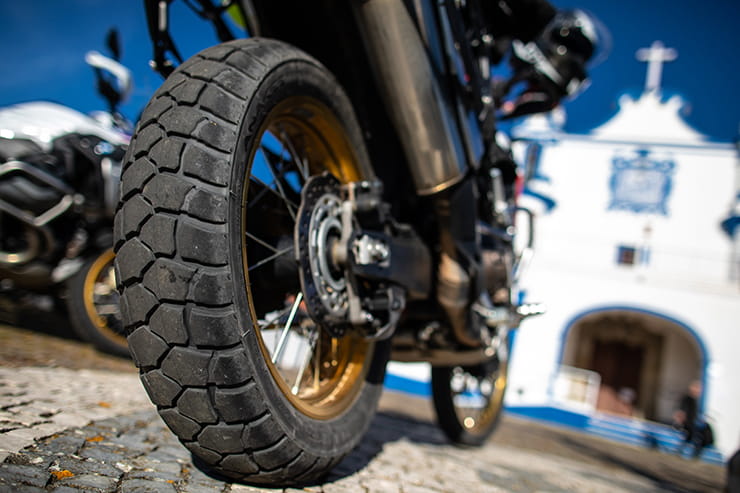 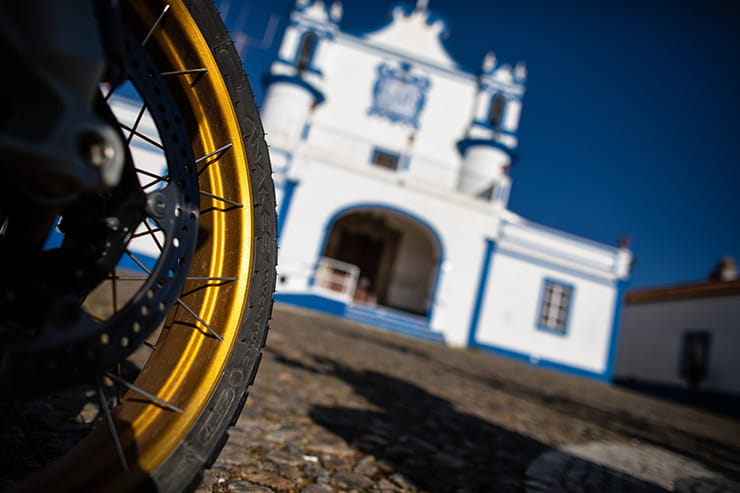 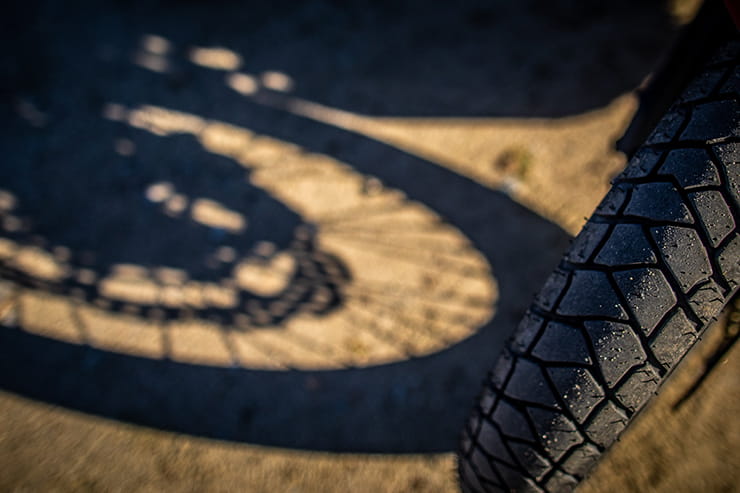