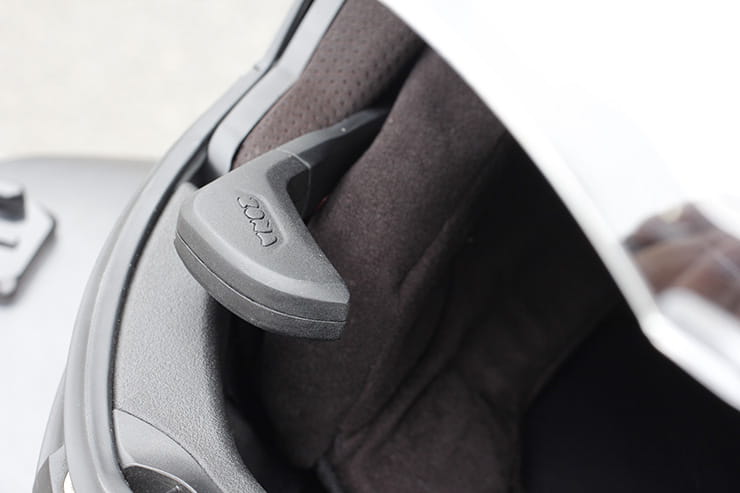 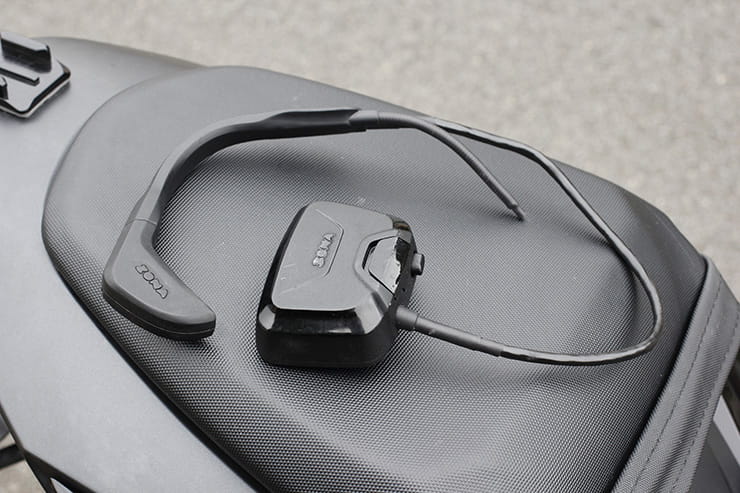 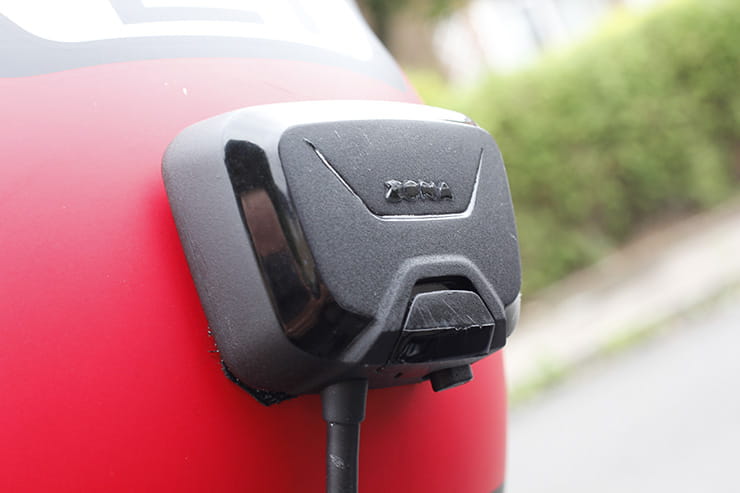 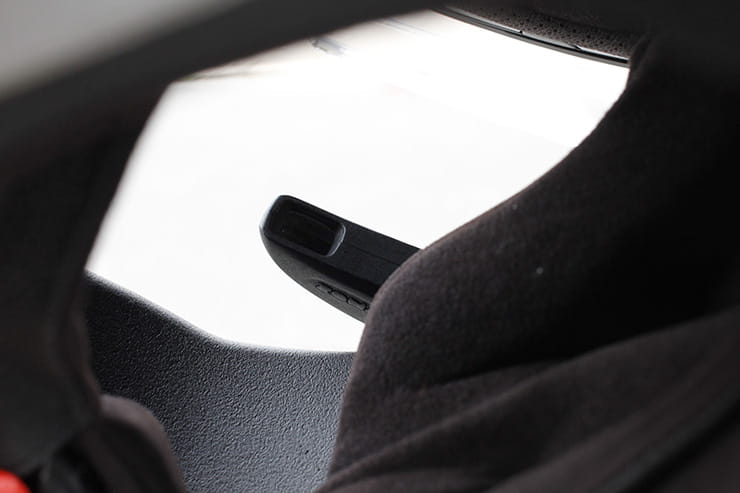 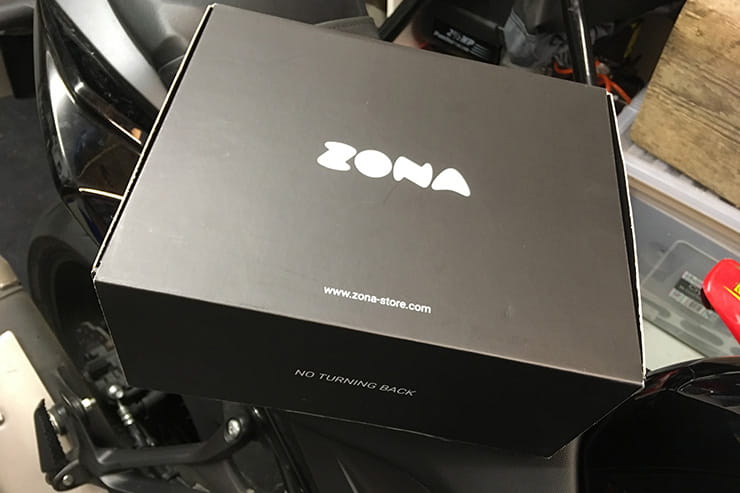 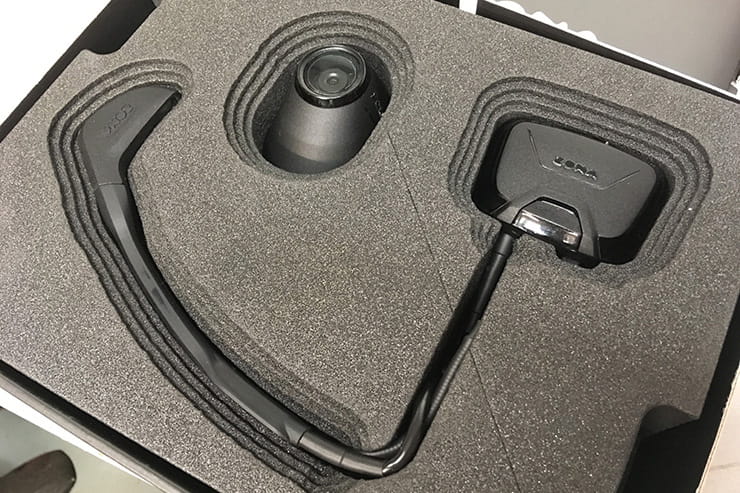 Zona consists of a compact camera mounted to the rear of your bike, and a wireless receiver on your helmet, with a small, high-quality miniature display just in front of your eye. I’ve been using this prototype version for several weeks and around 600 miles, to get a feel for whether it represents the end of motorcycle mirrors…

The brain-child of John Hale, his background of electronic engineering in the defence and oil industries helped him come up with a solution to poor rear visibility: “I had an Aprilia RSV Mille with crap mirrors,” he says. “I was missing the people behind me who were trying to cut me up, and spending too long looking for them.”

The idea started as something that would be just for his own bike, but as the project progressed, he bought in a physicist and a specialist in optics. The idea of a dash-mounted screen was soon discarded, as was having the camera on the helmet – it was found that the bike created a much more stable and easy to view platform for the camera; “There was a lot of psychology to it – how your brain works when it’s active – and mounting the camera on the helmet made for something much too disorientating.”

As I write this, Zona is taking pre-orders for finished product that’s expected to ship around July/August (delayed from June). The version I’m using is dimensionally the same, with identical optics, but missing some of the features. I’m told that, when the production versions are finished, the firmware of mine will be updatable.

In the box you’ll find a camera with wiring loom, receiver and screen for your helmet, micro-USB charging kit for the display, a number-plate bracket and a USB flash drive. The camera simply connects directly to your bike’s battery (so no worries about CANbus), drawing a tested 0.6mA when not in use, and only 0.9mA when powered up. There’s no power switch on the camera – just press the button on the receiver, and when in range, the bike-mounted unit will wake up.

The camera’s loom is currently slightly bulky, but production versions are said to be coming with an easier to route cable, which splits at the end for two connections – one to the battery, and one for USB. 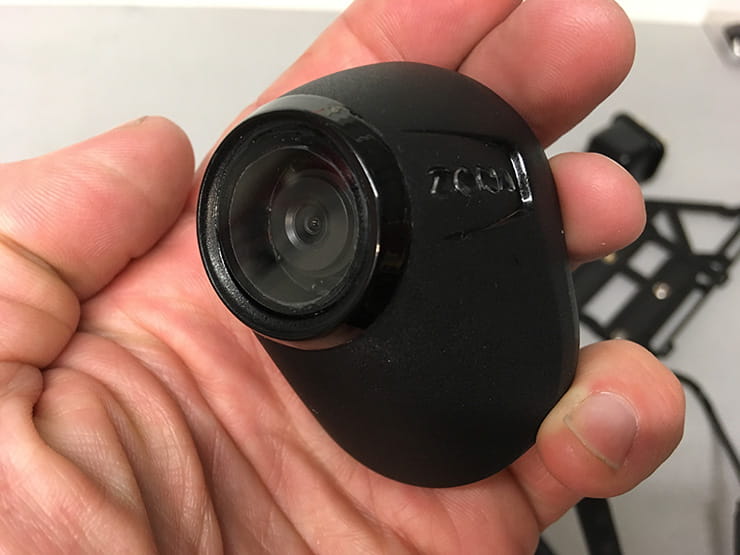 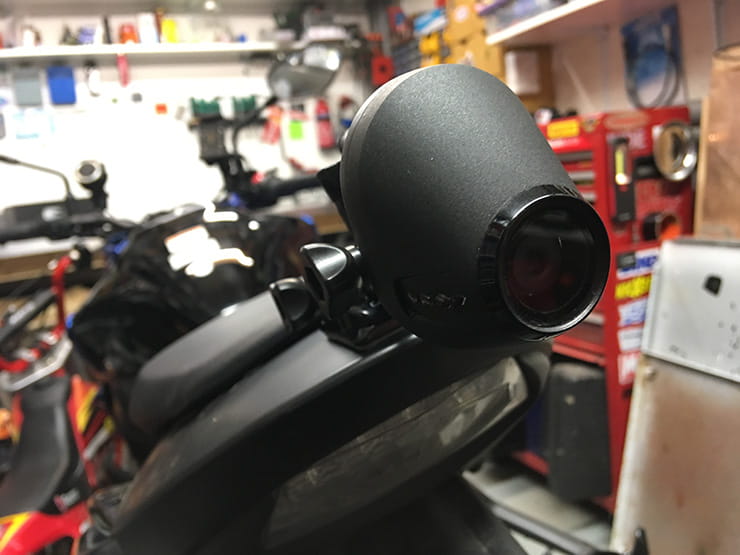 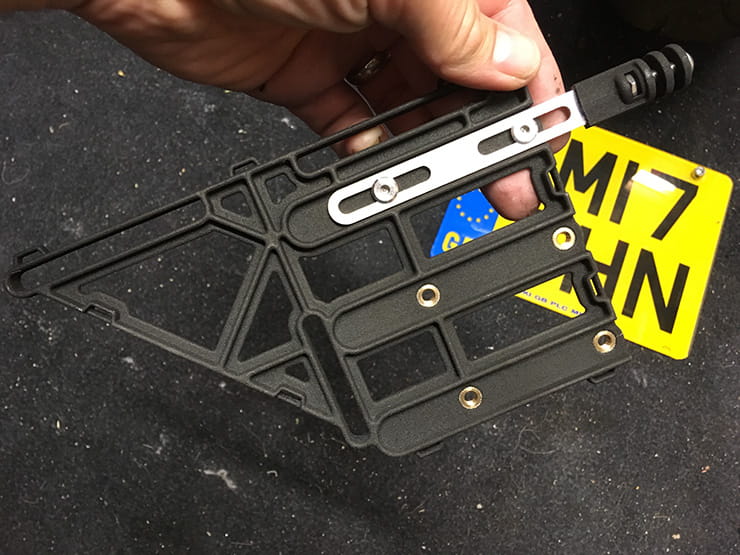 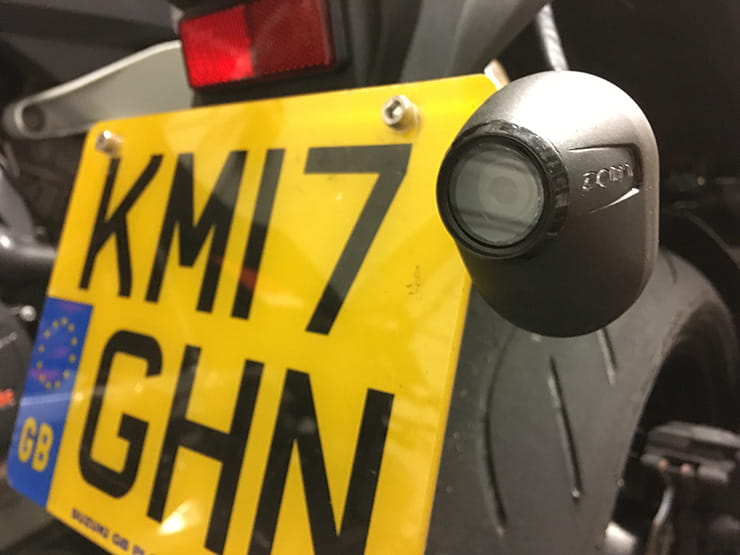 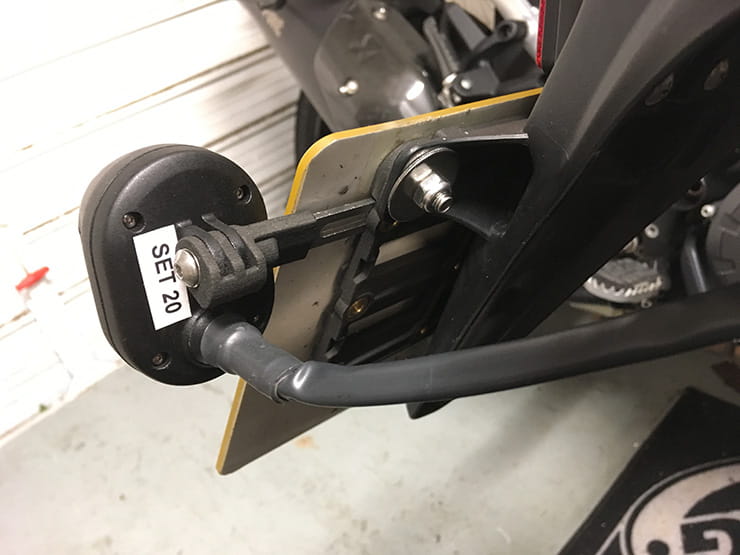 The neatest way of fitting to the Suzuki GSX-S750 I have the device on would be to drill a hole under the tail unit to route the wire, but as it’s a loan bike, I’ve simply tucked it under the pillion seat and zip-tied it to the number-plate carrier.

The bracket that fits behind the plate is universal, and would fit every bike I’ve held it up to. Except the GSX-S, which has unusually wide-spaced fitting screws. Drilling one hole in the bracket fixed this though, and Zona is taking any observations like this into account for the production models (my bracket is a 3D printed prototype). Longer, metal set-screws are supplied to replace the standard plastic number plate fittings, and the camera’s rear bracket is also compatible with GoPro mounts.

The production firmware (not installed on test units) will apparently allow looped recording to the flash drive from the camera, if you want it. When full, Zona says it will start recording again, overwriting the earliest footage, but if a crash is detected by the internal accelerometers, it will continue to record for a period, then stop, to avoid overwriting any footage that could be useful. This USB port will also be used for firmware updates.

The receiver fits to the back of your helmet with a fine hook and loop-style fastener, while the screen tucks under your lid’s cheek pad, and can be twisted to almost any position, staying securely in place without any adhesive. It doesn’t matter which side you fit it to, as the screen recognises its orientation and flips to suit. Equally, the camera can be mounted either way up, but still gives a correct image. I tried it in a Shoei Neotec, Schuberth E1 and an Arai Quantum – none had any problems accommodating the display. I the screen best at an angle under my right eye. Here it didn’t interfere with my view of the road ahead, but only required a quick look down to see what’s going on behind me. The display is focussed as if it’s three metres away from you, so is crisp and sharp.

I wear glasses, and while that means positioning the display slightly higher, in order to keep a lens between it and my eye, I had no trouble seeing a clear image, and it still caused little interference with my view of the road – it's certainly not creating a blind spot.

The camera and receiver use a ‘disabled WiFi link’, so there’s no way other units could talk to each other. If you wanted to buy a second camera for another bike, Zona would pair it before shipping using its database. 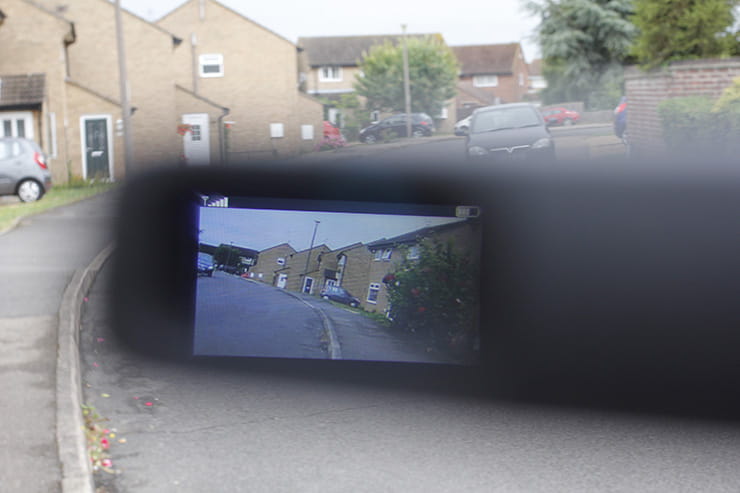 This shot shows the screen - in use it sits below the right eye, so doesn't interfere with forward vision

Knowing what’s behind you is almost as important as knowing what’s in front of you. Unless you’re absolutely confident that there’s nothing at all faster than you on the road, you really should be aware of your entire surroundings. If you are the fastest thing on the road, then you’ll be lucky if you lose your licence before having an horrific crash at a junction.

On my daily commute – with the camera fitted to a GoPro mount on the tail, just behind the pillion seat – within about 30 miles I found that I wasn’t using the mirrors at all. By being constantly aware of my surroundings with a quick glance at the screen, I would just need a quick life-saver to double-check there was nothing in my blind-spot, before any lane changes or overtakes.

Objects in the screen are smaller than they appear in my Suzuki’s mirrors, but they are very clearly rendered. This system is also good in city centres – when sitting at the lights, you’re very aware of anything going on behind you, so your knowledge of pedestrians, cyclists and any other hazards is certainly heightened.

As the pace increased though, I started to find the Zona slightly less useful – making faster progress on winding back roads, you’re looking further ahead, and your vision effectively ‘tunnels’ (it’s why it’s so important to keep drawing your sightline back), so the process of looking down and into the camera is a little more jarring than it is at typical commuting speeds.

The camera performs best in overcast weather that gives a relatively flat light. On very sunny days, the harsh shadows show the limitations of a camera and screen; unlike mirrors, which still allow your eye to discern detail, the digital processing compresses the light levels to a point that can make vehicles less easy to see. A good example was when a bike was following me – in the mirrors, the headlights made it quick and easy to see, but in the display those headlights almost disappeared, so the small, dark bike was far less obvious behind me. This is a concern, as if anything is going to appear rapidly from behind, and possibly be overtaking as you choose to, it’s a bike.

I also found that, when leading a group of six bikes, it was too difficult to make out if all the riders were there – I folded it out of the way and reverted to my mirrors.

I later moved the camera to the number-plate bracket, but here the vibration was so great that it made it very hard to see during at least half of my ride. Production versions promise digital image stabilisation, as the screen only shows a portion of what the camera takes in, meaning there’s potential for this to work very well as the transmitted selection is ‘moved’ to compensate, but I can’t comment until the new firmware is released. 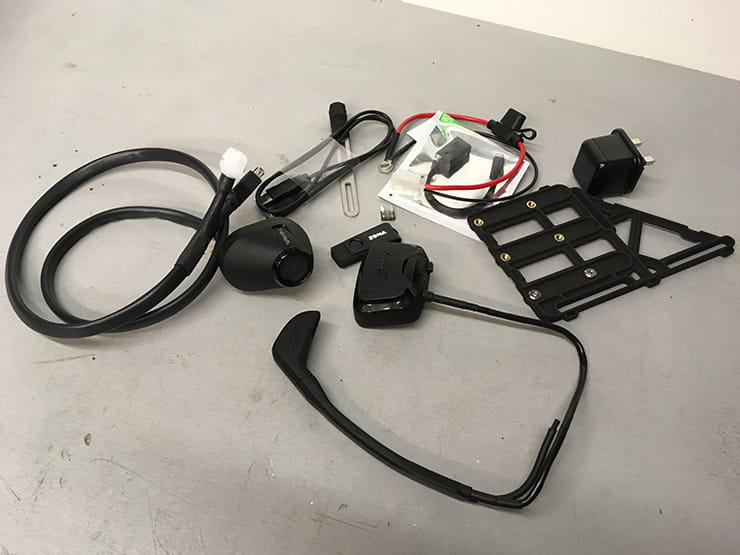 In the dark, the screen doesn’t cause glare from bright lights behind you, as its output is of course limited; think of it like viewing the sun on TV. However, while future firmware updates and camera cover might improve matters, I found that as soon as a car was within around 40 metres behind me, on a straight road its lights would burn out the view. On a motorway, this meant that in the Zona’s display I could only see one ball of light, whereas in the mirror I could quickly and easily discern three cars at varying distances, and my mate on his Honda Fireblade.

There’s a useful battery gauge in the display, and while I haven’t been able to confirm the time precisely, the claim of 8-10 hours of receiver power is conservative – I’ve never found myself short of power, and the Zona easily gives you a very full day of riding, or more than a week of decent commutes. Charging is also simple thanks to a micro-USB port.

All preproduction test models have an early firmware that doesn’t give the full features promised of the final models. Here are the additions that the company says will be on customer units…

Zona isn’t a device for everyone, but it works very well in a lot of circumstances. As a means to be properly aware of your surroundings – especially in a busy city centre – it can prove extremely useful.

It’s certainly a lot better than poor mirrors, and it’s quicker to look at than moving your eyes between the two. It also shows more than you can see with mirrors alone, completely eliminating the blind spot directly behind you. But while it works exceedingly well, I haven’t felt that, for my riding at least, it’s not quite good enough yet in all riding and lighting conditions  – at least in this pre-production version – to replace mirrors.