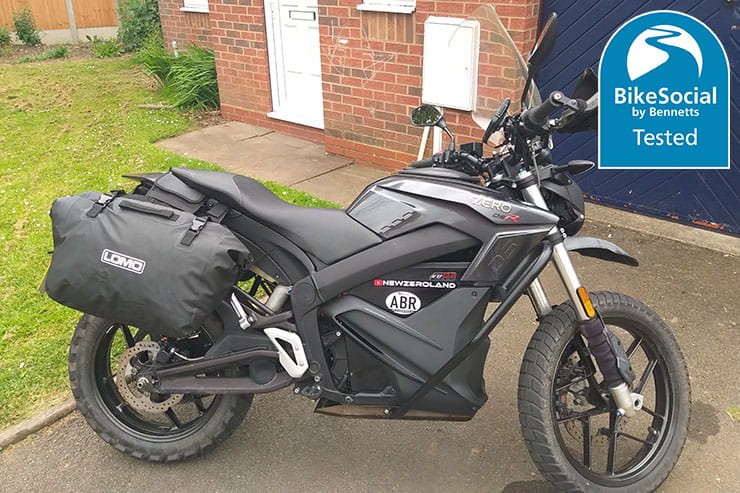 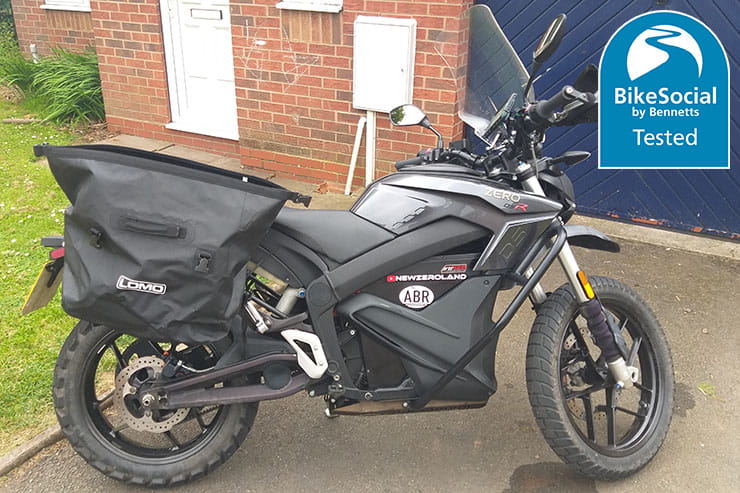 I work 50 miles from home, and come rain or shine I commute on my Zero DSR and Kawasaki Versys 650 workhorses. A real mix of rural, fast single-carriageway, dual carriageway and urban roads, it’s a proper test of any kit I’m riding in. I also enjoy pottering along single-track country roads with grass growing down the middle and some gentle byways.

I’ve had the Lomo dry bag motorcycle panniers for almost a year now, covering in the region of 3,500 miles with them on. I bought them almost on a whim - both my Versys and DSR are fitted with Givi Monokey pannier frames but there are times when I don’t want the bulk or weight of the hard Trekker cases.

I originally looked at the Givi Canyon soft bags but, to be frank, they are extortionately expensive for what they provide. Searches either resulted in kit that was outside my price range, or that was the size of a postage stamp. Then the Lomos popped up by chance in an advert and I liked what I saw, to the point that I took a punt. Lomo is better known for bicycle luggage and roll-top bags for outdoor pursuits, so this is among its first foray into the Motorcycle luggage market.

The Lomo bags are made of heavy-duty PVC with welded seams. They’re a roll-top design with two buckles securing the top and a buckle at each side to tie down the ends of each pannier.

There’s a semi rigid plate in the backs of the bags, so they hold their shape when fitted against the pannier racks and they feel reassuringly rugged. And this has been proved while riding off-road. Scuffs from passing trees and the odd slow-speed drop have failed to breech them, leaving only faint scratches.

I never like having hard panniers attached when tackling the soft stuff – if you have to dab I often find my leg getting trapped, and while hard panniers do a better job of protecting your kit, they also do a better job of breaking your leg if you fall. Soft panniers are the answer to that, and I find that if I need to carry any gear (on road or off) I reach for the Lomo bags over the Givi cases. 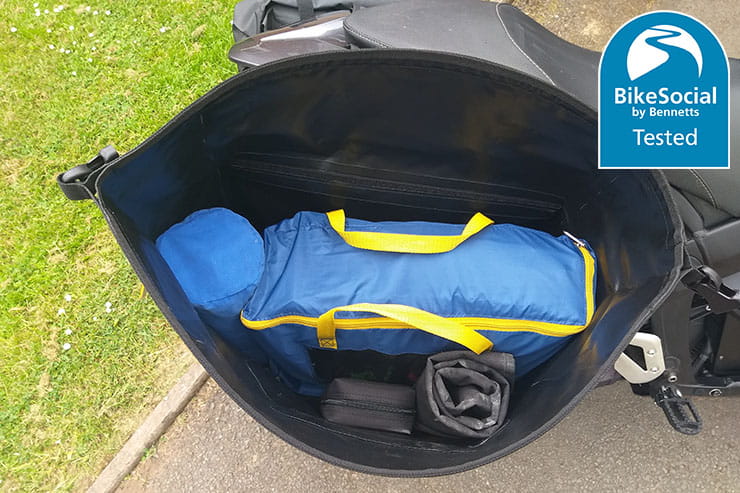 With 30 litres each side, that’s 60 litres in total. Simply put, the Lomos are cavernous; just one side can swallow a full-face helmet with enough room left over for waterproofs, spare gloves, a puncture repair kit and a few other odds and ends. Combined, I reckon I could carry enough kit to sustain me for a serious period of time; I’ve never felt the need for more storage though I could quite easily add my cargo bag across the pillion seat if needed.

Fully packed these panniers are still within the diameter of the handlebars, which makes filtering through traffic much easier, and because of their flexible shape I find I can fit more in them than my 33 litre Givi Trekker cases. Also, when they aren’t full, the roll-top design and PVC construction means you can squish all the air out before sealing to keep them slimmer. Fully loaded, they measure 43cm wide by 30cm high and 25cm deep. 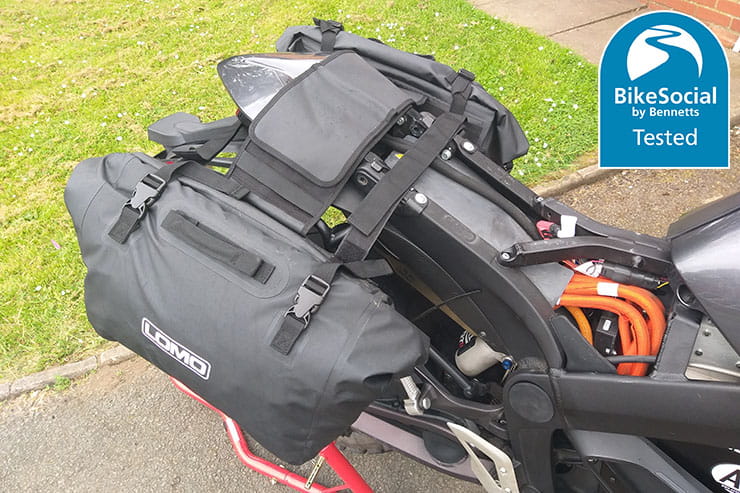 Fitting the Lomo dry bags is really simple thanks to a broad main strap that’s adjusted for length with a seriously strong hook-and-loop fastening. This is supported with two more, thinner, hook and loop straps (one in front and one behind).

I’ve found that the main strap made refitting the seat on both my Kawasaki and Zero a touch difficult when I ran it underneath; on the Versys I had to push down pretty hard to get the seat to click in and on the Zero I had to fiddle a bit to get the seat bolts to line up. But once they’re on, they’re on and they don’t have to go under the seat; Lomo recommends that you weave the strap through grab rails or the rack; whatever you need to do to keep them in place.

On the frames the panniers are held in place with a handful of webbing straps with double-D rings secured through further D-rings located at the corners of the panniers. These work pretty well, but are a bit long and need all the slack tying down. In the end I’ve stashed them in the pannier as back-up straps and used re-sealing zip ties attached to the arms of the pannier frames – much simpler and much quicker!

Carrying them off the bike is a simple affair of detaching the support straps (or zip ties), removing the panniers and undo the connecting straps. Each pannier has a carrying handle for carting them into your tent (or hotel room, depending on what kind of tourer you are).

If you don’t have pannier frames they can be mounted to any bike – you simply shorten the strap and have them sit flush with your bike, attaching them to whatever mounting points (like pillion pegs) you can. Bear in mind though that PVC will melt if touching an exhaust. 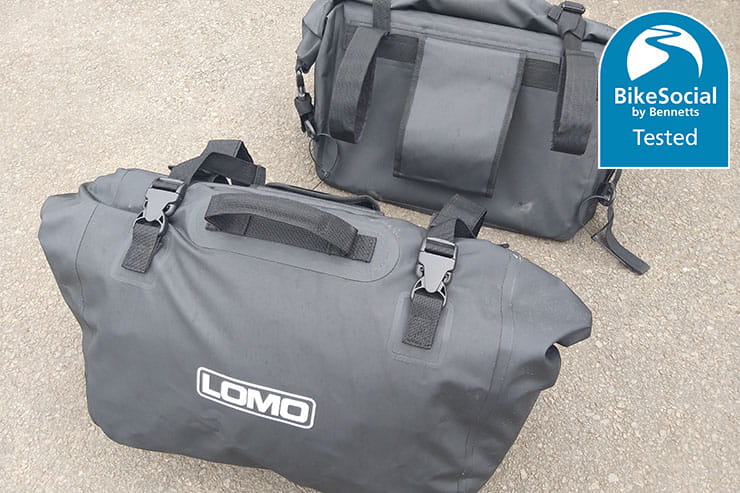 There are no fancy compartments, reflective panels or MOLLE panels, but it shows some thought that when off the bike, the straps can be folded back on themselves and stay in place so they don’t flap about as you carry them with the built-in handles.

The Lomo dry bag throwover panniers are absolutely 100% waterproof. One of the reasons I grab them over my Trekker cases is that they leak and need an inner bag.

Most soft luggage, including the expensive high-end stuff, has sewn seams, so no matter what fancy-named textiles and pricey linings you fit, a sewn seam will leak eventually.

The Lomo panniers have welded seams, and have never let me down, even in some absolutely horrendous weather. Not once has a single drop of water got into them.

That on its own is pretty good, but I wash them with a Kärcher pressure washer, getting up close to blast the grime off them, and not even that can illicit any kind of leak. Top marks for waterproofing. 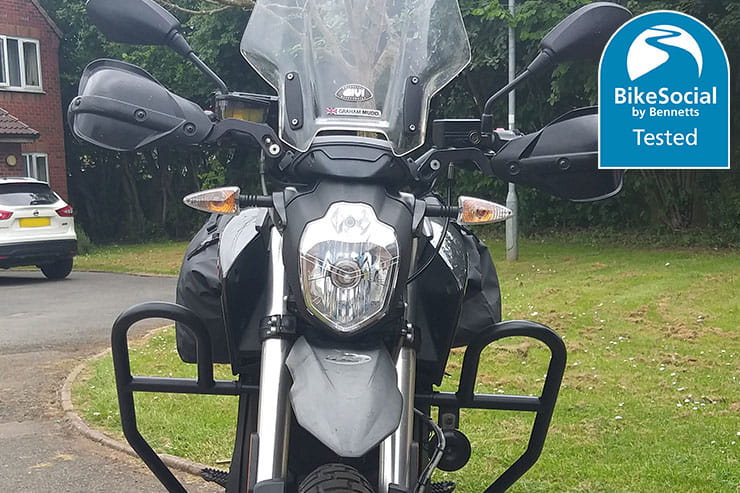 The bags don’t stick out beyond the handlebars, so no problems filtering

Frankly, there is no security. To be fair, most soft bags are lacking here, and what’s the point of locking a soft pannier when you can get into it or steal it by slashing it with a knife?

There is no clean way of detaching them from the bike if you run the straps under the seat (unless you happen to have a T40 socket in the case of the Zero), and I suppose being so drab and unassuming, if you’re parked alongside another ADV rider with a Touratech catalogue thrown their bike, crooks will ignore your humble bags and rob your mate.

Rather than look just at panniers, here are three other ways you can carry your kit…

These are just three of many alternatives – you can find all the luggage we’ve tested here. 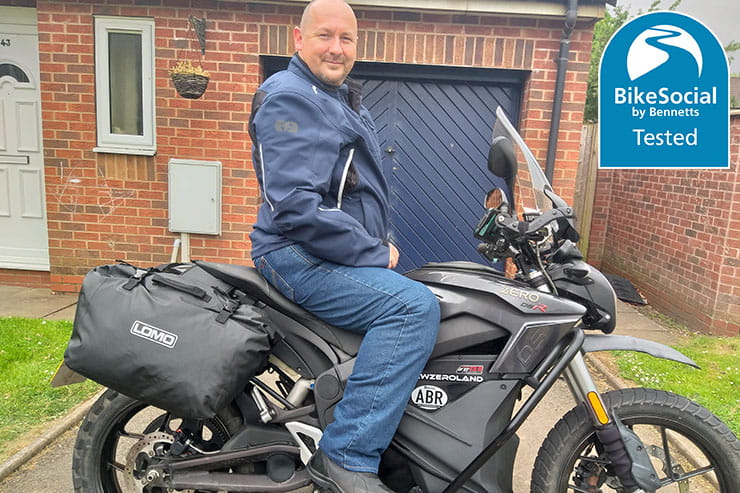 Investing in the Lomo panniers was one of those was rare cases of taking a risk and it paying off.

For a first stab at motorcycle luggage, the brand has hit the nail on the head; I can honestly say I was not expecting a 50 quid pair of saddlebags to perform so well, if at all! They are simply fantastic value for money and do a great job of doing what you need them to – holding your kit and keep it dry.

Saving £367 over the Givi Canyon panniers (yes, that’s just the bags!) you really can’t go wrong, and can probably buy the rest of your touring/camping gear with that.

An absolute bargain that I can’t recommend highly enough.