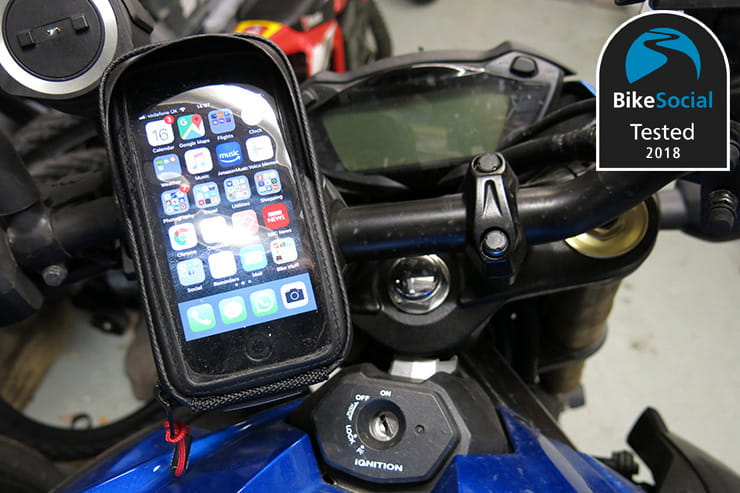 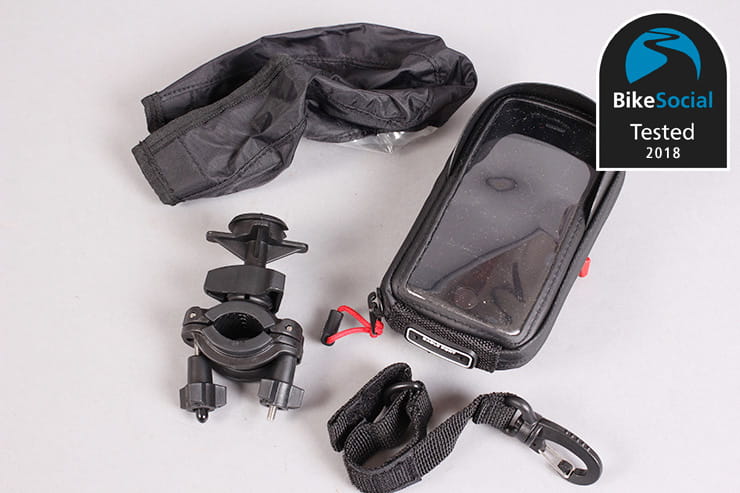 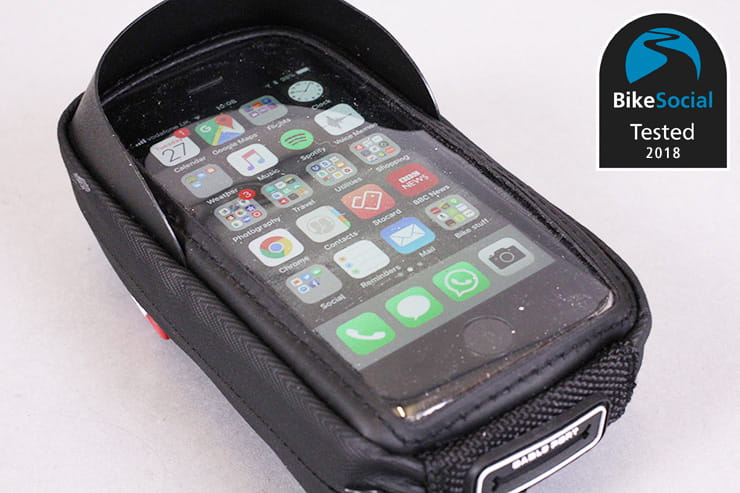 As is expected of Givi kit, the S955B is constructed using quality materials, from the touch-screen compatible front, to the tough, padded rear and water-resistant zip.

Inside is a Velcro-attached cover that protects the back of your device from the mounting bracket’s fixing screws, a 6mm-thick piece of dense foam to keep your phone pressed against the screen, and two Velcro retaining straps to stop it falling out when you open the holder up. 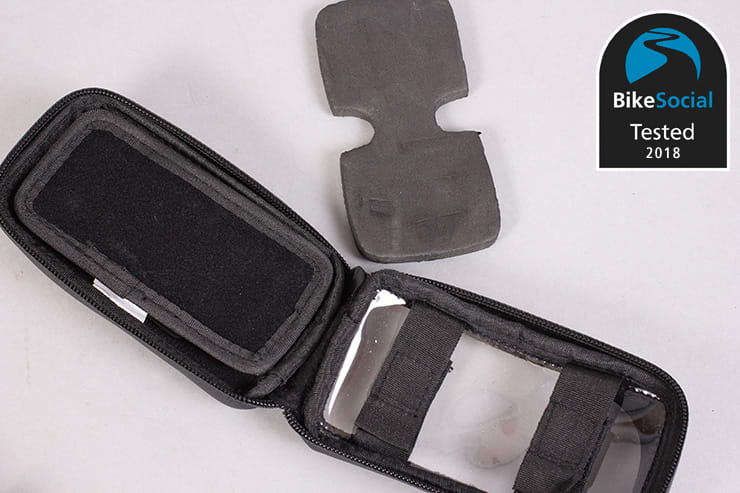 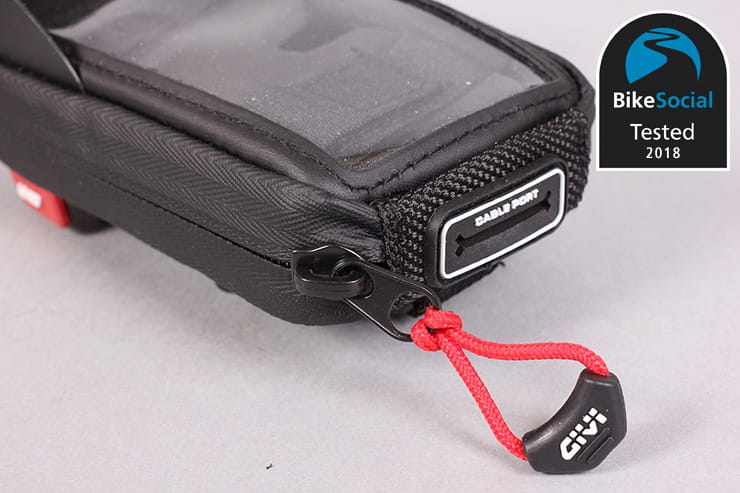 The S955B is designed for with iPhone 4, 5, 5S and SE in mind, having an internal size of 7x13cm. I also tried it with an old iPhone 3G, which being smaller worked fine.

The iPhone SE fits very snugly into the holder, so it won’t move around, but as I have a slim cover on mine, the folds of material inside the case just fowl it slightly, requiring a little more jiggling to get it in. Given a few uses, the material gives and the phone just fits, with the main zip still having no trouble closing.

The straps wrap around the phone well, and without the foam packing in, the holder zips shut easily. However, the phone drops away from the screen slightly – you can still operate it, but inserting the foam keeps your device more firmly pressed forward.

A slot in the bottom of the holder will allow you to pass a charging lead through, but on my phone at least, the position of it relative to the iPhone’s charging port means that pressure is put on the connection, pulling the phone down and away from the cover.

Some people use earphones to listen to music on their bike (I prefer Bluetooth to an intercom), so Givi seems to have missed a trick by not allowing space for the headphone lead to be fitted.

When you take the phone off the bike, you could leave it in the holder, but keep in mind that you can’t access the volume or power buttons, and it obviously adds significant bulk. The best bet is of course to remove your phone, though a slightly simpler system than the Velcro straps – like elastic – might have made this quicker. 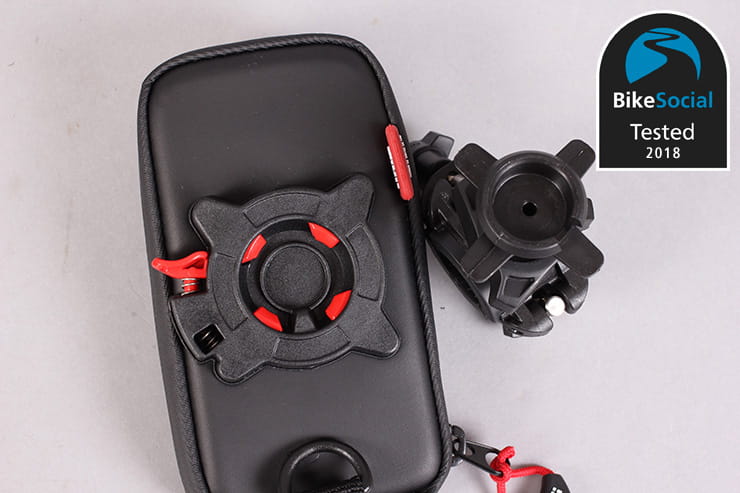 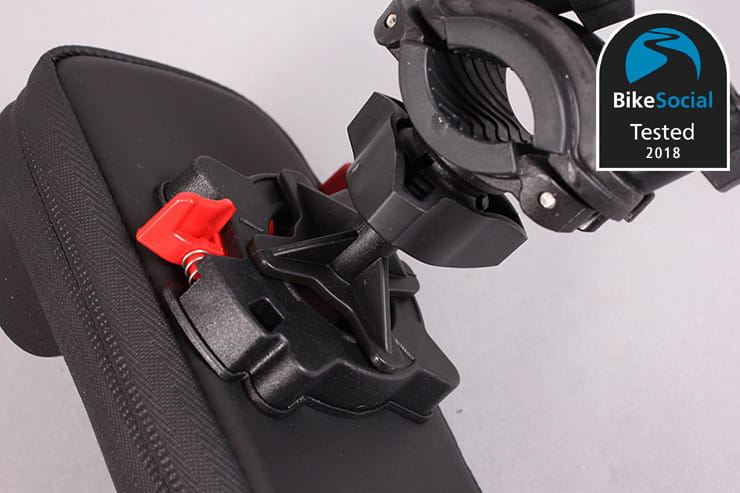 The holder clips quickly and easily onto a ball-and socket mounting bracket, which can be tightened to suit, but can be set to be secure and still allow you to move the device around when riding.

The bracket uses a pair of thumb screws to fix to anything from 8mm to 35mm in diameter; I was able to get it around the thickest portion of my GSX-S750’s Renthal Fat Bars, while trying their tapered area also provided a stable base

To fix to the 12mm diameter mirror stalk, I had to wrap the supplied strip of rubber material around it, but then the unit was secure – this could be particularly useful on some scooters.

A lanyard is supplied to tether the holder to your bars – while the quick-release bracket is very unlikely to fail, this could help prevent your device being snatched while you’re sat at traffic lights. 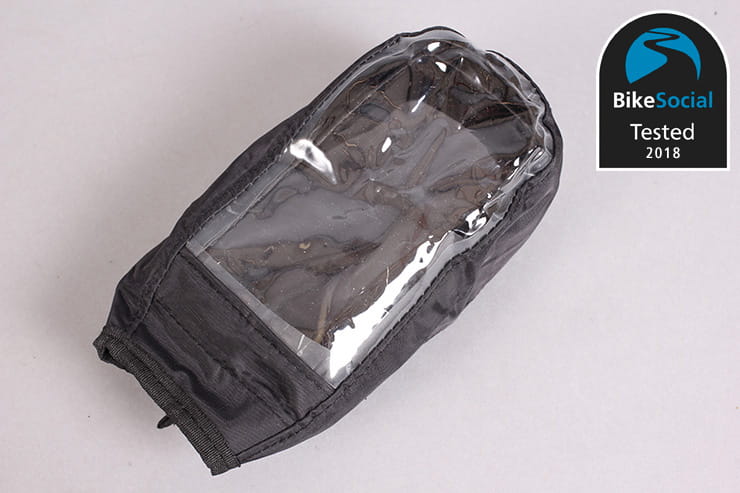 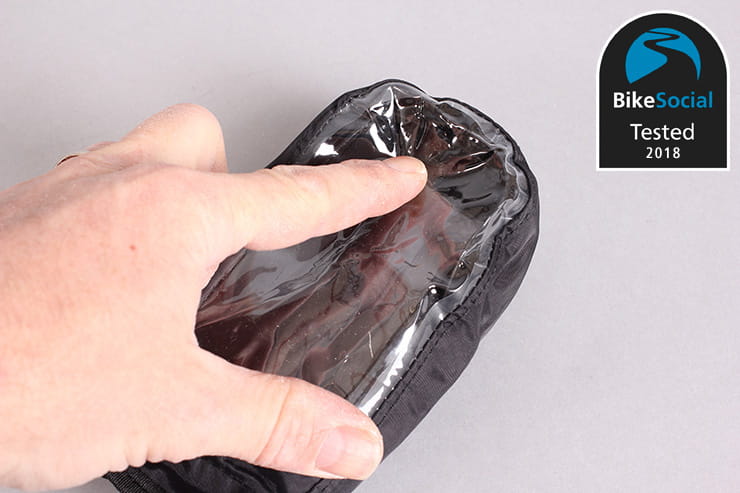 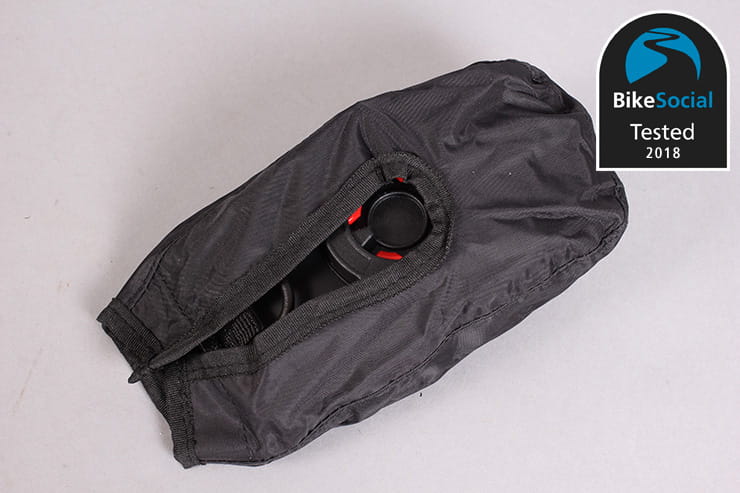 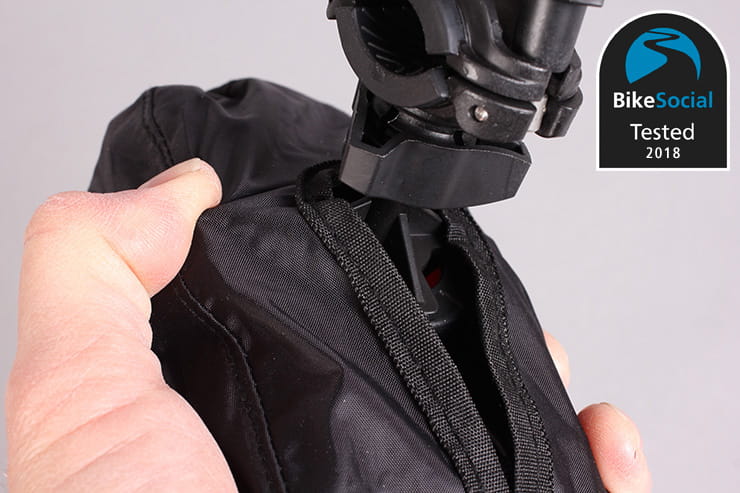 Unfortunately, the zip running around the case, while better than a standard zip, is not waterproof – rain driven directly at it soon finds its way in, so be very careful if you get caught out in the rain and the holder is exposed.

A cover is supplied, which wraps over the holder, though when fitted it can make snapping onto the bracket quite tricky. More frustrating is the fact that the holder’s sun-shield pushes the rain cover away from the screen, making it impossible to press anything in the top third of your phone’s screen. The cover would appear to be an after-thought, as the solution to this would have been to make the sun-shield removable or collapsible.

You must keep in mind that, without the rain cover, the Givi phone holder is not waterproof, though if it’s behind your bike’s screen, you may well find the protection is more than adequate. Also, while the sun shield is a worthwhile addition, if the sun catches the cover in the right way it makes it very difficult to read the screen, as you would expect. To be fair, it’s hard to imagine how Givi could have improved this.

If you want to use your phone on your motorcycle or scooter – for instance as a sat-nav, or to be able to control music that you stream to your Bluetooth intercom, this is a useful option well worth considering. Equally, if you have a car GPS device that you want to use on your bike, one of the other holders in the range will help, and the clever mount makes it easy to pop your device off when you leave the bike.