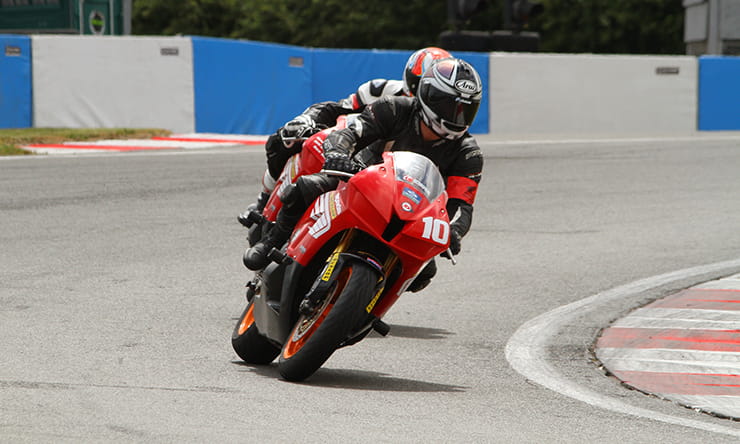 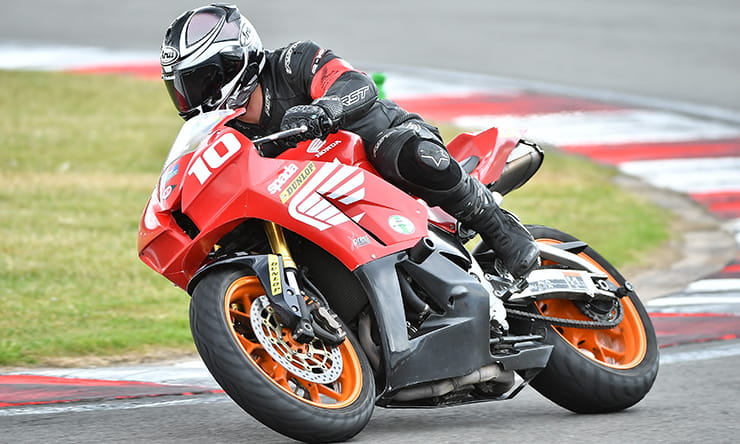 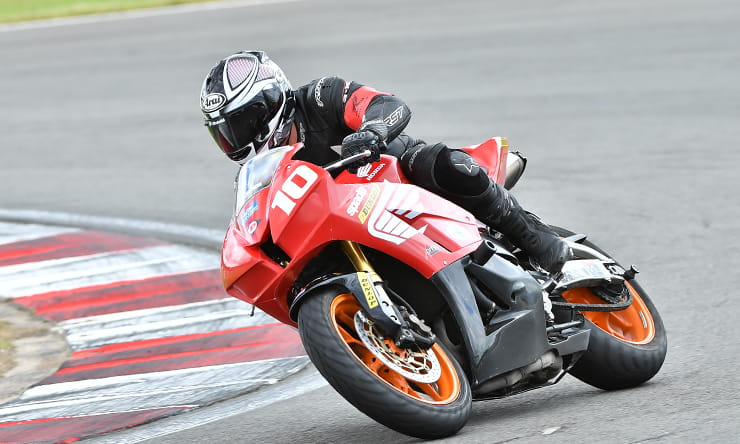 As the member of the BikeSocial office with probably the least amount of track riding experience, I always jump at the chance of getting to a circuit and ‘trying’ to get my knee down. I’d already done a track day at Donington Park earlier this year on a Triumph Street Triple RS but the circuit was wet and I was just pottering around. So when motorcycle industry supplier Feridax gave me the chance to attend, I snapped it up, dusted off my leathers and headed for Donington.

There are a number of courses on offer at the Race School, from pre-CBT courses – to build confidence and knowledge in people with zero biking experience – to full blown, flat out sessions aboard Honda CBR1000RR Fireblades. There are even pillion laps available with the main-man himself, for those braver than me. 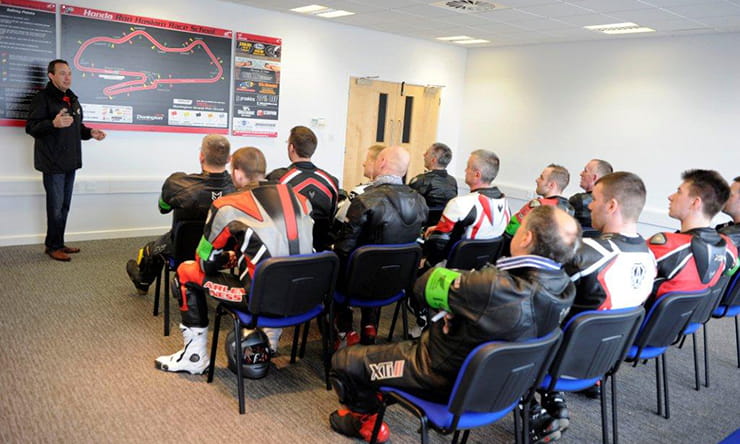 Selecting the PremierPlus Experience meant I had one-to-one tuition with one of the hand-picked instructors. The bike was a scapal-sharp Honda CBR600RR, which isn’t something I’m used to riding but it’s most at home on the twists and turns of the epic GP circuit.

With the morning safety briefing done I’m introduced to my trainer Paul Haskins who, like the Honda I’d be riding, is more at home here than I am. Having taught at the school for years he’s clocked up literally thousands of laps at the track, so much so that he was able to pick out the inch of tarmac on the apex of each corner I’d be aiming for!

My previous track riding has always left me frustrated that my overall corner speed has been too slow, making me play catch-up along the next straight. With this noted there’s a quick talk in one of the pit garages outlining the lines, braking points, turn points and so on.

It’s here it dawns on me that every other lap of Donington I’d done was basically wrong – no wonder folk kept overtaking me on the outside!

The first session is purely an acclimatisation to the track, the bike and the tyres. We circulate for about three laps and, sensing I wanted to push on, Paul turns up the wick! Half a lap later and everything’s going wrong. Wrong gear, wrong line, wrong braking! Paul slows the pace and pulls me in closer to his back wheel and shows me the way.

Pulling into the pits after about 17 minutes we head to a pit garage and talk about how it went. My main problem is that after riding the Ducati Multistrada I’ve had for a few months, wringing a bike’s neck to 11,000rpm just feels wrong. 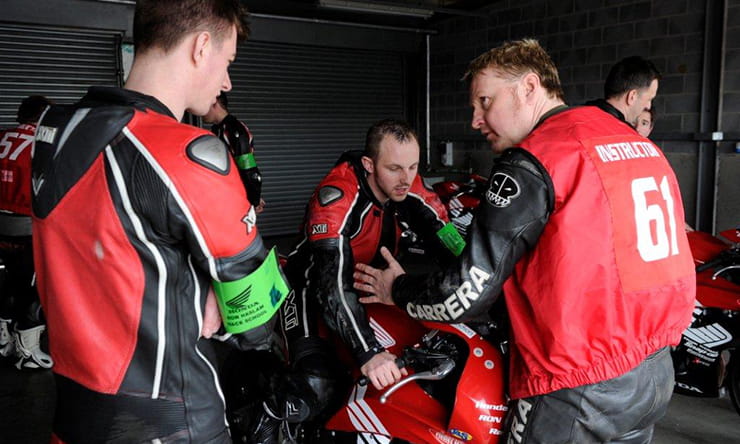 “You have to run it up the revs; nothing will happen below 7000rpm. You also need to hang off the bike more…” With that we head over to one of the static bikes in the pit to go over the correct and proper body position. “Get your bum at least halfway off the seat, lock your thigh against the outside of the tank and line your chin up with the inside edge of the screen” Okay this is great; more confirmation (if needed) that I’d been doing everything wrong all along.

With about five minutes until my next session we head back to the board and talk gears. My biggest problem was not just knowing what gear I had to be in but knowing what gear I was in! The shriek from the CBR’s engine isn’t familiar and most of the time I didn’t know if I was in third, fourth or sixth! “Okay, lets step back this session… let’s just use third gear and only use second for the Melbourne Hairpin. Taking the other variables out of the equation might help you focus on everything else.”

Heading out for session two, we keep to the right to allow some of the Elite group riders (one to one tuition on Fireblade SPs) to flash by on the inside of Redgate. A quick glance behind and Paul taps his pillion seat and we’re off. ‘What no warm up lap?’ I think, but it’s not needed really – the bike had just rolled into the pits prior to me jumping on so everything was now up to temp.

With the bike locked in third gear for much of the lap, the flowing lines of the track begin to unlock and the apexes now flash beneath me with the CBR running out to the kerb. After about four laps we catch the Elite rider on the SP who came past at the start – they could well have had an issue that meant they had to slow but I was classing this as a win!

By the end of the session I’m finding myself having to back off half way down the straight as my tiny wasp-like 600 was apexing and exiting Goddards faster than Paul’s fast but tubby 800cc tourer. I’d also had to start using fourth on the run up from Starkeys to McLeans and on the long back straight. This was starting to come together! 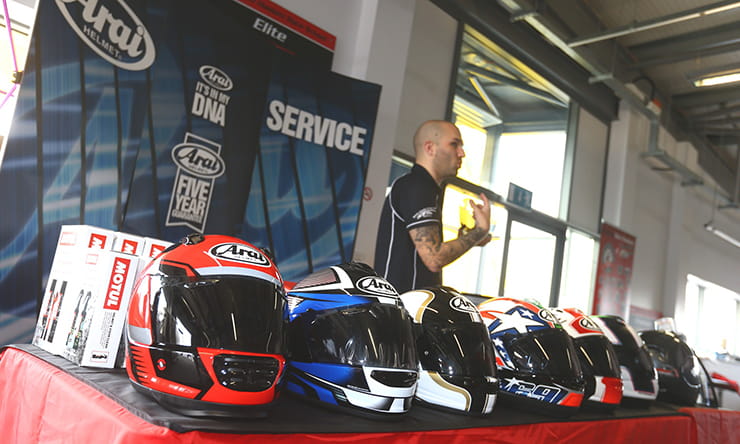 With a final group debrief with one of the lead instructors we head out for the final session. “Now you know the track, the lines and the gears – lets go and have some fun!” The final session was like a ‘eureka’ moment, everything was flowing. I wasn’t worrying or even thinking about the gear changes, and was tipping the bike into turns much more aggressively. We only had one 600 come past us – some washed up old racer called Kane Dalton I think, and anyway I kept up with him for at least three or four… corners.

All in all I’m extremely happy with the progress made. Everything I had asked to improve on and much more had been achieved. If I’m honest, another PremierPlus session would be ideal before taking on the Elite group on a Fireblade, but that’s definitely the goal from here. 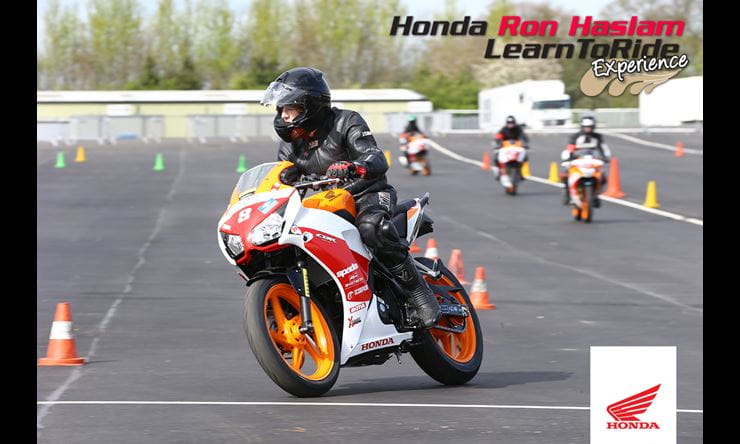 Any rider, with any experience. And best of all, regardless of whether or not you have a motorcycle licence or not, because the environment is classed as a school and all the training takes place on track. A good level of motorcycle control and ability to use the gears is required though. For those in the fast group on track days, the premier course may be where you are already and in that case I’d go for an Elite course, but for those with limited track experience, or those that haven’t received track tuition before, it’s perfect. 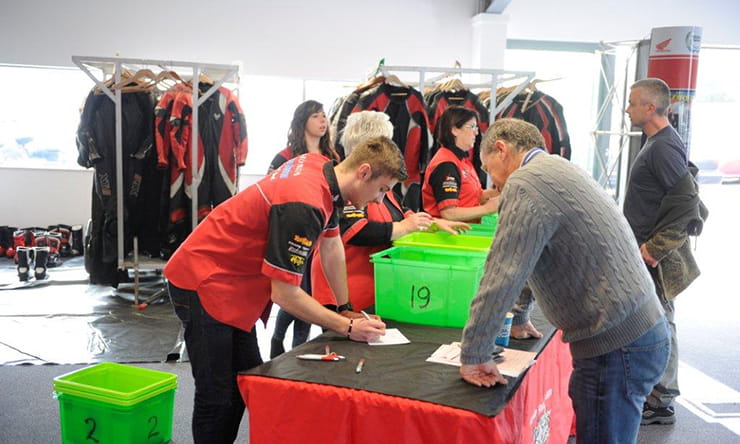 The biggest thing I’ll take away from the day is that on track when things aren’t going well you have to strip it back and simplify your riding. Doing this helps you to focus on the areas that need improving and just work on those points.

I also learned that regardless of how far I could get the little CBR over, it was always well inside its comfort zone. It was my confidence (and testicular fortitude) that needed to improve, and the bike was more than capable of allowing for that.

I guess any time spent on a bike at a facility such as Donington will benefit road riding. I know there aren’t many roads that include an exact replica of Craner Curves, and knee-down road riding isn’t on my bucket list, but learning how to keep a bike stable when braking hard from motorway speeds and where to position my body when exiting a corner are two things I’d much rather hone in a controlled environment. 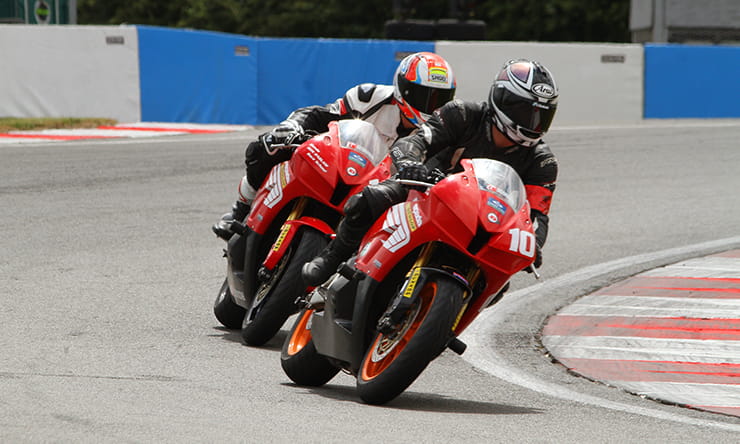 What other riders say…

We spoke to Kelvin Fletcher, former Emmerdale star and now British GT car racer to get his thoughts:

What’s your name and where are you from?

How long have you been riding?

Only got my licence in December 2017 – I’ve only ever ridden Ron Haslam track days prior to that.

Do you ride quite a lot?

I’ve done about five track days in five to seven years. So I’m not a regular rider!

What made you book the course?

From the first day I did – having never ridden a road bike (though I’ve had several motocross bikes) – the instructors were so thorough and gave me so much confidence. It’s a relaxed day with an emphasis on getting you to improve each and every time you go out on track, regardless of your experience or skill.