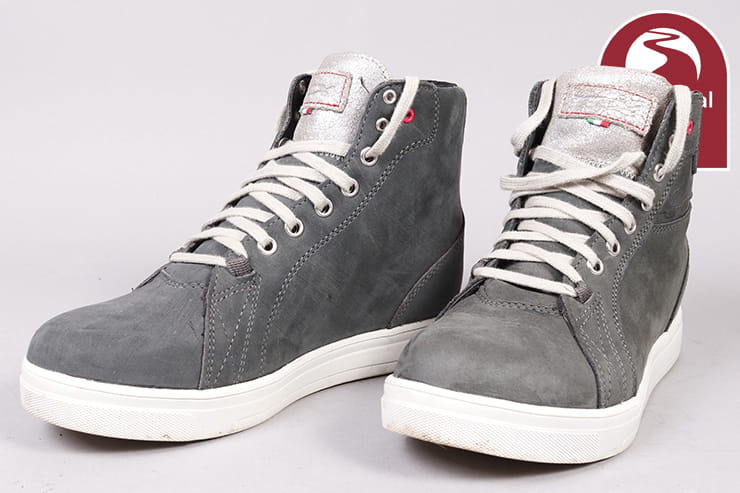 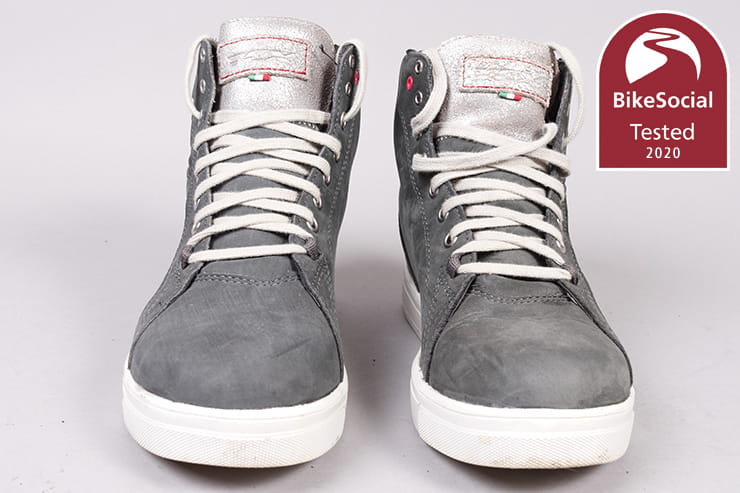 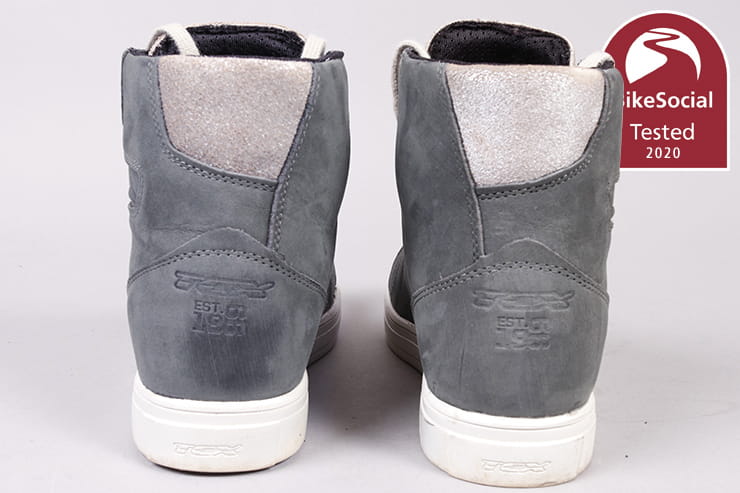 Helen Milbank is a member of the Bennetts BikeSocial Test Team, and has been wearing the TCX Street Ace Lady boots on review here for several months on a variety of bikes, including the Royal Enfield Interceptor 650, Triumph Rocket III and BMW S1000XR… 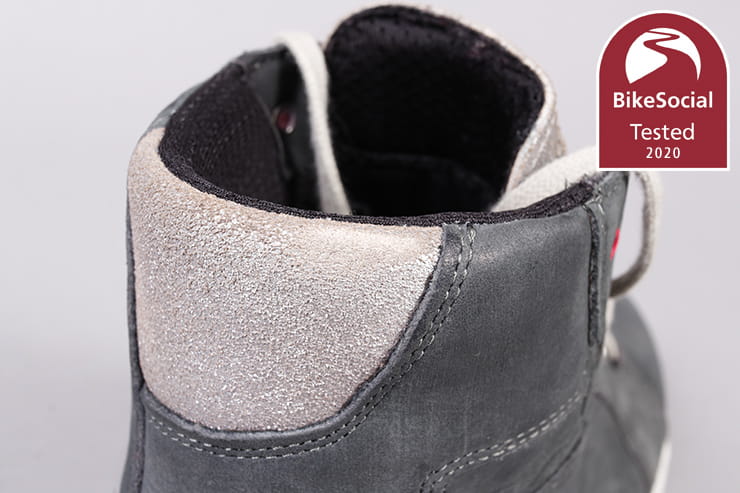 The TCX Street Ace Lady boots – here in the grey version with silver details (you can also get them in black) are made of upper-grain leather with a waxy finish. That means it’s not the top-grain leather (which is potentially the best and toughest you can get), but it’s still taken from the upper-most layers of the cow hide where the grain fibres are most densely packed for strength, while giving a really stylish, soft-look finish.

Of course, this finish does mean that the boots will mark, and will be harder to care for than a pair with a smoother surface, but I’m wearing these as a pillion, so I’m not getting as much muck and grime on them through gear-changes and the like. My husband also has a pair of Street Aces, and while they have picked up a lot of filth, they still look good. The finish on those is slightly smoother than that on this version, and I’d certainly expect to see some polishing on the top of the foot from the gear selector, but people obsessed with keeping their trainers sparkling are unlikely to spend much time on motorcycles. 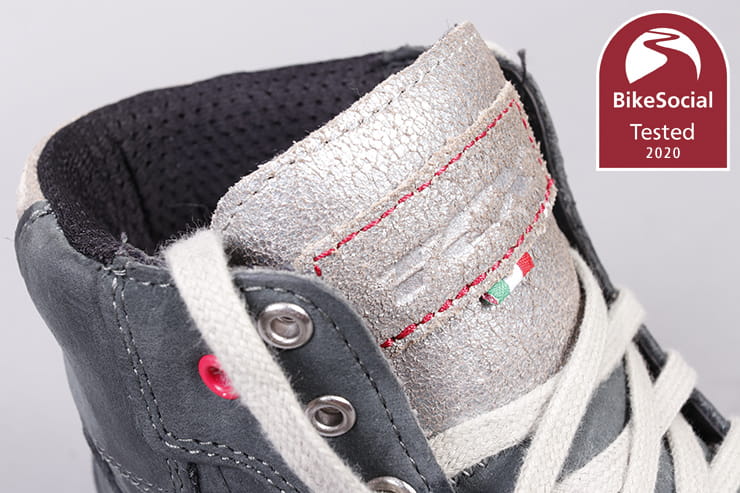 These boots lace up – there’s no lazy zip at the side. Just like a pair of Converse High-Tops, they do take a bit more time to get fully fastened, though they also look great when off the bike with the top two holes missed off. 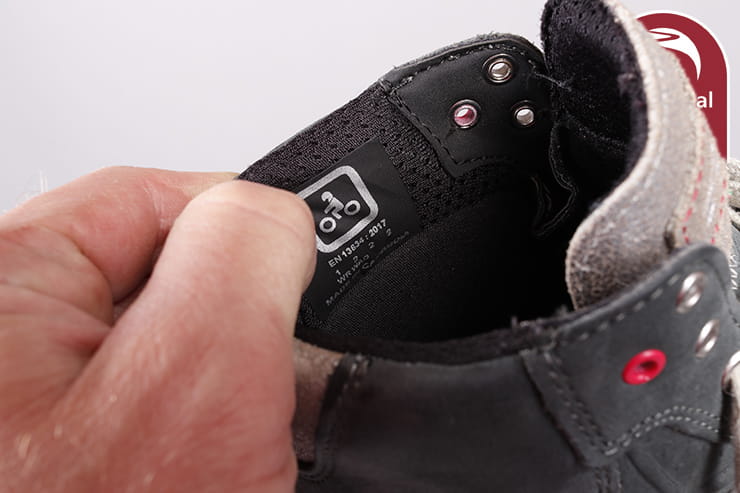 As all motorcycle boots should be, the TCX Street Ace Lady are fully CE-approved to EN 13634:2017 – that means that the soles are crush-resistant. You can check this by laying boots on their side and standing on the edge of the sole; if it folds, the boots aren’t suitable for riding as your foot could be seriously damaged were it to get caught under a dropped bike.

The ankles are protected with slim armour, while the heel also has reinforcement.

Needless to say, these can’t offer the levels of protection you’d get from a pair of full-height motorcycle boots, but everything is a compromise, and I’m very happy with these. 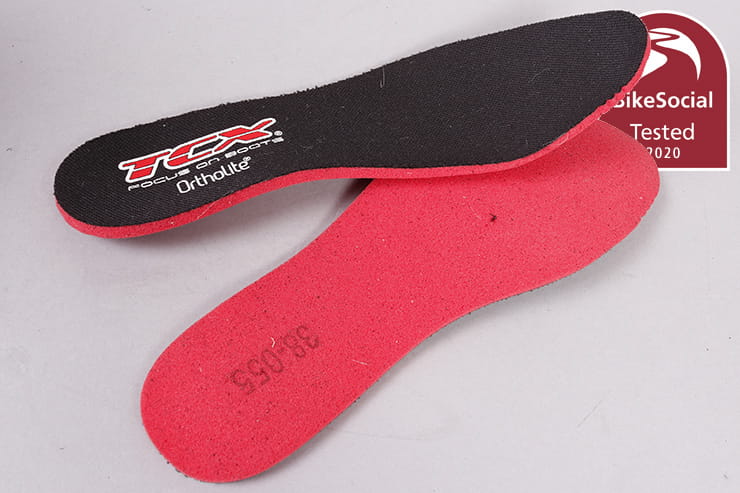 That compromise of safety in not having a boot that comes up the shin and around the calf is what makes these incredibly comfortable both on and off the bike. Clearly they’re not designed to be paired with a set of leathers on a race-bike, but they’re absolutely perfect with my Hood jeans on most of the motorcycles we ride.

The sole is thick enough that I don’t get any discomfort through the pegs, but I still have no problem feeling them through the boots.

It’s off the bike that these really shine – I’ll happily walk for miles in the Street Aces, as my husband has in his. For days or weekends away, wearing these TCX boots means I don’t have to carry a spare pair of shoes for our destination. 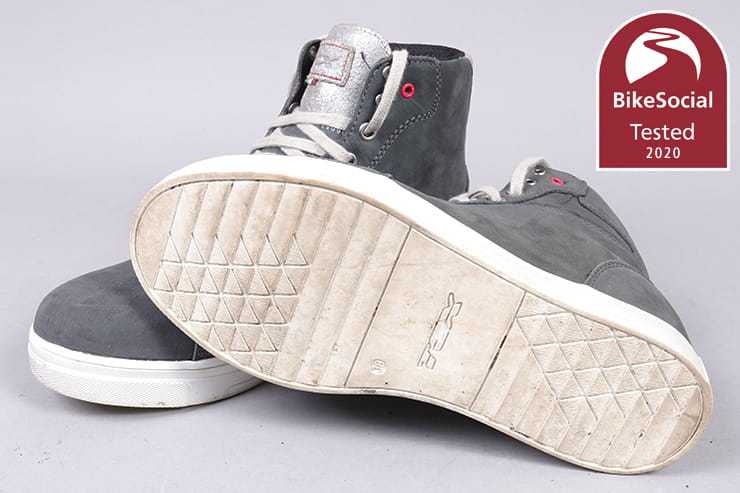 Despite the lack of much tread on the sole, I haven’t found these boots particularly slippery outside in the wet. However, on slick surfaces (like our kitchen floor tiles), they can cause the odd slide, though so does most other footwear on our budget flooring.

That lightweight sole is quite prone to wear though, and as my husband’s Street Aces have shown, they do start to flatten out over a year or so of use, making them more prone to slip on wet, shiny surfaces.

On normal wet road and pavement though, the TCX soles perform fine (even when they are worn). 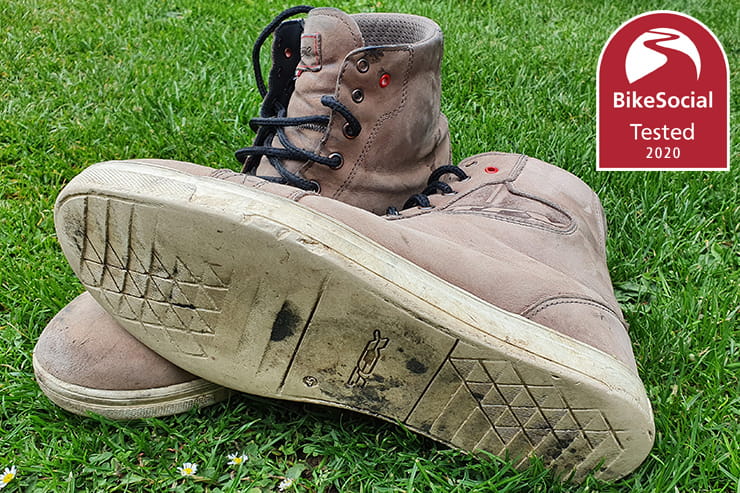 The TCX Street Aces have a waterproof lining that works well, but you have to remember that these aren’t full-length boots, so you’ll be likely to see water running down your shin into them. These aren’t really the kind of boots I’d wear with waterproof kit like textile trousers; they’re much more for those sunny rides out, but at least your feet don’t get soaked if you do get caught in a shower (or step in a puddle).

While not overly hot in use, these boots would be cooler if they didn’t have a waterproof lining. To be honest, given the style, it’s arguable whether it’s worth having one here, though as my husband has been caught out in very heavy rain in his Street Aces and many others, I know that he prefers to have a waterproof lining in all his boots, being willing to have slightly warmer feet to know he’ll not be squelching around after a downpour.

You could commute in these of course – and they’d be great for city riders in the summer – but if you’re planning on riding any real distance in poorer weather, it’s worth going for a more typical bike boot. 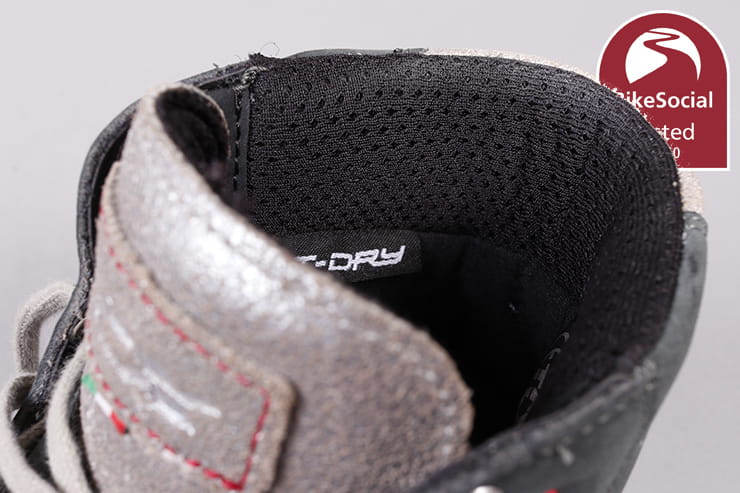 I love these; being the first time I’ve worn anything that isn’t a typical motorcycle boot, I can’t believe how much more comfortable and easy to wear the TCX Street Ace Ladies are both on and off the bike.

While they are waterproof, the Street Aces aren’t really all-weather, all-year bike boots. They’ll also lose their box-fresh look fairly rapidly, and can’t just be given a lick of polish like traditional motorbike footwear. For what I want though – typically good-weather rides with plenty of walking around – they are perfect.