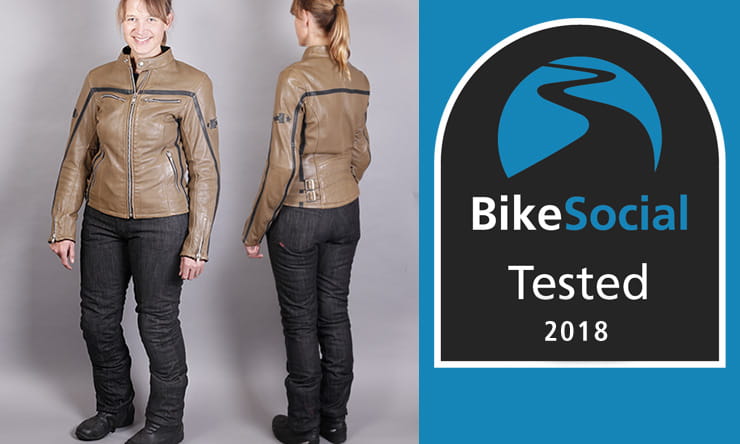 I don’t want to have to spend too much on my bike kit, but I do want to be safe. Most of my time is spent as a pillion, never taking to the track, and only generally going out in the good weather. I need something that’ll protect me in a crash, but that’s as comfortable and easy to wear off the bike as it is on.

Most of our rides have a destination, and we’ll often cover about 100miles before spending the day wandering around.

I’ve had these Hood K7 para-aramid jeans since April, and have worn them on a variety of adventure, sport and street bikes… 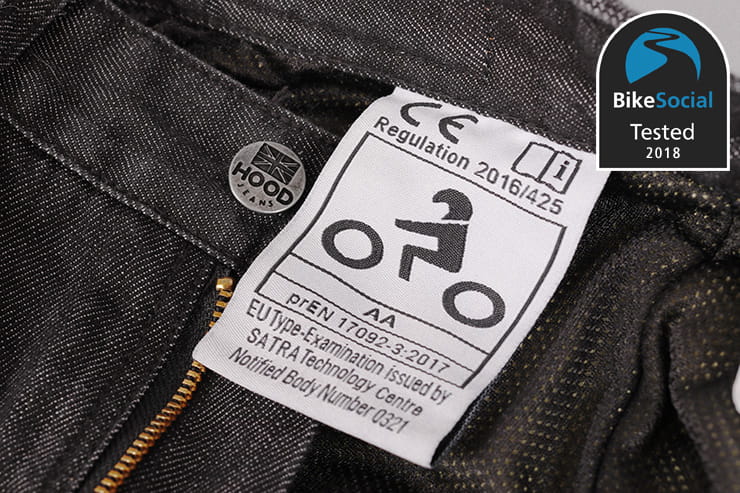 The Hood K7 jeans are fully certified to CE standards, so have a measurable level of protection

Having had other para-aramid and Kevlar jeans in the past, I’ll admit to being reluctant to try these when my husband, who’s worn Hood for several years, suggested them.

While other brands have not had the most flattering cut, these Hoods are great. Of course they are more bulky than standard plain jeans, but it really shows that Chris and Julie Easterford – the Norfolk-based couple behind the Hood brand – used to design jeans for major high street names.

I’ve opted to use the knee and hip armour, which adds to the padding around my hips, but being D3O, it’s not too bulky. I could easily remove the armour, but I do value the additional safety.

Every pair of Hoods is sent out to suit your leg length, so you won’t find yourself with a pair that are just a bit too long or a bit too short. 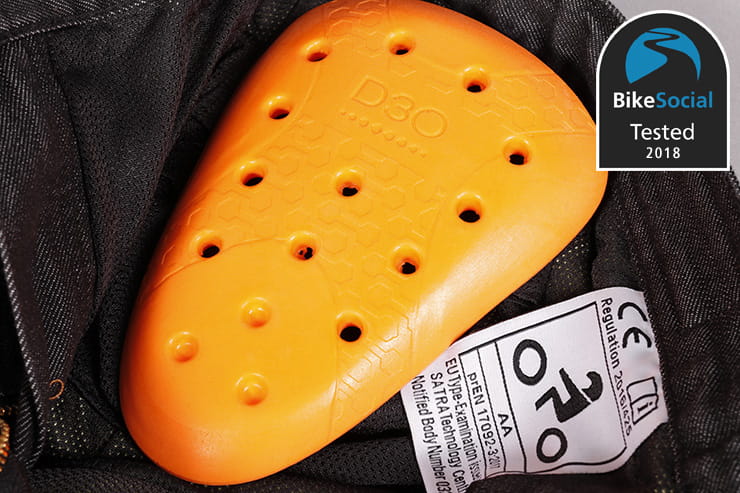 The armour supplied is D3O Level one, and doesn’t add too much bulk

With a CE AA rating (tested to prEN 17092), these bike jeans offer a serious level of protection – to give you an idea of the abrasion resistance, if the para-aramid lining covered the groin and the very bottoms of the legs, these jeans would meet the top AAA classification under the requirements of the new EU PPE regulation 2016/425.

The D3O T5 Evo X armour is certified to EN13595 Level 1 and is very soft and comfortable. You can also upgrade to the Level 2-approved T5 Evo Pro kit, but this does add more bulk. 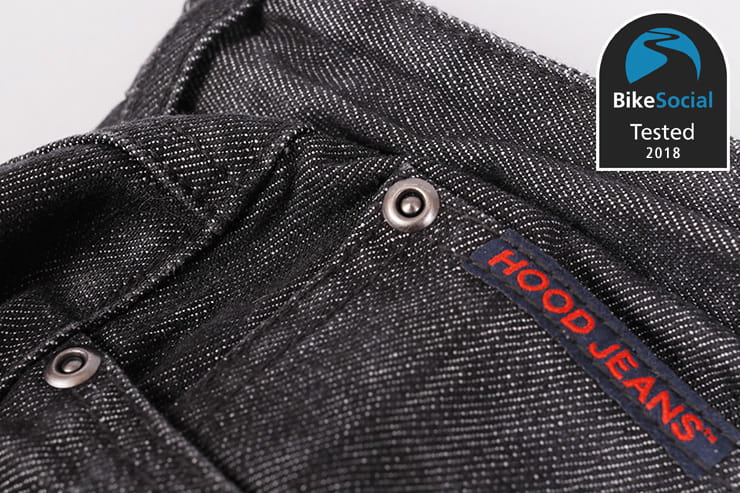 The rivets are flat and smooth, so won’t damage your bike’s paintwork

The stitching is to a very high standard and doubled-up in critical areas for burst resistance, while there are stirrups on the bottoms of the legs to stop them riding up. These are a requirement for the AA rating, but I snipped them off as the legs can’t pull up over my boots anyway.

From April 21 2018, all motorcycle clothing sold in the UK is deemed to be Personal Protective Equipment (PPE). To meet this legislation, it must be tested to a recognised standard. For more information on the law, click here. 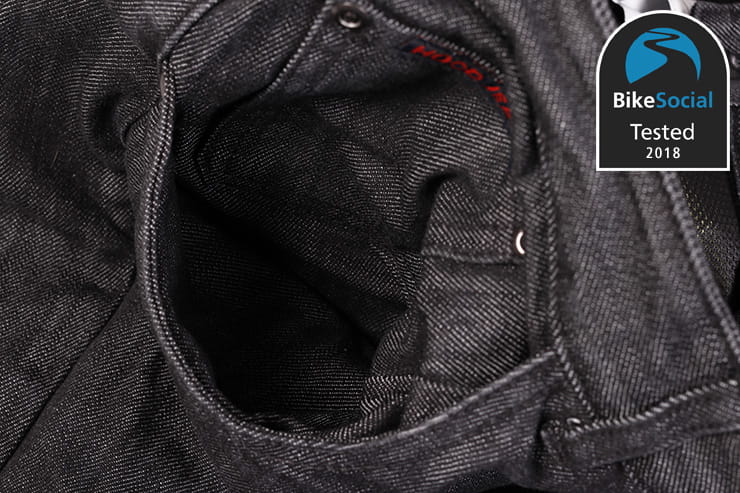 Pockets are lined with denim, so last much longer than cheaper linen

There are two pockets at the front and two at the rear, along with a small coin pocket – it’s the classic western denim design. Unusually, the pockets are lined with denim, rather than lightweight linen, so will last a lot longer and also offer even more protection in these areas. 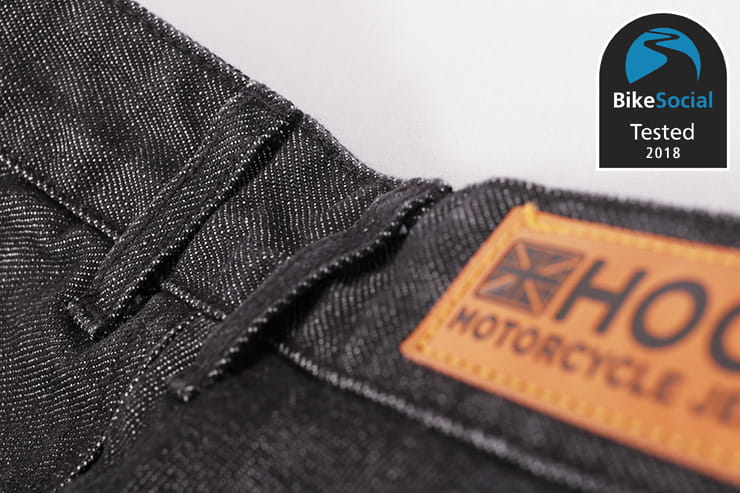 Six belt loops keep the jeans comfortable and in place

The K7s have a YKK zip fly and button waist fastener, along with six well-positioned belt loops, so your jeans won’t ruck up or drop under your belt.

The legs are cut to give just enough space that they can tuck over the tops of my winter boots – you could tuck them in of course, but I much prefer them over the top, especially when walking around. 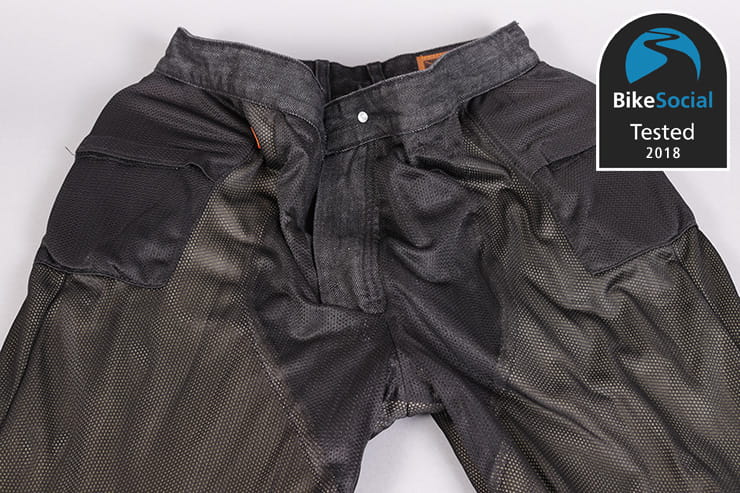 To meet the new CE-standards, these Hoods have a lightweight mesh Airtex lining – this helps to stop the para-aramid protection from producing a sheering force on your skin in a crash. It also makes them more comfortable than others I’ve tried, keeping them a little cooler in the summer, and helps stop them sticking to my legs in the heat. 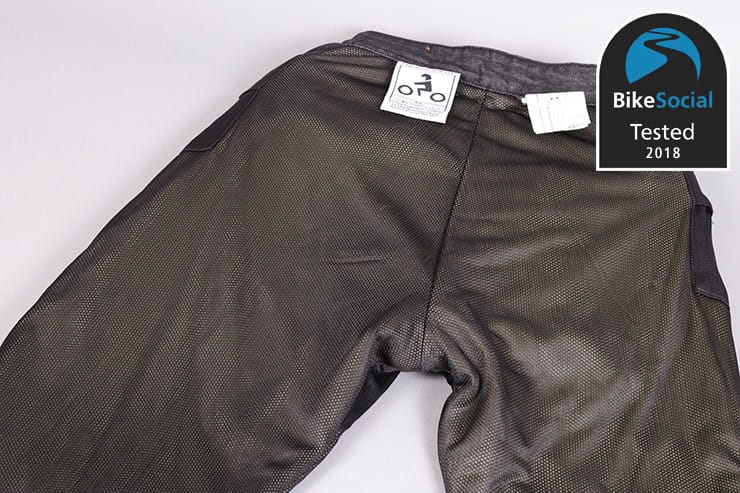 No patchwork of para-aramid here; the Hoods offer a superb level of protection

I’m thoroughly impressed with these motorcycle jeans. They’ve clearly been designed to suit the female shape, rather than just being the same as the men’s version, and because they’re CE approved I know they offer me a good level of protection.

Hood has proven that being safe on the bike needn’t come at the expense of comfort or style; the K7s are brilliant.

After posting this review on the BikeSocial Test Team Facebook page, team member Ian Brown told us that "I was wearing the men's version of these (and the Hood jacket) in March 2017 when I got hit by a car. Both had to be cut off me, but I can confirm that I had no abrasion injuries, and my knees, hips, elbows and shoulders were all untouched.

"I suffered a spinal fracture, which was caused by my bike's fuel tank trying to punch its way through from the front, so this was in no way a fault of the back protector.

"Hood Gear is not only very comfortable to wear both on and off the bike, it also does what it's meant to."