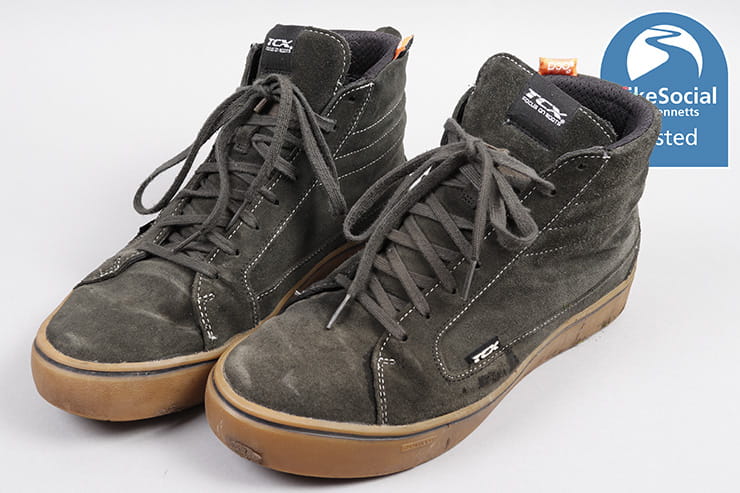 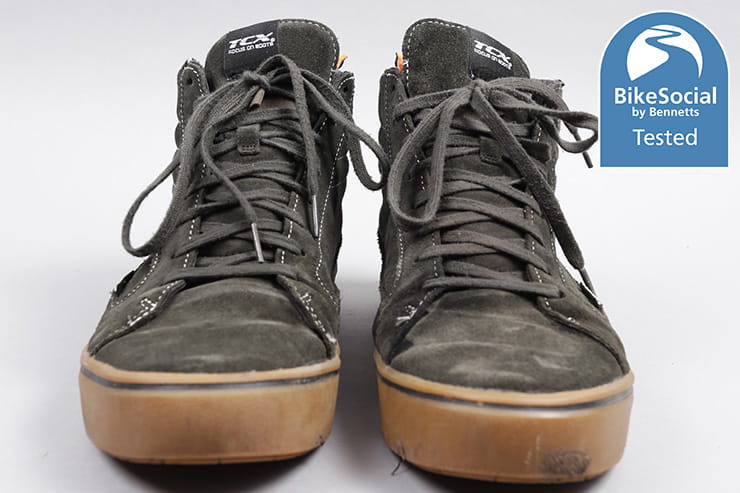 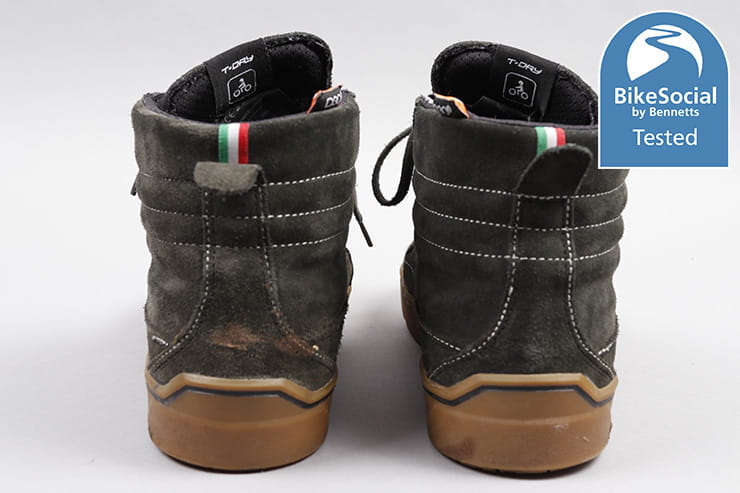 It makes me cringe when I see people riding motorcycles or scooters in trainers. It wouldn’t take much to cause some serious damage to your feet – and especially your ankles – in even a relatively low-speed spill.

While I’m clearly no expert in fashion, many people seem happy to spend £150 or more on a pair of sneakers, but I think TCX has nailed the style of its boots while offering very real protection for the same price (and sometimes less).

I’ve been wearing these TCX Street 3s on a variety of motorcycles, as well as spending all day in them walking around the city, taking the dog out and cycling to try to find out why anybody wouldn’t choose these. Spoiler alert, I wasn’t successful… 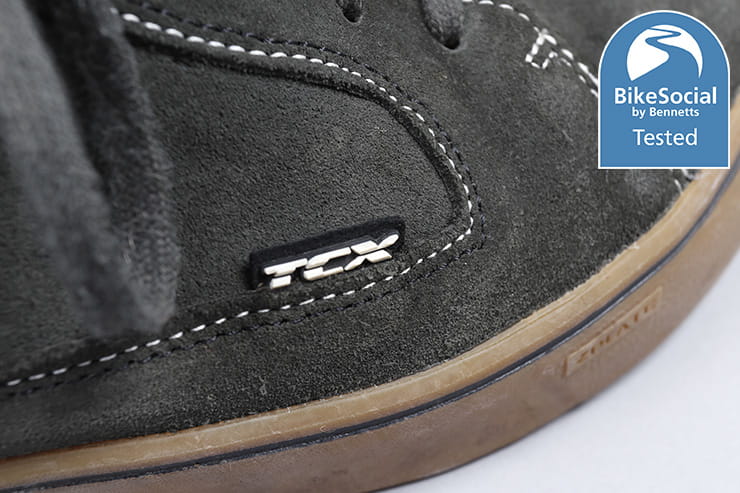 Made of full-grain leather with a nubuck finish, these ‘green/brown’ TCX Street 3s look a lot better than their colour name would suggest. The contrasting stitching gives a ribbed look to the upper, while it’s good to find a tough pull-tab on the rear to help get them on. I’d have liked a loop here, but that’s mainly because I’m too lazy to undo the laces properly.

The finish does start to show marks, particularly if you wear the boots while crouching down in the garage a lot; you’ll see the creases appearing. It’s certainly nothing different to any other boots I’ve used, but of course the nubuck texture means you can’t give them a quick nob-up with some polish.

I did have one small area of stitching pull away near the front, but it’s not caused any structural issues or impaired the waterproofing.

Any boot will show signs of wear on the left when changing up gears (I can’t see these being worn by many riders with race ’boxes or classics that old to be on the right), but the textured finish will flatten off quicker, so do expect marks to appear where it rubs. It’ll depend on the position of the gear lever, though I tend to find it on the bottom of the lace section, where it stitches to the upper.

Of course, these boots are fantastic for scooter riders, in which case – weather permitting – they’ll stay looking good for much longer. 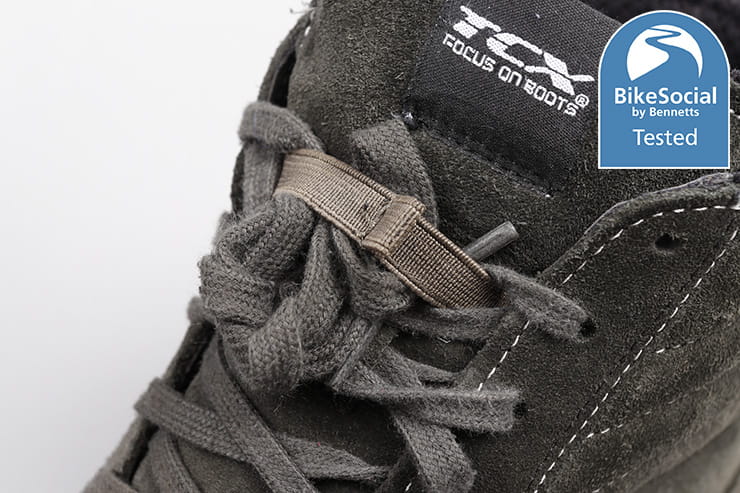 Nothing fancy here; just standard laces. I tend to leave them out of the top pair of holes, making it easier to slip the boots on and off, but that’s for general day-to-day use; they should be fastened properly when on the bike really, to ensure the sides can’t be pulled down in a slide.

A neat touch is the elasticated keeper on the tongue, into which you can tuck your laces; anyone who’s had a lace get caught around the gear lever or peg as they get on or off the bike will appreciate this! 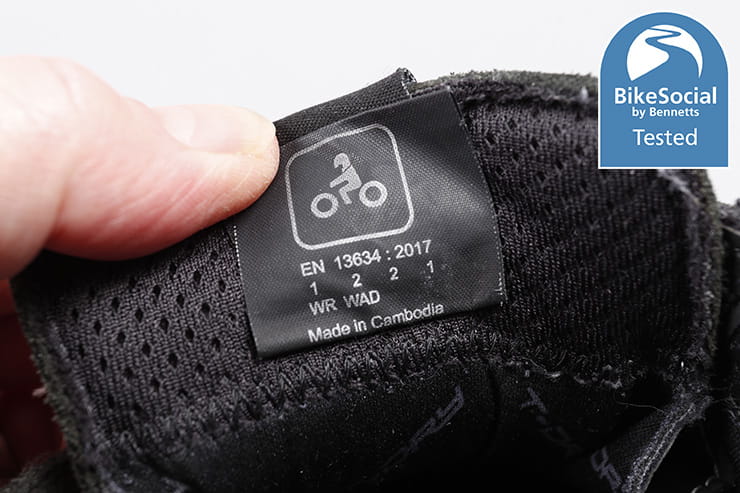 You wouldn’t expect the TCX Street 3s to offer the same levels of protection as a pair of dedicated motorcycle boots, but they’re actually surprisingly impressive.

All bike kit has to be certified to a recognised standard, and with boots it’s EN 13634:2017. There are typically four extra numbers to be aware of on the label, each being ‘1’ for the minimum and ‘2’ for the higher protection level. While the Streets score 1 for boot height, that’s to be expected as they’re only ankle boots. Impressively though, they score 2 for impact abrasion resistance and for impact cut resistance, which is better than many boots out there, including the old Street Ace. The TCX’s final ‘1’ is for transverse rigidity; their resistance to being crushed sideways.

The WR means they’ve been tested for water resistance, while WAD indicates a pass for water absorption and desorption. 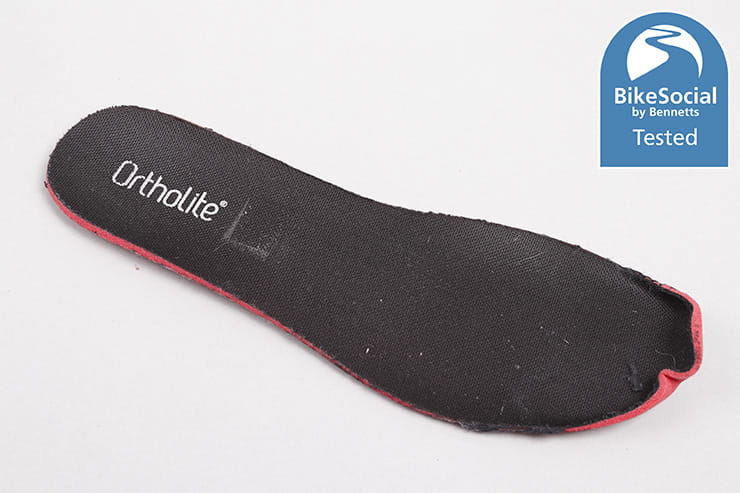 I can’t stress enough how comfortable these boots are – on the bike they’re great, but it’s no problem to spend all day on your feet in these.

The only slight issue some might have is that, thanks to the waterproof membrane, the TCX Street 3s can get a little warm in hot weather. In the UK it’s never really an issue, and I’ve worn the older versions of these in Spain with no complaints.

The Ortholite footbed isn’t particularly thick, but it does a good job of working with the sole to prevent my feet aching after a day in them. I’ve also been pleasantly surprised at how well they insulate against cold floors when walking; some fashion boots will see you feet getting chillier much more quickly. 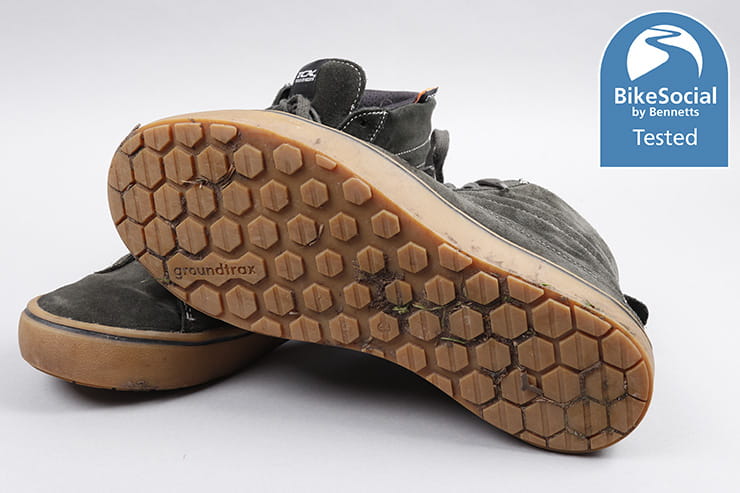 The sole is proving hard wearing, with decent grip on most surfaces. While there’s not a deep tread, it’s enough when walking around outside, but it doesn’t feel awkward on motorcycle pegs.

I’ve also used these on a push-bike with small, raised metal pegs that tend to tear at softer soles, but these are standing up well. Compared to my old TCX Street Ace boots, which I’ve had for several years, this is an improvement in both resilience and grip.

These aren’t really designed to pair up with waterproof trousers, and their lack of height will limit the seal they can provide, but they are waterproof. Whether you’re commuting through the rain or skipping though puddles, these don’t let the water in through the uppers, but do expect it to soon wick down from the top when on the bike.

Also, if you’re riding in the rain, your feet will also pick up road filth, which can spoil the look of the nubuck, so keep this in mind. If you expect to get them filthy a lot, consider something with a more traditional leather finish. 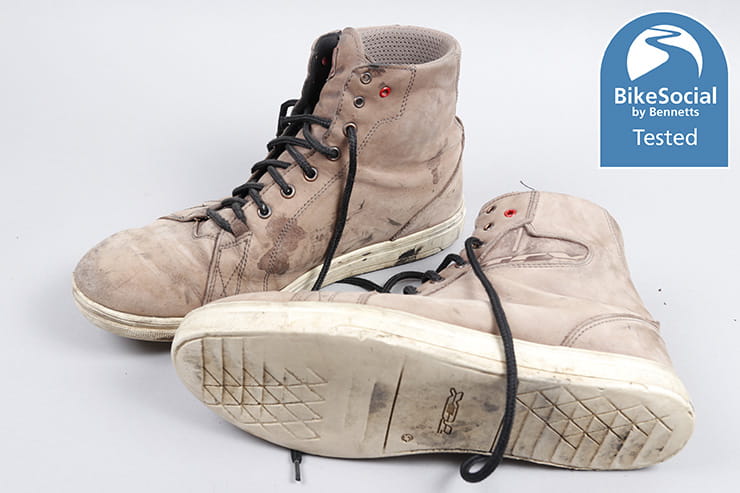 My old TCX Street Aces are still going strong, but the Street 3s are a definite upgrade

Three alternatives to the TCX Street 3

TCX is one of the leaders in this style of boot, but if you want something different, do shop around, keeping in mind the price and the CE-certification ratings…

These are just three of many alternatives – you can find all the boots we’ve reviewed here and be sure to regularly check for the discounts available through BikeSocial membership. 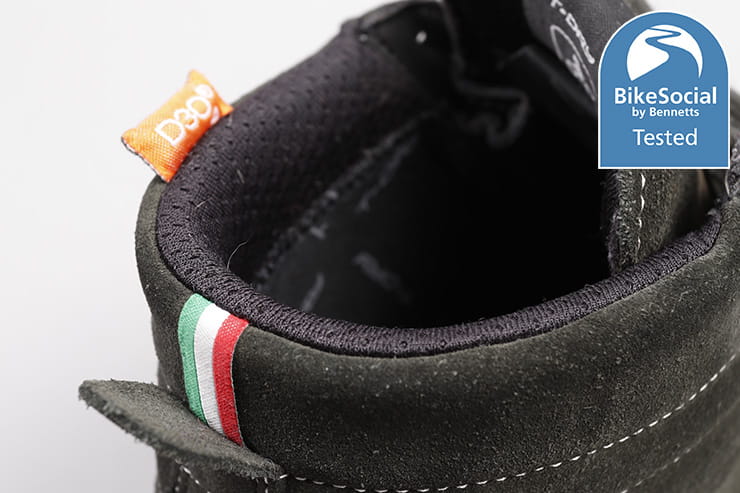 The TCX Street 3s can’t offer the protection of a good-quality pair of full-height motorcycle boots, but they do provide very good abrasion and cut resistance, they protect the ankle, and they look great, though do expect them to pick up wear (and filth in bad weather) on a motorcycle – I’ll update the pics every so often so you can see how they progress.

I really can’t see the point in buying pure fashion footwear when for similar money you can buy these protective boots that are comfortable all day long, whether in a trendy café (rare for me) or trudging around the park with the dog.

Given that my favourite riding kit is a set of CE-approved Hood motorcycle jeans and a leather jacket, the TCX Street 3s are pretty much perfect.