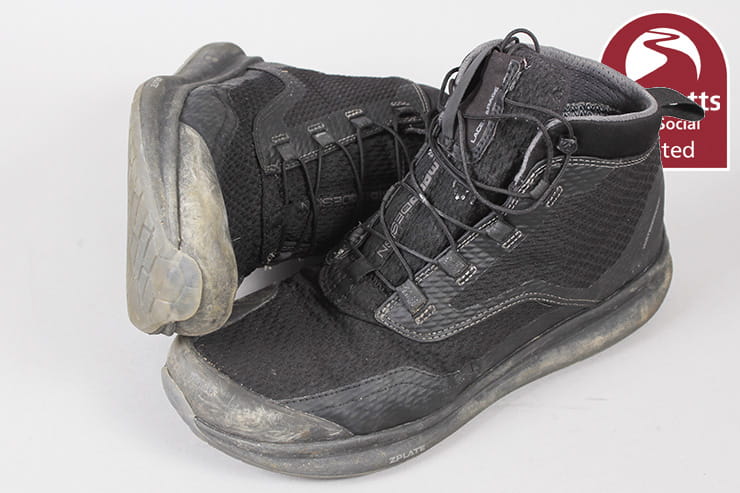 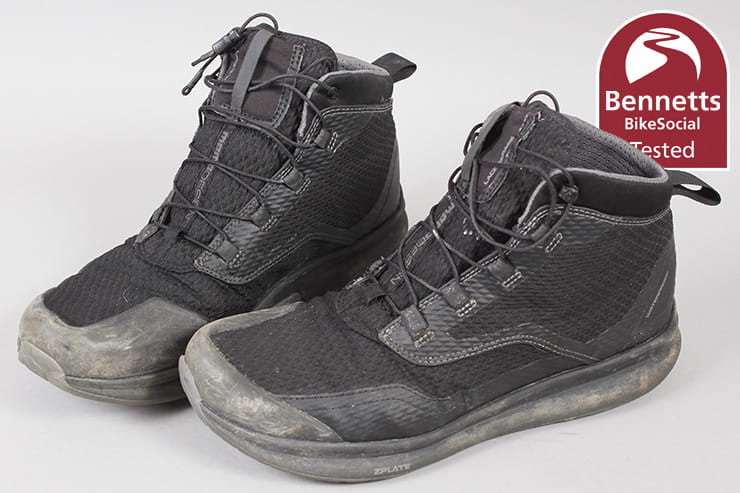 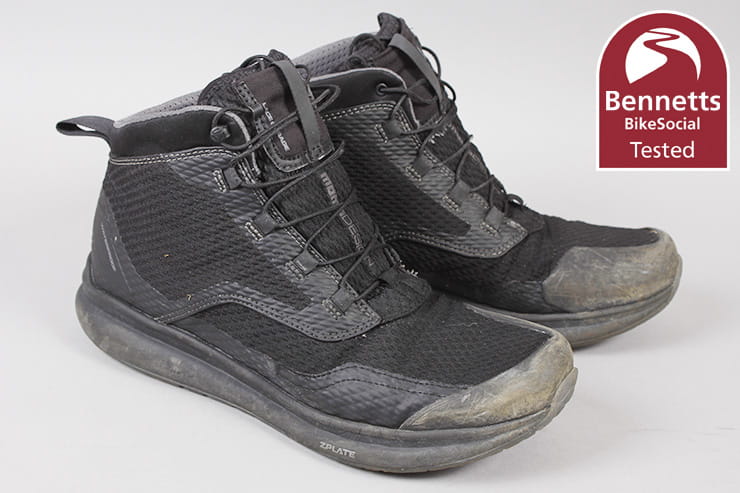 Back when I were a lad, dreaming of the day I’d own a Lamborghini Countach, I’d drool over the Momo steering wheels in the Carnoisseur magazine I’d got from WH Smiths. I never did get one (a wheel for my Mk II Escort, that is, obviously not the Lambo), but even now the name Momo makes me think of cool performance stuff.

Maybe it’s the ex-designer in me that gets excited by the brand, but TCX has released a range of motorcycle boots with the iconic Moretti-Monza logo, and it’s the new Firegun-3 boots that I’m reviewing now… 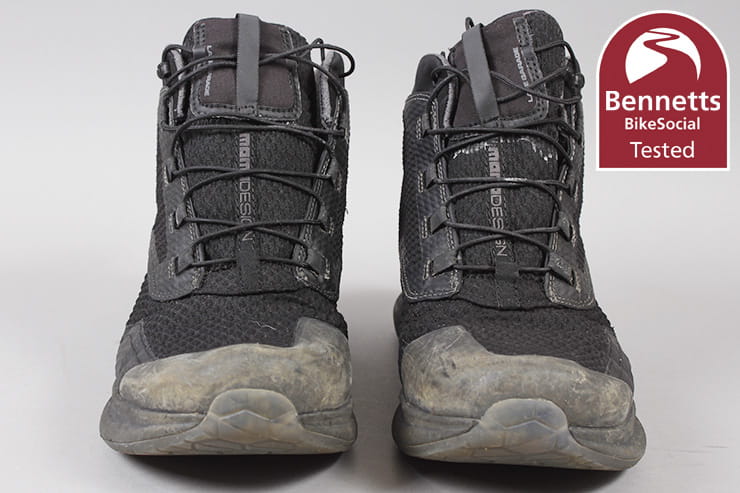 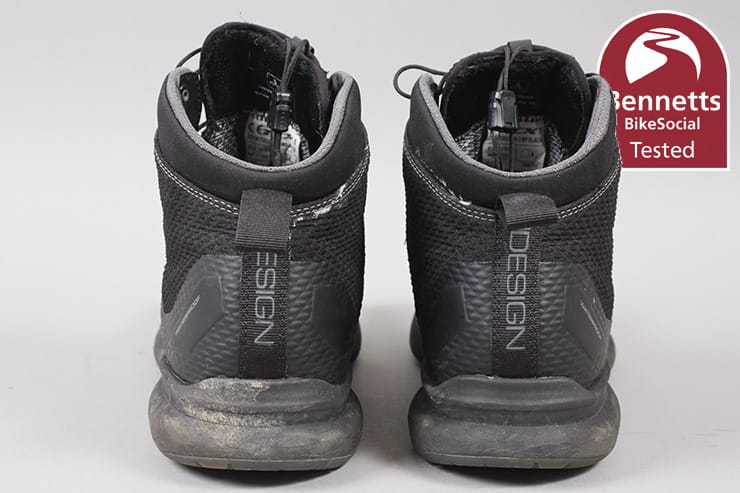 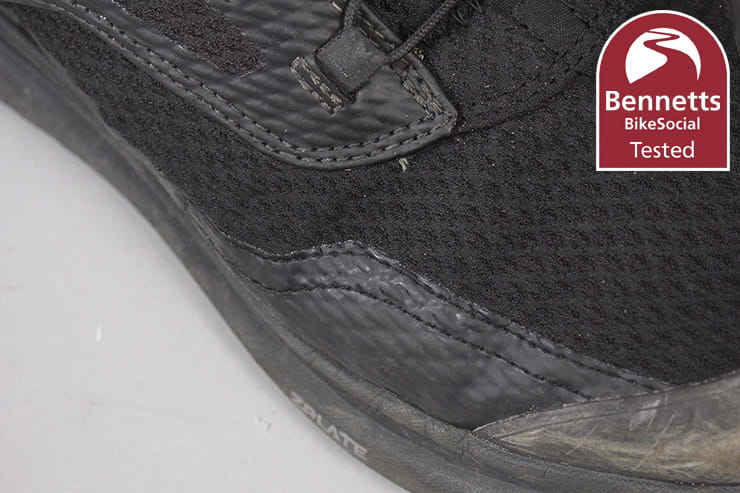 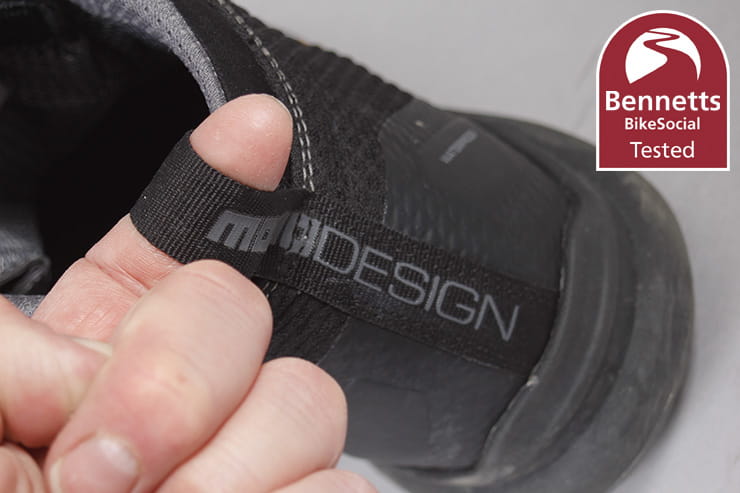 There are three MomoDesign boots available – the Firegun-1, -2 and -3. 1 and 3 are waterproof, and only the 3s, which look the most like traditional boots and that I’m reviewing, are also available in women’s sizes.

The upper is an ‘engineered fabric’, which basically means they’re not leather. They are very cool looking though, with a distinctive textured finish complimented by a TPU (thermoplastic polyurethane) toe section and a rubberised lower section all the way around.

The midsole is EVA (ethylene-vinyl acetate to save you Googling in); common on sport shoes, but not hard wearing, which is why there’s a tougher rubber outsole between this and the road.

The toe section wraps around to form a shift pad, but it’s very small; on my 1999 Kawasaki ZX-6R it just misses the gear selector, but it’s never uncomfortable. Equally, on my BMW S1000XR and Honda MSX125 the Momos aren’t a problem. Maybe constant fast shifting on rack with a sportsbike might start to put pressure on the top of the foot, but that’s not what these casual-style boots are for. 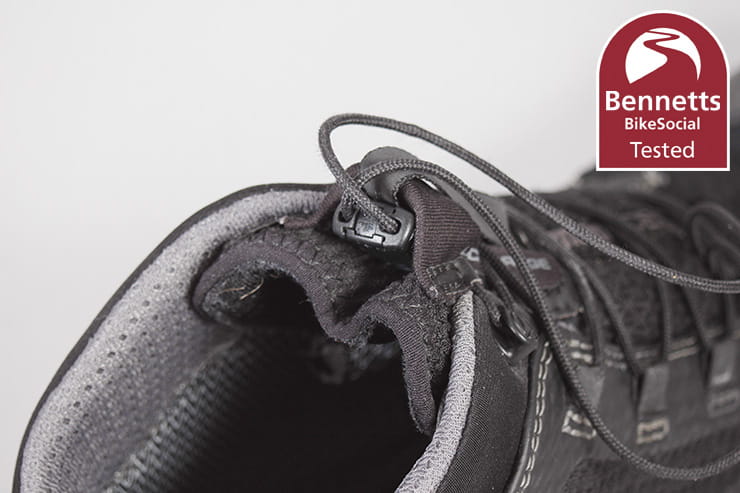 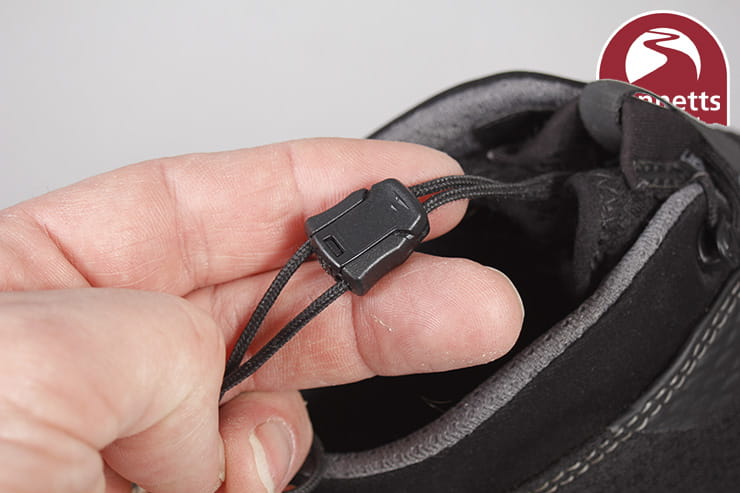 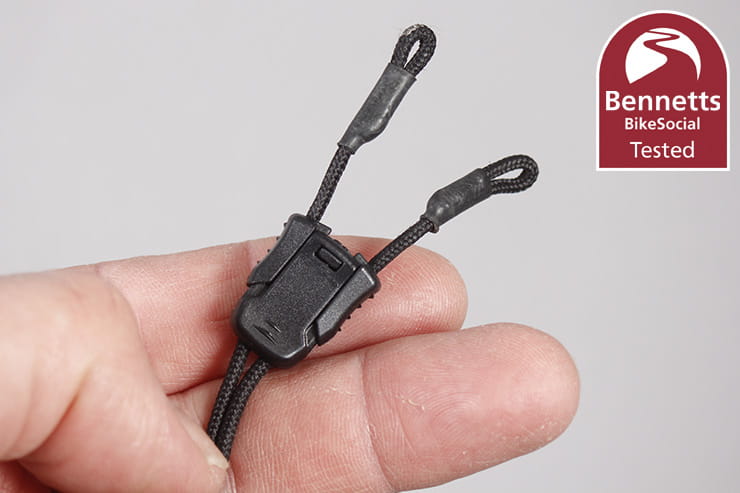 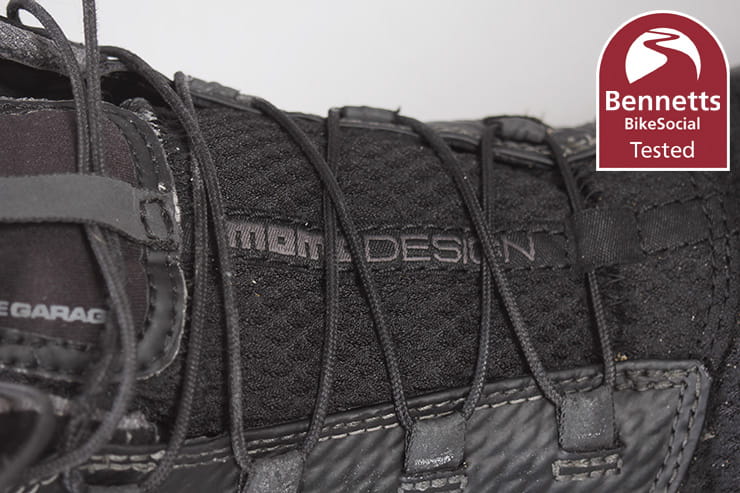 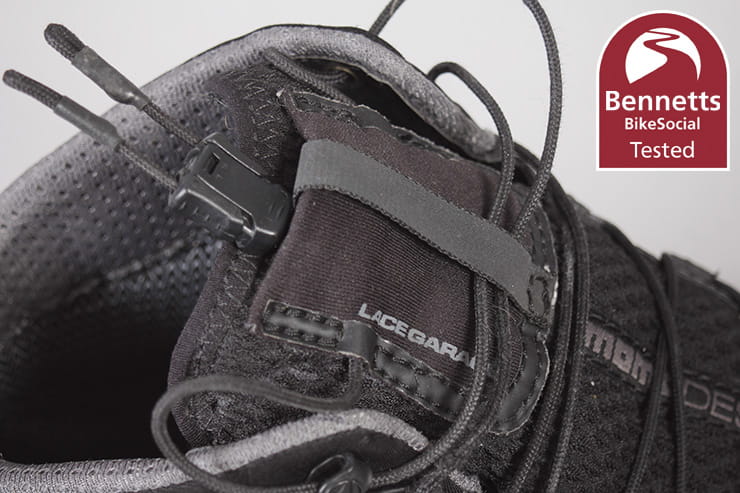 The Firegun-3s are fastened with elastic ‘laces’ pulled through a very effective toggle, which tucks away in what’s described as a ‘lace garage’ on the top of the tongue. The thing is, once they’re pulled tight around your feet, there’s a fair bit of loose lace flapping around, which needs to be tucked under the bottom of the laces. That’s fine, and they’ve never come free – partly thanks to the loops on the ends finished in heat-shrink tubing – but they don’t look quite as trick as they do in the brochure pics with those stray bits. I guess you could tuck them down the sides of your feet if you wanted, but it’s a bit awkward.

There is an issue with the Momos though in that one eyelet in each boot – at the top – is made in such a way that the lace gets cut through over time. This is annoying, but also problematic due to them being such a unique design. Mine failed after four months of use, but fortunately the UK importer – Nevis Marketing – supplied a replacement. You could swap them for 'normal' laces, but TCX really needs to sort out the edges on the eyelet to remove the issue.

The Momos fit me very well in my usual size – despite having slightly wide feet – and they slip on easily with the tough loop on the rear giving you something to hang onto. 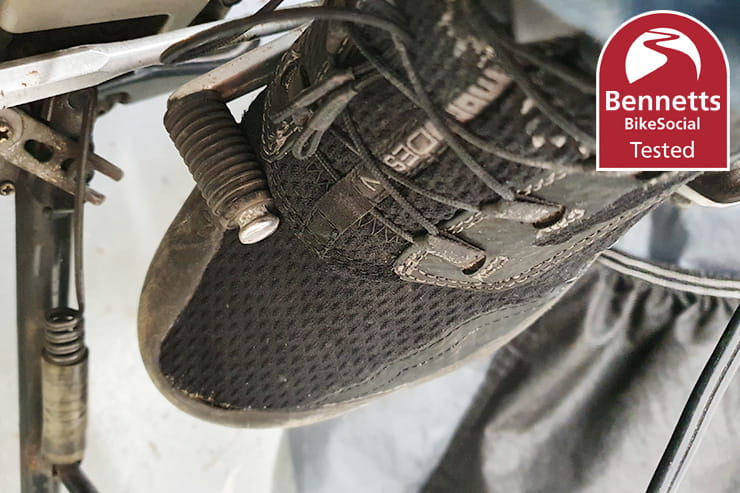 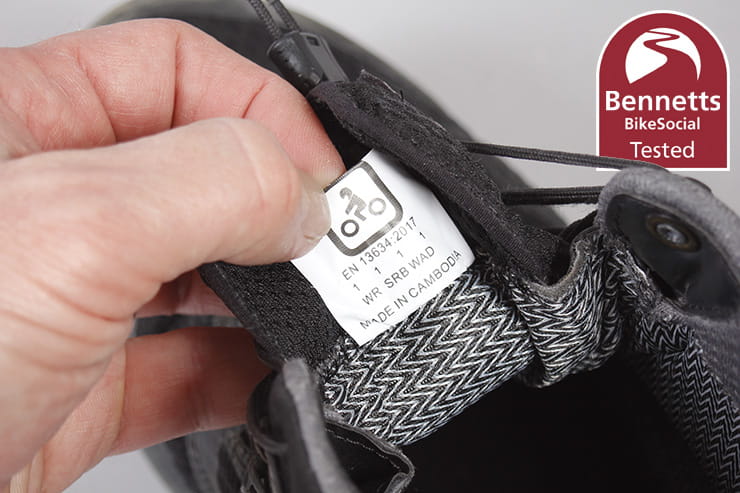 Your ankle’s protected with small armour panels on both sides, and lift the label in the Momo Firegun boots and you’ll see they conform to EN 13634:2017, with four ‘1’s underneath. That means they’re ankle height, and that they reached level 1 for impact abrasion resistance, impact cut resistance and transverse rigidity.

Level 2 is the higher standard, but these are still boots tested and proven to meet the required safety standard. The WR, SRB and WAD acronyms means they’re tested as water resistant, they’re slip-resistant on smooth steel that’s been treated with glycerol (always a problem when I’m standing on a kitchen sink), and the lining materials have passed the water absorption and desorption test. 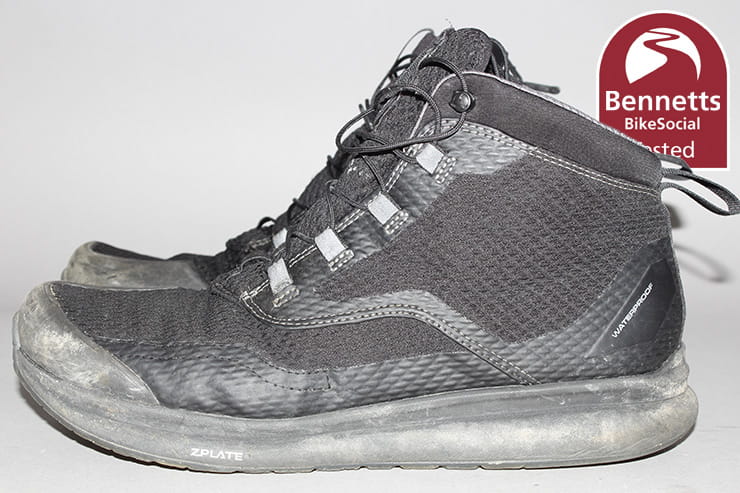 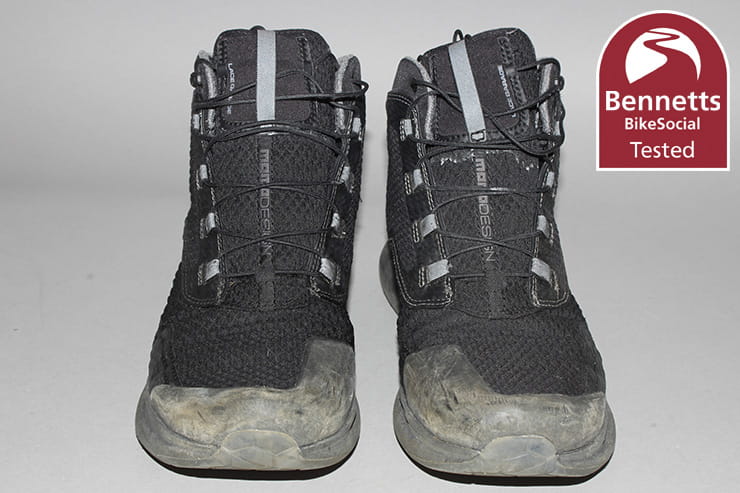 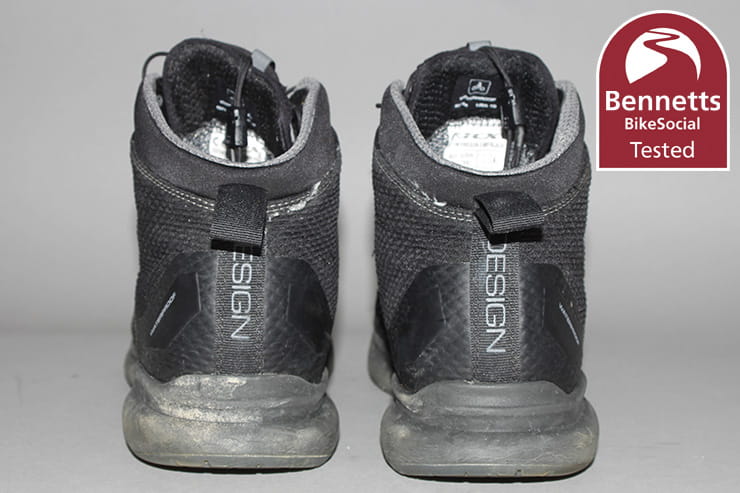 Using the on-camera flash, you can see the small reflective panels

In practice, that means you can be confident when riding in them that they’ll give a decent level of protection, and the sole won’t crush if your foot’s caught under the bike. If you’re looking for more safety in a casual style, check out some of the leather alternatives, like the TCX Hero boots, for instance, which do meet Level 2 testing.

There are reflective details on the lace holders and top of the tongue – a neat touch though they’re small so won’t be dazzling too many drivers. 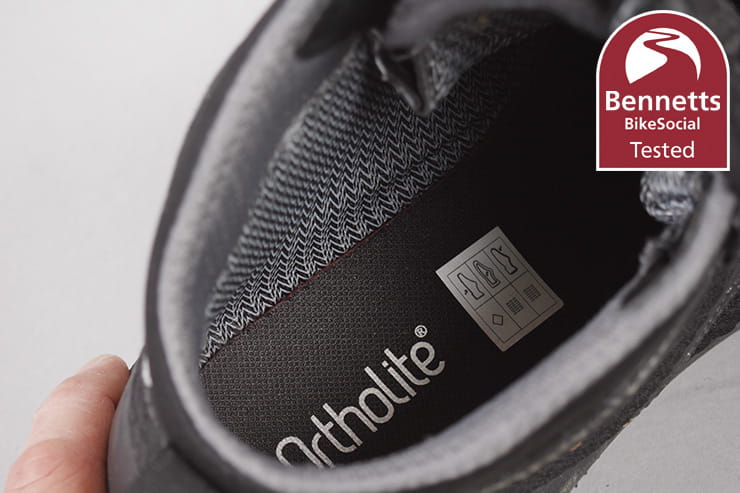 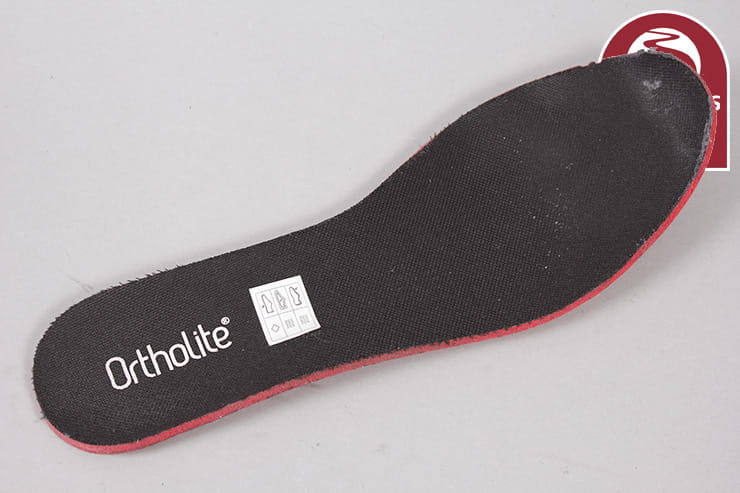 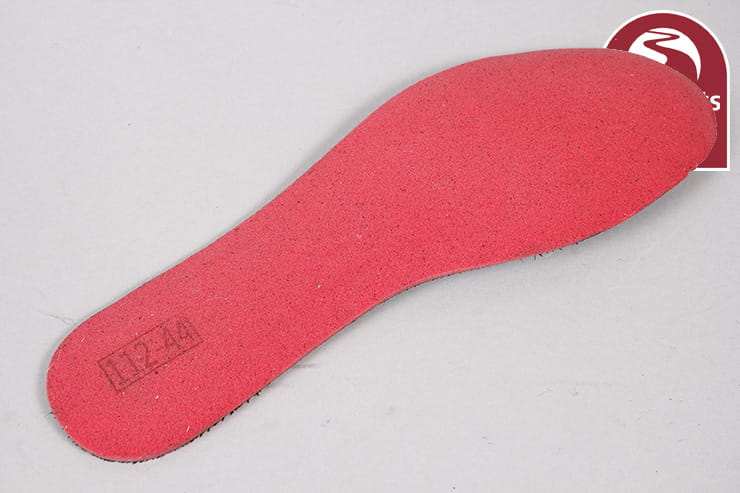 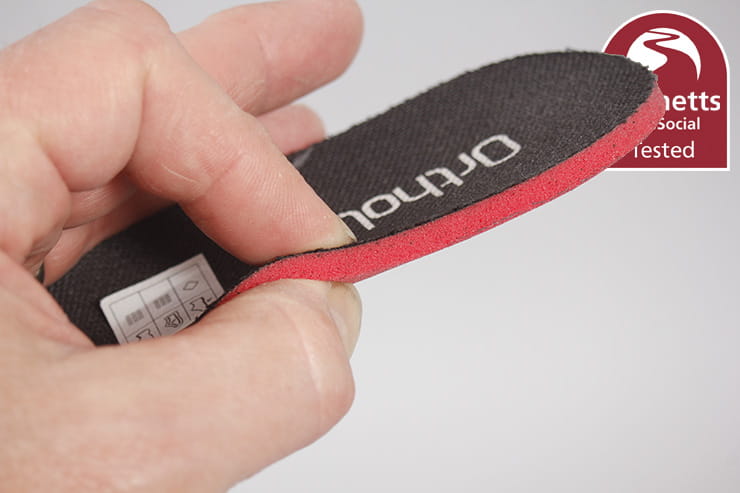 The Momo Firegun-3 boots are very, very comfortable. On the bike they’re great, but I’ve also worn these almost every day – all day – for the past two months. The furthest I’ve walked in them in one go is just under 10 miles, and that was across gravel paths and grassland.

They’ve been everywhere with me – 120 miles on the motorbike then doing the shopping, or simply walking the dog – and they’ve always been nothing but comfortable thanks to the soft midsole and decent Ortholite footbed. I’ve also used them for 15-mile bicycle rides with no difficulty at all. 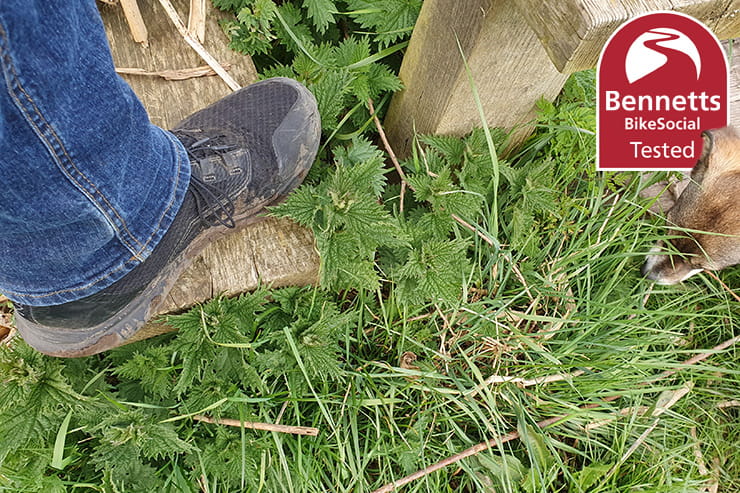 Clearly, I’m far from a dedicated follower of fashion, but I see no point in spending money on fashion shoes when ones that are designed to be protective on the bike can look just as good (if not better), and do the same job when you’re not riding. They’re dearer than a pair of High Tops, but you can tell yourself that you’re saving that money by only buying one pair of boots that do it all. More fuel for the bike. 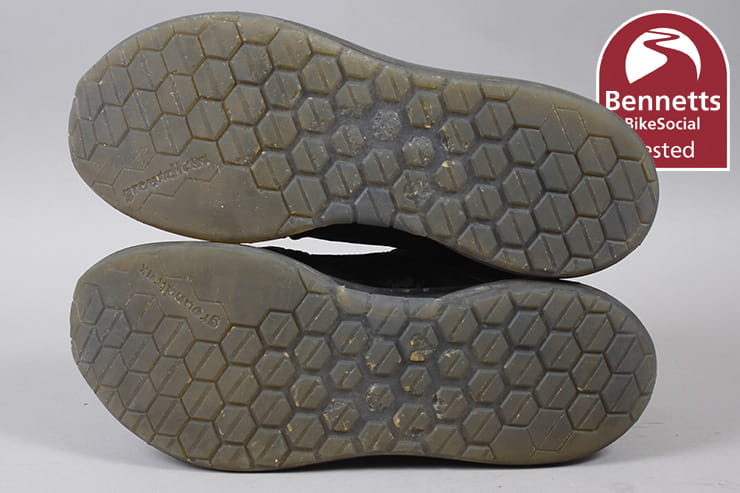 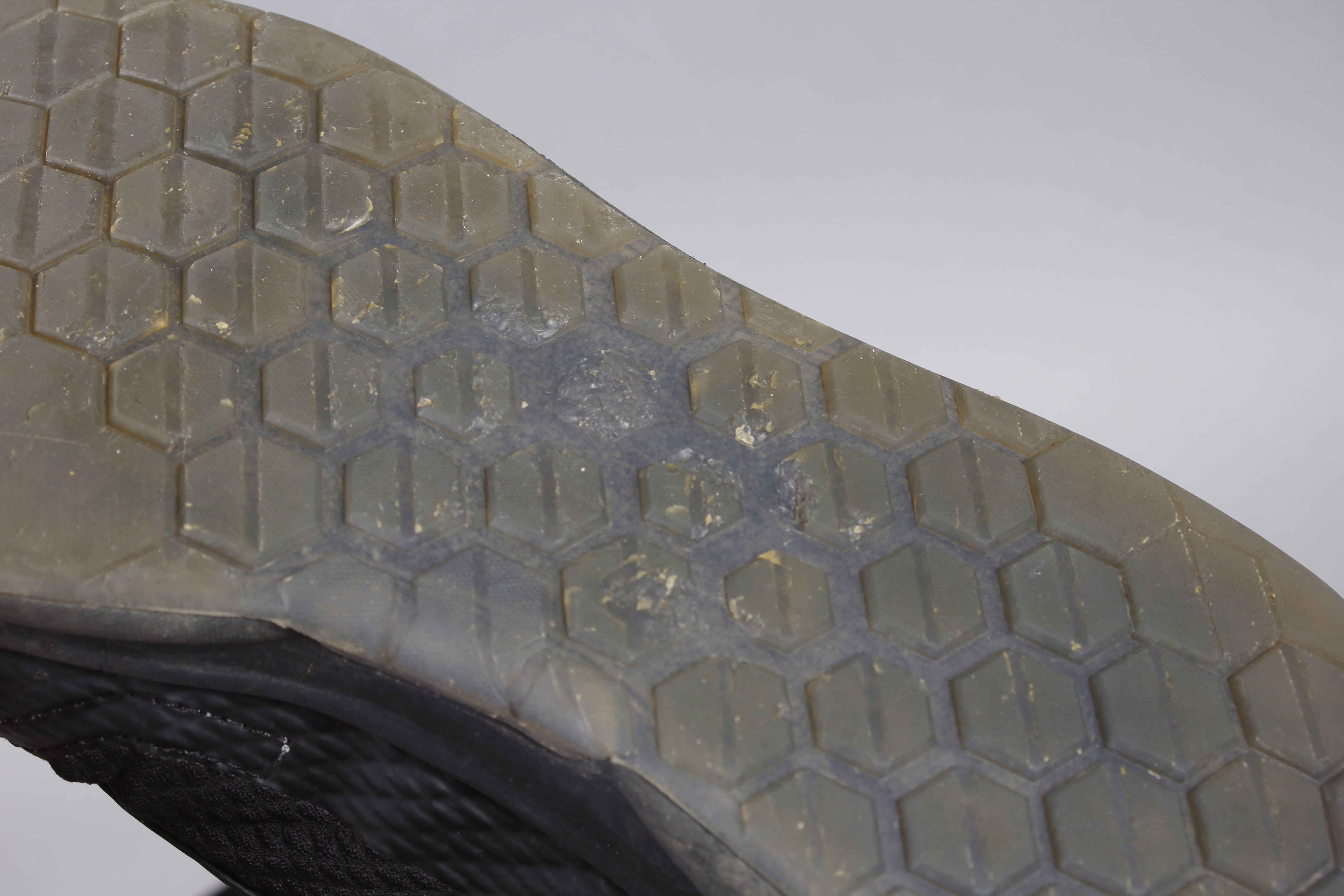 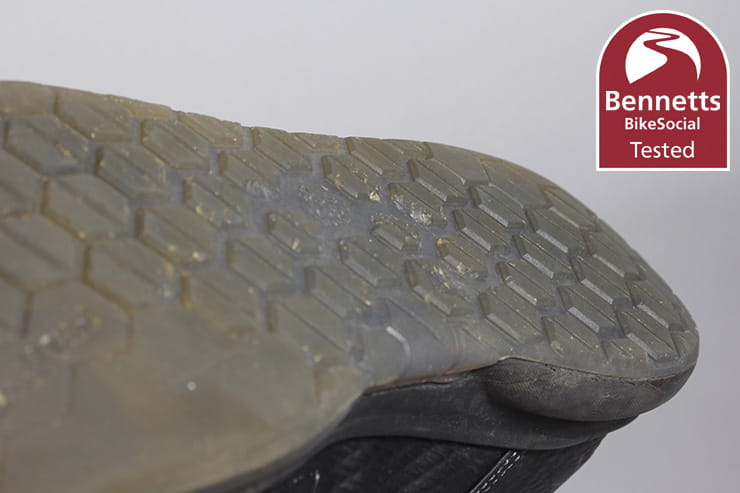 The sole is proving hard wearing with no real signs of thinning out (I wear soles very quicky with a lop-sided walk), but they have got some damage due to the sharp pins on my bicycle pegs tearing at them. This isn’t going to be an issue on anything but motocross pegs, and they haven’t got any worse.

Like most boots, I still find them slippery on fuel-coated garage forecourts, as well as wet tarmac and concrete slabs. 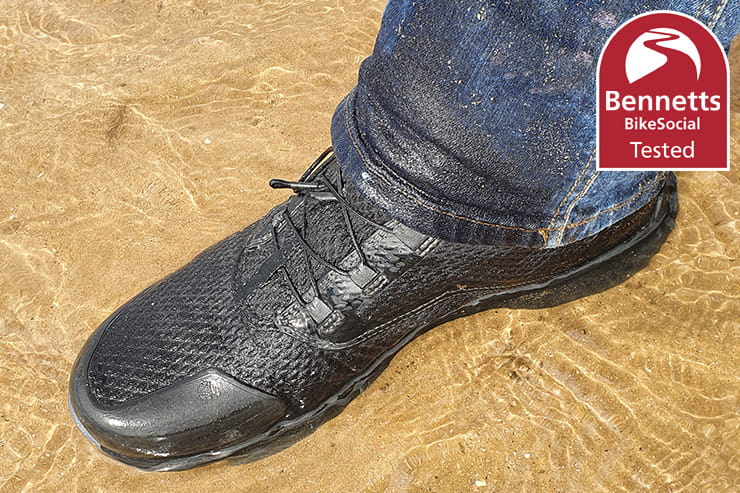 Wading through the sea after two months of solid use should show any potential for leaks in the membrane, but they’ve stayed completely dry inside, as they did after thoroughly hosing them down.
These still shouldn’t be considered true all-weather boots of course, not least because of their height, which makes a seal with trousers very difficult. It’s the outer material that also lets them down though as it holds onto water, leaving them damp on the outside for a good 24 hours unless you pop them somewhere warm like the airing cupboard. During a ride after rain of course, the wind soon dries them.

That absorbent outer can also make them feel a little damp, but it’s just the evaporation of the water making that part of the foot slightly colder than the rest.

Ultimately these are city shoes really, so the waterproofing is a useful bonus. It does come at the expense of them being a little warmer on hot days, but when out in the breeze, that fabric does let the wind cool your feet, without feeling cold even down to 10°C. It is this heat that would stop them being perfect for walking all day every day in southern Spain – they’re not open-mesh sneakers – but given our inclement weather, I always opt for waterproofing in my footwear. 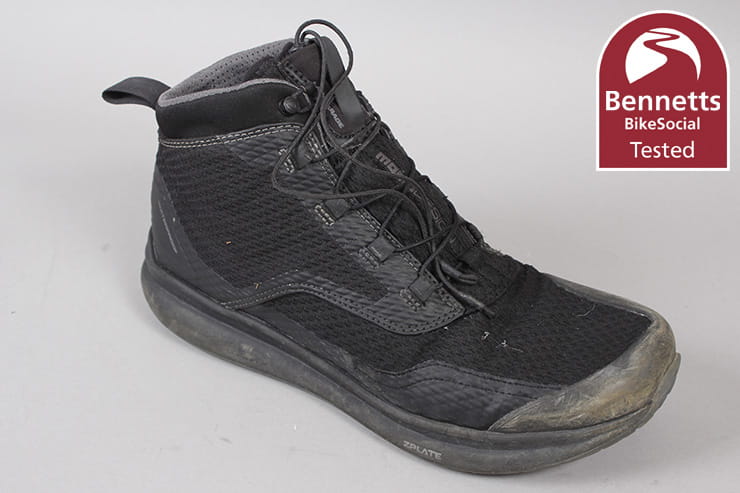 The Momo Firegun-3s are great boots for city scooter riders, but also anyone on any bike who wants something they can leave on all day. With a pair of riding jeans I’m more than happy wearing these from morning to night, and while they’re a bit more expensive than TCX’s own Street boots, they’re very stylish and look fairly unique without being over the top.

The problem with the fastening system is a disappointment, and I'd urge you to be aware of it, but other than that you should save your money on a separate pair of casual Converse or other fashion boots, and just get a pair of these.