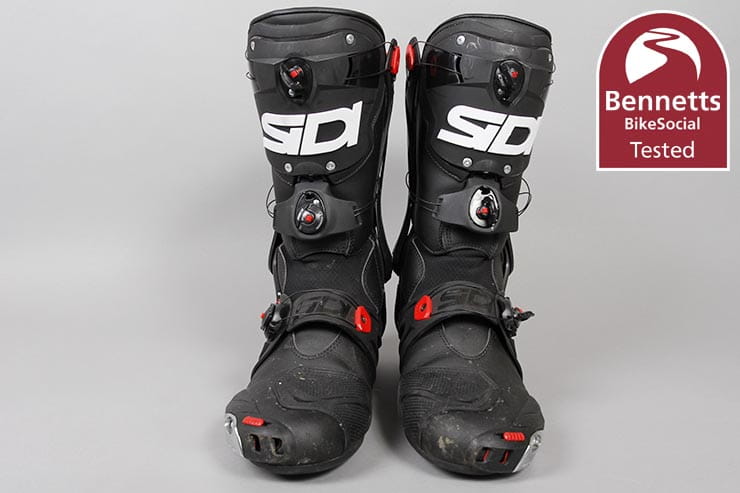 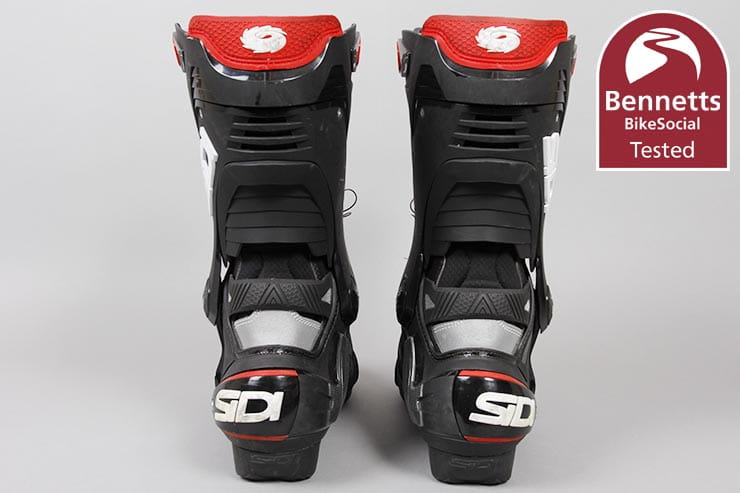 The Sidi Rex boots on review here might be the company’s top-of-the-range footwear (only a couple of its MX boots are more expensive), but they’re certainly not for everyone. These are sports-focussed boots, so it’s important to understand what that means as many riders might be better off with kit costing much less.

However, if you’re looking for a seriously high-performing sports boot, I’ve been wearing these on road and track with my 1999 Kawasaki ZX-6R and my BMW S1000XR to find out if they’re worth it…

The Sidi Rex is available in this version, and an ‘Air’, which has a perforated upper. Both are the same retail price (and often available for less than this in stores), though unless you’re riding on track in very hot climates a lot, I’d suggest these standard versions are the best bet.

Like most boots of this type, the Sidis are made with a synthetic leather microfibre upper, an inner boot design (this isn’t removable), a stretch area over the bridge of the foot and at the achilles, as well as various parts and details that add to the premium feel.

That synthetic upper is prone to scuffing and can soon look tatty – like most boots – though there’s a lot of plastic in the key wear areas that make these look better for longer. 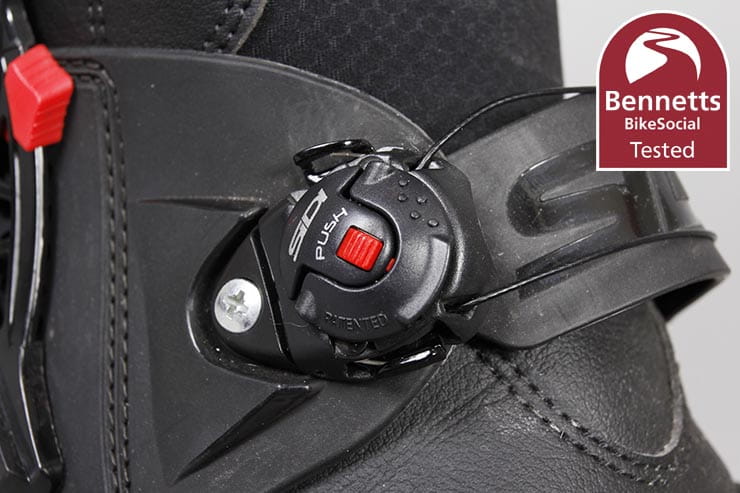 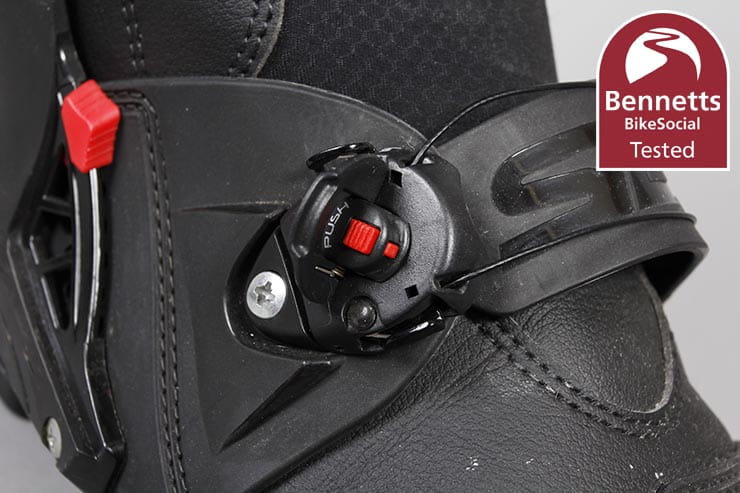 The Sidi Rex’s use a wire fastener to draw the boots securely around the top of the foot, the shin and the lower leg. While this system looks flimsy, Sidi’s ‘Tecno-3’ closure is very similar to the Boa fastners used on many products in that it’s a plastic-coated steel cable. I’ve had this system on various kit, including the Knox Handroid gloves, and never had any problems at all.

These aren’t quick to slip into, though a loop on the inner boot does make it a bit easier to pull them on. The additional time taken to cinch these up over a typical Velcro/zip design is worth it for the secure feeling they give, as well as the ‘always just right’ setting of the three fasteners. 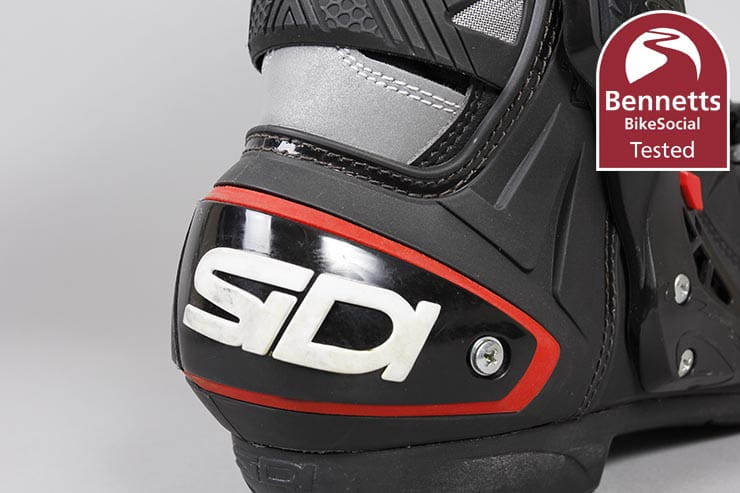 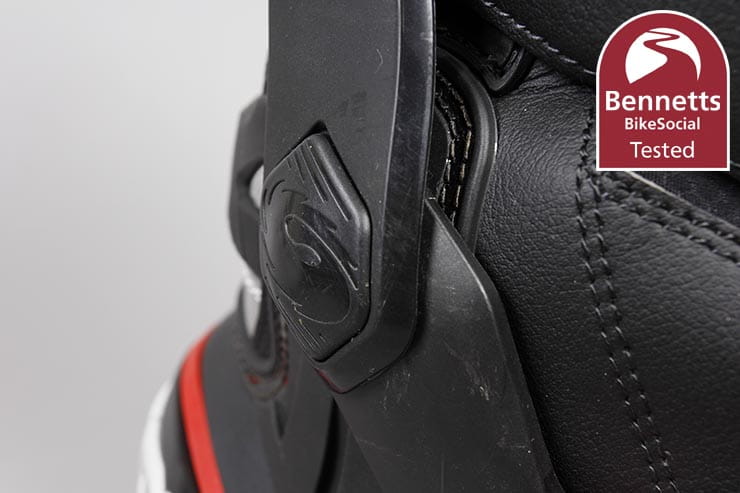 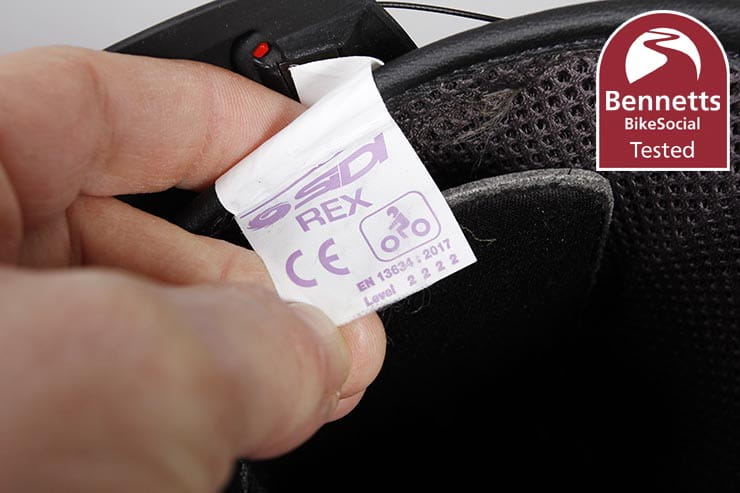 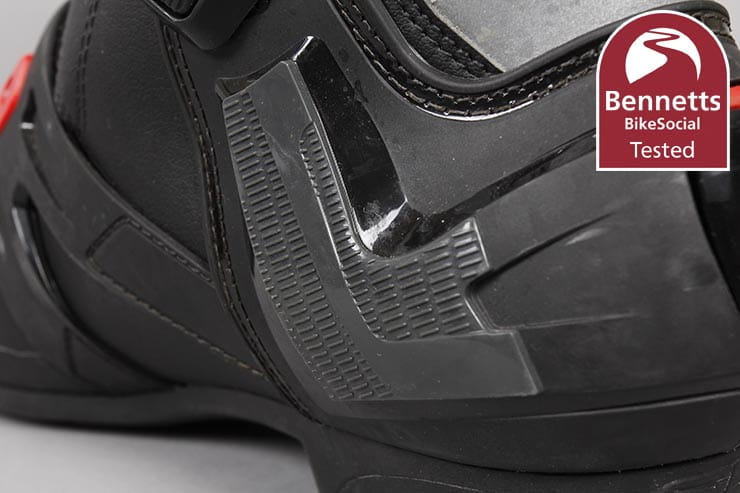 By law, all motorcycle boots must be Certified as Personal Protective Equipment under EN13634:2017, so as you’d expect, the Rex’s have been tested. They also achieve the higher of two test standards for abrasion resistance, impact cut and transverse rigidity (crush-resistance of the foot area above the sole).

The large nylon/glass fibre ankle support brace on the Rex doesn’t restrict normal movement, but it does an excellent job of reducing the opportunity for the foot to twist sideways in a crash.

The toe slider is replaceable, while the heel is cupped in a hard protective shell with a soft inner (again, replaceable). Further around the heel on the inside of the foot is a rubbery patch that helps the boot to grip the heel plate of the bike. The design of the heel does add some bulk at the back, which can make it a little awkward to flick the side-stand down on some machines, but you get used to it. For the protection it offers, I’m not put off. 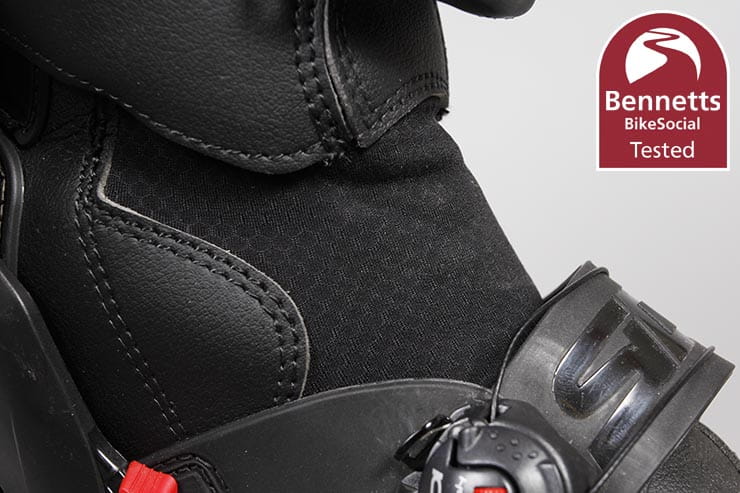 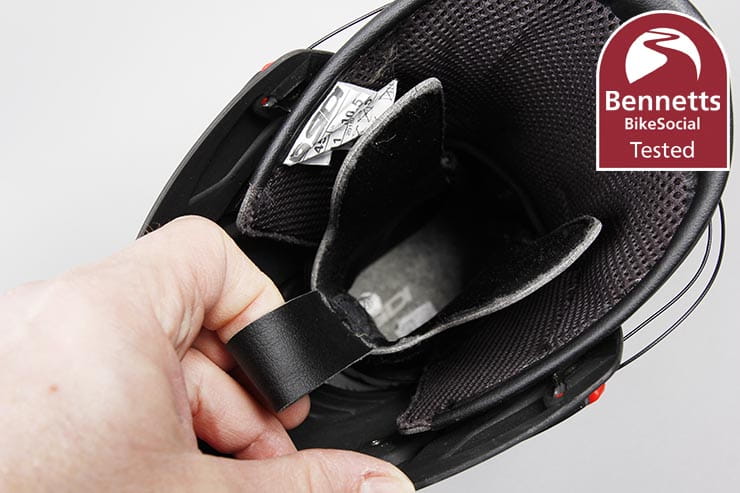 Thanks to the elasticated sections and the large range of movement in the top, these boots should accommodate most riders. Fit is of course very subjective, but I’ve found my foot feels well supported all over. The construction means my riding denim doesn’t always fit over them, though they can be tucked in – this will depend on what you wear; leathers tuck in with no problems.

Some leathers are designed to allow them to fit over boots (why would you do this?!), so if this is important to you (seriously, why?!), check the fit as it will of course depend on how much space they have. 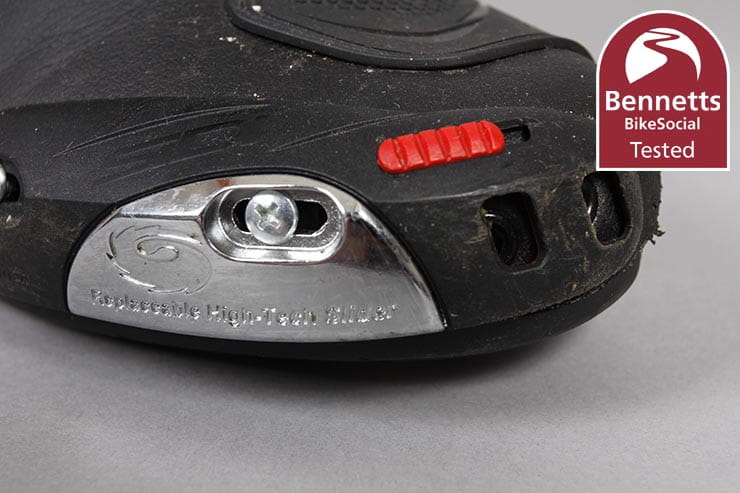 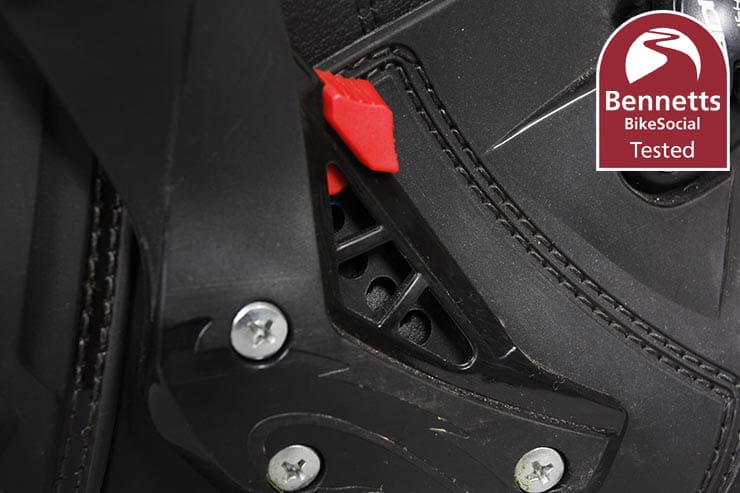 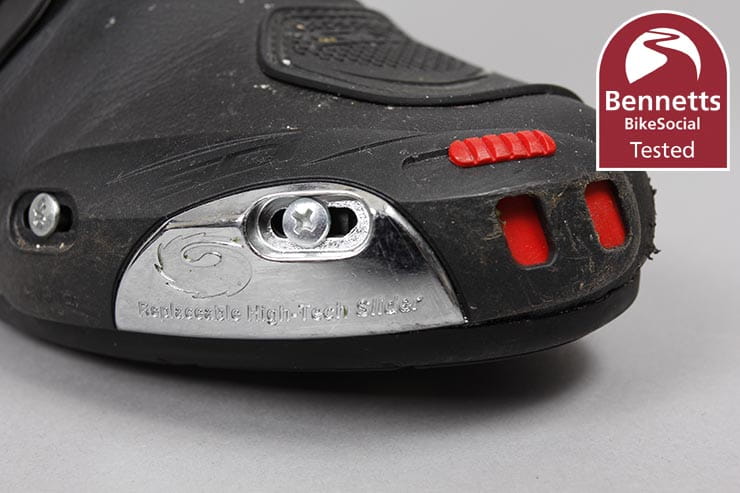 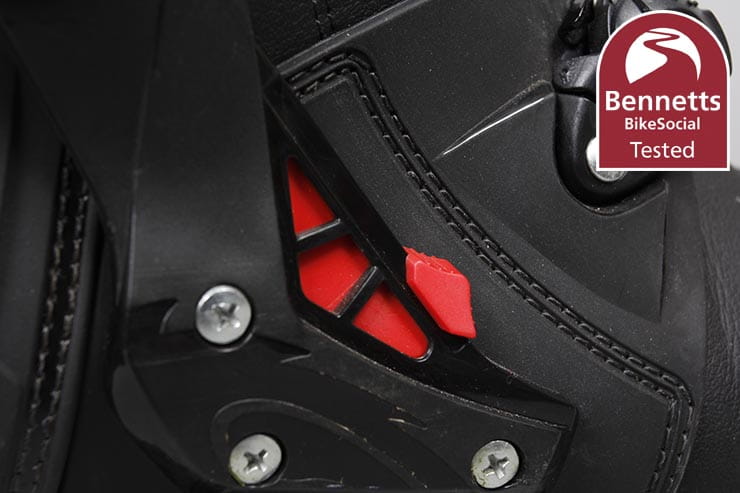 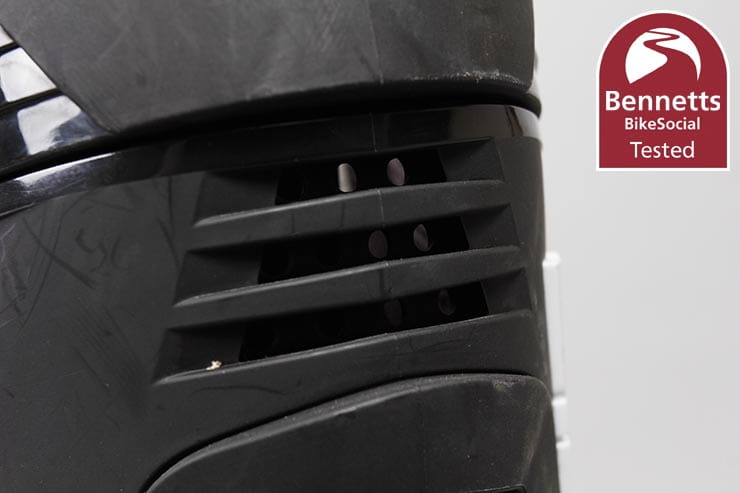 Each boot has a pair of closable vents built in – one at the toes and one on the side – as well as exhausts on the upper rear. These are more than just a gimmick, effectively pushing some air into the boots at speed (though of course this will depend on the fairing on your bike). For UK riders, I’d suggest this is all that’s needed – the ‘Air’ version of these boots, with the ventilated leather, would likely be a bit chilly for a lot of the year.

Comfort is the main point you need to be aware of in a sports-oriented boot like this; the sole is relatively thin in order to give the best possible feel on the pegs, but this can make them far less comfortable than more touring-oriented footwear when off the bike.

When riding, there’s a lot more vibration and pressure transferred to the base of your foot, so while this is important on track, do consider if it’s something you want as a road rider.

Having said all that, these are more comfortable to spend the day in than some others I’ve tried, and a 200 mile day just led to a slightly sore little toe. I have wide feet, and the edge of the toe slider seemed to be a pressure point, though these are easily removed to take the plastic down a touch with a file. Honestly, if I’m riding and not expecting to walk around a lot, I prefer to wear these for the sheer protection they offer.

When I rode to Cadwell Park for a Bennetts Rewards track day – by mid-afternoon I had to pop them off for a breather, but I do have an odd way of walking, and also don’t have the best riding techniques on track, so everyone will be different.

The point is that I can easily go for hundreds of miles and spend a full day in touring-style boots with a more relaxed fit and a thicker, softer sole, so be honest with yourself about whether you’re buying boots because they look cool, or whether you’ve really thought about how you’ll use them. 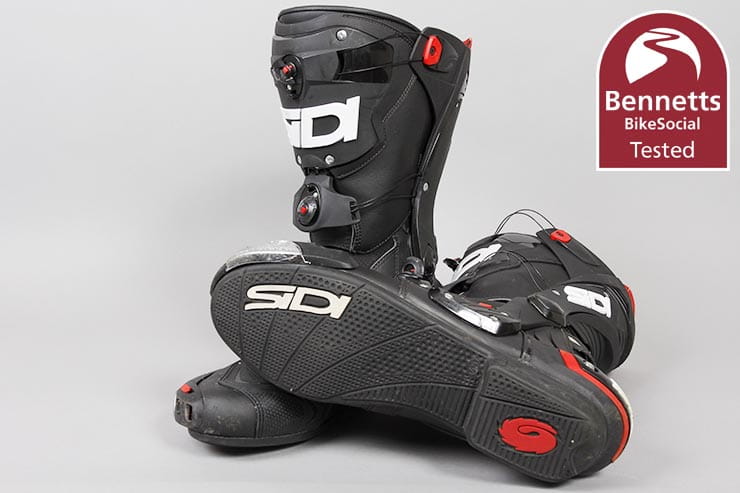 The rubber sole is pretty hard-wearing as it’s designed to have some resistance to knurled race footpegs, but it’s still grippy enough – with a very light tread pattern – that I haven’t had any problems with grip at garage forecourts. 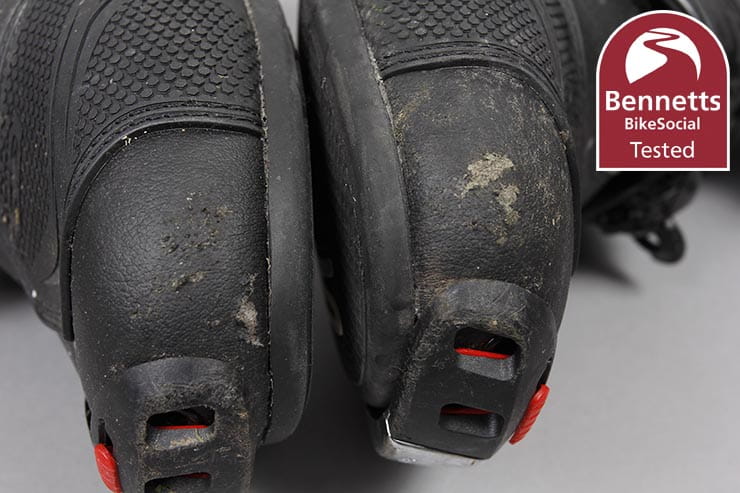 The Sidi Rex is not a waterproof boot – while the outer does repel water to a certain extent, so you won’t be instantly soaked in a shower, there’s no waterproof membrane so don’t expect dry feet in a downpour.

It’d be easy to dismiss boots this expensive, but spend some time looking at the details of the Sidi Rex and you’ll see where at least some of the cost is justified.

If you’re looking for some very well-made and protective sports footwear – and you understand the limitations of boots like these – then they should be at the top your shortlist. I certainly feel a lot more secure in these than I have in anything similar, and while there are cheaper and very well-made options, these take protection to another level.

In my opinion, for anything better you’ll be spending a lot more, so if they’re what you need, and you can afford them, the Sidi Rex are an excellent choice.