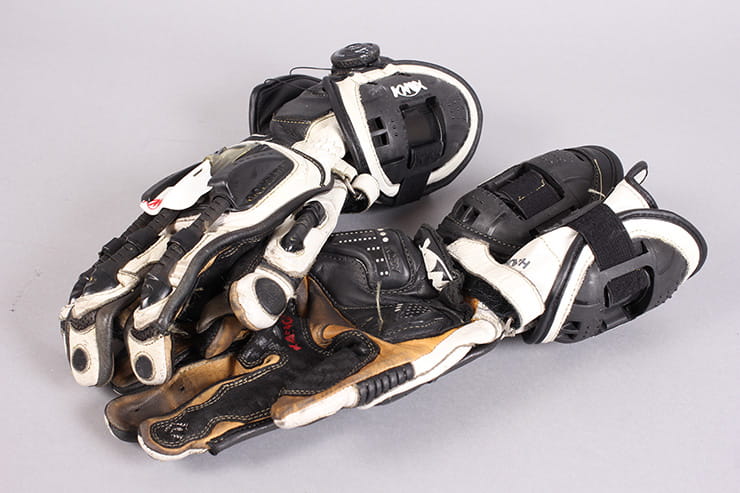 I’ve used these high-spec race gloves on a variety of bikes, having had them for three years. While they’ve since been updated with a revised finger fit, they remain an extremely confidence-inspiring piece of motorcycle kit…

From the first moment I put these gloves on, they were a perfect fit. I found they needed little breaking in, and while of course everybody’s hands are different – so you must try them for yourself – the fingers were a perfect length and the hand snug but comfortable.

A kangaroo leather palm gives good feel thanks to it being thinner and tougher than cow hide, while an ‘Amara’ overlay panel (artificial leather made of polyamide and polyurethane) with silicone print gives extra grip – useful in the wet as leather can get slippery.

The fingers are very cleverly sewn, using external stitching out of the way nearer the webs of your fingers, and concealed stitching nearer the tops, where they’re more likely to hit the tarmac.

Overall, fit and feel is absolutely superb; my only criticism is that the articulated protection on the tops of the fingers makes them rather thick – I’ve been caught out a couple of times when braking hard on a new bike, with the lever coming back and pressing on the glove where my remaining fingers were still on the throttle. It only takes one click of the span adjuster to avoid, but it’s worth keeping in mind if you’re using them for the first time on track when braking with one or two fingers. 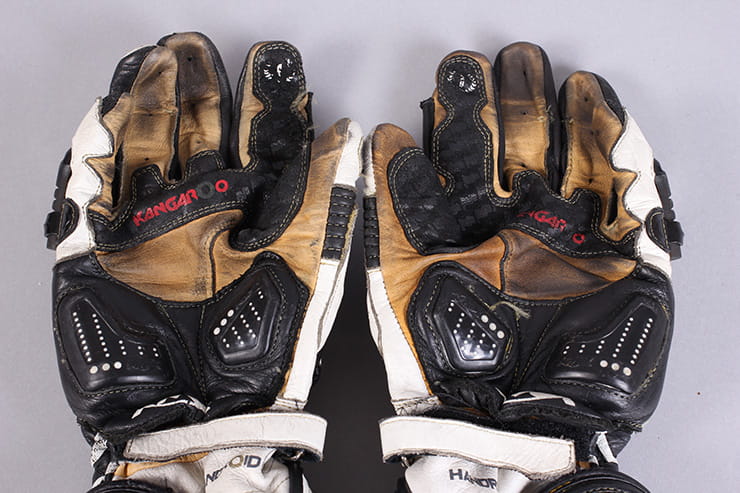 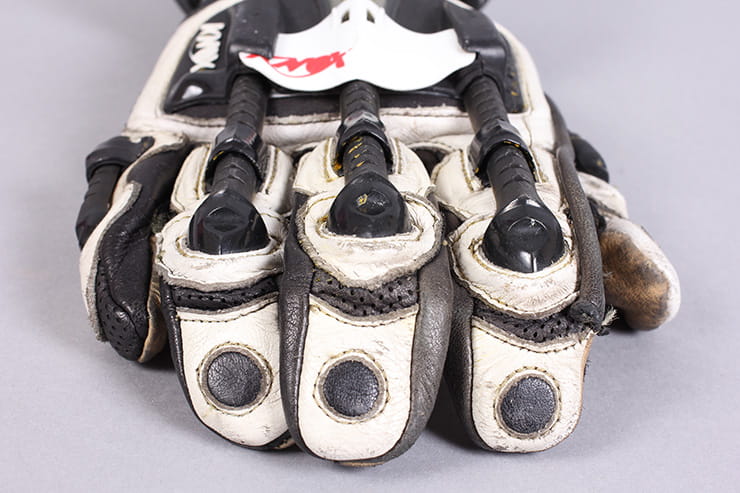 The Handroids are well ventilated, with three holes on the insides of the two middle fingers, as well on the tops of all four. There’s plenty of padding across the tops of the hand for safety, though with limited ventilation built in, so they’re not the coolest gloves, but there’s a balance to be struck if you want the protection. The current Handroids are CE-approved to EN 13594 – 2012.

Being a full gauntlet glove, the Knox Handroids are designed to fit over the cuffs of your leathers, with solid, padded protectors at either side. The knuckles are well covered, as are the full lengths of the fingers, using the sliding protectors that don’t restrict movement. The armour does make the fingers bulkier, and it's here that I have found a limitation at times – during hard two-finger braking, I've occasionally had the lever come back back to the glove, restricting the pull a touch. This can be iron out by winding the lever out a little (assuming it's adjustable), but it is something to be aware of.

There’s also scaphoid protection on the palms – these are two hard plastic sliders that help to prevent your hand gripping the road in a slide – a major cause of damage to this carpal bone. 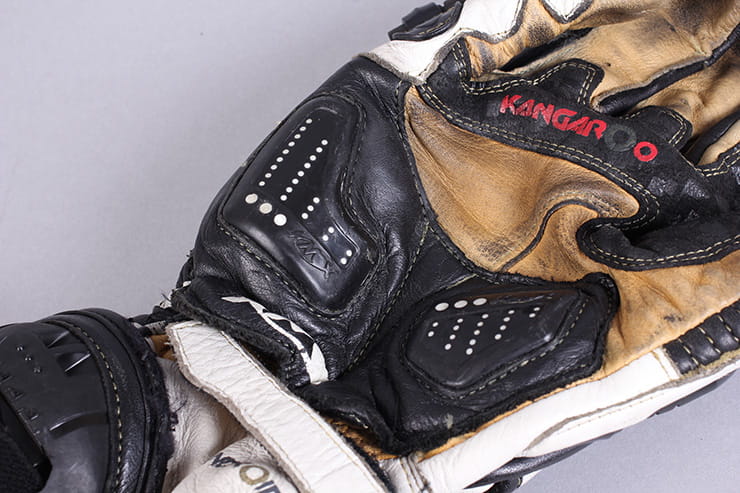 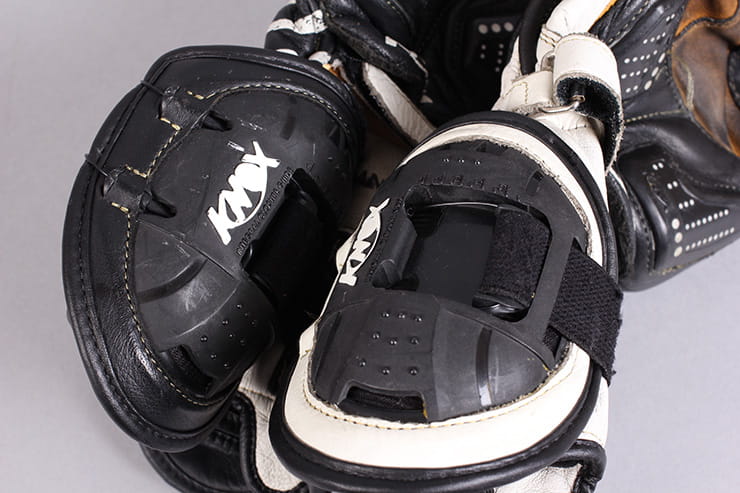 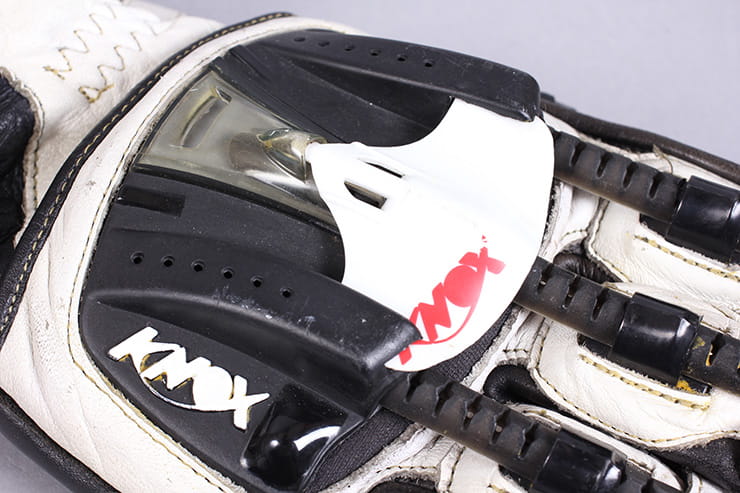 A wrist strap keeps the gloves securely in place, and has a quality rolling buckle, as well as a flared end, which stops the strap pulling out when it’s undone.

The cuff is tightened easily using a ‘Boa’ fastner – this is a rotating disc that winds a coated steel thread, pulling the two sides evenly around your wrist. This system allows for large areas of armour to be used, and while I was wary that it might be a weak point, it’s never caused me any problems. With the disc raised, the gloves are free to open fully, then press it down and wind it – it takes just two full turns to go from fully open to fully tight.

The outside edge of the first finger – down to the wrist – is protected by an extra roll of leather, while the outside edge of the little finger is double-layered; it’s an impressive construction that, combined with the well-positioned stretch panels, justifies the relatively premium price. 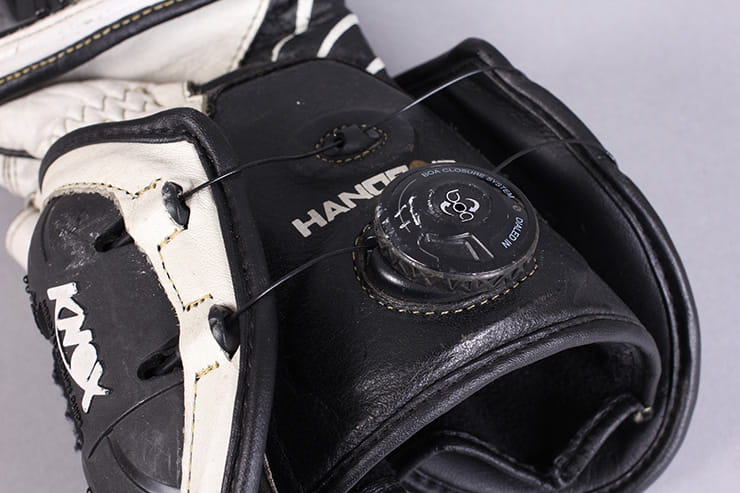 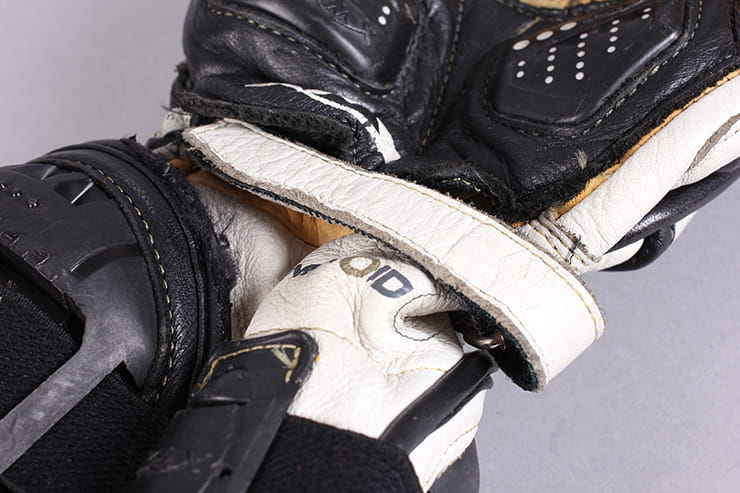 The lining is soft and comfortable– it doesn’t give the sweaty feel that some linings can, and is in place over the entire glove, except the palm. I’ve seen no fraying inside them; beside the grubby look of them after many miles, the only real sign of wear is where the Velcro on one glove’s wrist fastener has pulled away from the stitching a touch. It doesn’t interfere with the performance, and I just stuck it back down with a little flexible glue.

The Knox Handroids are a premium race glove – I’ve used them on a variety of bikes, though of course they can look a bit high-tech on street machines with a leather jacket and jeans. My concern was one that came up while riding a Fireblade at Portimão, in that the brake lever can be fouled in some situations, but adjusting it (if you can) should eliminate this.

If you get caught out in the wet when riding, don’t put your gloves on the radiator. Forcing leather to dry too quickly drives out the natural moisture that keeps it supple. As bike kit is made of chrome-tanned leather, you also shouldn’t be trying to oil it. For more info, read our article on caring for motorcycle leather kit here.