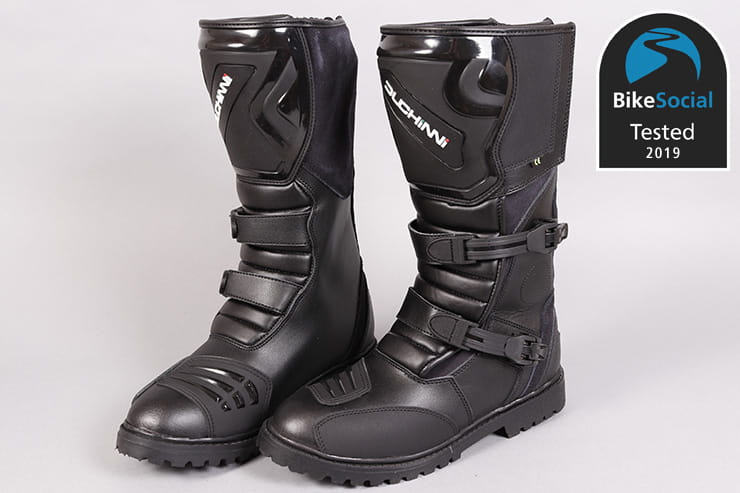 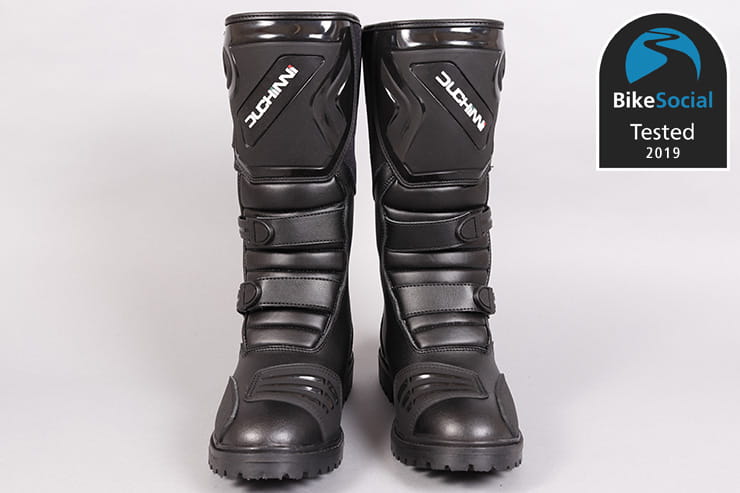 I have a 50 mile commute with no option to use a car, so I ride all year round no matter what the weather’s doing. It’s really important that the kit I wear is comfortable, protects me from the weather and protects me from injury should the worst happen.

My daily ride takes in the full spectrum, from twisty country roads, through traffic-jammed trunk roads, dual carriageways and urban areas to longer rides into the Peak District or Wales at the weekend. My trusty steeds are ‘Kaley’; a battered 2012 Kawasaki Versys 650 I occasionally use for green-laning, and ‘Bertha’; a 2009 Suzuki Burgman 650 (I’ve also temporarily got the use of a Honda CB500X while Bertha is being repaired after being T-Boned in Lichfield).

So far I’ve covered around 2,000 miles in the Duchinni Quest motorcycle boots on review here, in a range of weather – chilly, warm and very, very wet… 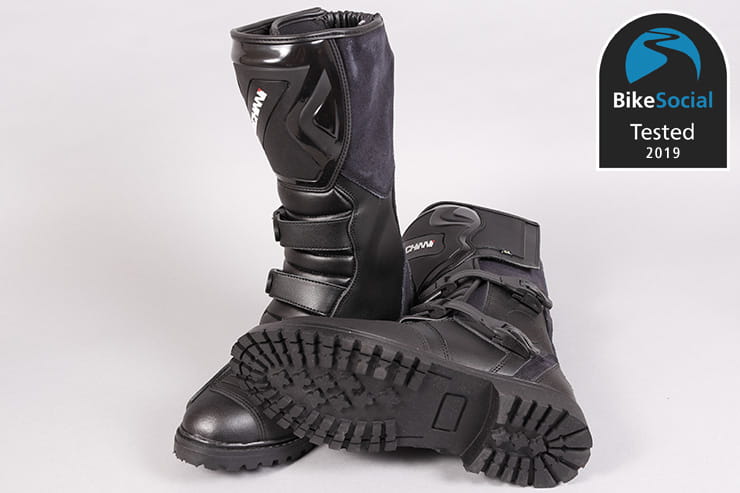 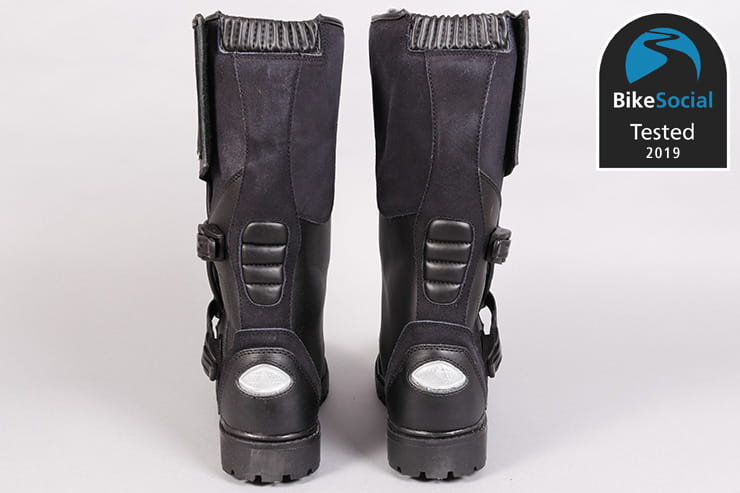 The Duchinni Quests are a tall adventure -style touring boot that come to just below my knees. They have a full grain black leather upper with a suede calf section to give a great balance of flexibility, protection and comfort. The leather is supple with a good degree of flex, aided by the ribbed shin.

Protection comes in the form of an armoured heel, shin and toe, with a double-layered ‘slide panel’ on the outside edge Inside the boot the lining feels quite thin on the sides and calf ,however it’s very plush on the shin. The insole is quite supportive too, meaning the boot is very comfortable on long stints in the saddle. The inside of the boot is a cosy place to keep your foot!

The boot’s design is quite understated, which I like. I’m not much into the ‘power ranger’ look, and don’t need my boots to have a weathered look as I wear them enough to achieve that on my own. This is a good old fashioned plain black boot, with the token nod to safety being a reflective panel on the heel. 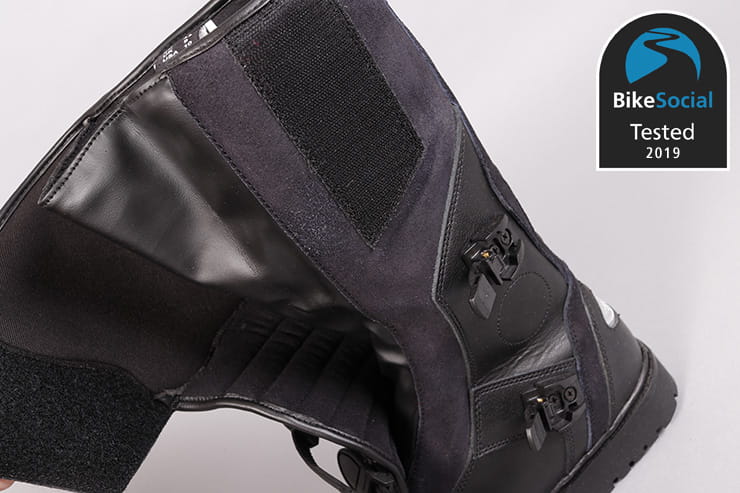 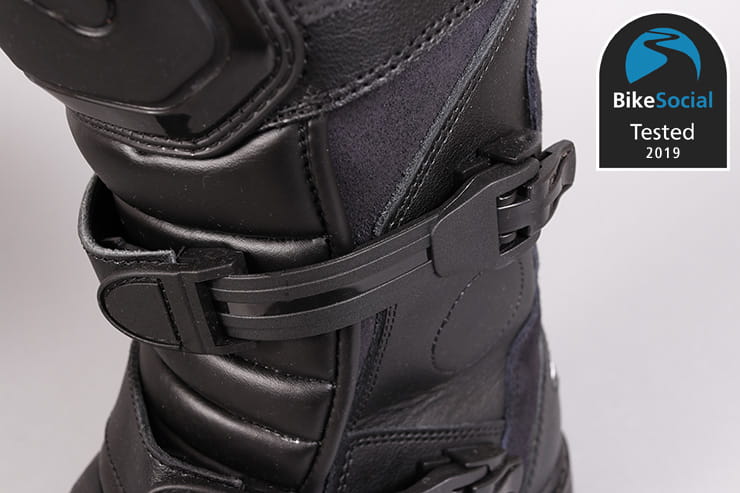 Fastening is via a large Velcro closure at the top, wrapping around your shin toward the calf and incorporating the shin armour. The Velcro is high quality and needs a fair tug to get it open; no danger of the boot slowly coming undone as has happened on a couple of my previous boots!

There are also two ice hockey-style ratchet buckles, which have a good design. You set the length, hook the end over a lever and it tightens as you push the lever down. Unlike other boots that need to be reset every time you put them on, the ratchet ‘remembers’ your setting. 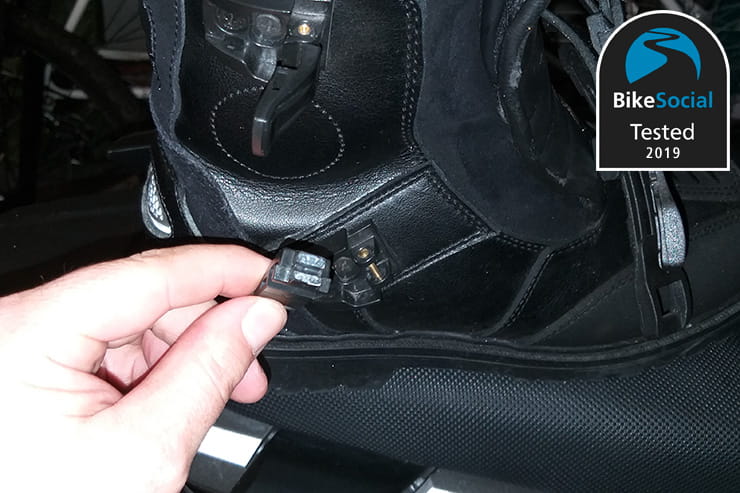 Unfortunately I’ve had one of the buckles fail after only a couple of weeks and 1,000 miles. I prefer the ratchets to be slightly loose, relying on the Velcro fastening for a snug fit, but even though the buckle wasn’t jammed and I put no pressure on it, it snapped and the whole thing fell apart in my hands. The safety of the boot isn’t compromised, but I wouldn’t have expected a buckle to fail so early in its life. A shame as the rest of the boot is a solid bit of kit, but after contacting Fowlers, they very quickly sent out some spare parts, so problem solved. 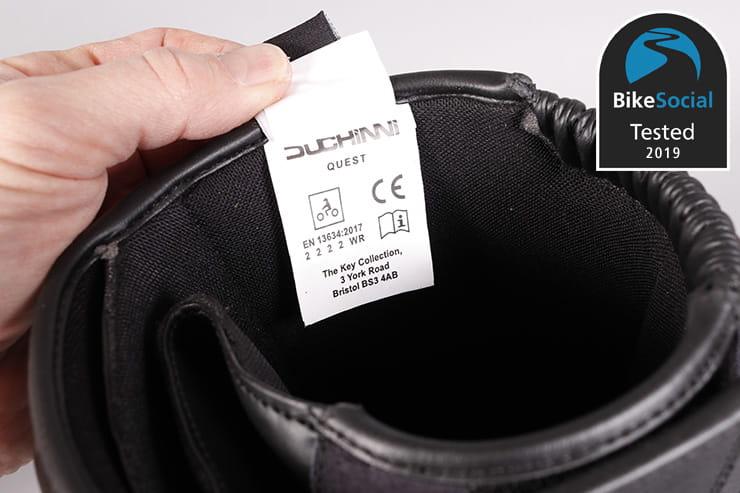 The Ducchini Quests are CE certified to the current boot regulation EN13634:2017, meaning they should protect your feet from abrasion during a slide, and have a crush-resistant sole, which is important if your foot gets caught under the bike. They’re also CE-certified as water-resistant.

On the bike, the Quests are remarkably comfortable. The CB500X I’m borrowing has a gear shift that my ankle disagrees with – essentially shifting up requires a level of pivot I don’t have anymore, so have to lift my foot rather than flick up. The linkage is unnecessarily complicated, and as the bike isn’t mine I don’t want to take it apart to adjust it. My usual boots – work issued for use in cold and wet weather – made my shins ache something chronic, but the Ducchinis never gave me any trouble at all, such is the suppleness and flexibility in the leather upper.

I recently had a 400 mile ride on the Versys and my feet were as cosy at the end of the journey as they were at the start, which is a great endorsement of their design as a touring boot. In the chilly early mornings they kept my feet warm, and when the weather was hotter my feet were comfy and never clammy. Full marks.

However ,it isn’t all good news. As comfy as they are on the bike, they leave a bit to be desired off it. Maybe I’ve been spoiled – my usual boots are the sort that you can walk 20 miles up and down hills in, though to be fair they aren’t motorbike boots. Don’t get me wrong, a quick browse through the special buys at Aldi, or a selfie at a beauty spot is fine, and for many that’s enough. But any longer walks than that are uncomfortable thanks to where the armoured heel meets the suede calf digging into your foot. After a day walking around Silverstone at a BSB test day I was beginning to wish I’d packed some trainers.

The sole is impressive and well made; thick with a deep and rugged tread, they look like they’ve been borrowed from a pair of Doc Martens, and add to the adventure boot theme. I have no doubt they’ll last a long time, tarmac dragging not withstanding. They give excellent grip on loose surfaces like gravel, though are a bit slippery on smooth wet surfaces like petrol station forecourts. It’s OK, nobody saw. 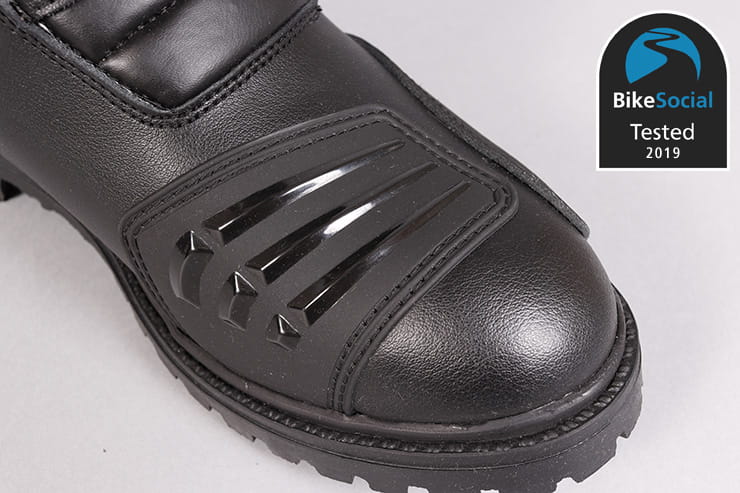 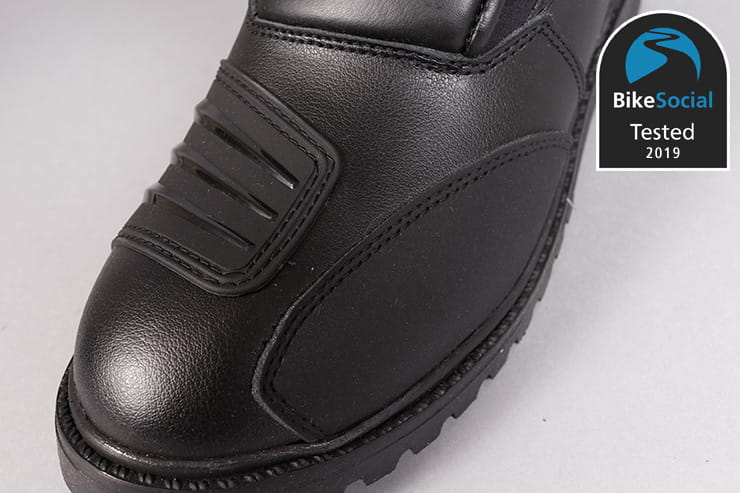 For the most part the Hipora lining does its job and keeps the boots watertight. I’ve ridden a fair distance in moderate rain and my feet remained dry, both in terms of water ingress and clammy feet. However yesterday I rode through a protracted burst of heavy rain; the type where you wish that you’d applied Rain X to the inside as well as the outside of your visor. Toward the end of my hour’s ride my feet were soaked, to the point I could wring my socks out and needed to pack the boots with newspaper to dry them out. But though wet, my feet were never cold or uncomfortable.

On balance I feel the boots perform well, keeping your feet dry in 99% of what we all ride in, the 1% where they leaked was admittedly torrential. In other scenarios I probably would have sought shelter so the boots would have stayed dry, though other (more expensive) boots have stayed dry in similar conditions.

A lot of adventure boots feel like something Neil Armstrong would have worn when he stepped onto the moon; heavy and rigid. For a boot as rugged and substantial as the Quests, they’re surprisingly light – maybe half the weight of my regular (non biking) boots. But this doesn’t detract from their quality feel, or the reassurance that they’ll protect you in the event of a fall.

Despite their minor flaws, I really like the Duchinni Quest boots. For the vast majority of riding they tick all the boxes: comfy when it’s cold, comfy when it’s warm, comfy for all day in the saddle, comfy enough for walking around the shops, dry in the some of the wet, rugged yet flexible. They only failed in the most horrid of conditions, and while I’m a little disappointed one of the buckles failed so quickly in normal use, the issue was sorted quickly by Fowlers.

Facing some stiff competition from the likes of the much more expensive TCX Drifters, and Falco Mixto 2s, the Duchinnis perform well given their price.