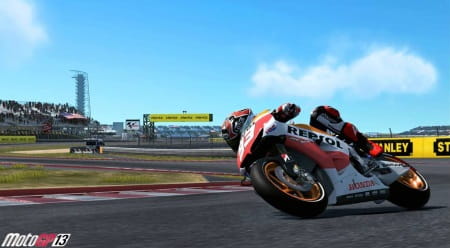 Many racing game fans were left disappointed with the last version of MotoGP’s official video game as it was too focused on an arcade mode with little realistic simulation. So when it was announced that Italian company, Milestone were to produce the 2013 version they were faced with quite the task.

What Milestone had in their favour was they have been the producer of the SBK video games for many years – games which have been praised for the realism of the simulation modes. If Milestone were to base the 2013 GP game on recent versions of the SBK game, it should be pretty good. And it is. In fact, in many ways MotoGP ’13 is better than the SBK games.

MotoGP ’13 is one of the most realistic motorcycle simulation games we’ve ever played. For perhaps the first time in a motorcycle game, when using full simulation the realism is almost perfect; if you go too far over a bumpy curb – you low side; if you open the throttle too much, the rear spins round on you and throws you out of the seat in a realistic fashion rather than what had become the typical, melodramatic motorcycle game high side. They’ve paid real attention to the different characteristics of different bikes too, for example in Moto3 as we know the Honda powered machines are at a significant straight line speed disadvantage to the KTM powered machines, this is reflected in game very well. They’ve even paid more attention to detail; in MotoGP mode the Yamaha is smooth, the Honda is aggressive and sharp and the Ducati is, well, a bit wild and harder to control.

For those who wish to play without simulation, the settings can be dampened to a standard, assisted-riding option. The good thing about this game is there is a happy medium for those who don’t quite have the experience with racing games to play full simulation but don’t want the mollycoddling of no simulation at all. This can also be customised further to make the perfect simulation setting for you – excellent for learning! The differences between Moto3, Moto2 and MotoGP are also good for learning how to ride the bikes in game, naturally the Moto3 machines being the easiest to ride and the GP machines being the hardest with Moto2 a good middle ground.

There are two issues with this game. The first is that there is no ‘Time Trial’ mode; if you just want to spend a bit of time improving your riding you have to use the practice sessions of a Grand Prix. This is all well and good, however on other racing games Time Trial modes store previous lap times so you can return and attempt to beat your previous times rather than just starting a new practice session each time. The other is the multiplayer split-screen mode appears to be a bit of an afterthought. While the graphics on the game are generally excellent, in split-screen mode they are of slightly worse quality and what’s more is in each race there are only 6 riders. It would seem some corners have been cut in the development of MotoGP ’13 but in general it’s such an improvement on the last version and definitely worth a buy.