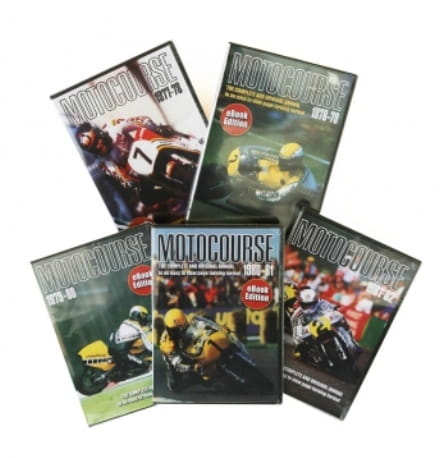 For those of us who worship at the altar of bike racing, Motocourse is our bible.

Introduced in those days before the internet and satellite TV, the first edition documented the 1976 Grand Prix season and became an instant classic.

This hardback tome has been published every year since, written and edited by the sport’s finest scribblers, all illustrated by the year’s best photography and accompanied with the most comprehensive results.

My personal collection of Motocourses' (Motocourse-i?) dates back to the early 80s, but finding those earliest editions requires much patience and money, with prices counted in hundreds rather than tens of pounds.

And I don’t really quite know what to make of them. I love Motocourse, I really do. As a teenager they took me to places I thought I’d never go. As a cub reporter they became my reference for great motojournalism and today they continue to captivate and entertain me. It still remains one of my unachieved ambitions to actually contribute to this mighty tome. And to edit it? Well that remains the ultimate dream for any racing journalist.

Having taken delivery of five discs documenting the seasons from 1977 through to 1981 inclusive, my inner geek is beside itself as we discover the journeys legends like Kenny Roberts and Barry Sheene took to their championship victories. We revel in reading all about the ‘state of the art’ bikes they rode and mourn the passing of those who made the ultimate sacrifice. We even learned about forgotten heroes like 1977 250 world champion Mario Lega and enjoyed a few paragraphs on a young upstart named Steve Parrish, before he became that bloke off the telly.

It’s great stuff, but I’m not sure it’s for everyone. There’s something just so moorish about picking up an old Motocourse and there ain’t no CD in the world that can replicate that kind of feeling. As an eBook, it’s also somewhat clumsy. The layout is exactly the same as the original books, which is obviously dated, and I’m not convinced that I really want to sit and enjoy reading a ‘book’ upon the device upon which I type these words.

Don’t get me wrong, I am no technophobe. I love reading on my iPad, but Macs and PCs just lack the portability and flickywooshiness of a tablet, and the interface on these Motocourse books does nothing to change that.

That said. If, like me, you can derive hours of pleasure looking through an old Yamaha microfiche, the digital Motocourses will be right up your street. As a journalist, these annuals are vital reference tools. For that purpose, digital wins every time thanks to the inbuilt search function. But with a cuppa, Hob Nobs and a few hours to kill, I’m old school every time.

For some, these digital Motocourses will be a welcome addition, but I just can’t help but feel a little disappointed. They are, of course, a superb example of contemporary journalism, photography and editing – the very best – but there is just a massive disconnect between 70s book design and what one expects from a modern eBook.

And then there’s the price. In a society where paying a fiver to download an eBook is baulked at, getting off your bum to spend £19.99 for a book on a CD feels a touch salty. My five pack came at a discounted £80 for the lot, but even at that, I think you’ll have to be a real geek like me to spend that kind of money to read about the old days.