By Test Team
The BikeSocial TestTeam is made up of trusted motorcyclists from around the UK who have proven they can thoroughly review the bike kit that really matters. If you'd like the chance to be one of them, send a thorough review of an item you own that suits the rigorous BikeSocial testing standard and style, along with high-quality images to enquiries@bikesocial.co.uk 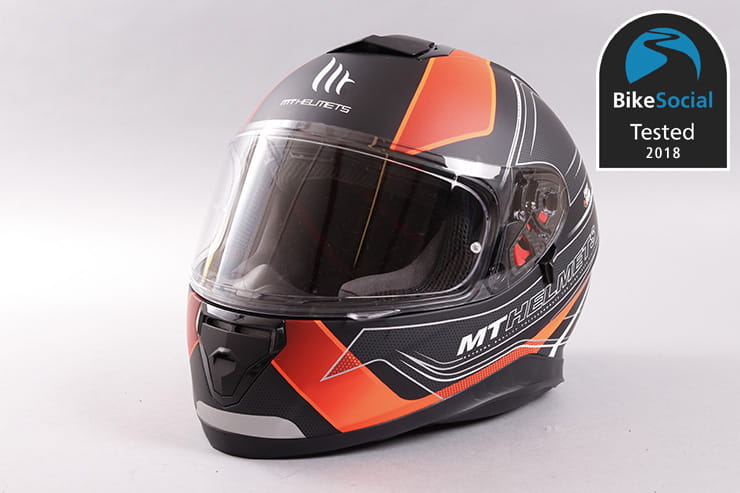 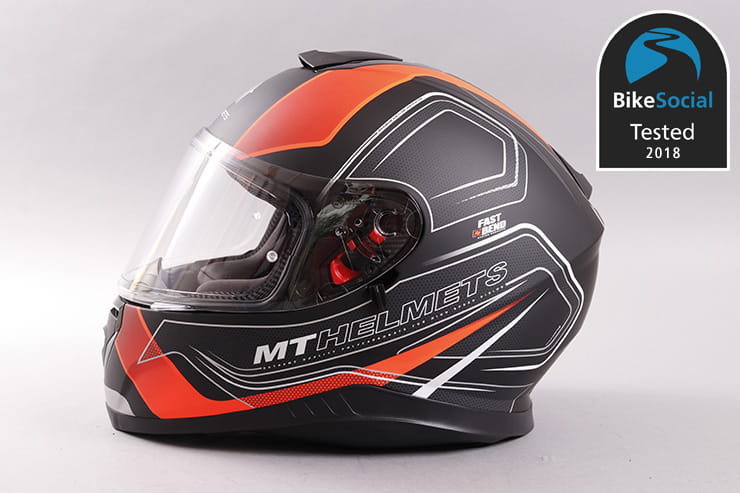 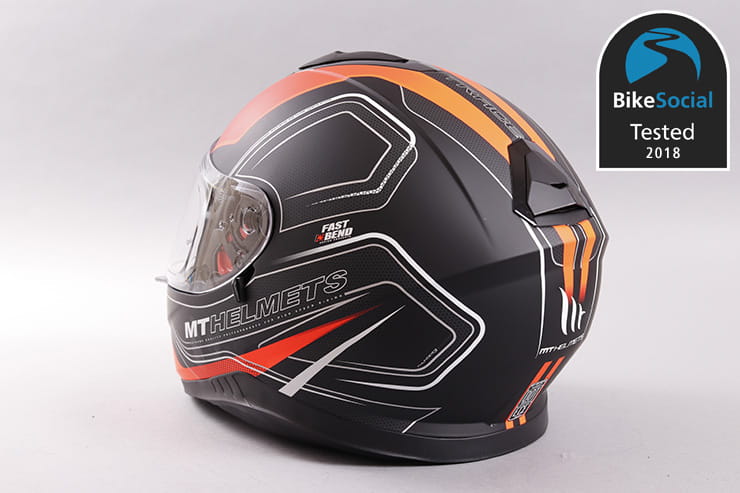 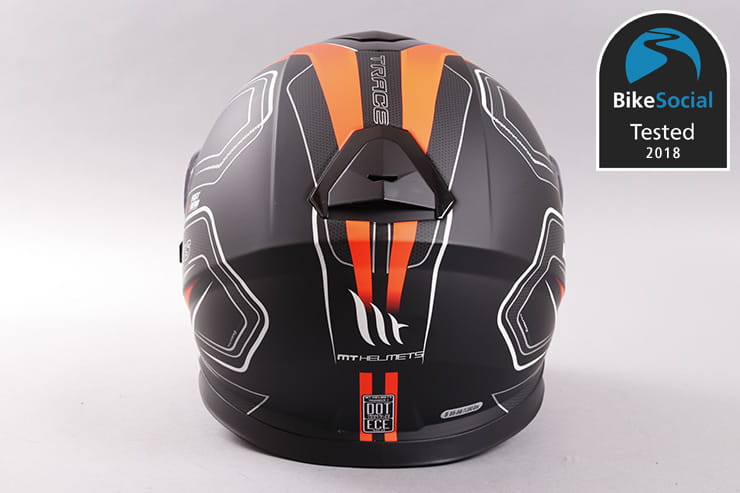 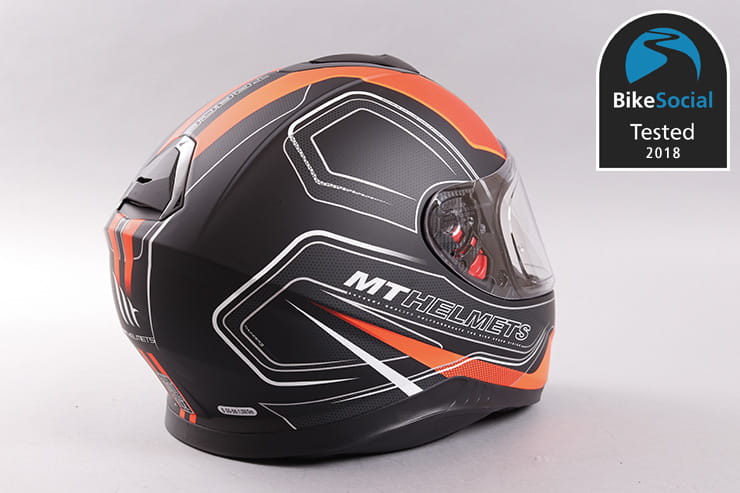 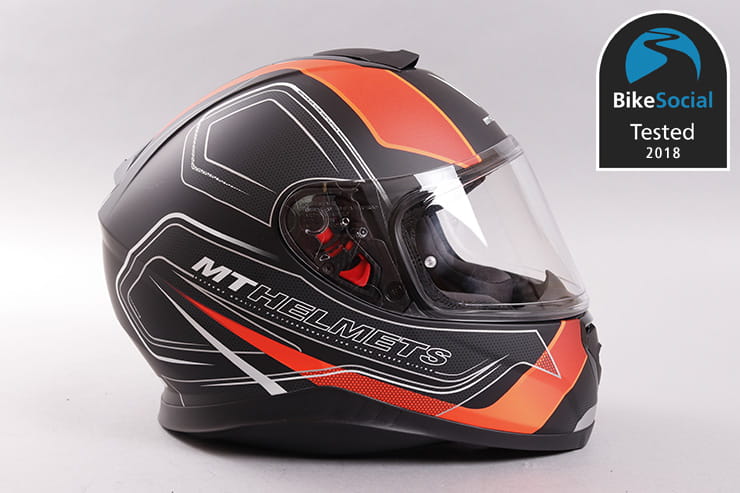 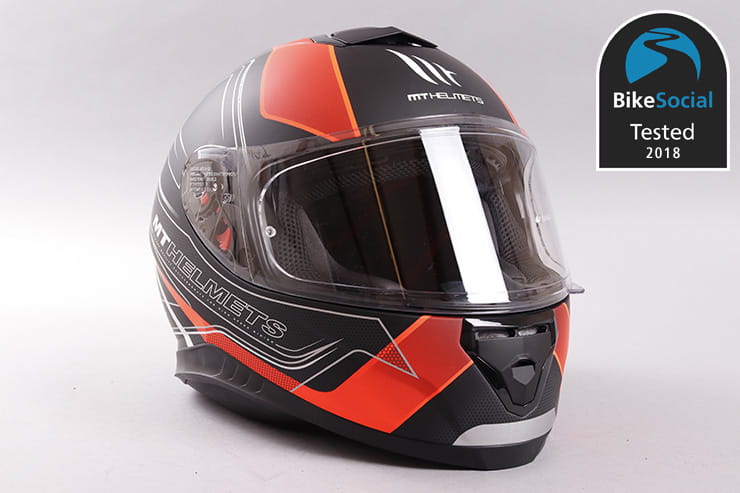 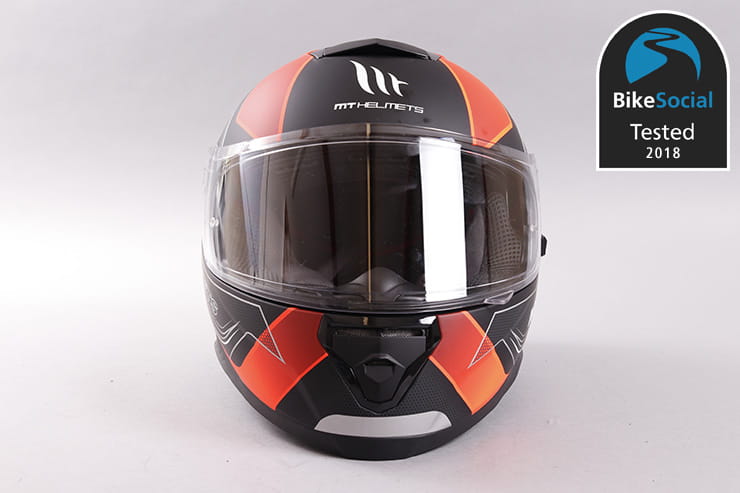 With prices starting at £79.99 for plain colours, and rising to £89.99 and £99.99 for graphics (along with a silver one for £119.99), the MT Thunder 3 is a relatively affordable full-face helmet. BikeSocial Test Team member Andrew Wolfe has been wearing one for two months on his Yamaha MT-07…

Tested in the ‘Trace’ matt black and fluoro orange colour scheme, the polycarbonate-shelled Thunder 3 is typical MT, with sharp graphics and an overall quality feel that belies its actual price.

At 1543g for this small model, the MT is a fairly average weight, and won’t give any undue neck strain. 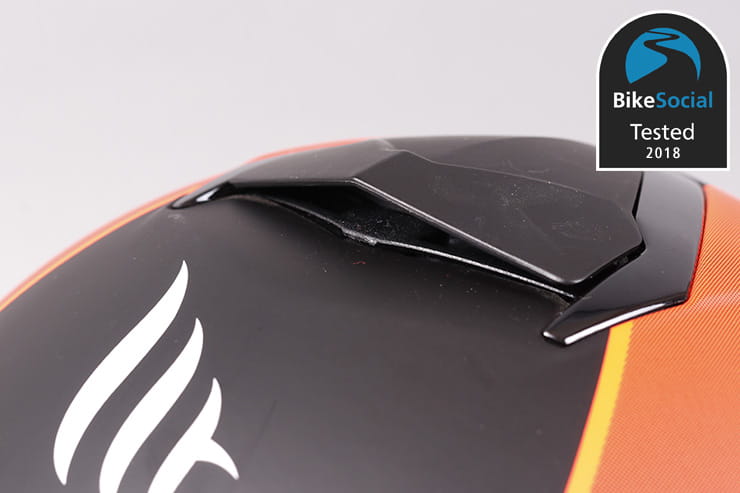 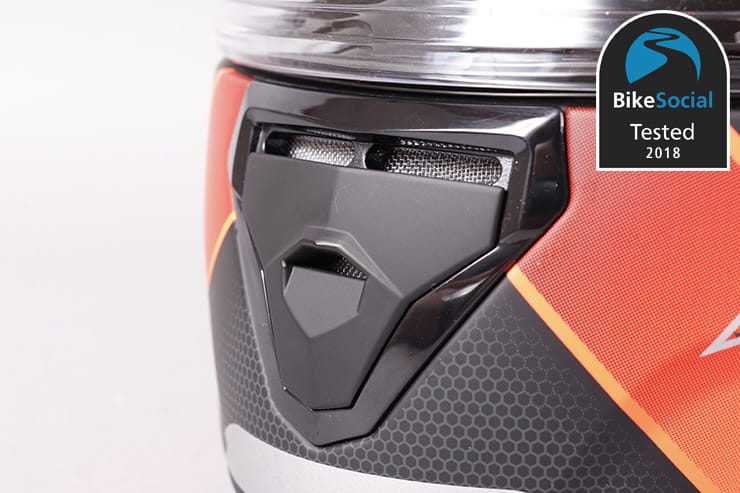 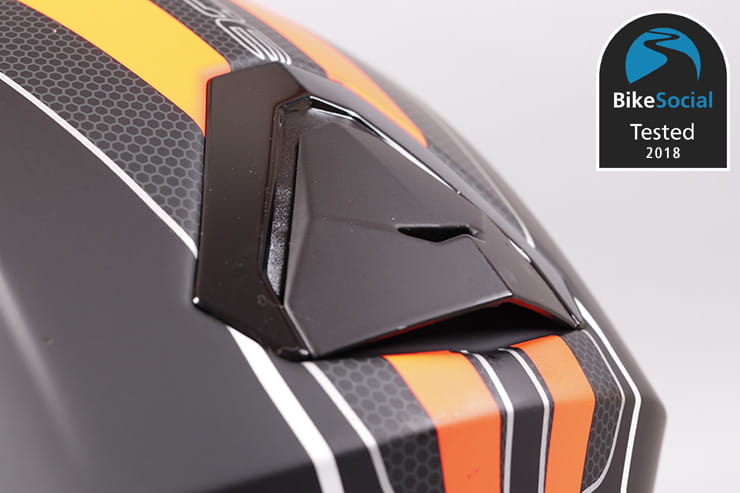 This helmet has three externally operable sliding vents; one at the chin, one directly at the top of the head, and one exhaust port towards the rear. These are all quite large compared to other helmets I’ve used, protruding enough to make them very easy to locate and operate on the move in both summer and winter gloves. Despite the size of the vent sliders, the actual vent apertures themselves are no larger than generally expected.

In my experience, it’s unusual to be able to close the rear exhaust port, and somewhat unnecessary regardless of how cold the temperature gets. It’s not a feature I’ve had on previous helmets and to be honest, I wouldn’t be bothered if my future helmets didn’t have this as I personally opt to leave it open all the time.

Open space around the mouth is somewhat reduced in this helmet because of the thick cheek padding. The chin vent doesn’t direct any airflow towards the mouth, instead aiming it all at the visor, which helps to keep the visor fog-free.

Overall, the ventilation is basic but does the job adequately enough and I personally wouldn’t expect more at this price point. In warm conditions it’s just about enough to keep heat down to a comfortable level, and shouldn’t be too chilly if used in the winter. 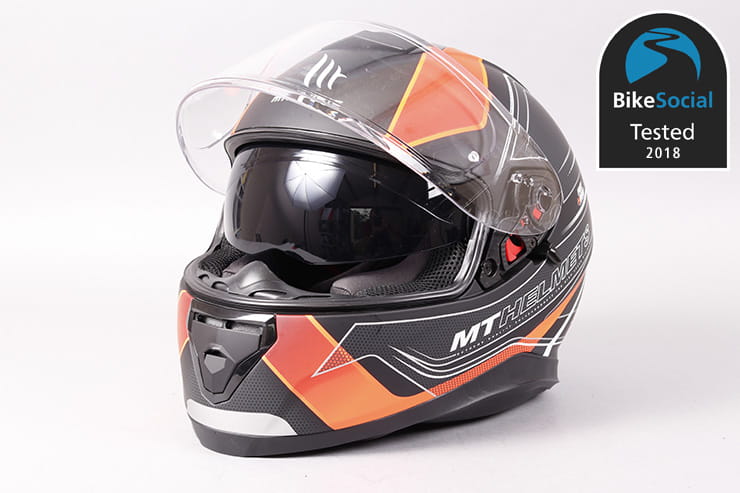 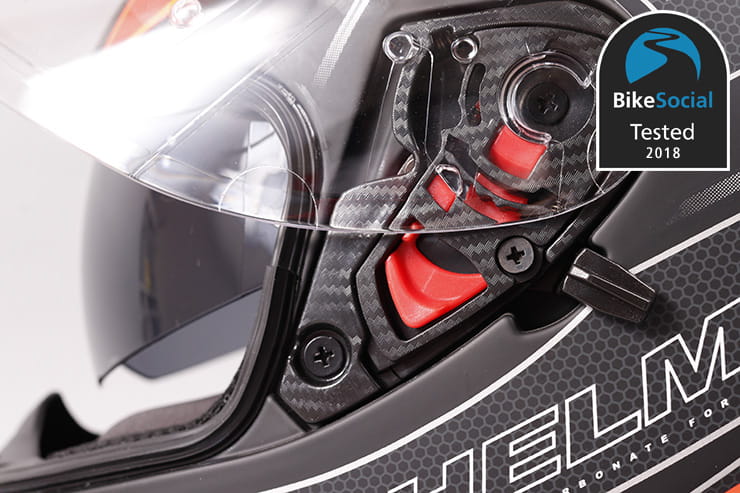 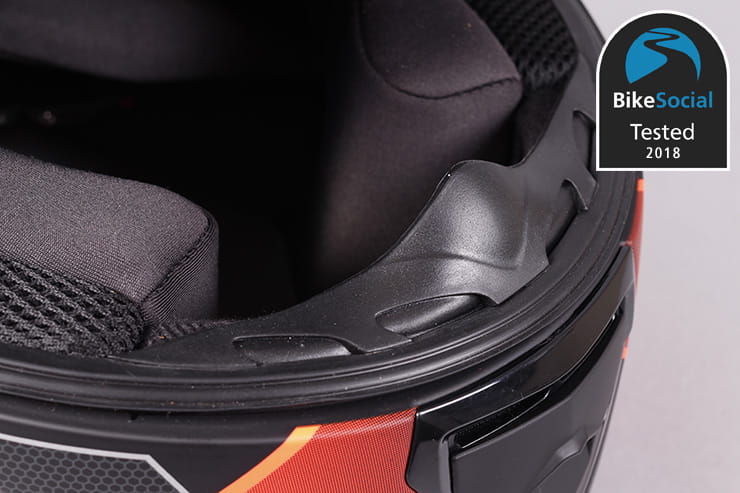 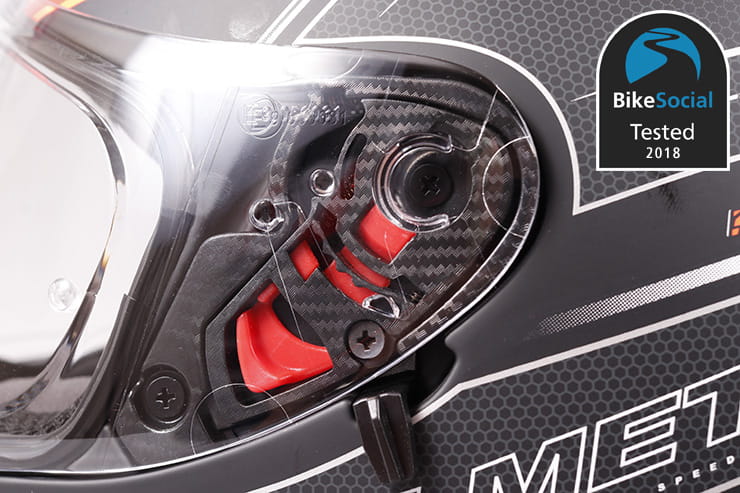 The visor opens easily from a tab on the left-hand side, which is plenty big enough to locate in both summer and winter gloves; I’ve always preferred centrally located opening tabs so that I can open the visor with my right hand while stopped with my clutch depressed with my left.

Unfortunately, the visor doesn’t open fully, leaving about 20mm still in view; slightly annoying at low car park speeds but I soon found myself forgetting about this.

The visor mechanism doesn’t make for speedy removable, being quite stiff and not the easiest to grip onto, but with some practice it gets easier and seems to loosen up some.

In heavy rain, the visor seals out the water well.

The visor operates on a smooth, four-position ratchet, with friction allowing you to crack it just open for increased ventilation – I experienced no problems with the visor unwantedly opening wider or closing when cracked open, and was happy with the pre-set positions, allowing sufficient airflow while still protecting the eyes from wind at lower speeds.

The size of the aperture in this helmet seems relatively small in height and width; when changing lanes on the motorway for example, I found myself leaning out when turning my head over my shoulder to cover blind spots with the more limited peripheral vision.

The view through the visor itself also has a slightly odd feel to it, which I put down the internal perimeter ridge for the optional Pinlock MaxVision anti-fog insert – try one, and it might not bother you.

The operation of the sunshield is good, via a small tab under the left visor mechanism. Despite its discrete size, it operates smoothly and effortlessly enough for a budget helmet, in both summer and winter gloves. I found this arrangement is much better than a slider right on the top of the head, and didn’t experience any problems with the sunshield touching my nose, however there wasn’t a great deal of clearance so again I’d strongly recommend trying this helmet for fit before purchasing. The level of tint is plenty adequate for those sunny days, and I didn’t find any problems with the sunshield not dropping enough as to allow sunlight in around the sides and bottom. 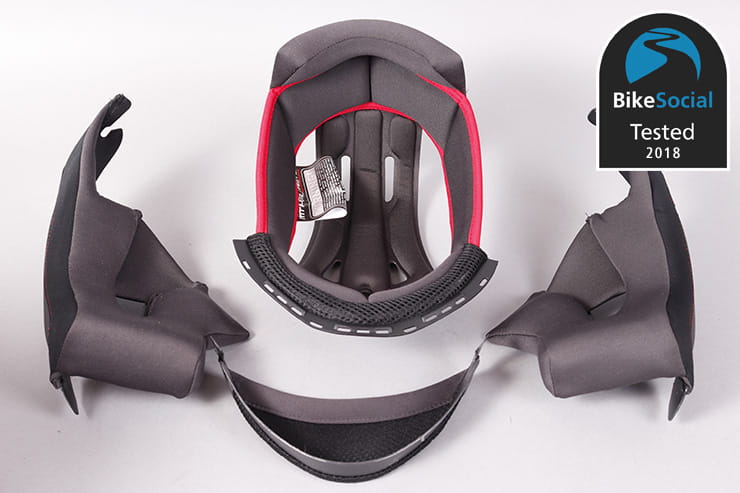 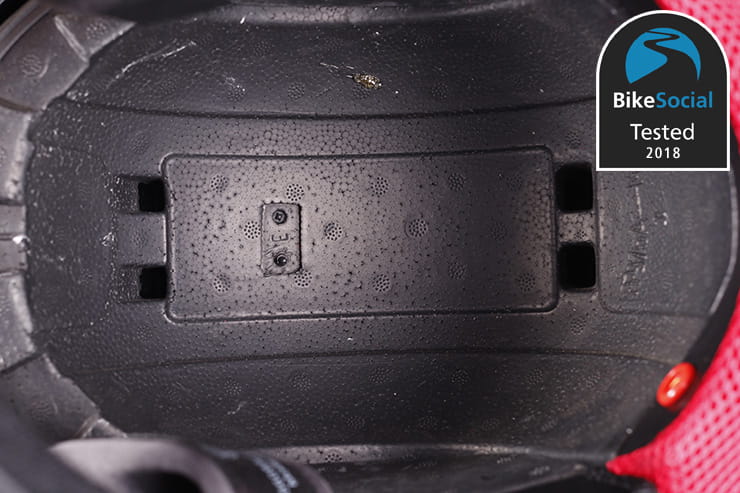 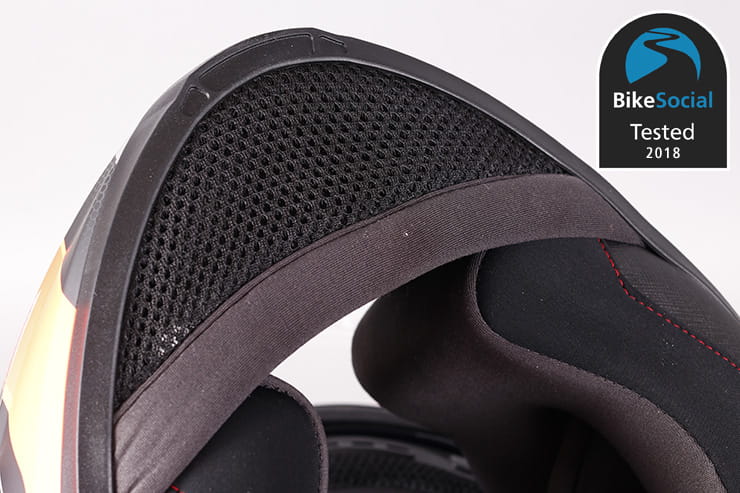 The interior lining is easy to remove for cleaning, although it’s a little more fiddly getting it back in around the bottom rubber. Still, this is usually the case with most helmets I’ve used, and I can’t complain given the rarity of performing this task. 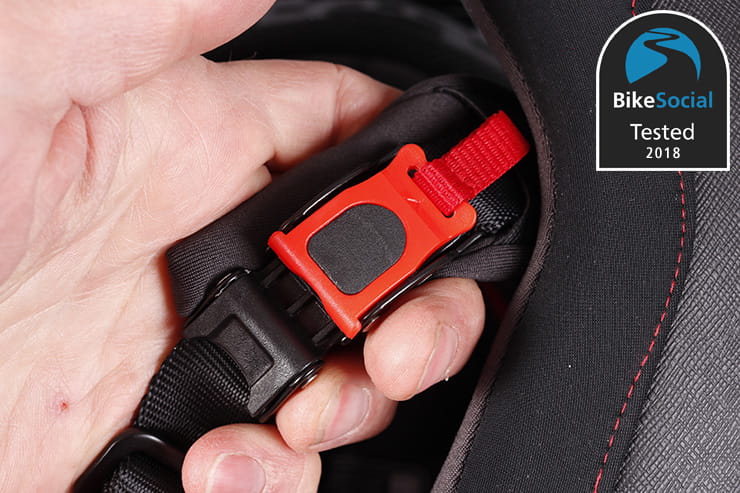 The MT Thunder 3 is fitted with a micrometric ratchet strap fastener, which is easy enough to operate in gloves; much quicker than a double-D buckle but there might be a requirement for periodic strap adjustment, as they can loosen a little over time with use. Another plus point is that you won’t have excess strap to secure out of the way each time you put this helmet on.

Padding is plentiful, tight and high around the cheeks, I’d strongly recommend trying this helmet on before buying, to ensure it suits your head shape. I personally found that my cheeks were pushed in to an extent that I would always have my mouth slightly open to reduce the pressure. Otherwise, it’s comfortable and will suit many head shapes fine.

I have no problems getting the helmet on and off, and the aperture is large enough that nothing catches or scrape on my face.

The chin curtain is quite large and sits closer to the neck than some helmets, making it more noticeable. It’s made of a light, open-mesh fabric, which helps with ventilation.

I don’t wear spectacles, so for the purposes of this test I borrowed a pair to try for fit while stationary. The MT makes no special provisions for those that wear glasses, but considering how tight the padding is around the cheeks I found them relatively easy to put on. My only complaint would be that the frames were forced to sit slightly proud above my ears, rather than on them, but this didn’t seem to affect placement over the nose too much. Again – always try for yourself to be sure as we’re all different.

While on the move at speed in this helmet, brief whistling noises – generally lasting milliseconds – do occur from time to time. These could result from various factors such as head direction, wind direction/speed, vent positions etc, and it was difficult to pinpoint exact causes because of their irregularity and rare occurrence.

The only noise this helmet would persistently make is gusting wind around the top vent when both open and closed while tilting my head forward, which doesn’t occur often in my normal riding position. Overall this helmet is quiet enough, and I personally found no requirement for earplugs; I’ve always ridden without earplugs anyway and this lid didn’t change that.

I honestly expected this to be a fairly cheap and nasty helmet, especially given the inclusion of a sunshield at this price, but I found myself pleasantly surprised.

In my opinion, there are a few features that could be improved, namely visibility and the visor mechanism, but on the whole you really can’t complain given the price.

Although not best suited to my head shape with the paddling around the cheeks, I’d be happy to recommend this helmet for a daily commute if on a budget – like any lid, just try it on first. You won’t find yourself spending extra on a tinted visor with the very user-friendly sunshield and ventilation should be adequate for use all year round.