The genuine carbon-fibre is what sets this lid apart. With a multi-composite fibre shell it costs just £139.99, so you’re of course paying a premium for the style and weight saving, but the finish is very good, with subtle black branding. 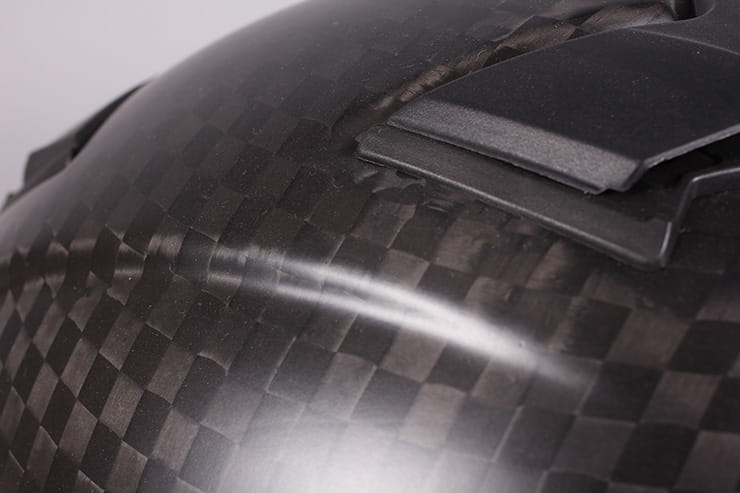 At 1358g for the medium-sized lid I have on test, it’s very light compared to an Arai Quatum ST at 1646g, but not quite as light as Shark’s featherweight carbon-fibre Spartan, at 1332g. 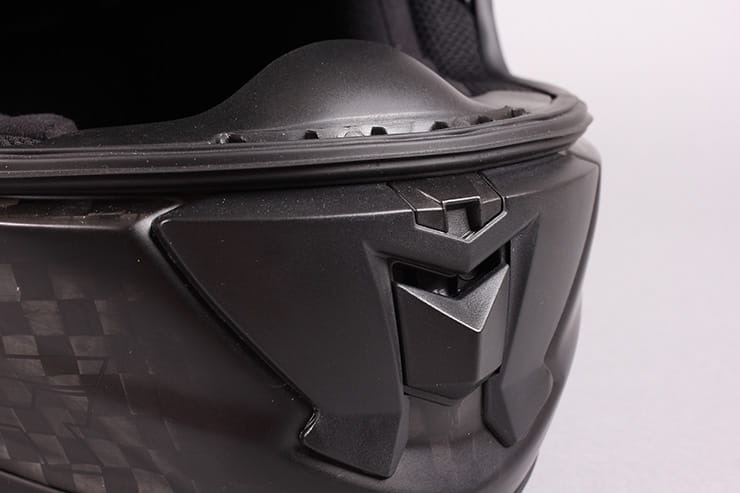 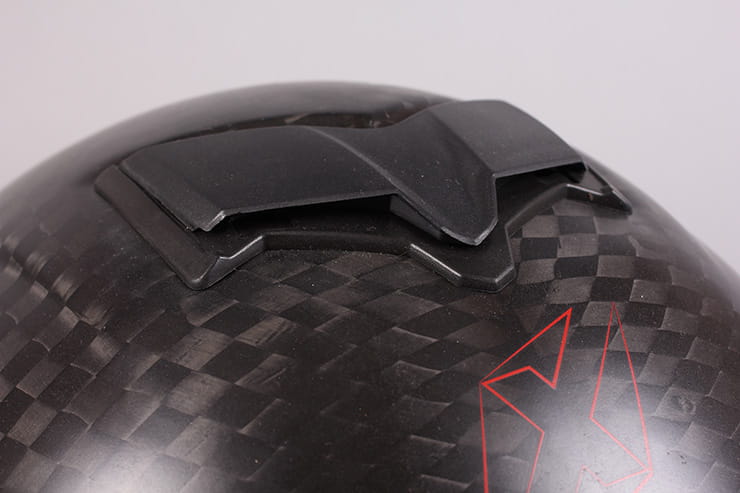 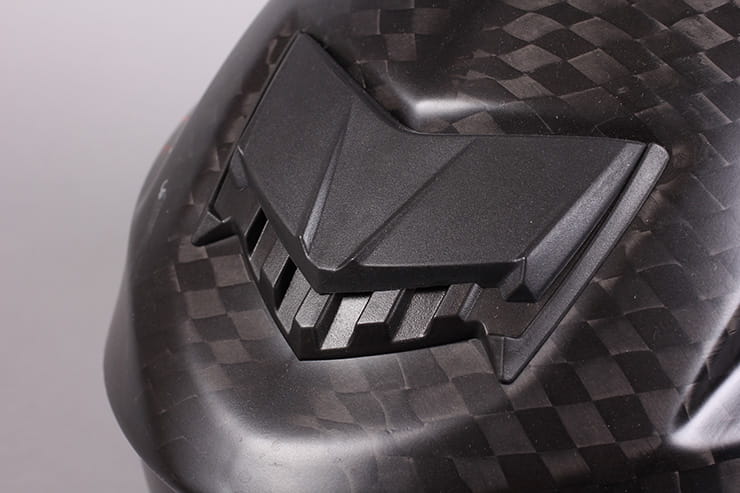 This is quite an airy-feeling lid, even with the chin skirt, but the vents aren’t particularly powerful – on an unfaired Suzuki GSX-S750 I struggled to feel the difference between open and closed.

The top vent and exhaust have three positions, including open and closed, while the chin has two. The visor is very easy to crack open just slightly, which tends to be unusual on a ratchet-type mechanism – it’s an excellent feature that makes city riding much easier thanks to the improved airflow. 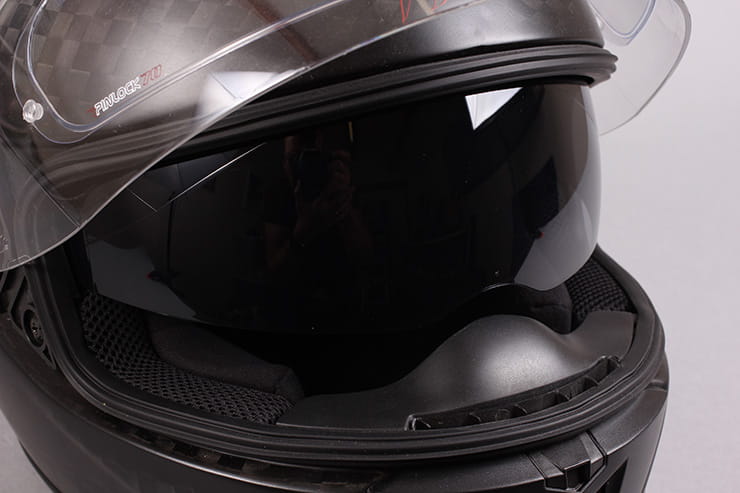 A Pinlock insert is supplied for fog-free riding, and as the mechanism allows you to crack it open a touch, if you wear glasses then fogging still isn’t much of a problem. As it’s not a ‘Max Vision’ Pinlock, which has increased coverage, you might find that if you’re laying across the tank in a racing tuck, the top edge of the insert can restrict your vision slightly. For normal riding, it’s really no problem at all.

On my KTM 1050 Adventure, which suffers from buffeting due to the standard screen’s design, the visor tends to rattle sometimes if left open at speed – this could be an issue if you ride with it up, behind a large touring screen.

The visor stays in position without any problems, but to fully lock it you need to press on the top edge, rather than the central thumb catch. Being in the middle, it’s easier to reach with either hand than a helmet with its catch on the left side only. Regardless of whether the visor’s fully locked down, or just pushed shut, it seals well, preventing any water from running in along the top edge.

A drop-down sun-shield is operated by a lever on the left, and doesn’t press on my nose, though as with most of these dark inserts, I find the gap left below it rather distracting, and it can interfere with my view of the mirrors. Still, it’s very useful if you get caught out by some bright sunlight. 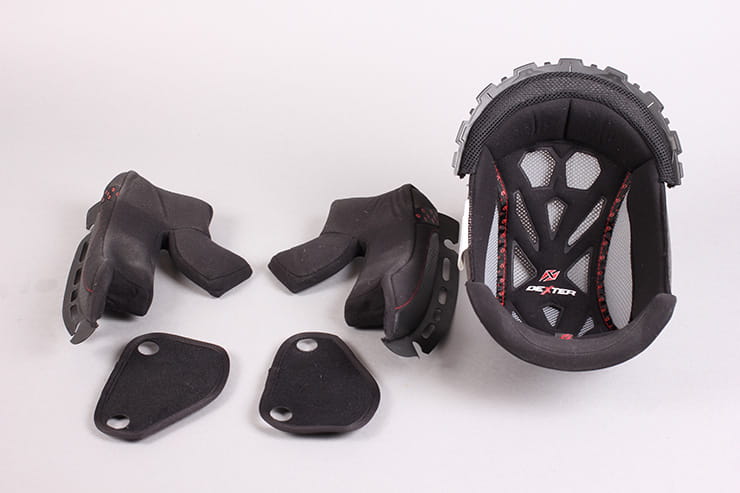 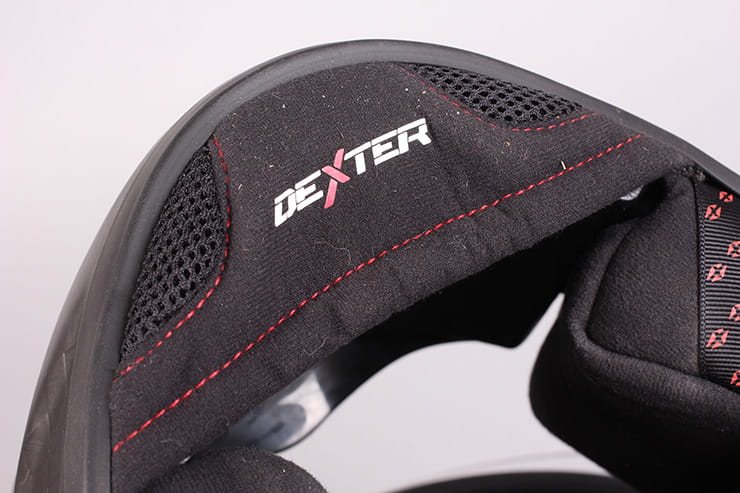 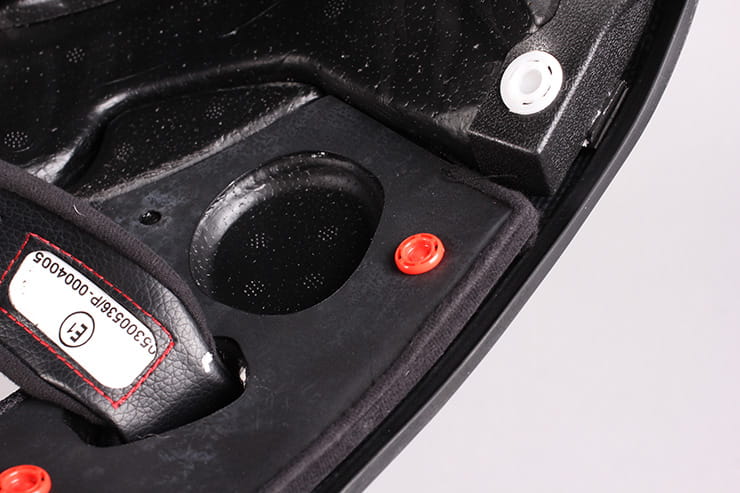 The lining is soft and fully removable, so easy to keep clean. While they’re not labelled as such for the emergency services, the cheek pads have small loops that make them easy to pull, reducing the strain on your neck when removing the lid in an accident. 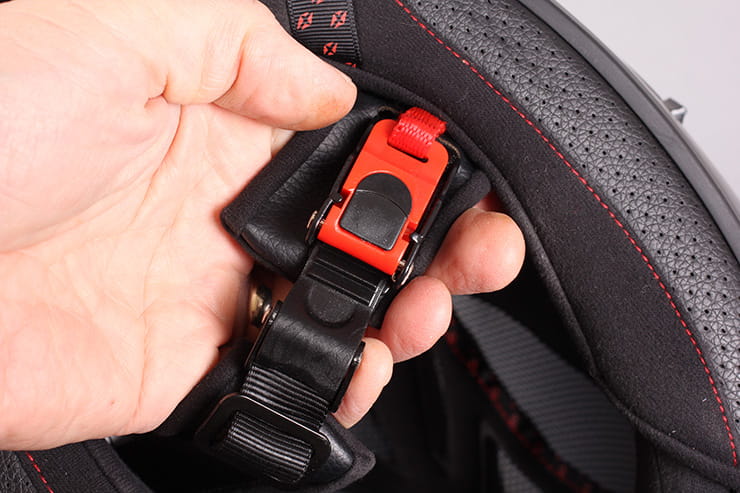 The Nucleon has a ratchet-type strap – it’s an easy-to-use system with a long fabric tag that you can operate with you gloves on.

Fit is of course very subjective – it’s important to try on any helmet before you buy, but as the Dexter is imported exclusively by SportsBikeShop, you can easily return it if you’re unable to get to the Lincolnshire store.

I found the forehead to be rather tight, which can get uncomfortable, but this is an issue I have with some other lids too – try it for yourself and it may well be perfect.

Speaker cutaways are concealed inside the lid for a comfortable fit if using an intercom.

I’ve yet to find any helmet that’s quiet enough to not need earplugs, and this is no different. It’s far from the noisiest I’ve tried, but there does seem to be a bit more air whipping around my ears than some others.

The additional price of the carbon-fibre puts this at the top end of the budget-priced lids to one that nudges towards the midrange. While it does have some good features, it feels a relatively cheap lid. Which of course, it still is – if the you like the look, and it fits, the Dexter is a decent value bit of kit.