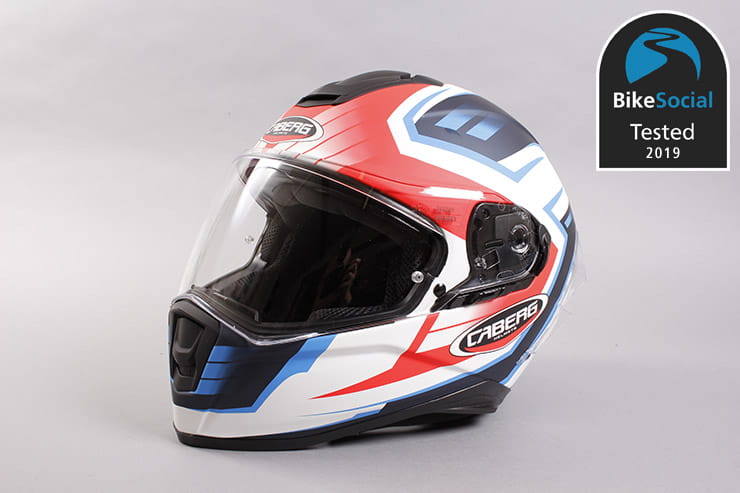 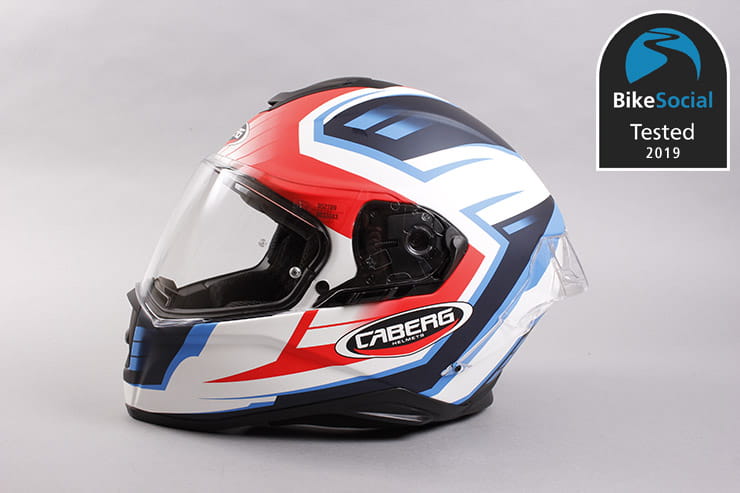 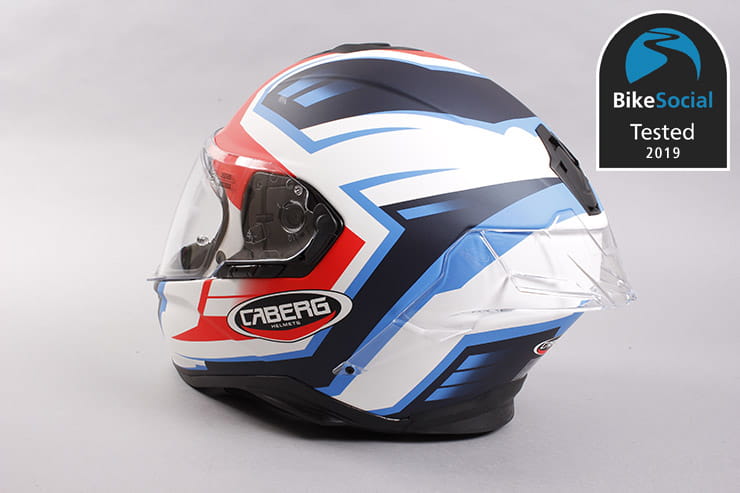 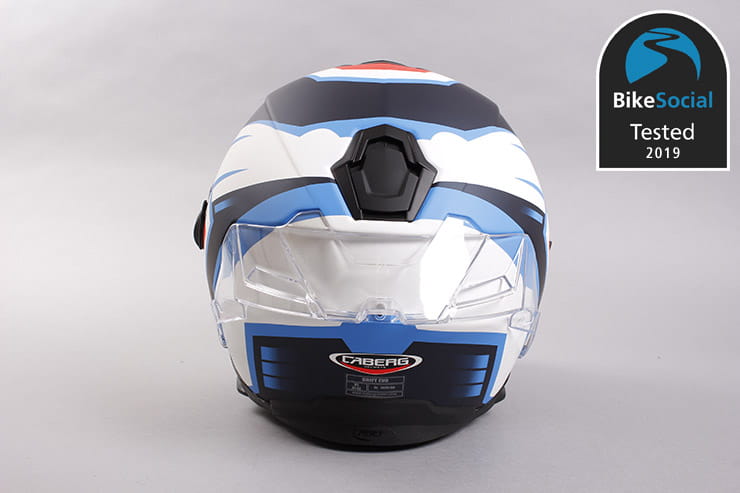 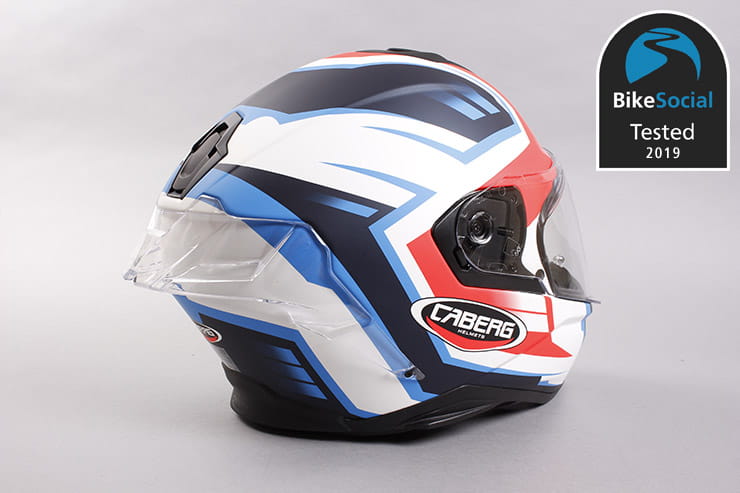 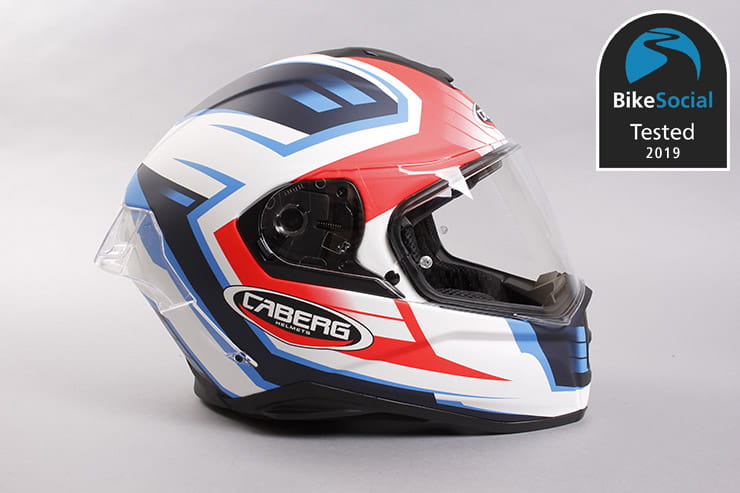 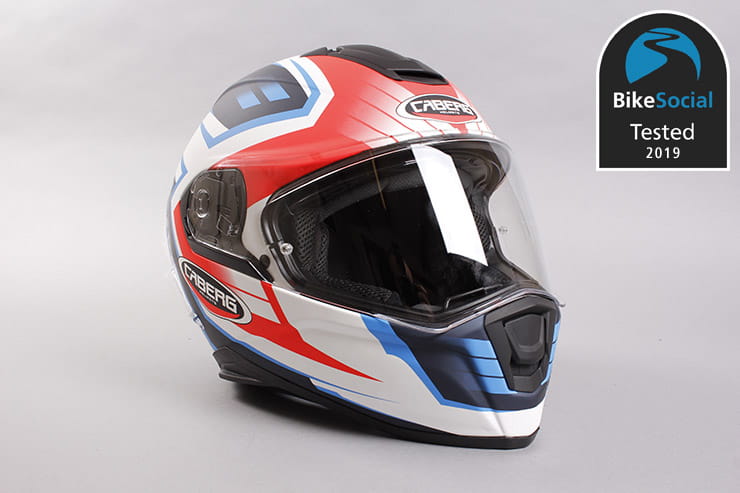 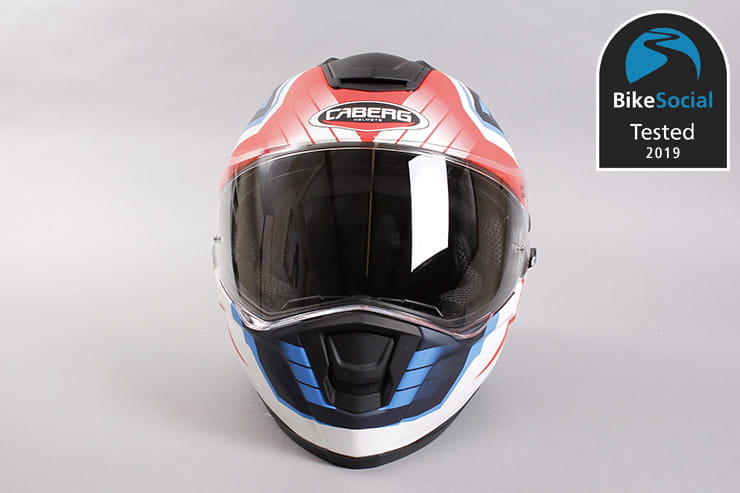 I’ve had this Caberg Drift Evo motorcycle helmet on review for several months now and have ridden around 3,000 miles with it on my Triumph Street Triple RS in a variety of weather conditions…

This composite fibre shell has a nice matt finish with some sharp contouring that adds to its sporty look. Sculpted channels from the chin guard running along the side to the rear diffusers in conjunction with the rear spoiler make for what I reckon is a stylish design.  According to Caberg, this combination enhances the aerodynamics at higher speed and reduces turbulence; a statement I am in full agreeance with; it sits very well balanced on the head even on my naked bike at speed.

Overall build quality of the Caberg is good, however considering its mid-range price tag I do have a couple of gripes. Firstly, the graphics at the interface with the visor window beading were slightly puckered and split; granted it’s only over approximately a centimetre in length and hardly noticeable, but I’d expect better straight from the factory. Secondly, I’ve noticed that after some use one of the visor mechanism screw fixings has started to develop some surface rust, despite its painted finish. A minor point but not something I’ve experienced with any other helmet even during the depths of winters on salty roads.

The aesthetics of this Drift Evo are of course subjective, but one other point I’d like to highlight is the transparent dirt trap of a spoiler; it looks awful after a bout of rain and it’s nearly impossible to clean the internal face without removing three torx-head screws. This probably won’t be of concern to most fair-weather riders, but it was a major peeve of mine while using it on my daily commute. It’s worth noting however that this spoiler is clear only on this ‘Gamma’ version (£259.99) – all the others have it coloured, so the dirt won’t be a problem. Plain colours start at £229.99, then go up through £244.99 to £259.99 and onto the £309.99 Carbon fibre models. 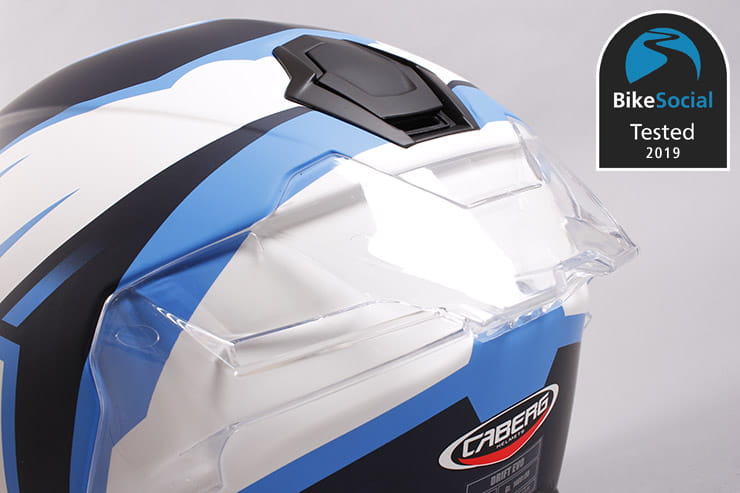 This small helmet weighs in at 1529g, while opting for the Carbon version is claimed to shed a further 100 grams of this weight when compared to the composite fibre shell. Either way, this doesn’t feel a heavy lid when you’re wearing it at all. 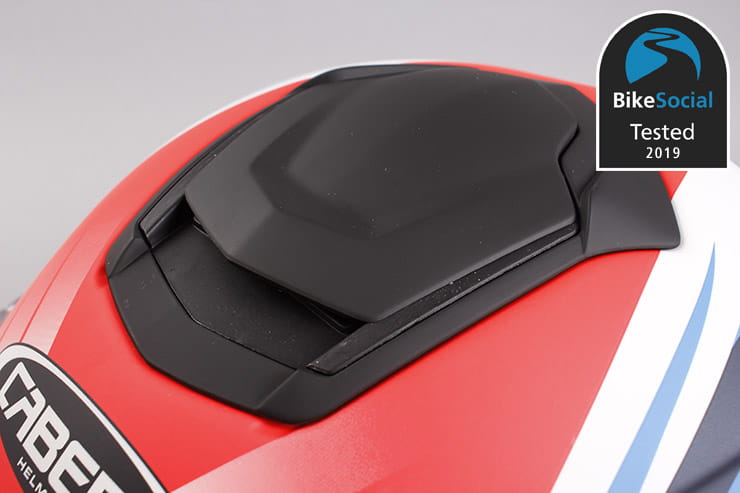 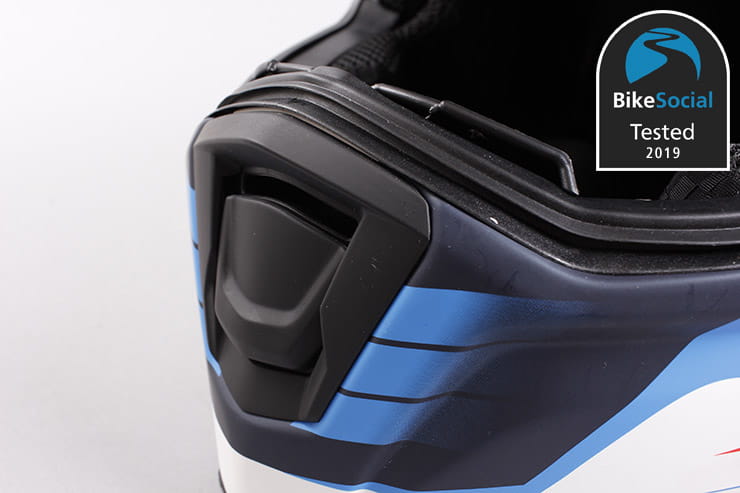 The ventilation system on the Caberg Drift Evo consists of a single large chin vent, a crown vent to draw air into the helmet and a single rear exhaust above the spoiler to remove it.  All three have sizeable glove-friendly controls that are easy to locate and the top vent has an intermediate setting between fully-open and closed to help regulate fresh airflow inside through numerous grooves; it works efficiently in forcing adequate air over the scalp and onto the internal face of the visor to avoid misting.

During wet rides I didn’t encounter any noticeable water ingress through the vents, and on the hottest of summer days this system also performed admirably in keeping temperatures pleasant. Honestly, I don’t think you could ask for any more here.

For those attaching the likes of a GoPro to their helmet, the large crown vent and sharp contouring make top mounting difficult. I personally prefer to side-mount my camera but again the contouring beneath the visor along the sides of this helmet make for limited mounting options. 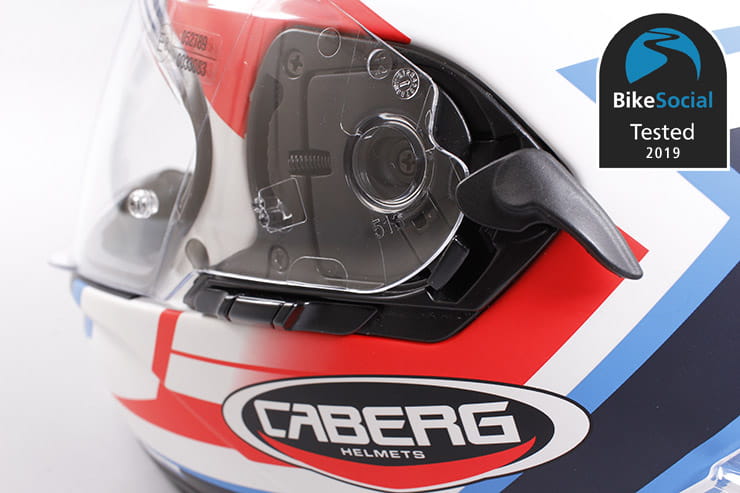 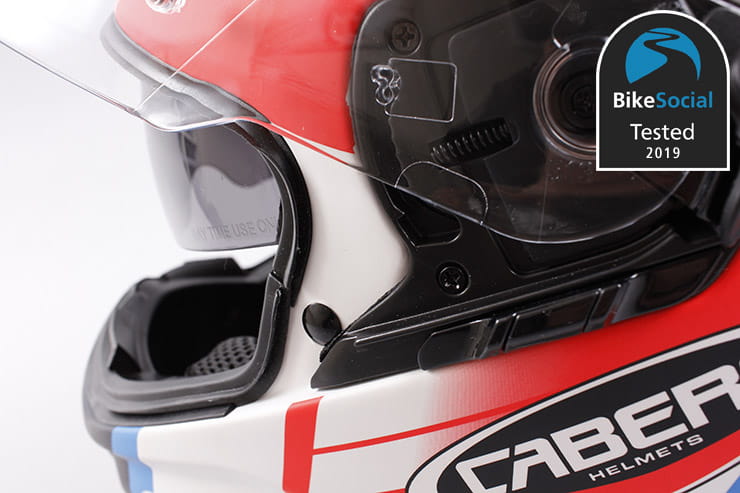 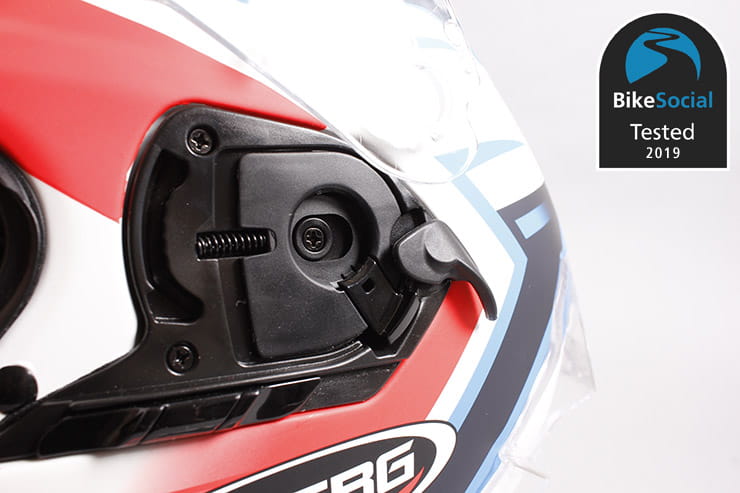 The Drift Evo Gama uses a quick-release visor mechanism that allows visor self-adjustment to ensure a close contact between the visor and window beading. This basically means the visor is spring-loaded and therefore it closes – whether you like it or not – when in a near closed position.

When first testing the visor seal for water resistance there was a slight leak on the right hand side, however the seal is an angled ‘flap’ – running a finger along it brought it back to position and from then it was fine; the visor mech works great at keeping the water out during rainfall..

A lever on the left side of the visor mechanism shifts the visor forward by 5mm to eliminate misting. When this lever is lifted, the visor is also locked to avoid sudden opening while on the move. On first impressions this system looks great, however the quick release is far from intuitive or quick, and the visor can fly open of its own accord when checking blind spots under heavy acceleration at motorway speeds. Yes, this helmet visor can be locked, but only if you want your visor cracked open; you basically get to choose between the options of slight wind in your face from an open but locked tilting visor, or no wind with an occasional blast from a closed but unlocked tilting visor that unwittingly opens; especially not ideal when it’s raining.

This helmet includes an adjustable Pinlock Max Vision 70 insert (the mid-level performance of anti-fog) to avoid misting, and is also equipped with an integrated anti-scratch sun visor that’s easily manoeuvrable with a lateral lever at the left-hand side visor mechanism. The sun visor comes down nice and low while providing enough clearance to your nose and is also easily removeable for track days. 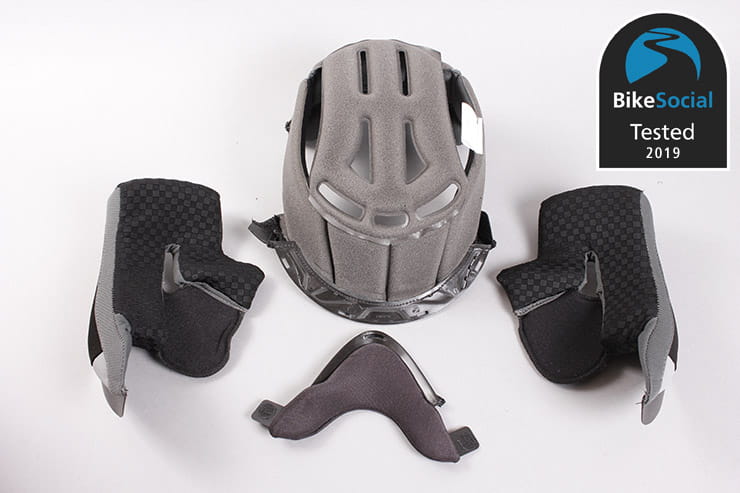 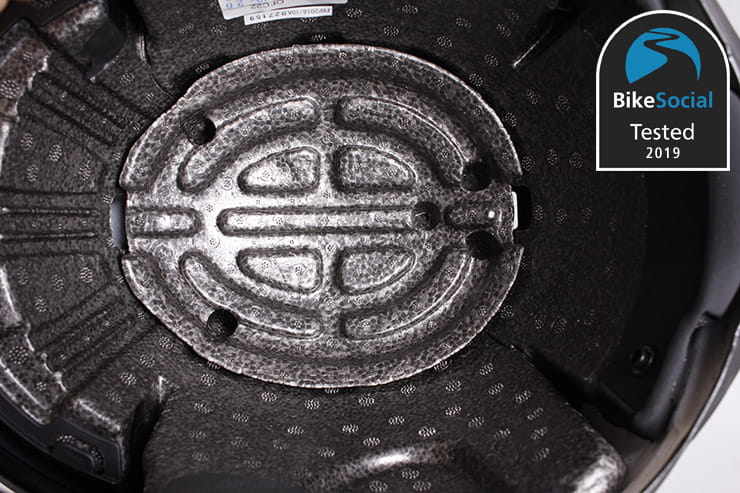 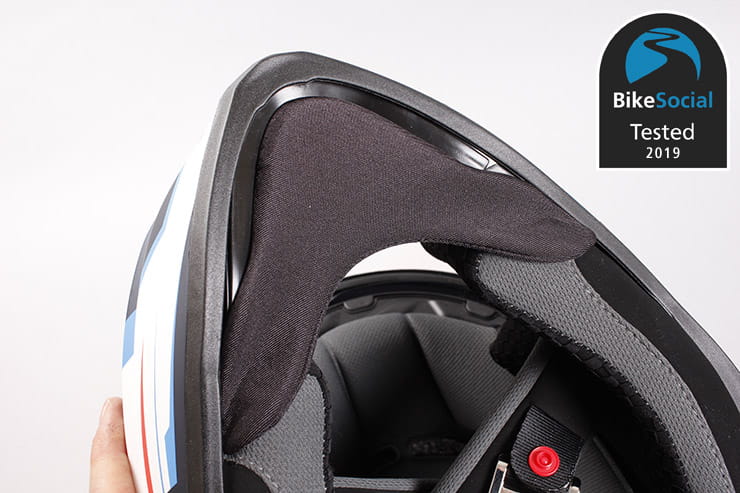 Inside the Drift Evo you’ll find a removable and washable liner. It also comes with a neck roll to reduce turbulence, a chin curtain to help reduce noise and is ready to install a communication system with spaces dedicated to speakers and a microphone.

The lining is soft enough against your face and offers a snug fit that hasn’t compressed with use, while remaining easy to put on and take off. The only visible wear to the lining during use is where my Rukka jacket collar’s Velcro fastening has rubbed the underside of the neck roll, so I can’t really complain at this. 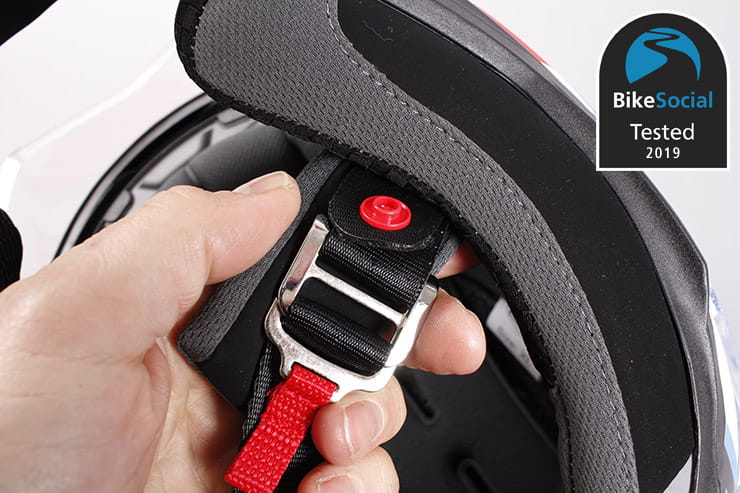 This helmet is fitted with a double-D buckle that goes to show the intended racing use of this helmet. I’d personally always opt for this type of retention system as it’s simple and reliable with no potential mechanism failure.  Some may however find a potential drawback in any double-D buckle in that they’re pretty much impossible to use with gloves on.

The fit of any helmet is very subjective and it’s of utmost importance that the size and comfort is correct for you. The Drift Evo felt fantastic on my head, with absolutely no pressure points or odd protrusions.

The cheek pads have been redesigned to offer a closer fitting and it’s possible to change and install a different size to get a custom-correct fit; for me it felt great straight out of the box.  The chain guard doesn’t have a great deal of clearance from your chin, however you’ll only notice this whilst trying to scratch your face while on the move and it has no impact on putting this helmet on or taking it off.

The Drift does include rebates in the lining for spectacles, but fitment can still be a little on the tight side depending on the style of frame you use. As glasses are not a legal requirement for me just yet, I found I opted to leave them at home as the helmet caused them to sit wonky with very little clearance to the integrated sun visor; it’s worth checking if you wear specs.

Noise is a subjective topic and can also be influenced by numerous factors, for example whether the rider has a faired or naked bike, the use of screen deflectors etc. I personally never use earplugs and while riding my naked Street Triple found the Drift Evo Gama to be slightly above average on reducing noise. I found this helmet to have good noise suppression and never once encountered any of sort of whistling.

Caberg really was on the right tracks in producing a quality helmet with the Drift Evo, and despite some minor quality-control gripes, it’s a good mid-range track day lid.  Unfortunately for day-to-day use, the tilting visor mechanism really lets this helmet down for me. I personally want the option of having my visor safety locked and fully closed, and for that reason alone I ‘d struggle to recommend it.