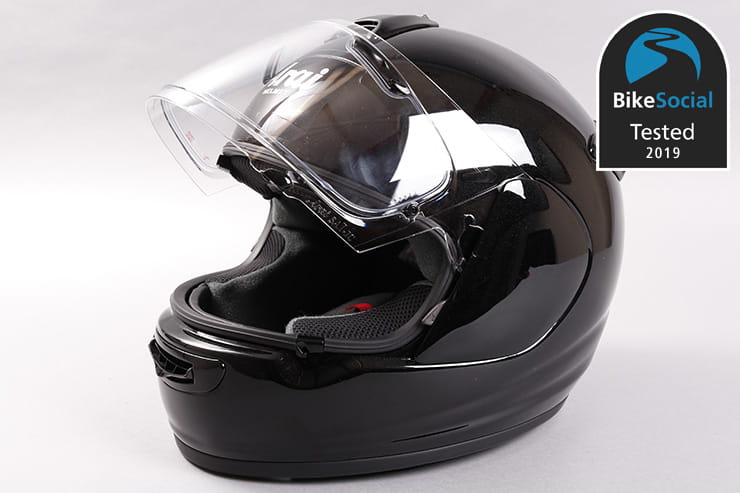 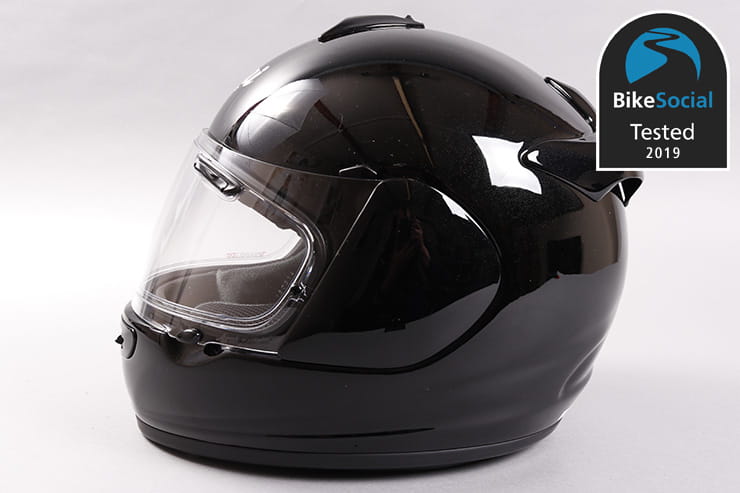 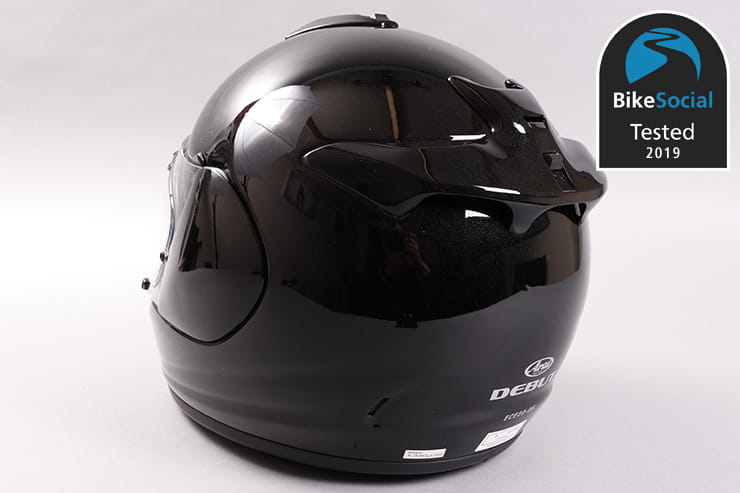 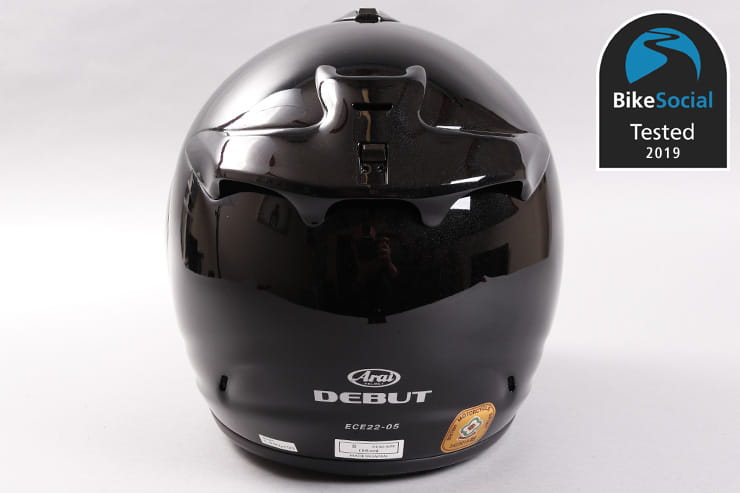 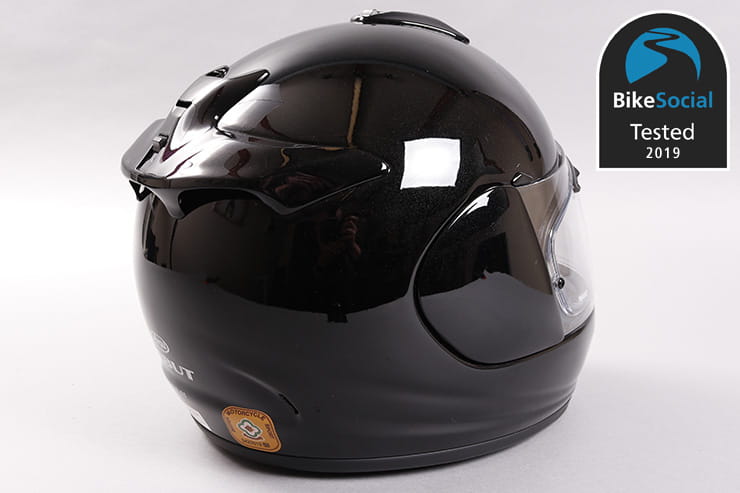 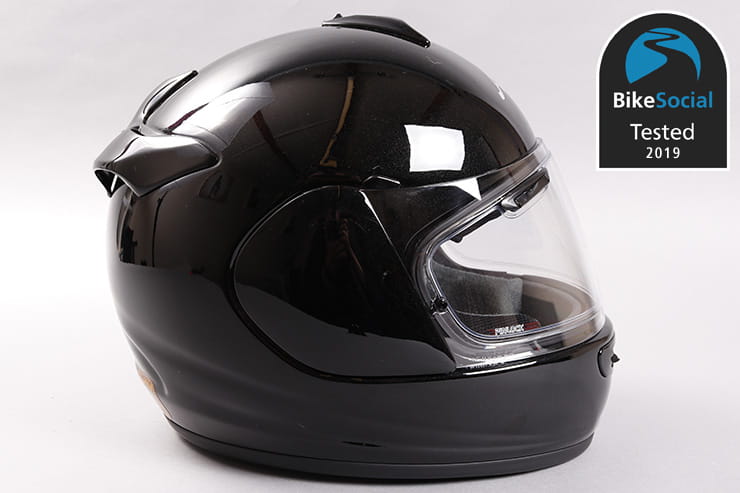 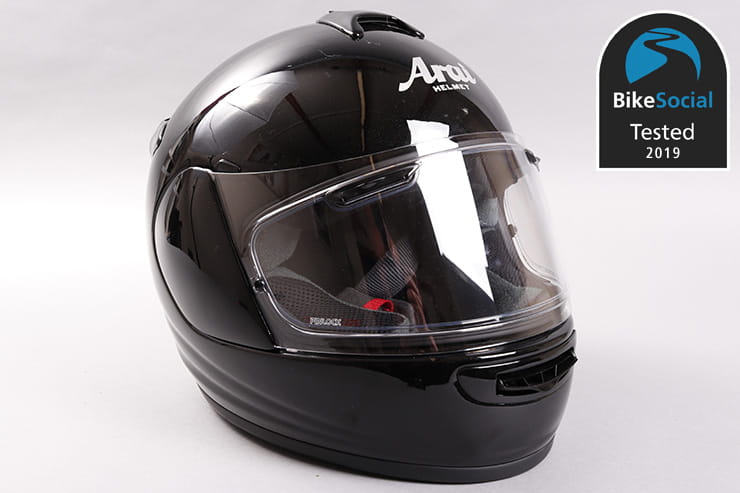 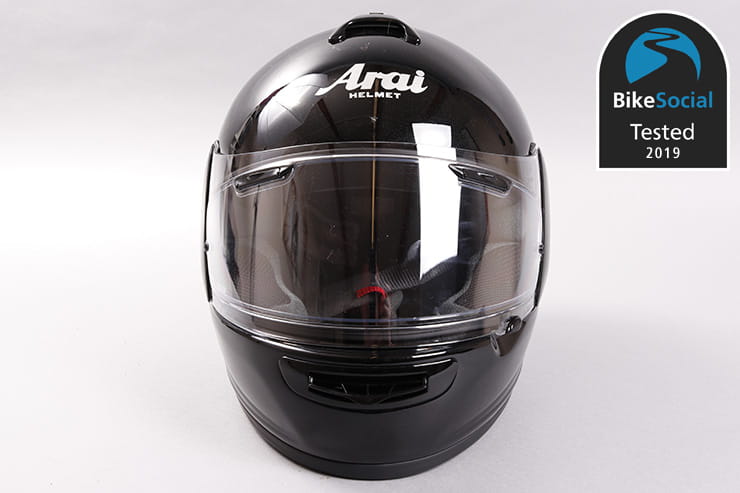 The definition of what represents good value will vary massively between individuals. And what is ‘cheap’? With a huge range of budget-friendly motorcycle helmets on the market, there aren’t many who would consider the £299.99 Arai Debut on review here to be cheap.

But other than this UK-exclusive lid, the Profile-V is the next in the Arai range, starting at £379.99. A full colour-scheme RX7-V will set you back £829.99, while the flagship carbon-fibre RX-7 RC is £2,524.99. Relatively speaking then, the Debut is a cheap Arai, but does it carry enough of the features that make some riders so committed to the Japanese brand? I’ve been wearing it on a Yamaha MT-10 and a Kawasaki Versys 1000 for 1,500 miles…

While some consider Arai helmets to be losing ground to other brands with drop-down sun-shields and ever lighter designs, Arai steadfastly refuses to do anything that it considers would compromise safety. A unique resin bonds several fibre layers to create an extremely strong outer shell; the core of what Arai believes makes for the safest design.

The finish, for what to this brand is a ‘budget’ lid, looks great – a really deep black with a gorgeous, fine, coloured metal flake. The lacquer can be lightly scratched a little easily, though being black this is more noticeable than it would be on other colours (and you still have to look very closely to spot any of the fine marring).

You can also choose from matt gunmetal grey, matt black, light gloss grey and white for the same cost. If you go for any of the graphics, the price jumps to £379.99.

The shell has the typically smooth Arai shape, which is designed to glance off in an impact and help prevent jarring to the brain (in a similar way to MIPS). Sculpted channels on the sides sweep round to the lower exhaust vents, making for a stylish design.

Stated as 1,440g ± 50g, this size small weighs 1,445g. The solid outer shell does contribute to the mass, and there are lighter helmets, but this never feels heavy or awkward in use; wind resistance is more likely to make you aware of a helmet when it’s on your head. 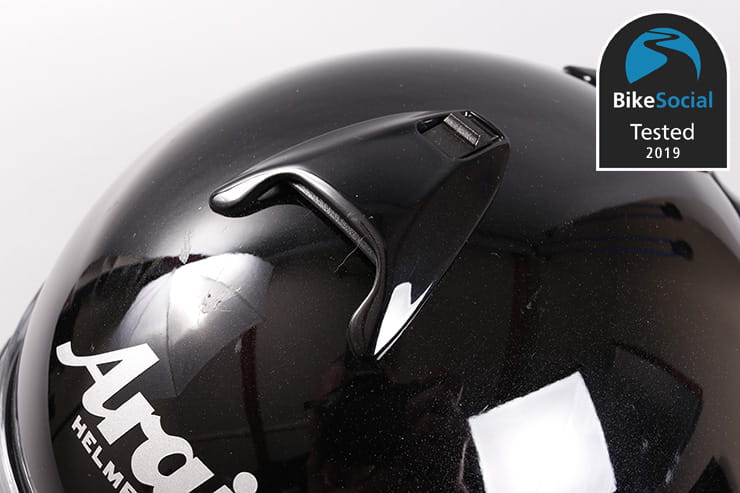 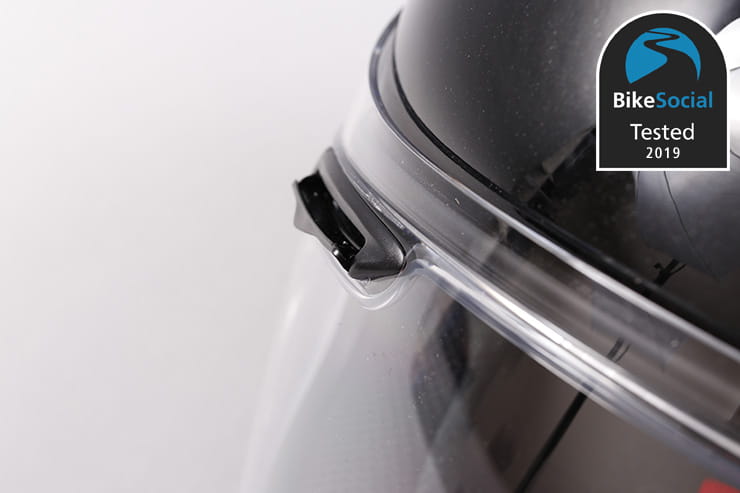 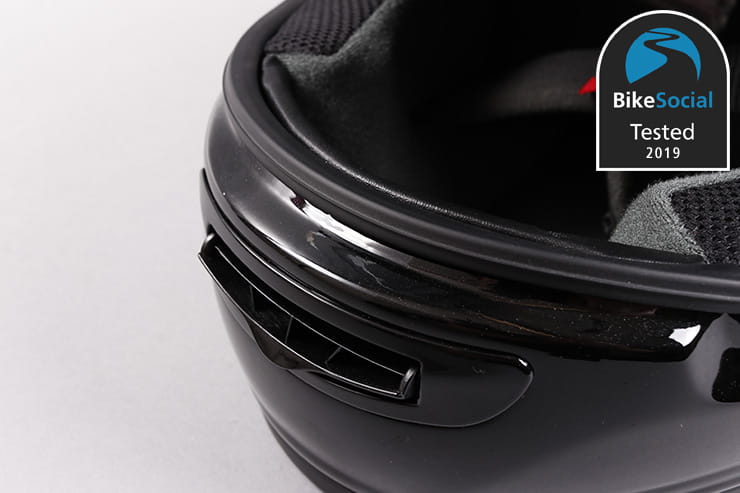 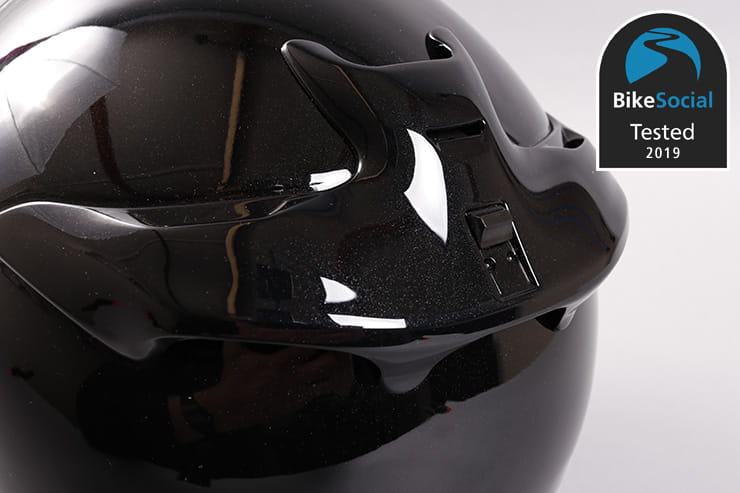 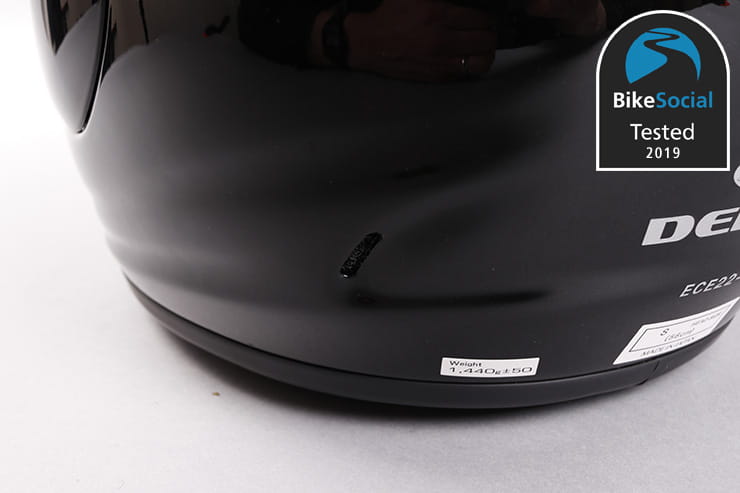 The visor itself also has two brow vents that feed ports to cool the sides of your forehead.

With no chin skirt, the Debut is naturally quite airy even with the vents shut – it’s not billowy, but you should be aware that if you’re riding through the winter it’s cooler than a helmet with a more sealed neck area, though you could consider an aftermarket neck skirt if you feels it’s necessary.

There’s very little channelling built into the inner shell, so air movement is restricted to the space around your head that’s created by the liner. The vents don’t really blast your head or face, but the air from under the chin is constantly moving, so I’ve never felt overly hot in this lid. It’s not got the high-performance ventilation of the top-end RX7 for instance, but I’ve found it very comfortable, without having that irritating feeling of jets of air tickling the top of your head. 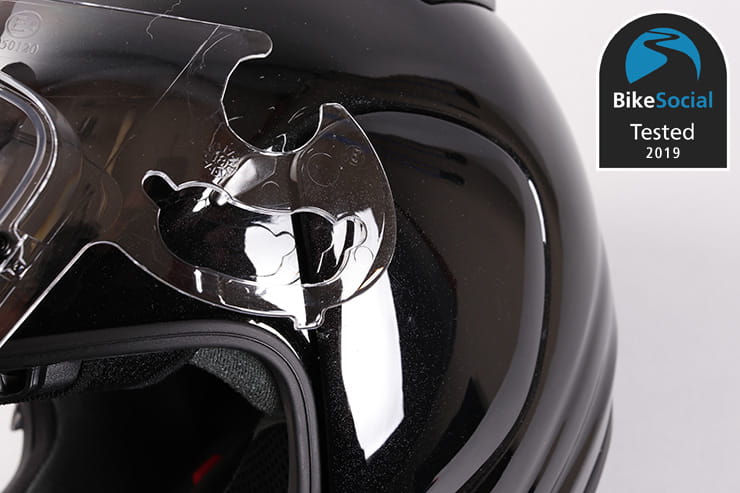 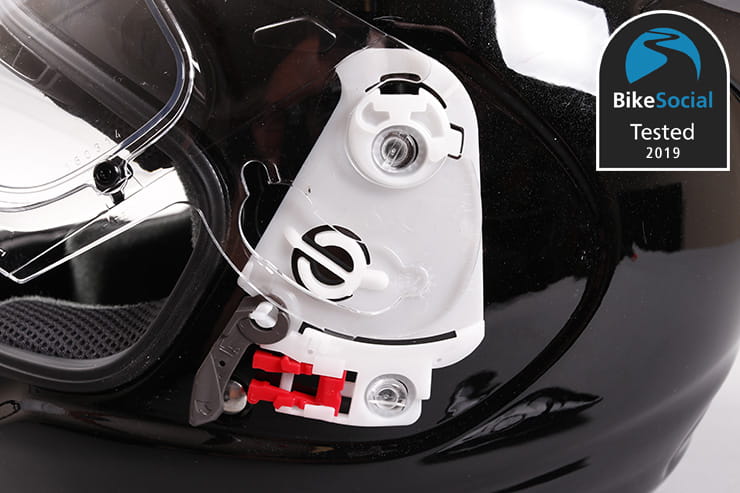 The Debut uses Arai’s Super Adsis I visor system and comes with a Pinlock Max Vision 120 anti-fog insert. 120 is the highest performing insert (30 and 70 are also available, the number describing the level of fog-prevention). Being Max Vision, it’s quite large, so doesn’t interfere with your vision out of the helmet aperture (which has a good vertical and horizontal field of view). The visor is also recessed to accept the Pinlock, which is an improvement over previous Arais.

It’s the mounting system that comes in for criticism from some riders. I’ve no problem with it, and I know other long-term Arai owners who are happy, but the technique is to simply lift two levers, then follow through as you pull the visor clear. Putting it back in is just as easy, and it’s quicker than most ratchet systems. But it does require a little force, and those who’ve used Arai’s original mechanism (which had no lever assistance), will tell stories of the plastic side-pods occasionally breaking after several years.

Some of the new Arais in the range (like the Profile V) have a completely new mechanism that sees the side pods pop off to replace the visor. That’s slightly slower to do, but is easier to get the sides off for cleaning, and puts less strain on the plastics.

To keep the visor working at its best, it’s important to keep the mechanism clean, and to sometimes give it a dab of the silicone oil that’s supplied. The advantage of this system – and I believe it’s a big one – is that the visor can be set at any position you like, not one dictated by a clunky ratchet.

The one thing I don’t like about the visor is the small thumb tab on the left – it locks down securely, but it can be hard to open with bulky gloves on, and really tricky when you’re stopped at traffic lights, holding the clutch in with your left hand and trying to thumb the visor open with your right. The higher-end Arais (including the Profile V) have a new, larger thumb lever, but this is still awkward with your right hand.

Locked down securely, the visor seals well and doesn’t allow any water to dribble down inside when you’re riding in the rain.

There’s no drop-down sunshield on this, or any other Arai. I don’t miss it as I prefer to have the minimum number of layers of plastic between my eyes and the road, and I also find the bright line along the bottom edge a bit distracting. Having said that, they can be handy when the conditions suddenly change. I prefer using a dark visor and carrying the clear with my in case I end up out at night, but of course this adds around £45. It does look good though.

The other option is to use Arai’s drop-down Pro Shade that attaches to the front of the visor; I’ve heard good things about them, but I just don’t like the design. 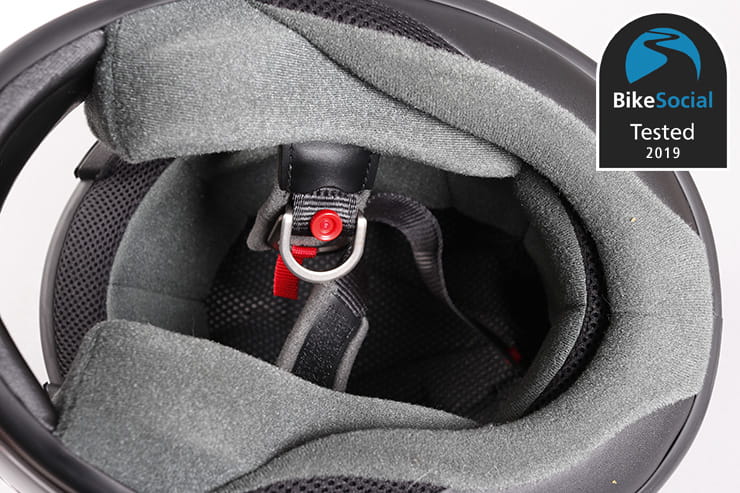 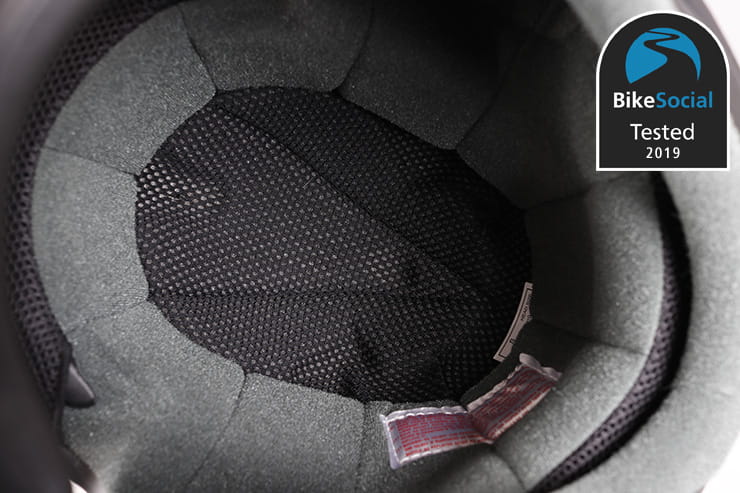 The lining is the main place that Arai seems to have saved money.

At this price (or at almost any price now), a fixed lining is a bit of a disappointment, but only in that it makes cleaning a little harder. If you’re wearing this Arai every day, washing it will require rolling a towel and creating a donut shape in the bath to stand the helmet upside down in, then washing it out thoroughly with the shower head and some baby shampoo. It’ll take longer to dry than if the lining could be removed (don’t put it over the radiator), so if a fully removable lining is important to you, you’ll need to look at the more expensive models, or another brand.

The cheek pads are removable, and the covers for these can be washed by hand (or very carefully in the washing machine), so it’s not all bad. These can also be replaced if they get heavily worn through very regular use.

There’s enough space to get a pair of speakers into the cheek pads for an intercom – I have the Cardo Freecom 1+ installed, and while it took some fiddling to get the speakers comfortable, they’re now fine. I wouldn’t recommend that brand’s thicker JBL upgrade speakers though as they’re that little bit too thick.

The lining is very soft and comfortable, with a padded mesh in the skull cap. As with all Arais and many other lids, the neck skirt area can get caught and slightly frayed if you have exposed Velcro loops on your jacket’s collar, but I haven’t had any problems. 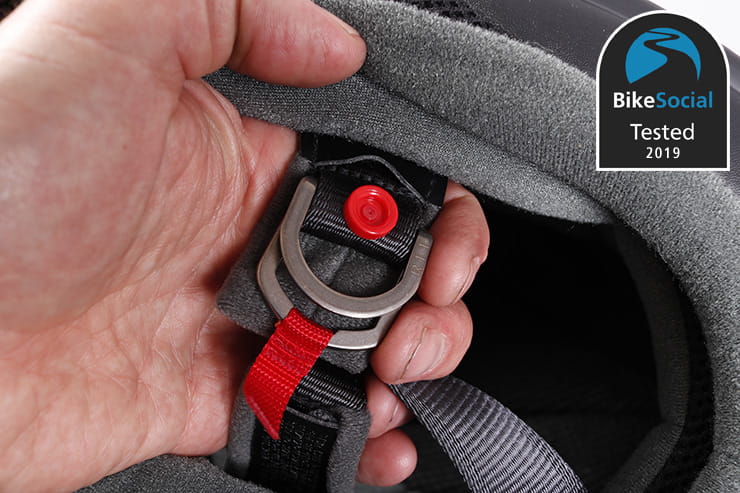 The double-D ring fastener gives a secure fit every time – I prefer the convenience of a micro-ratchet strap, but this is another of Arai’s no-compromise safety design principles. The soft lining around the strap makes it comfortable all day on the bottom of my neck.

The Arai Debut is gloriously comfortable; no bedding in, no sore-spots and no movement at speed. It fits me perfectly.

I don’t feel that my cheeks are being pushed in too hard like some helmets can, but by gripping the bottom of the jaw well, there’s no movement even at speed with the Debut.

While I don’t wear glasses, having tried spectacles with this Arai, I’ve no problem getting them on and they fit comfortably on my face.

Having praised the Arai so highly though, fit is incredibly subjective, so always try any lid on properly before you buy – make sure it’s the right size, that there are no pressure points, and that it can’t move around on your head. 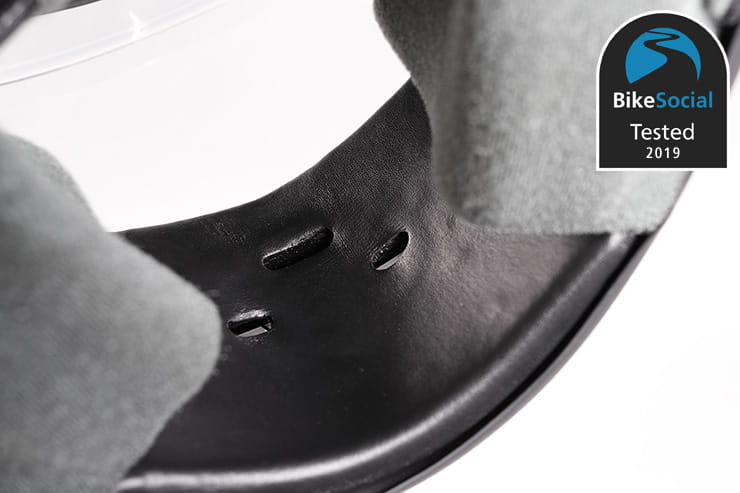 With the open neck area, this is never going to be the quietest lid available, but none are so quiet as to not need ear-plugs. I’ve found the Arai Debut has no unusual whistling or booming sounds, and is pleasant to wear over several hours.

It’s easy to look at Arai and see it as a company losing ground to other brands by not offering the features of many – often much cheaper – helmets. I think of it this way; if Arai wanted to increase its market share, it would just have to pop a drop-down sun-shield in, or change its visor mechanism. But it won’t, because the Japanese company won’t compromise on what it believes is the best design. Good business sense it might not be, but I can’t help but admire them.

The Debut is, of course, certified to ECE 22.05, and it’s got ACU Gold approval. It hasn’t been tested by SHARP yet – Arais used to perform poorly in side impact tests, but have been getting better ratings more recently. Arai has its own test data to suggest that the smooth shape, which allows the helmet to slide rather than grab in an impact with the road, is a design that shouldn’t be compromised with recessed visor mechanisms, spoilers, or cut-outs for sun-shield mechanisms. It tests the shell repeatedly in multiple locations, but it’s still the company’s own data.

Ultimately, as with other bike kit that should all now be CE-approved, the testing standards mean that a minimum requirement has been met; only when you have a product in your hand and you’ve looked at the experiences of others can you decide whether something offers the performance and the value that you want.

The Arai Debut might not be cheap, but I’m pleased that it’s given me the opportunity to have one. As a five-year investment, and given the comfort and performance it offers, I’m very happy with it…