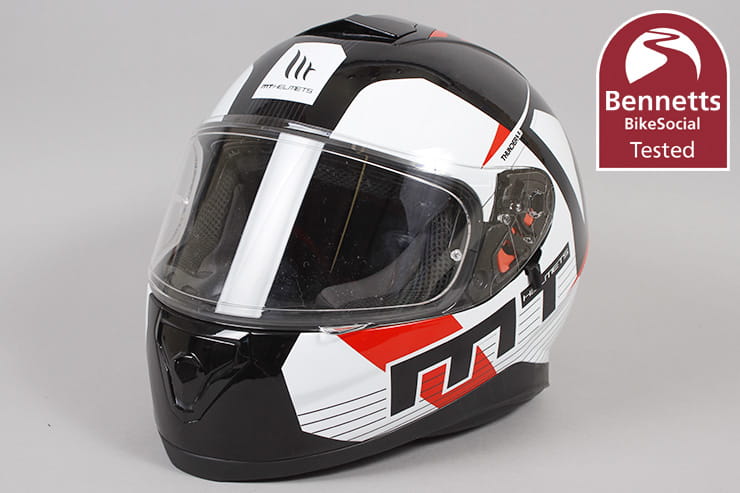 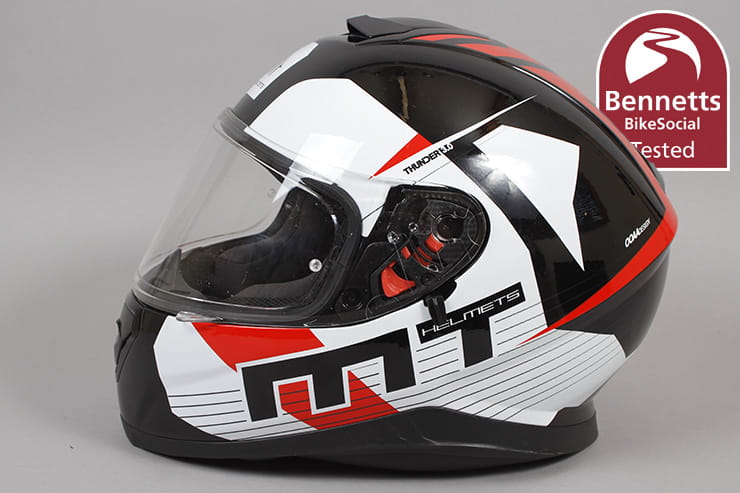 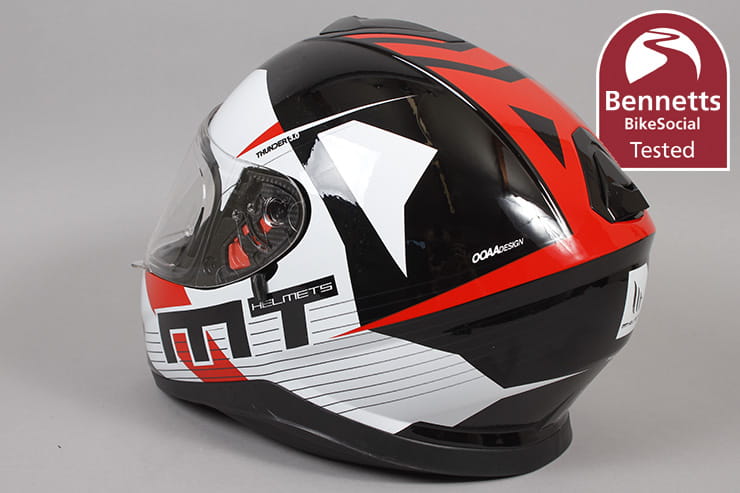 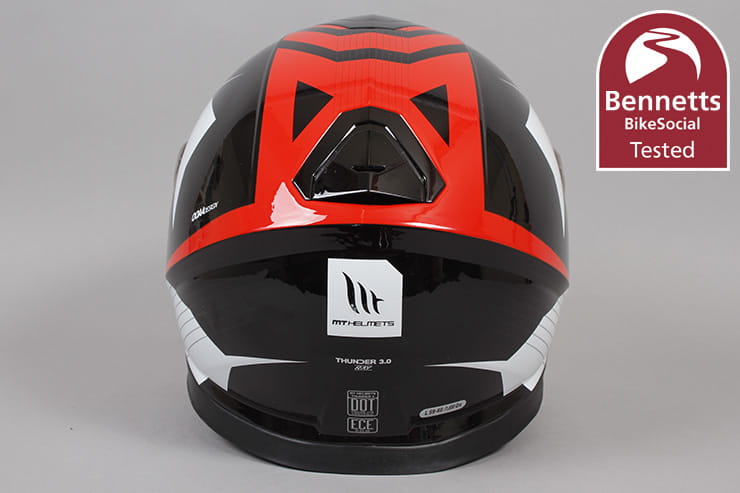 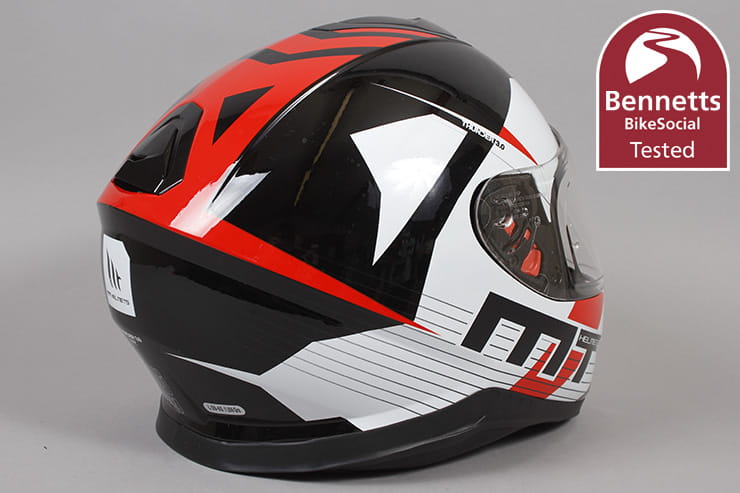 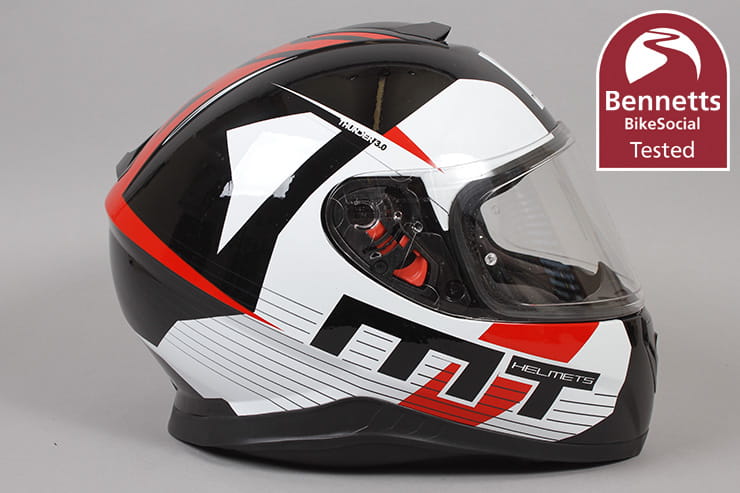 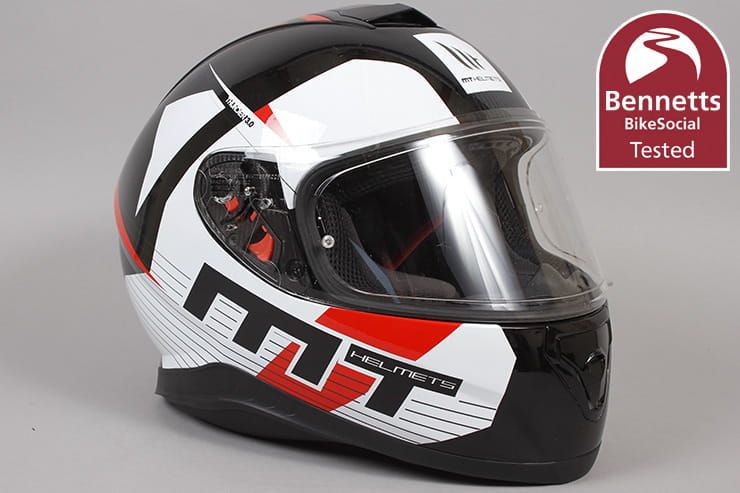 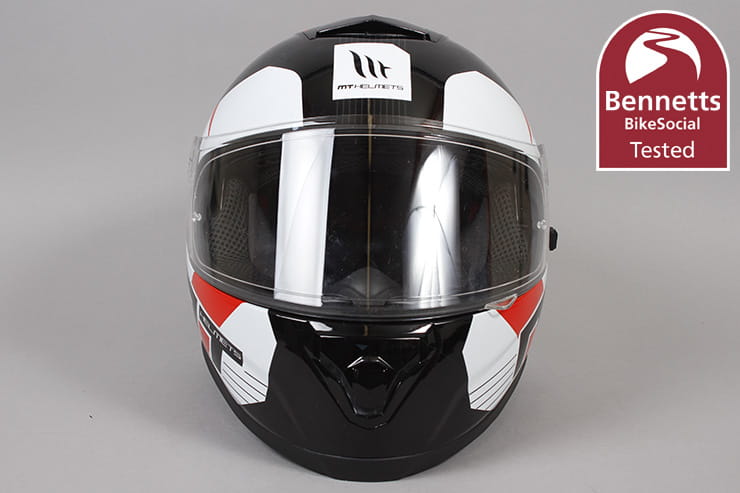 The MT Thunder 3 on review here is a relatively budget helmet with what appears to be a decent spec for the price. I’ve been using it on a BMW S1000XR, 1999 Kawasaki ZX-6R and a Honda MSX125 to find out if it’s a good value alternative to more expensive lids…

Starting at an RRP of £99.99, this is the ‘Ray Black White & Red’ version, which retails at £109.99. Given the deep shine and well-applied graphics on this polycarbonate shell though, it looks like it’d cost a fair bit more.

This is an ECE22.05 helmet, with a SHARP test rating of four stars that puts to shame some much more expensive lids. The helmet has met the ACU Gold Standard, but there’s no sticker supplied. This isn’t really a racer’s helmet, so it’s only something to consider if you plan on doing some track days. Though they’re rarely checked by scrutineers outside of racing.

There are two outer shell sizes used across the S to XXL sizes, which means that those with a small head won’t be lumbered with the larger and heavier outer shell used for an XXL. More expensive helmets have a spread of up to four shell sizes, though the difference is rarely very obvious.

Claimed to weigh 1,600g, this large came in at 1,667g. That’s at the weightier end of average, and while you’re aware of it when you pick the Thunder 3 up, it doesn’t feel heavy in use at all. 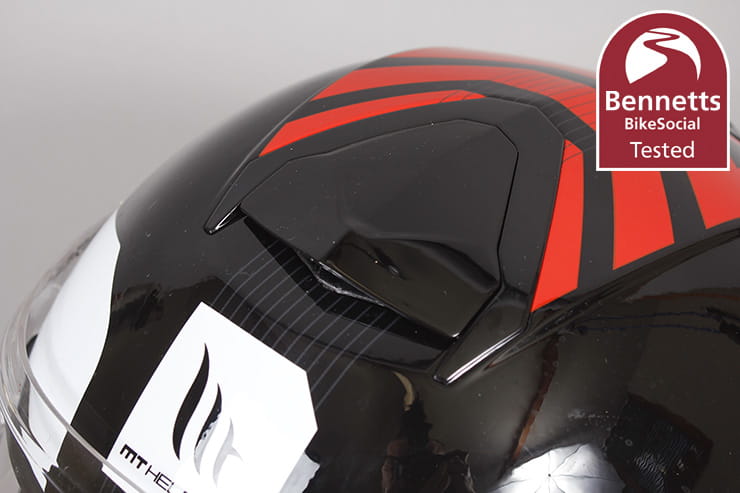 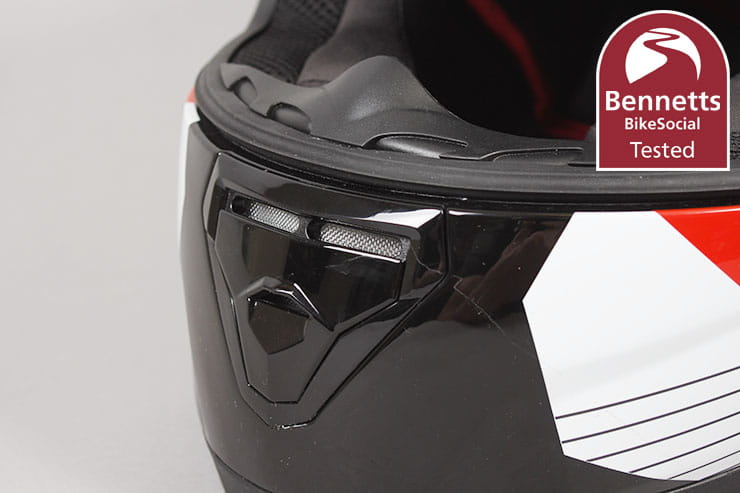 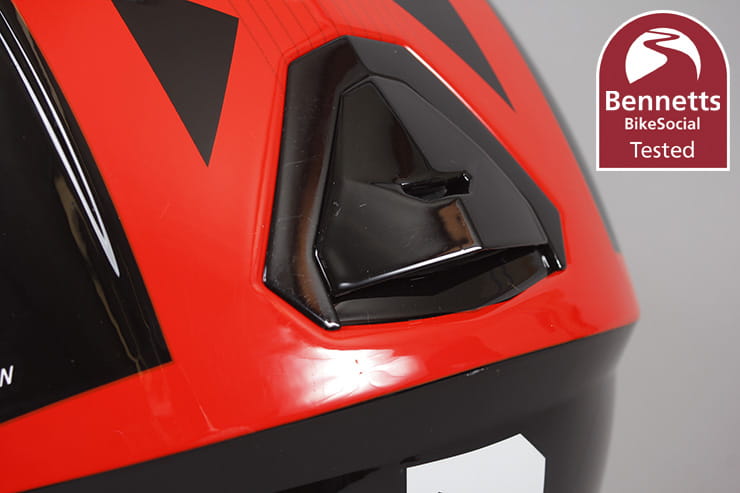 The three vents – one at the chin, one on the top and another on the rear – can all be opened and closed easily with the flat of the hand, so are no problem even with thick gloves.

The chin vent only directs air up onto the visor, and while it’s not that powerful, it will help in winter.

The top vent is more noticeable, giving a fairly strong blast when open that definitely makes a noticeable difference. Opening the exhaust doesn’t have an obvious effect, but it will be helping to draw warm, stuffy air out of the lid.

It’s no surprise that this doesn’t offer the ventilation of a top-end lid, but it’s also a quarter of the price. 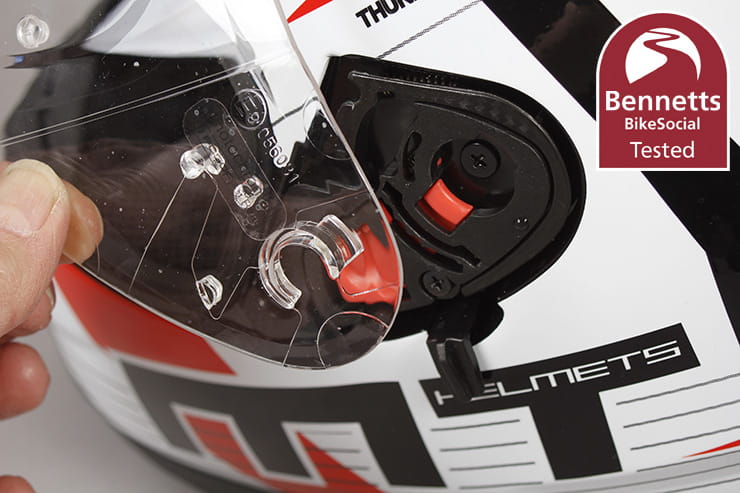 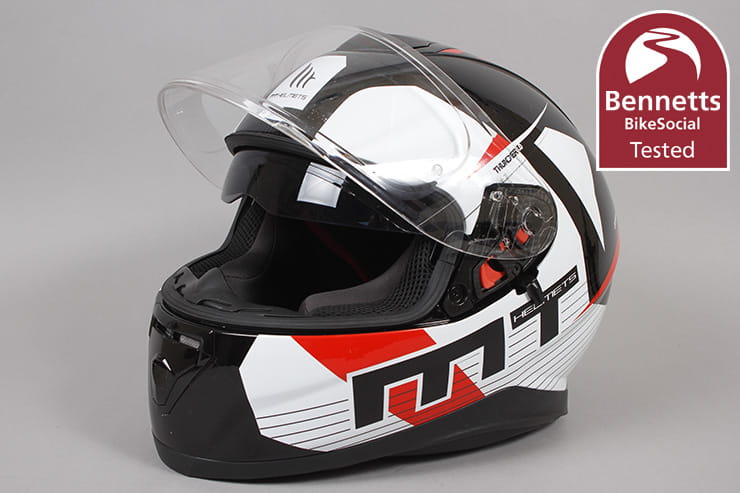 Cracking open the visor is one way to get a bit more air into any helmet, and I did find this a little lacking on the MT Thunder 3; while you can get it a few millimetres open with the lid off your head, when you’re riding there’s not really any other position except fully open.

There is a hint of a four-position ratchet, but the spring in the mechanism is very strong, so it’s hard to find those mid-points. I also noticed that if I did try riding with the MT’s visor open about a quarter, it would close itself as speeds rise.

There’s no Pinlock supplied with the MT Thunder 3 – if you’re using the helmet in the colder months you might want to consider one, though they retail at £24.99, so do budget for that. Those riding all-year-round – particularly in city traffic – can try an anti-fog coating, but an insert is the best bet. Still, for a sporty-styled lid of this price, it’s no big surprise not to have a Pinlock, and many buyers won’t miss it.

The visor doesn’t open all the way up and out of sight, leaving some of it in view. That’s not really a major issue – it just makes it feel a little enclosed.

Unusually, the integral sun-shield has a half-way position, which can be useful for shielding your eyes from the sun while leaving a clear view ahead; like a 1980s windscreen sunstrip! When fully down, there’s the usual bright line along the bottom that I find annoying with drop-down shields, but it’s no worse than others, and certainly better than many. Just make sure you remove the opaque sticker that completely covers the sunshield before you use it… riding through a city centre and dropping the shield down at 20mph to realise it’s there proved a bit of a shock.

The seal along the top of the visor aperture works well, keeping rain from dripping down the inside in front of your eyes. Any that does build up in this channel can get past the seal at the back of the aperture, which you can’t see, but in extremely heavy rain it can make the edges of the cheek pads damp.

There are no tools required to remove the visor, but it is a little fiddlier than some of the best, like HJC. Getting it back in takes a jiggle, but you will get used to it. 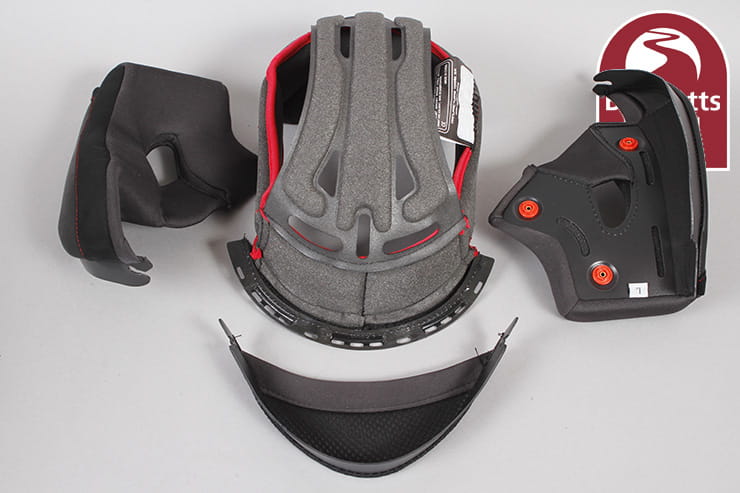 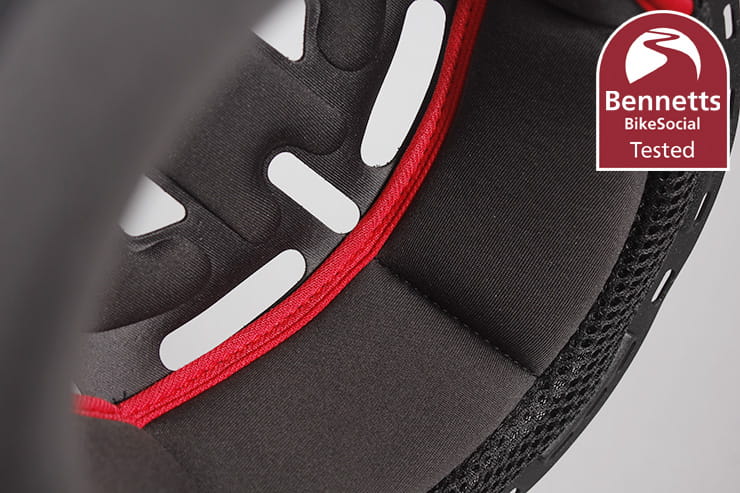 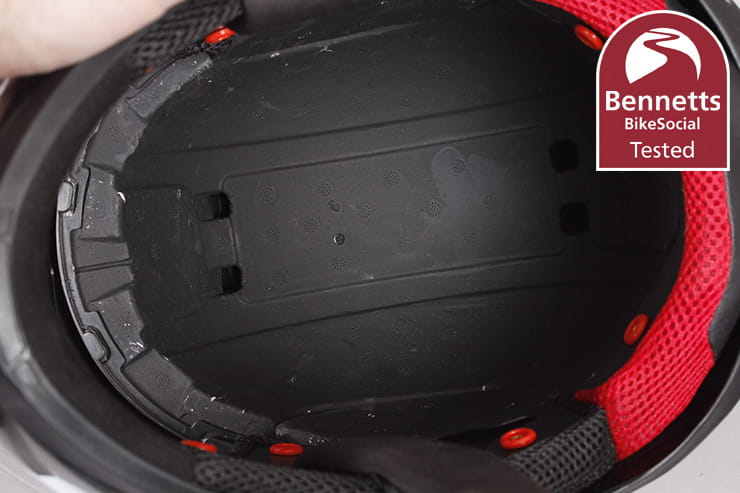 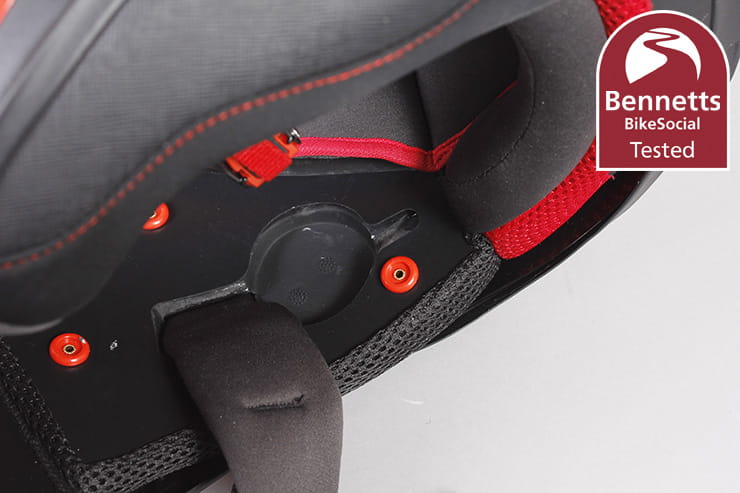 The MT’s lining and chin curtain is fully removable, which means you can easily wash it if it starts to get a bit grotty. It’s easy to remove and not too hard to put back in, with press-studs holding it in place.

While not as plush as a premium lid, the lining’s nicely finished. My only complaint is the red trim that’s sewn inside is just noticeable against my forehead at times – it’s a shame as it serves nothing but a cosmetic purpose, so I’d have preferred not to have it. Less conically-headed riders might not notice it.

The inner shell has recesses for intercom speakers that fit most fine, and will take the larger Cardo/JBL speakers with a little overlapping. 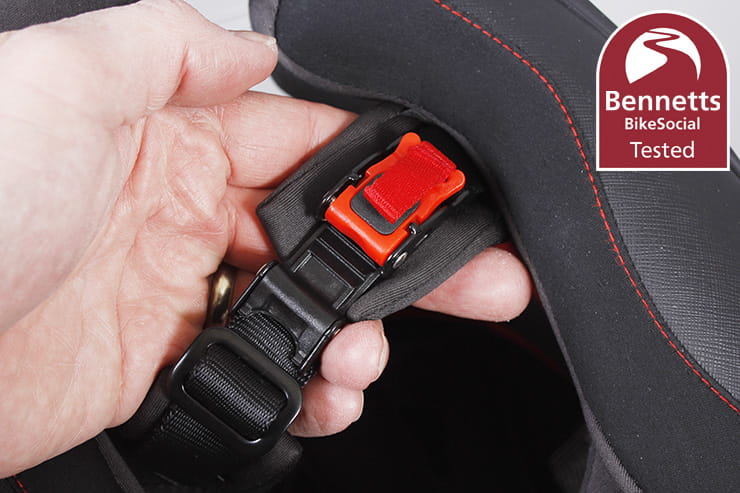 The micrometric strap adjuster is easy to use, being quick to release thanks to a fabric tab. While some prefer the traditional double-D strap, this works very well and is extremely secure. Just make sure that you adjust it to fit you when you first get the lid, so that the strap is nice and tight with about half the ratchet used.

It doesn’t matter how much you spend on a helmet, getting one that fits you properly is absolutely crucial.

Unusually, I found the MT Thunder 3 to be sized too small for me; I’m typically a medium, but in this I needed a large. That’s not necessarily due to it being a budget lid; Schuberths tend to be the same for me.

When trying on any helmet, make sure it fits snugly all around your head, but be very aware of any pressure points – they might feel minor in the shop, but after an hour they can be agony. For more information on choosing a helmet, click here.

I had no problem getting my glasses on with the Thunder 3 – the arms aren’t pressed into my head and they rest comfortably on my nose, though I did struggle to get the backs to tuck behind my ears properly. Try yours to be sure, but I had no issues riding in them. 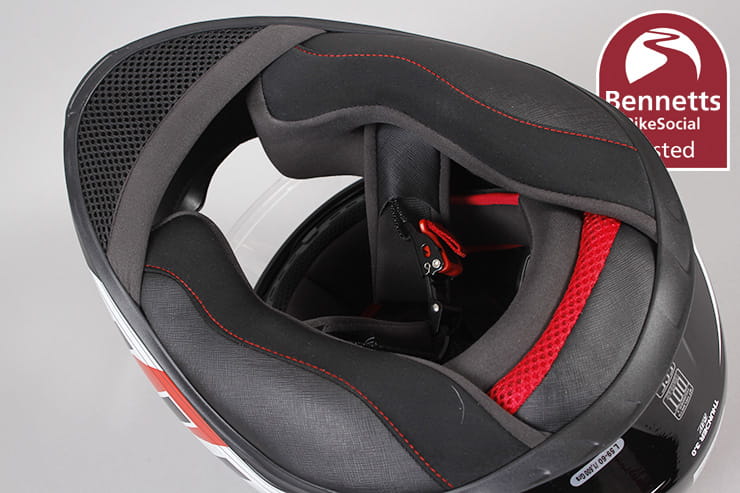 The MT Thunder 3 isn’t a noisy helmet, though like any, at above about 40mph you do need to wear earplugs.

Like most things, you do get what you pay for, and while the MT Thunder 3 isn’t the cheapest you can buy, it is relatively affordable.

As always, check the fit before you buy – that’s important with any helmet of any price, but given the sizing issue I had, it’s vital to check first.

If you’re riding a lot in all weathers it’s worth spending a bit more on a helmet for better ventilation, a Pinlock and a smoother visor mechanism, but for many riders this Sharp four-star lid could be all they need, so represents good value for money.