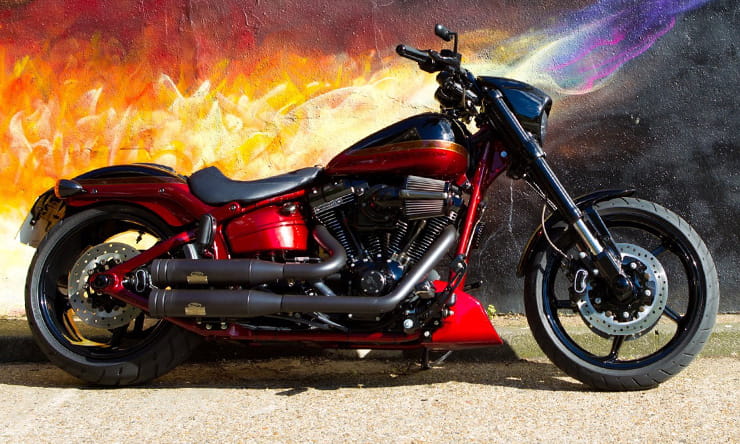 The first thing I do when I buy a bike is to consider how to make it more individual, and tuning is usually the top of the list. With a Harley-Davidson though, it’s the style that matters most to me.

On a recent 2,600mile ride to Austria, I fell off my CVO Pro Street Breakout in a snow storm – the exhaust took the brunt of the damage, so the time was right to replace it. I thought the standard system was lacking both aesthetically and audibly. My Harley didn’t look or sound like it should.

What’s most special about the Dr Jekill & Mr Hyde system I’ve fitted is that it has an electronically-controlled valve that, when open, allows the bike to really breath. And roar!

I had my system professionally fitted, as there’s a lot involved. There’s a catalytic converter installed, so you’re asked for your bike’s VIN, and the relevant cat for either Euro 3 or 4 regulations is fitted. The system comes with a credit-card sized certificate that has your unique exhaust number on it, and states that the system is fully street legal. If you’re stopped – particularly on the continent where the police are more strict – you can present the card for inspection and avoid the fine. 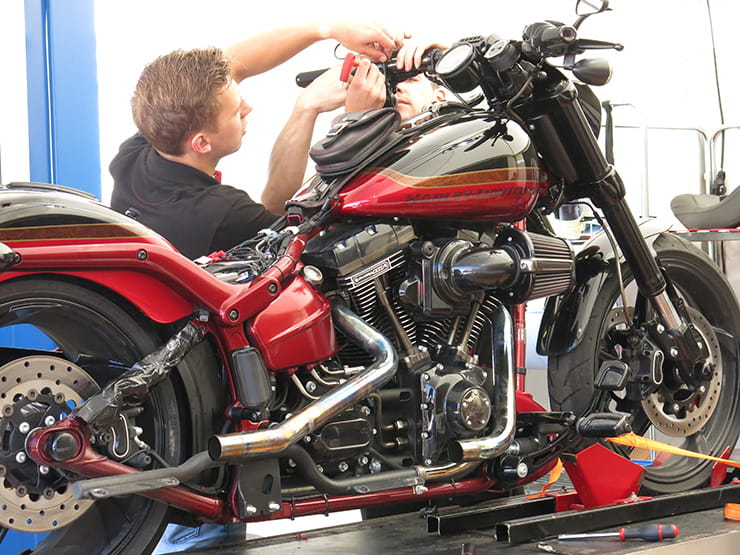 This exhaust is much shorter than stock, which means you can see more of the bike’s frame and rear wheel, with the option to fit uneven or level-mounted mufflers, and a choice of headers.

I have the ‘Smartbox 2’ electronic option, which allows you to operate the exhaust in three modes: ‘Travel’, where the bike has the valve closed so is at its quietest; ‘Dynamic’, with the valve half open and ‘Sport’, where it’s fully open.

There’s also an option is to fit the ‘Blackbox’ that’s programmed to automatically regulate the exhaust and comply with EC legislation, but with that you can’t have the pipes wide open and noisy.

Even with the valve fully open the noise is regulated to a certain degree due to the cat, and when you start the bike it fires up in stealth mode. I would never have thought it possible for a 1800cc machine to sound like a 125cc, but it does!

After fitting, my Harley was parked in a small courtyard at the hotel – leaving early each morning it was such a pleasure to start the bike and let the engine warm, without making any more noise than a car.

Leaving the courtyard, I had to ride through a pedestrian zone and could hear the church bells ring; the locals were happily saying good morning to me.

But when I reached the open road I hit the button and the full – much louder – bass tones kicked in. One morning when I was leaving I hit the button early and was met with some rather annoyed expressions and a hand gesture from one old man. I hit the button again and calm was restored. At home my neighbours are also far happier with me leaving early and arriving home late at night.

Another great feature of having the option to kill the sound is when coming across horse riders on country roads; as soon as I see them, I hit the button and pulled up – the animals were fine and happily trotted past, the riders very grateful.

The cat just slots in between the header and the muffler and can be removed, so you could take it out to boost the sound and gain some performance, but this would invalidate the euro certification, and reduce back pressure making the bike run lean and almost certainly requiring a fuelling remap.

There are a number of holes drilled through the circular valve mount inside the exhaust – when the valve is in the closed position the holes still allow a certain amount of flow, which is said to be roughly equal to what you’d get on your standard system.

I wasn’t able to check the air-fuel ratio as the valve is too close to the end of the system, so the dyno operators couldn’t get their sniffer down there, and didn’t have the adaptors to pick up from the lambda sensors.

Because the exhaust was fitted while I was in Austria, I wasn’t able to get a comparison with the OE system, but Harley claims 75hp and 111lb-ft at the crank. 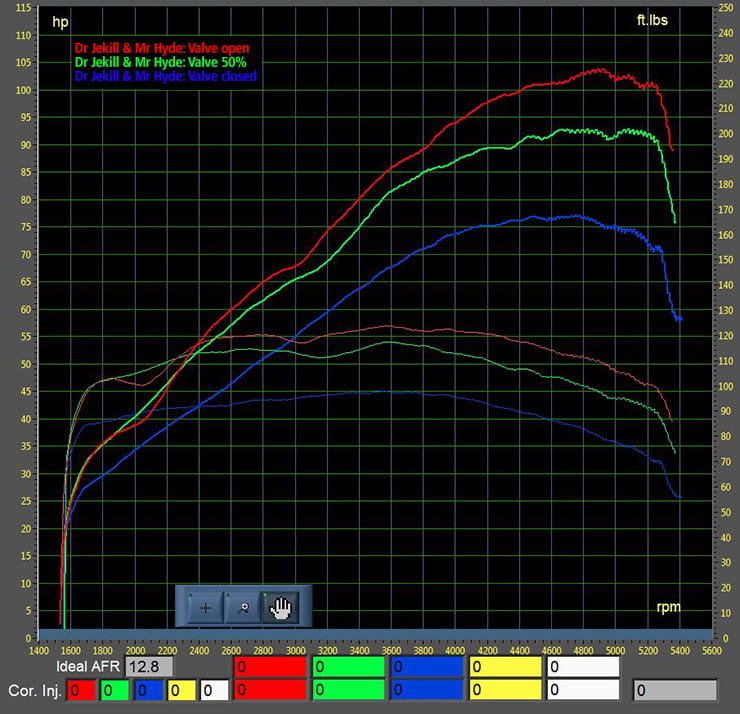 Dr Jekill & Mr Hyde has paid real attention to the small details – for instance, where the header meets the muffler the connectors are stepped instead of being the traditional straight connection. This design helps prevent gas leaks at the join, and air being sucked into the system, which can give your sensors incorrect values.

The company has also developed its own baffle material. It’s a similar fabric to that developed by NASA for heat shields and is woven from a single strand, as this doesn’t compact or degrade over time. Most exhausts get louder and discolour as little bits of fibre slowly work their way out, so you shouldn’t ever need to repack this. The valve unit is also made from a special tooling steel, which is nickel plated to protect from corrosion and has a higher melting point than typical metals.

The only issue I’ve had is that at one point, when riding in the rain, the valve started operating itself randomly. This turned out to be a design fault on the bike itself – water is thrown from the rear wheel into a gap, just where the valve’s electrical connector sits. I sealed it up and haven’t had any problems since, but I’ll be looking at a way of covering this gap. I guess it’s not an issue for the average H-D owner, who doesn’t usually ride in rain and snow storms…

So far I’m very pleased with the system and am looking forward to getting a new fuel map for a bit more performance, but to be honest I’m not really that concerned about the power – the sound has me sold. I know that my neighbours love it too.

Kane’s Harley on the dyno