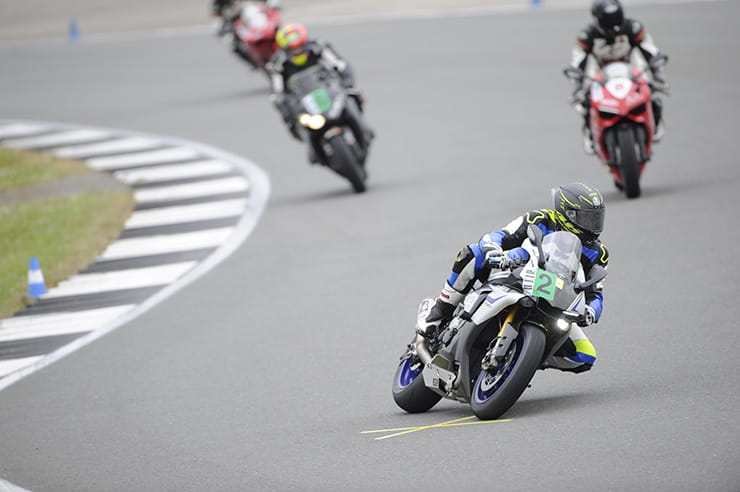 It’s never too late to go back to school, especially if it’s the California Superbike School! Founded by the legendary Keith Code in 1980, the school offers training in the art and technique of cornering. The step-by-step training builds and includes everything you need for safer, faster riding, offering the tools, theory and understanding – but best of all, practical experience – in a controlled environment where everyone is working on the same skills. It’s not the same as trying to learn to ride fast at a track day or following a buddy that tells you with confidence “just follow my line”.

Slowing down and practicing skills you need is the best way to learn. You have to go slow before you can speed up. And it works; some of the young talent the team has coached, has found its way to the Moto GP paddock. 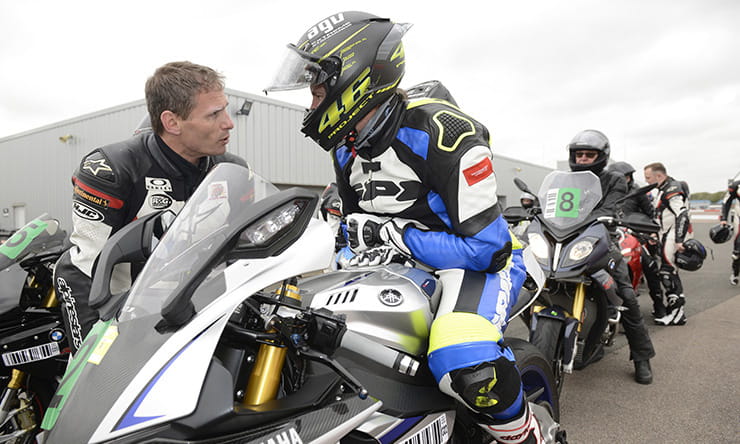 I took the CSS courses way back in 2003. At that time, as a racer, I was looking at everything that would shave time off my laps. I signed up for all four levels, had already read all the how-to guides, watched all the videos and read both of Keith Code’s books; Twist of the Wrist and The Soft Science of Road Racing Motorcycles. My racer friends laughed and said don’t waste your money! I had the last laugh, and all the skills I learned at the school were transferable to my road riding

Level One was based at Rockingham, and the classroom sessions were held in one of the pit garages. The first on-track exercise ‘throttle control’ has you riding only in fourth gear, and you don’t use brakes unless you really need to. They prefer you to use them rather than crash.

This slowing down gets you thinking about throttle control and corner entry speeds. It also forces you to slow down. You then work through drills on turning points, how to turn the bike quicker and later, what rider inputs are needed and where to look on the approach to the bend and on exit. All of these drills have benefits on track, but most importantly they all apply and make you much safer on the road.

Level Two through to Four build further skills and practice. There was a bike rigged with stabilisers that allowed you to explore the differences between braking dangerously hard with the back brake, and how much pressure you could use with the front to stop the bike in a safe, controlled manner (you could experience just how easy it was to lock the back wheel up using the back brake, especially in a stress situation). I learned a number of skills that fine-tuned my riding in the upper levels.

After completing the course initially, I was slower while I processed the extra information when riding. But in much the same way as you get overloaded while first learning to ride or drive, it very quickly all becomes second nature. I raced for a number of years, and after competing at the Isle of Man, my racing days were done. Since that time I’ve become lazy in my riding skills, and have picked up bad habits. I lost the drive to learn or develop. 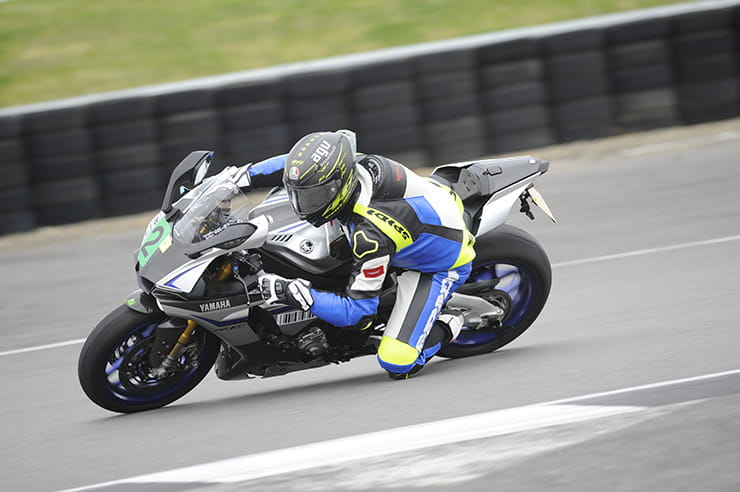 I’ve often referred people to the California Superbike School over the years. I’ve always shied away from people wanting to simply follow my line (on the road or on a track day),  explaining that they often don’t have the tools or understanding for all the steps taken.

I’d often fancied getting back to do Level One again myself, and after attending the school this week, I’d do it again. It’s that good! The school is currently based at Stowe at Silverstone, though you can attend at other tracks around the UK and overseas at certain dates.

I wasn’t sure what to expect after all this time, but what I found was a hugely professional school that has grown and developed over the years. The emphasis has moved from a something that develops racers, to one that develops all riders at every stage of their development. The instructors have all the answers to any questions. And they’ve been asked pretty much everything over the last 37 years.

The facilities at Stowe are first class, and safety is paramount. Bikes are subtly scrutinised and checked for anything that may be unsafe, with a mechanic on hand to help with any issues, and they’re happy to help with things like setting tyre pressures for the track. I was running Dunlop Sportsmart2Max tyres on the day.

Your helmet and leathers are checked, and gear is available for hire if there are any problems.  Plus you can hire a bike – how about a 959 Panigale for £365?

On track, coaches observe, demonstrate and give immediate feedback. My instructor picked up on my bad habits instantly; we had a quick word in pit lane and I was able to rectify straight away. Feedback was spot-on, and things instantly felt better. I realised that I needed discipline on track, and more importantly on the road. I have been inspired.

By repeating Level One, my understanding in the classroom was much better. I have not been slowing down on track for practice since 2003, and the first time round it was all new. This time I had a firmer grasp of what the instructors were talking about, and it was all reaffirmed.

You never stop learning; it’s never too late to go back to school. I am now ready for the next levels (again). Sign me up! 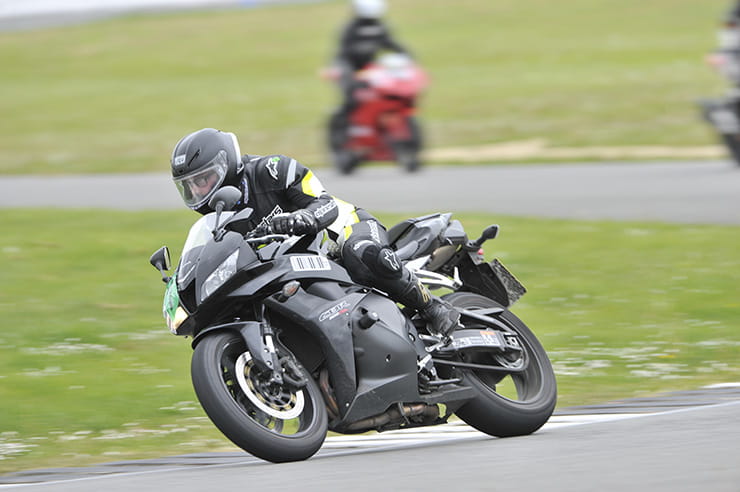 I am an over 40 weekend warrior. A sports bike rider. Sundays are my day of land crusades; hours on bikes roaming around the countryside, following (I’m not the fastest) my gang of fellow warriors.

I’ve had good coaching over the years from my mates, and participated in a few track days, but my knee sliders are still clean. Getting my elbow down is a distant dream. So with a little trepidation I found myself heading to the California Superbike School at Silverstone for a 7am start.

Dreams of fast acceleration, spark-flying knee scrapes and pack-jostling were dispersed within minutes of my arrival; this is not a track day! From the moment you arrive you feel relaxed; the team greets you at the sign in, organises your day, gives you bike stickers and even a bottle of water. You can tell this is going to be professional from the start.

With the safety talk and introductions over I met my instructor, who would be my shadow for the day. The course is about self-improvement, not racing. Everything is explained first in whiteboard lessons, before putting it into practice on the track. We covered the importance of control not aggression, then throttle control, then turn points, followed by quick turns, all of which were discussed in lessons before track time.

The twenty minute track sessions are where you really understand the professionalism of the set-up. Overtaking isn’t banned, but it is monitored – you’re advised to pull into the pits and slowly go through to give yourself space if a group is holding you up.

It’s learning about the bike, and how it gets you around corners. Straight lines are the bits that get you to them and are not of interest here. First session was fourth gear only, with no braking, which slows you right down as you try to prove to yourself that you don’t rely on your right hand. In the second session, it was still no brakes, but there were clearly marked entry turn points to practice, and things were already getting smoother. All the time I was being monitored by the instructor, who’d pull in front when he could see an improvement could be had, so I could follow his line until I got the thumbs up, before he’d pull back to help the other couple of riders he was shadowing.

After lunch was a lesson on quick turning, and we got told that brakes can be used lightly.

By track session four, people around me were already discussing their improvements. Hairpins were now fun. Sweeping lefts and rights were counter-steering pleasures. Even after session four, where we were made to do bird impressions in the name of input (you’ll see) we came away better for it.

And then it was the last session of the day; no free-for-all, but all gears and brakes, lines kept, turn points met and turning sharper, but we still had a lesson plan to follow. Finally, it was time for the debrief and the certificate.

70% is the rule; 70% of your capability is how they want you to ride, and by the end, I’d got it. Speed comes with knowledge, and this has taught me how to enter and leave a corner with more speed. But more importantly, with far more knowledge and confidence.

Would I recommend this? Well I’ve signed up for level two this summer…