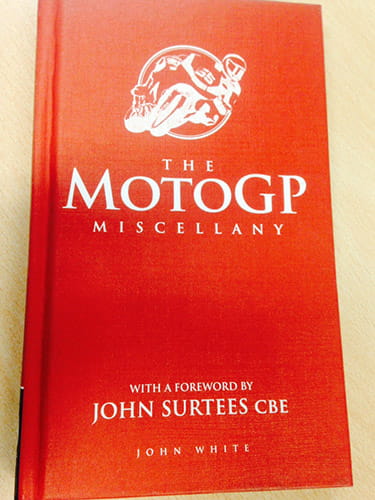 With the MotoGP season just around the corner, Carlton has brought out a new addition to its curious ‘miscellany’ series – The MotoGP Miscellany.

Like the sister publications that dive into topics such as the Tour de France and Olympic games, MotoGP Miscellany, as the title suggests, is 160 pages of quick fire facts and figures, often fairly random and not hugely structured. Factoids range from which bones Dani Pedrosa has broken to the career of Bruno Kneubuhler, and everything in between. For example, did you know that neither Giacomo Agostini or John Surtees ever finished third in a 500cc Grand Prix? Nope, neither did I.

Surtees himself provides the foreword and, in general, it’s a quirky and somewhat unstructured read, with an olde world almanac feel that gives it a certain charm. There are no pictures, just 50,000 words in a traditional serif font. This pocket sized book is mana from heaven for the type of bloke that sets those fiendish pub quizzes. It’s packed full of pub fodder so obscure you wouldn’t even think to ask Google and, although it’s hardly indispensable for most of us, at a penny under a tenner it’ll raise a smile on the faces of hardcore bike racing fans.

The MotoGP Miscellany is written by John White and is available from high street bookstores or online at www.carltonbooks.co.uk