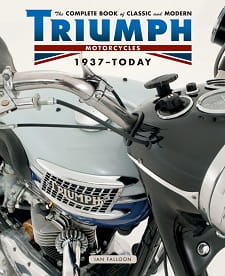 Kiwi author Ian Falloon has written over 30 authoritative motorcycle books, mostly historical, but also some restoration guides and is best known for his definitive works on Italian machines. However, of late he has covered some Japanese brands and has now completed his first work on a British manufacturer for the American publishing house, Motorbooks.

‘The Complete Book of Classic and Modern Triumph Motorcycles 1937 –Today’ starts at the point where Edward Turner took over as Managing Director and Chief Designer and took Triumph onto to become one of the most successful British manufacturers of the last century.

After a brief introduction to the company’s German heritage, Falloon works his way through significant time frames and model line-ups in the original Meriden firm’s history including their demise before continuing with the Hinckley resurrection and the brand new company and model line-up under the ownership of John Bloor.

The 256 page large coffee-table format book is liberally spread with original factory images and advertising images as well as some high quality images of restored machines and it is pleasure just to leaf through over a cup of coffee.

But, it should be noted that many of these appear to be of American specification models and anybody using these as reference for a restoration would be advised to check original factory shots unless it is US model they are bringing back to life. (In fairness much of the easy to read text does mention differences between the UK home models and any export versions.)

All of the major and minor models are covered, with an emphasis on the most exemplary, era-defining motorcycles such as the Thunderbird, Tiger, Trophy, Bonneville, and new machines such as the Speed Triple, Thruxton, and Daytona 675. It also features important non-production models and non-factory racing and speed-record-setting motorcycles that have become parts of Triumph's history.

The book has sufficient information for anybody looking to date various machines, although there are no detailed appendices at the rear of the book and no information is given on frame numbers etc.  Real devotees of the marque will of course already have many volumes already sitting on the shelf giving such in-depth “anorak” information and may find the book a little lightweight for their tastes.

However, anybody looking for a general read through the Triumph history time line which is right up to date will find this a useful tome to have on the bookshelf , or for that matter on the coffee table for visitors to browse through.  It is a weighty, quality publication and well worth the £35.00 cover price, especially if you are starting to build up a reference library.

Available from all good bookshops or direct from www.motorbooks.com