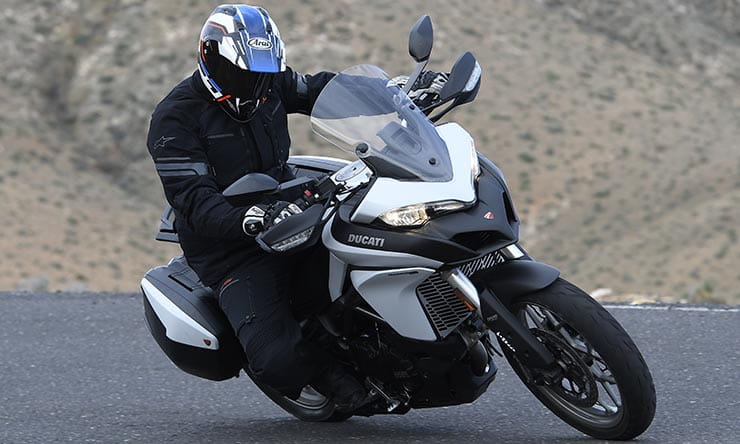 And in my experience with it so far I have to say that, due to its amazing, multi-layer versatility and impressive quality, it really is the only textile clothing you’ll ever need.

In short: if you want a thick, ultra-warm, weatherproof jacket that’ll keep you toasty right into the very depths of winter, the Valparaiso 2 is it. But, just as impressively, if you also want a jacket that can also be cool enough to wear, sweat-free, in over 20 degrees, the Valparaiso 2, once you’ve stripped out not one, but TWO clever inner layers and opened up all the venting panels and systems, does that as well. To be blunt: this really is the suit for all seasons.

I decided to try it out at the end of summer after my pair of (very) old Alpinestars textile trousers finally started to split after around a decade of fairly hard use. And knowing I’d need something as versatile as possible, decided to go for the whole new Varaparaiso 2 combination. I wanted fairly subdued colours so went for the darkest of the three jacket options, black/grey/red (dark grey/black/red and light grey/black/red are also available, see pictures) with matching black/grey trousers (one alternate trouser colourscheme is available, light grey/black/red). Sizes, meanwhile, range from Small all the way up to 4XL and, seeing as I’m 6’3” with a 38” waist went for the 2XL option, which fitted perfectly.

For my first major test I needed it to be as cool as possible as I wore it at Ducati’s recent launch of its new Multistrada 950, which took place in Fuerteventura, which meant that, despite it being December, temperatures were still in the low to mid-‘20s.

To achieve that, I stripped out both the thick quilted jacket liner and the thinner rain-proofing Drystar liner. This is easily done in a couple of minutes via zips and poppers and once done, you’re not only left with a relatively lightweight, summer textile jacket complete with CE armour protection in back, elbows and shoulders (all of which, again, is easily removable) but you also have the two liners which can also be worn separately as casual jackets either individually or zipped together. Yes, you really do get three jackets in one.

And in this ‘summer spec’ the new Valparaiso certainly impressed. Fit is excellent, as is the quality. Not just the waist but the sleeves, as well, can be ‘tapered down’ with easy-to-use adjusting straps. There’s plenty of pockets both inside and out and, perhaps best of all, there’s a large variety of different, adjustable venting systems so you can fine-tune how much cooling air gets through according to the conditions. There’s not just the expected 6.5inch long zippered vents on each arm, there’s two more 10inch versions on the back plus, best of all, two large flaps on the chest which can be unzipped or, in the hottest conditions folded over and poppered-in to position to reveal two large vents which let plenty of draught in.

The trousers have a similar zip and flap arrangement, and are similarly effective. You’d never expect such an initially bulky looking suit could be so cool in summer conditions. I was won over.

Better yet, however, was how warm and effective the Valparaiso proved when back home in chilly old Britain with the warming quilt and rain-cheating Drystar layers zipped and poppered back in. Inevitably, perhaps, it takes a little longer to re-attach the layers but it’s still not that much of a bind, especially as most people will only be doing it a couple of times a year. Once done, though – and though, admittedly, a little bulky – it does perform impressively well. So much so, in fact, on my various winter errands in and around Peterborough, I’ve only ever needed to have a T-shirt and thin fleece on underneath. Admittedly I’ve not yet done a 150 mile-plus winter journey in it, nor had to brave anything other than a fairly light shower (to be honest, this time of year, if I need to brave sustained rain or prolonged extreme cold, I ain’t going on the bike), but I’ve also not reason to doubt, on the basis of previous satisfied experiences with Alpinestars’ textiles, that the Valparaiso will be anything less than excellent.

No, at £349.99 for the jacket and £229.99 for the trousers, the new Valparaiso suit isn’t cheap. The best never is. But what really swings it for me is two things: first, it’s quality, not just in how well made it is but how well designed and tailored it is as well – everything fits, is present and correct and is easy to use. And second, and more impressively still, just how versatile it is. As I said earlier, this is a true all-season combo and hugely versatile. I expect it’ll do me for the next five years. And with that in mind, that price is actually pretty good value, after all.