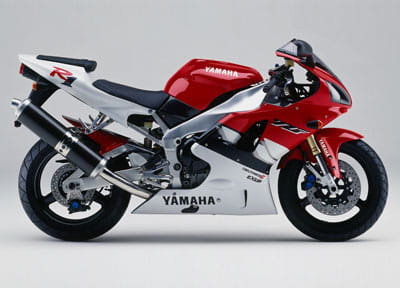 In 1998, Yamaha’s R1 was a direct adrenaline shot to the heart. Honda’s FireBlade had been top dog for so long it appeared the remaining manufacturers had simply given up on the big-bore sports class. But then the R1 appeared and nobody could believe Yamaha could produce a bike that was capable of a true 168mph and also clocking standing start quarter mile times in 10.38 seconds – by anyone who cared to give the Yamaha its head from standstill. A landmark motorcycle? Oh yes.

Needles to say the R1 was – and still is – a wheelie monster. With a genuine 130bhp at the rear wheel in stock trim, and a lightweight 175kg dry weight, the R1 was built to appease fans who had been raised on a diet of headbanger-like Yamaha two-strokes. It also provided ammunition to the hoards of club racers who simply wanted power and agility.

Yamaha knew exactly what the R1 was capable of and even gave the R1 long-stroke fork action to try and counteract the fact the bike wanted to loft its front wheel in first and second gear. It was a token gesture. The R1 also came with a new breed of transmission that other manufacturers soon picked up on. The gearbox was tri-stacked, meaning the crankshaft, gearbox input, and output shafts were offset to reduce the engine length in order to gain a longer swingarm but also reduce the wheelbase for race-like steering. It worked.

Even today the original R1 is a stunning bike. Its performance is still a potent force to be reckoned with and the bare aluminium frame and Yamaha Grand Prix bike styling is still head-turning. The one serious problem the R1 suffered from in its early days is  that it was a like a Christmas tree – everybody wanted to put tacky trinkets on it. From gold-plated engine cases to blue-tinted headlight covers and cheap yellow anodised fasteners, an R1 owner could have it all. And trying to find a clean, decent standard one today is almost impossible.

- points – was one of the most ‘nickable’ bikes ever so check paperwork and engine/frame numbers carefully. Engines with over 20k miles often need a top end refresh