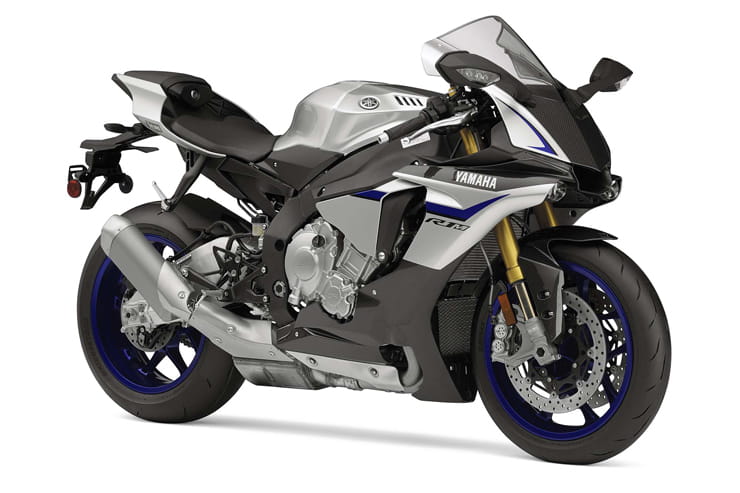 The YZF-R1M is a limited edition race and track bike that is equipped with advanced electronic control technologies and is only available via online application. To order one you have to a website to register your interest, before your local dealer rolls out the red carpet and invites you to come in and sign on the dotted line.

The first batch sold out quickly in 2015 initially bikes were allocated by country, there were 75 and they sold out in less than an hour. Last year the bikes were made available in Europe on a first come first serve basis pool which meant more opportunity for the UK, we got 175 and these sold in hours. The process is the same this year and the website is open to applications now.

Once you have paid your deposit you are given an invitation to the Yamaha Racing Experience either at Mugello or Silverstone. Some may dismiss this as an R1M track day, some thought was a nice gesture, but little more than that. The invite also offered a night’s accommodation, track instruction and a free t-shirt. 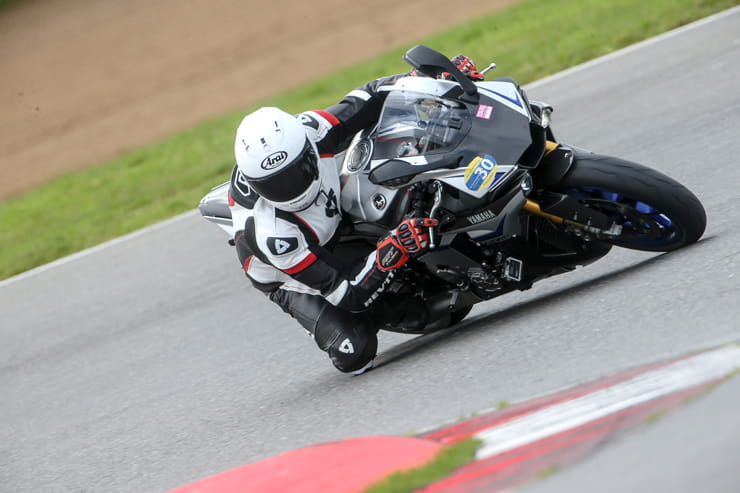 The Yamaha YZF-R1M ticks all the boxes...and then some.

The Yamaha Racing Experience is a time to learn all about the machine, the track and the best way to prepare. The R1M is a very sophisticated bit of kit, and Yamaha is very enthusiastic that owners get the most out of their machines.

Last year there were sessions from Yamaha’s WSB team boss Paul Denning who gave an overview of the bike and how close it is to the WSB race bike. There was a session from the suspension expert Byron Draper from Öhlins, after explaining the finer point she was on hand to help owners fine tune their set up. There are sessions on tyres and how to get the best from the apps that interact with the bike. You are put up in a nice hotel and there is a gala dinner. Last year to name but a few the likes of sat on tables chatting with owners were the likes of Bradley Smith, Alex Lowes, Sylvain Guintoli, Andrew Pitt, Niall Mackenzie and Steve Plater. You got a full day on track with your guest instructor that may have been any of the above.

I tested the 2015 R1 and the R1M, as Mr. Remington said ‘’I liked it so much I bought the company’’ ok so the budget never went that far but I bought the R1M. I will be running this bike as a long termer this year and will post updates. So what makes the R1M so special.

The first thing you notice about this higher-spec version of the R1 is the colour scheme, which Yamaha names ‘carbon’ and the rest of us might think of as ‘silver’.

Otherwise, at first glance the R1M looks similar to the R1. But only for a moment. Then you notice the front mudguard, fairing and tail centre is carbon. And you can’t miss the beautiful brushed finish of the aluminum tank. The contrasting blue wheels are lightweight magnesium, making for turning precision.

The defining difference is that the R1M comes with semi-active Öhlins suspension front and rear, which automatically adjusts damping to riding conditions. It can also adjust the compression and rebound as you ride. The base model R1 has a fully-adjustable KYB shock and upside-down fork.

Like the R1, the R1M is compact, with aggressive geometry which is perfect for the track and fast road riding. The steering is light and responsive. It’s lighter, narrower and shorter than previous R1s. The brakes are surprising as they are sharp and powerful. I was not expecting this from a bike not shod with large bore Brembo braking.

Both bikes have huge easy-to-use power. They have a MotoGP-derived electronics package, including riding modes, traction control, slide control, launch control and wheelie rate-of-lift control. We’re talking just-about-everything control. All the electronic settings can be stored and amended from apps downloaded to smart phone or tablet.

Data logging from the bike transferred to your tablet allows for full analysis of everything from throttle position, braking and lean angle. This can be seen in graph form and placed on a lap by lap comparison. (Easy for you to see where you can brake later or get on the gas quicker, on paper anyway)

When I first tested the bikes I felt that there was very little you would want or need to add to the fully-stacked R1M. Since then I have seen bikes with trick bits including rearrests and aftermarket exhaust systems.

The standard system is subtle, but gives out a lovely tone when you rev the bike. With the large (visible) catalytic converter you lose some of the potential. (I will be exploring performance systems that offer the power but also pass the track sound test)

The suspension is easy to adjust. It comes with two factory pre-set options, one for track and one for the road. Then there are two options to program your own manual settings. On the road I used the road setting and the bike felt well set-up and handled excellently, although the suspension settings may have been a bit hard for some. Selecting a slightly softer ride is straightforward while leaving all the other settings as they are.

On track I switched to manual mode and did a session with automatic suspension adjustment set to zero, a simple matter of clicking a button and turning a dial.  I then changed to the road mode for a session, followed by track mode.

The bike worked well in each but improved as the semi-active suspension took over and ironed out little shakes and wobbles under heavy braking and acceleration. It tightened everything up in corners.

The semi-active Öhlins seems well worth the difference in price between the R1 and R1M all on its own. The suspension takes the bike to the next level.

The electronics package is superlative. You can access your own customs settings with quick shortcuts. You can toggle between settings on the move. You can also toggle and tweak power delivery options, traction control and slide control on the move.

Like the R1, the R1M uses a six-way inertial measurement unit with an internal gyro. In plainer terms, that means the bike can detect the lean angle, acceleration and pitch. The level of intervention from traction and slide control adapts accordingly, using wheel speed sensors to monitor spin, sideways slide and locking. Yamaha’s Unified Brake System adds a bit of rear anchor when the front is applied, and uses the IMU to adapt to lean. The KYB calipers offer great feedback and as much power as Brembos. (I am planning to test the differences using various pads, and I will substitute the KYB for a big bore Brembo Master cylinder for comparison in the, upcoming updates)

I enjoyed using the rate of lift control on track when I had my head down, then dialing it back when I wanted to have a bit of fun exiting corners. The traction control allowed the front to begin lifting before the bike was standing up, an immense grin generator. Controlled slides out of corners are permitted too. (you have the option to turn lift control off where you might want the front to lift, for example on the mountain at Cadwell) 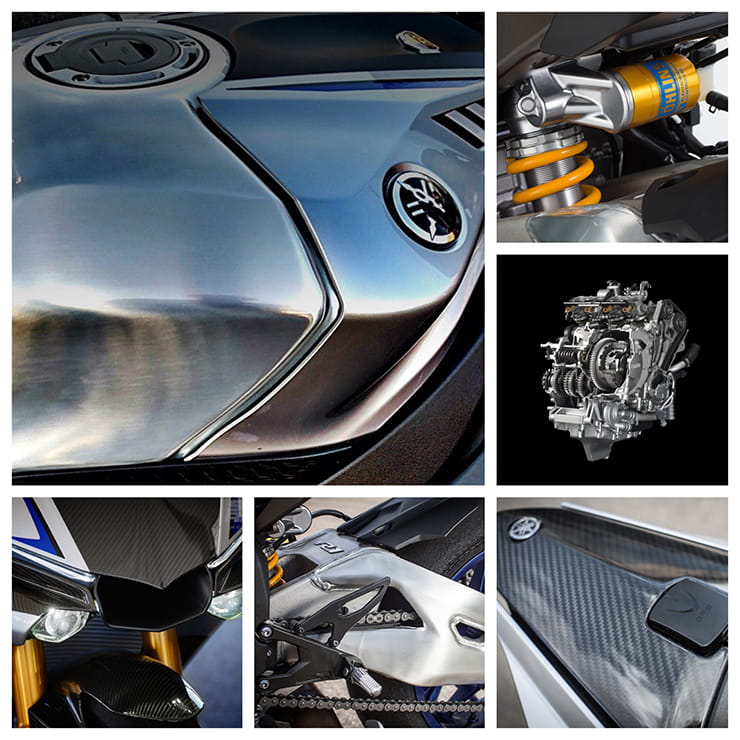 The rider aids are not intrusive – they just turn you into a riding legend while most of the time being unaware of the work they’re doing. The software makes 125 calculations per second to keep you rubber side up. It gave me the confidence to get really hard on the gas just after turning in.

The electronics package is not far off the M1 MotoGP bike’s according to Yamaha, except the MotoGP bike can be programmed to behave differently in specific corners.

Little touches on the R1M made me smile. I left home in the dark on the morning of my track test. The dash display had a black background. As I rode, the sun came up over the mist-covered fields. When the sun reached the bike the display background changed to white.

The R1M has a 200-section rear tyre where the R1’s is a 190. Both offer grip, drive and stability but the 200 offers slightly more contact patch.

At the time on Snetterton’s 300 circuit, the R1M had the edge over everything else on the straights, and all the main competitors were present. Now that there are more R1’s on the track its not as easy as it was 18 months ago.

With the right rider on-board, the R1M has the edge in the corners too. They fire out of corners with the electronics doing their thing. You can very easily lay down rubber on the exist with the slide control doing just enough.

It’s astonishingly fast everywhere. It feels and handles like a 600 on track and on the road. The stability in corners allows you to explore extreme lean angles – I managed to ground my fairing-mounted camera.

First gear is so tall that a lot of the time it’s all you need. It’s like a 200hp twist-and-go. Corner-to-corner, I was only using two gears with an occasional short-shift.

But it’s so fast that on the long Snet straights the rev limiter arrived almost before I could change up using the factory quick-shifter, which makes changes almost seamless. My peripheral vision felt blurred, and approaching corners felt like the ground rushing to meet you in a skydive.

Open the throttle and bikes ahead appear to be rushing backward.

Above 8,000rpm is where the afterburners kick in and you break the sound barrier. The R1 tended to lift and shake its head a little during that top-end power rush. With the R1M there was no wobble at all, even when I knew the front was off the ground. With the wheel off centre on a little ridge on the track, it was still completely solid. The Öhlins was doing everything necessary to keep the missile in line.

On the road, in London rush-hour traffic, the bike was still an absolute pleasure. Its lightweight handling had me filtering with ease. I could easily tuck in behind the 125s and scooters. The mirrors are really well placed to see behind you and easy to fold back to squeeze through gaps.

On rough surfaces A roads I just toggled back on the suspension settings (on the move) which made an instant change and smoothed the bumps out which was great for my old back.

The bike is smooth at low speed and all the way through the rev range. On faster roads its flexible mid-range and aggressive peak are conducive to smooth progress.

Even with the power turned up the bike was smooth and comfortable. Cruising in a high gear it felt very civilised, while dropping a gear teleported me out in front of the traffic.

With the power map set on level two, everything is subtler. The throttle response is much more sedate, feeding in the drive smoothly. Power-delivery is softer, more suited to traffic.

But this bike can still bite, and opening the throttle requires forward planning.

I took the R1M to two biker cafés, and at both it quickly drew a crowd. There was a lot of interest at the track too.

The R1M is as close to a production MotoGP-spec Yamaha as one can buy so if you fancy yourself as the next Track Day version of Valentino Rossi then get your cheque book out with a figure of £19,399 in mind. 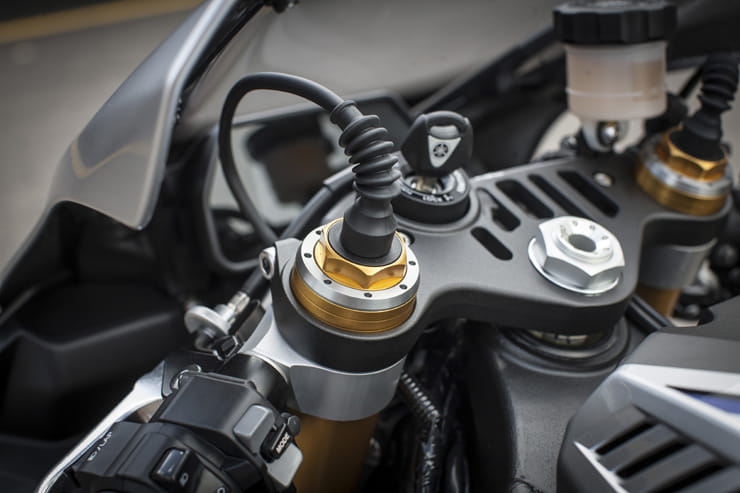 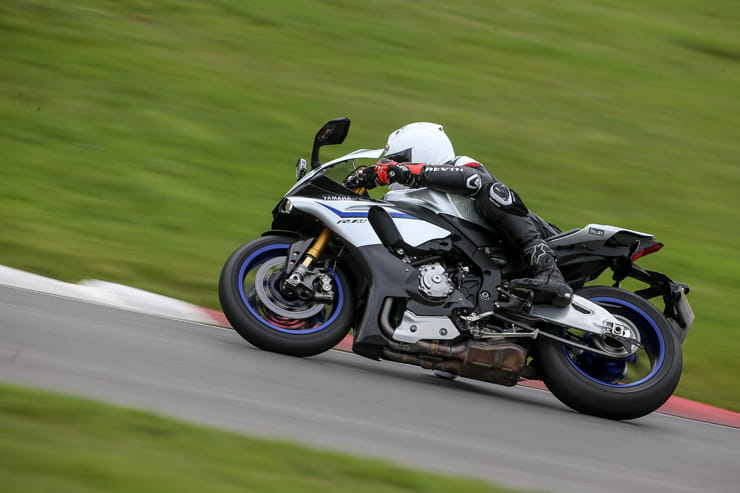 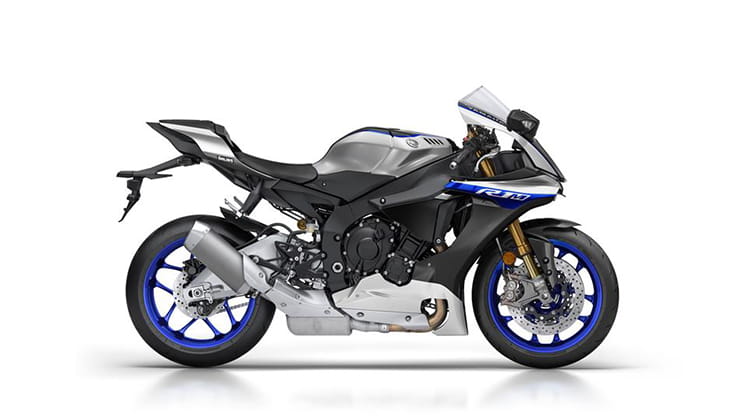