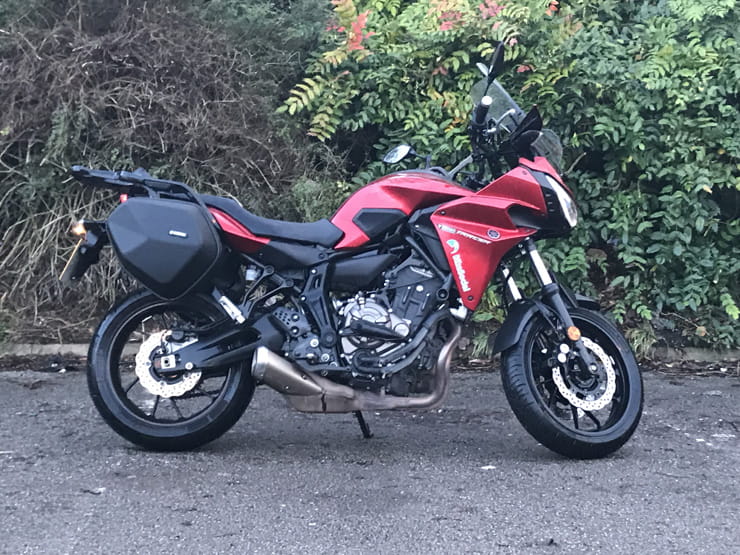 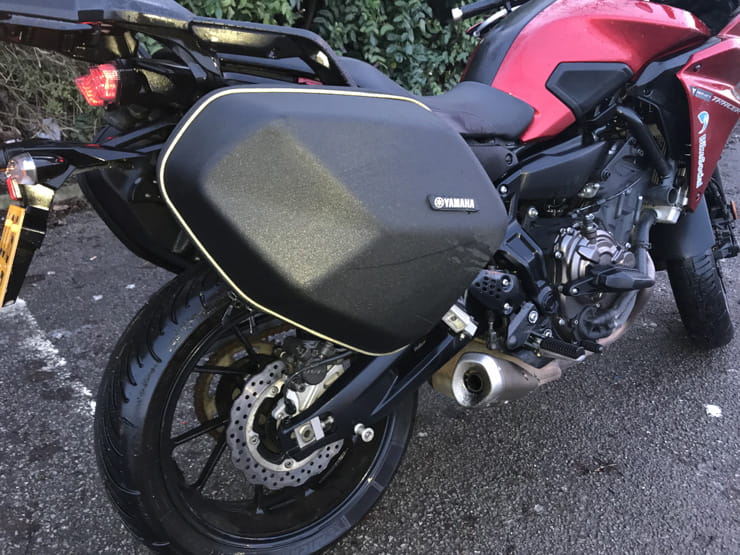 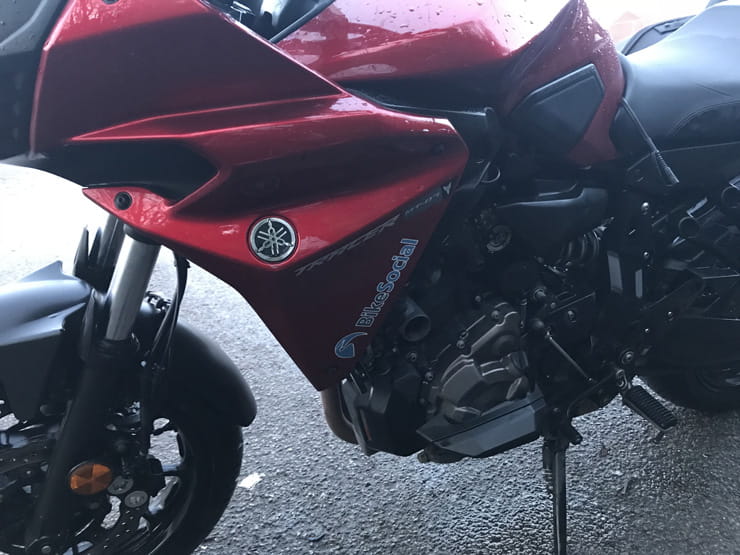 It’s fair to say that having spent around 4500 miles on the Tracer 700 this year, the two of us have been getting along swimmingly. It’s like the perfect relationship – but with a bike, is that weird? No seriously! I’ve ridden some lovely machines this year, and I’m not going to say that none of the others have pulled at my heart-strings, but no other bike has been the all-round bike that the Yamaha is.

So, the honeymoon period continues… until last week. Wheeling the bike out to take a trip to the shops for some of life’s necessities, turned around to lock everything back up again and I hear a crash from behind me. “That’s not my bike.” I actually thought a wheelie bin had been swept down the road in the 70mph gusts. I was wrong, it was the Yamaha. 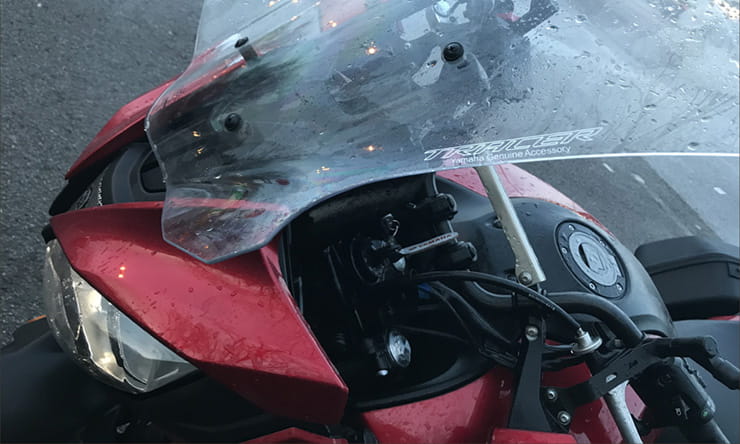 It's really sad seeing a bike on its side, kind of like a fish that’s been beached by a receding tide. The glum feeling that had washed over me was quickly replaced by a thought of “S**T, that’s not my bike!” Running over I adopted the technique of picking up a bike I saw McGregor and Boorman do many times on the Longway Down: Pull the bottom handlebar into the stop and lift with you knees. Not sure if it was adrenalin or an A1 technique but it took surprisingly little effort to get the bike righted again – why do the guys in MotoGP make it look so hard?!

Okay, first things first, SIT-REP! So the front break lever is bent through 180°, It’s still useable mind; the bend occurs past where my little finger sits on the lever. It’s better to replace it though; the fall could have weakened the lever in some way. I might risk it if it’s a clutch leaver but brakes are quite important. Bar-end, again a small scuff to the aluminium but it’s barely noticable. Indicators, normally the first thing to go in a situation such as this but they are unscathed. Upper fairing sides, intact and unblemished! 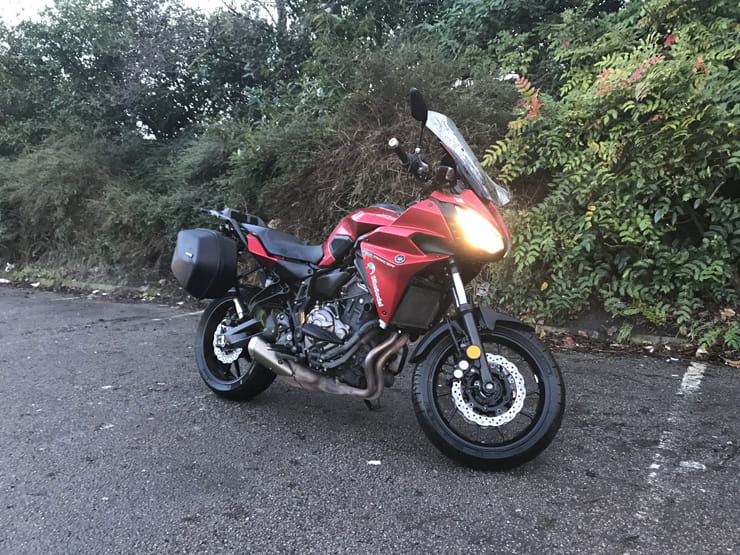 And the reason for such little damage? Yamaha’s option engine protectors! The design of the engine protector is not like anything I have seen before. They don’t envelop the crankcase like a clamshell but sit across it like a kind of plastic roll cage. The other clever design is that protrude about 2.5-inches out meaning that the fragile easily broken bits of the bike, even when lying on its side, aren’t touching the road. 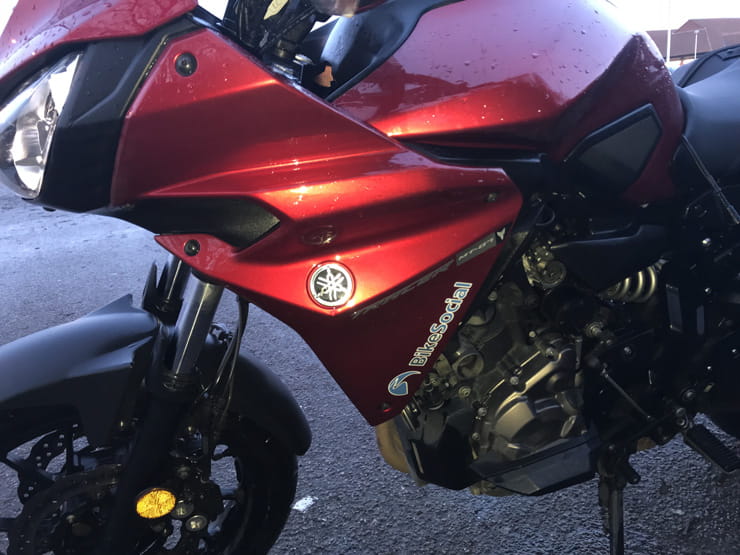 Of course this was a static incident; the outcome could have been very different had the bike been sliding down a road but, I fully believe that the crash protection in this situation may have saved a potential insurance claim or having to by replacement parts myself.

Aside from the crash protection there are some other additions to the Tracer that have made hacking through rubbish weather that little bit more bearable! The Yamaha aftermarket screen is fantastic. I'm 5'7" and on its lowest setting it still provides enough of a bubble to cower behind when the weather becomes, well British! The heated grips, although not the warmest I have encountered, do keep the cold out when paired with my Furygan winter gloves. I'm sure that the small hand guards also help shield your hands from the biting cold.

On the downside the lights are below par which led me to fit a set of Osram H7 Intense bulbs. The difference is phenomenal! For about £15 you can pick a set up and although they are not going to last as long as a set of OEM bulbs, high intensity bulbs burn hotter and burn-out sooner than standard bulbs, but its a small price to pay for having such an improved spread of light.

So, I guess you could say that the honeymoon period is still on then, we just had a minor tiff. A couple of days and I’m sure it’ll all be forgotten about... 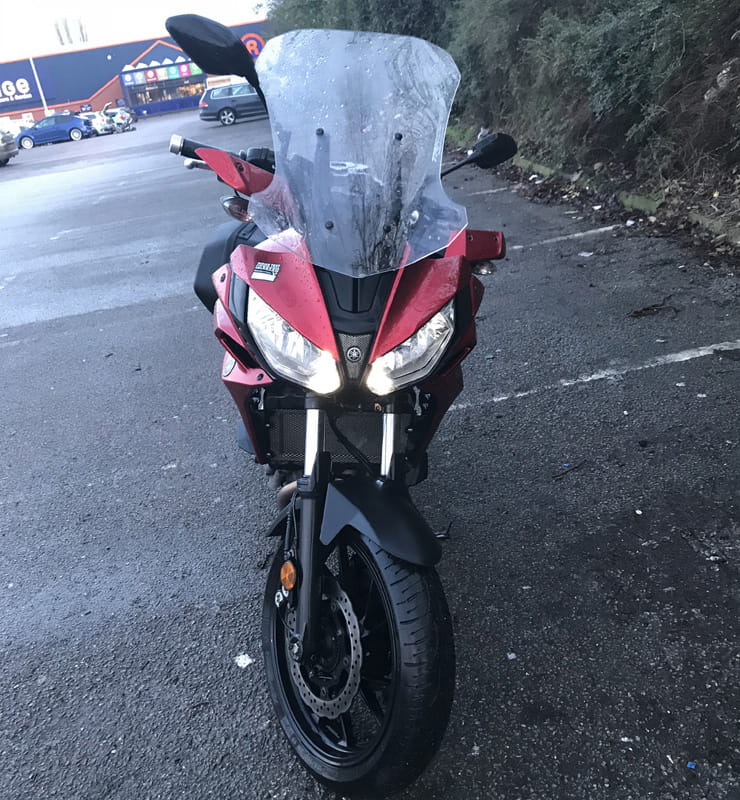