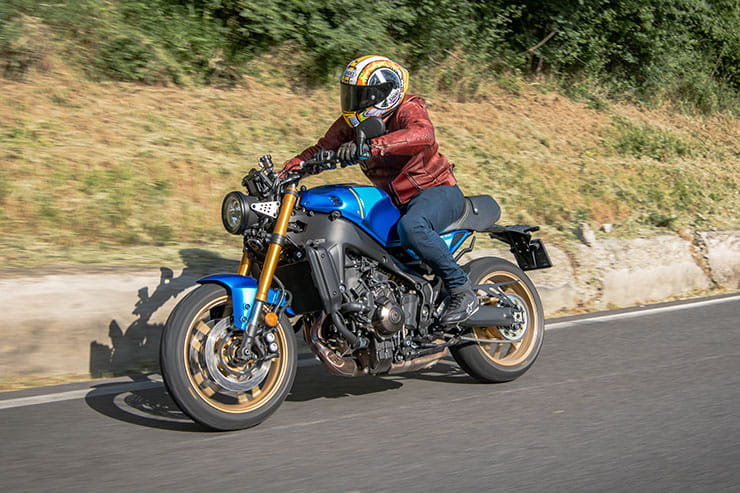 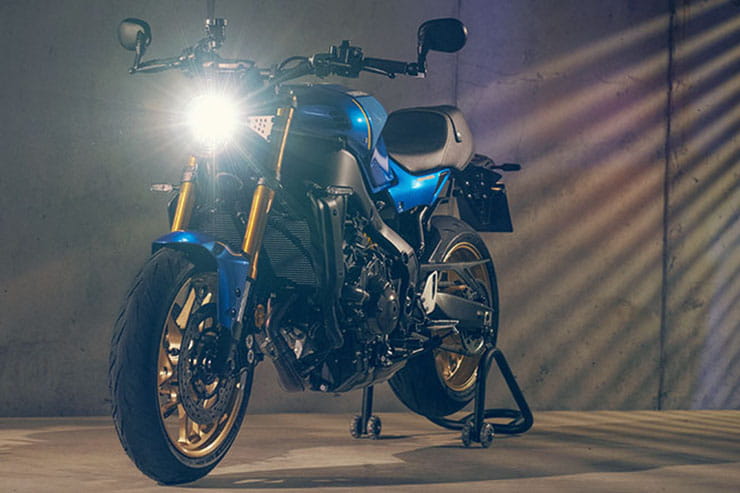 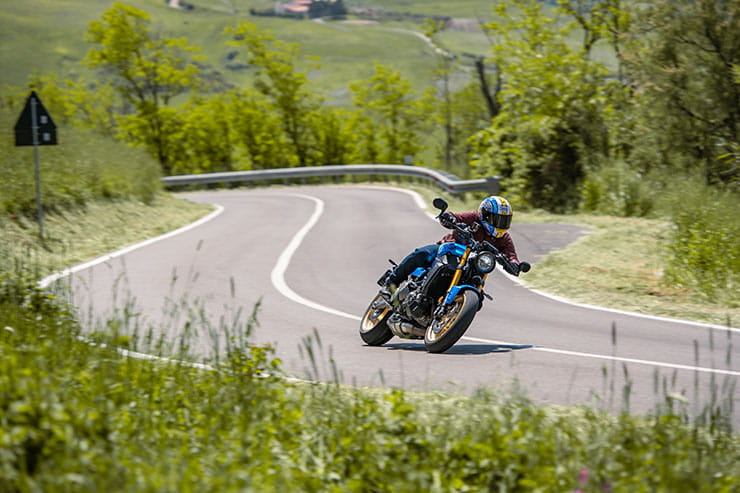 For those of a certain age, the new Yamaha XSR900, with its late 1980s and early 1990s design cues, rekindles memories and emotions strong enough to send tingles down the spine. I fondly remember Yamaha’s TZR250 with its Deltabox frame ­– just like the one on Sarron’s GP 500 YZR… ish. Friends rode early FZR1000s and, at 19, I piloted an imported FZR750 Genesis with a polished Deltabox frame. These Yamahas, with their long, flat tanks and distinctive twin-spar frames, were the bikes of my youth and at the heart of the world biking 30 or more years gone.

But the XSR900 isn’t a cosmetic upgrade or simply an MT-09 with new clothes trying to pull a few old heart strings; engine aside this is a completely new motorcycle with a new frame, suspension and much-needed lean-sensitive rider aids. The CP3, 117bhp triple engine is transferred from the MT-09 but much else is bespoke to the XSR900, including new forks and shock to (compensate for a longer swing-arm). A new 6-axis IMU ensures cornering ABS, traction control, slide control, and wheelie control. Plus, there are three riding modes, four power modes, an up and down quickshifter, and even cruise control as standard. We headed to Tuscany in Italy to ride this very modern middleweight naked retro. 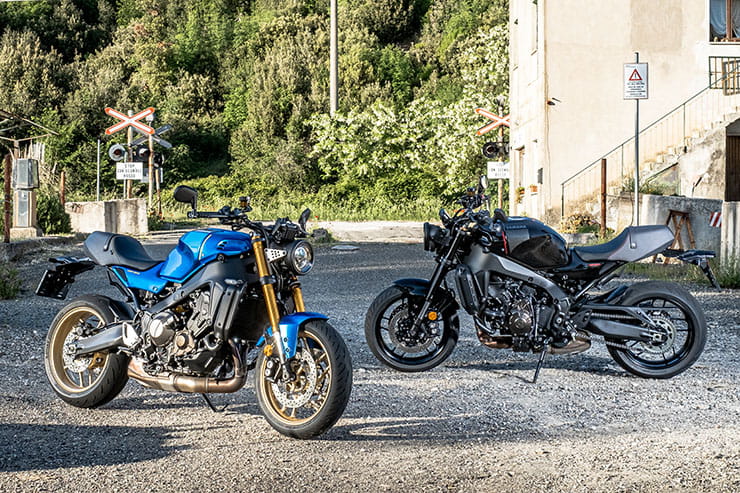 If you wanted a retro Japanese equivalent, the closest is Kawasaki’s Z900RS, starting at £11,129, or the 50th Anniversary model (£11,729). It makes slightly less power than the Yamaha, is heavier and lacks the same level of tech. You could also look at Ducati’s Monster, another desirable naked with similar power (£10,895) or even Triumph’s 1200cc Speed Twin at £11,095, which is far heavier as well as more expensive. At just over £10k the XSR900 is looking tempting on price alone.

The CP3 three-cylinder engine is taken directly from the MT-09 and makes the same 117bhp @ 10,000rpm and 69 lb-ft of torque at 7000rpm. Flexible, proportional, engaging – it’s an excellent engine platform.

The latest Euro-5 incarnation was treated to a significant upgrade, taking capacity up to 889cc from 846cc via a 3mm longer stroke, and is 1.7kg lighter. Compared to the previous XSR900, the new bike has 6% more peak torque, 3% more peak power and, according to Yamaha, is more fuel-efficient by 9%. 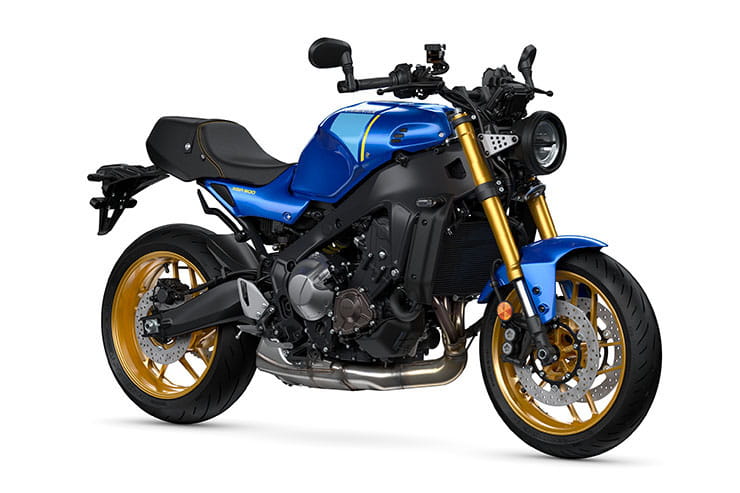 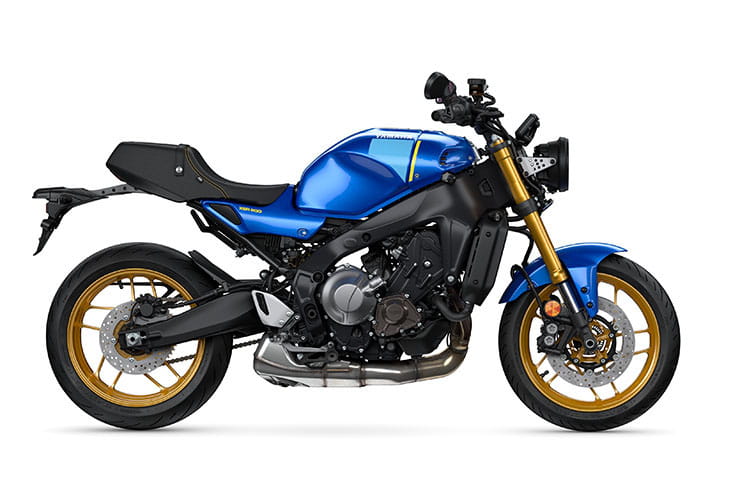 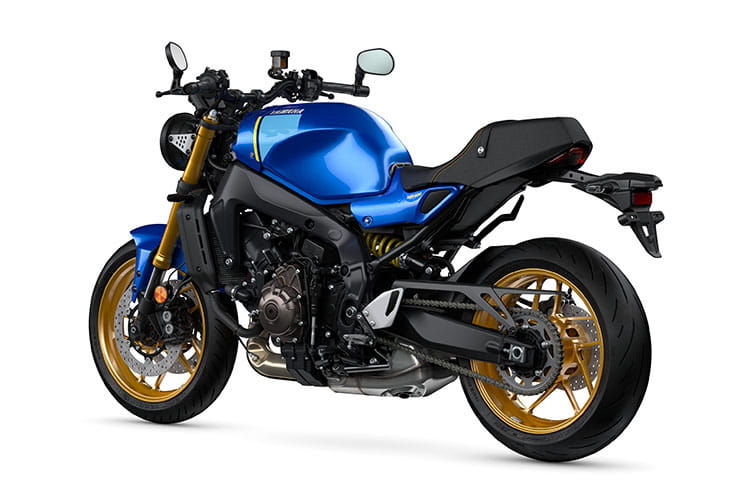 There’s a distinctive three-cylinder bark to the XSR900. Not so much from the (slightly ugly) exhaust; more an induction snarl when you open the fly-by-wire throttle that injects genuine character often absent on retro Japanese bikes. In tunnels especially, I couldn’t resist holding onto the revs for a fraction longer than needed purely to get an acoustic hit from the XSR.

Riding mode 1 is the sporty one and, with engine power automatically set to max, a little sharp. Some riders may enjoy the snappy throttle response but for me it’s too snatchy, especially for the road. I much prefer the softer throttle found in mode 2, which is forgiving and usable and complements the willing character of the XSR.

If you want to soften the fuelling further, you can dive into the menu via the familiar Yamaha wheel-and-switchgear and opt for ‘power 3’ which is ideal for town work. Power 4, however, is so slow and puny it feels like the throttle is on an elastic band. For 90% of the test, I opted for throttle map 2.

None of these options were available on the older model and, for many riders, the ability to personalise the throttle, power delivery and rider aids to how you want to ride will be a major draw. They work smoothly in the background during spirited riding (and even allow a wheelie – on track, of course), adding to the fun, not reducing it. The only niggle is lift control and slide control can only be deactivated at a standstill, and not while riding.

In a world where 200bhp motorcycles have become normalised, I never once felt short-changed by the CP3’s relatively modest 117bhp. When it wants to be this is one quick motorcycle, characterised by totally usable power and a rich seam of torque as well as the gravelly nature of Yamaha’s triple. On the road, in a naked chassis, it’s an almost-perfect balance; a blend of punch, arm straightening acceleration and easy manners. Away from the racetrack, you don’t need anything more. 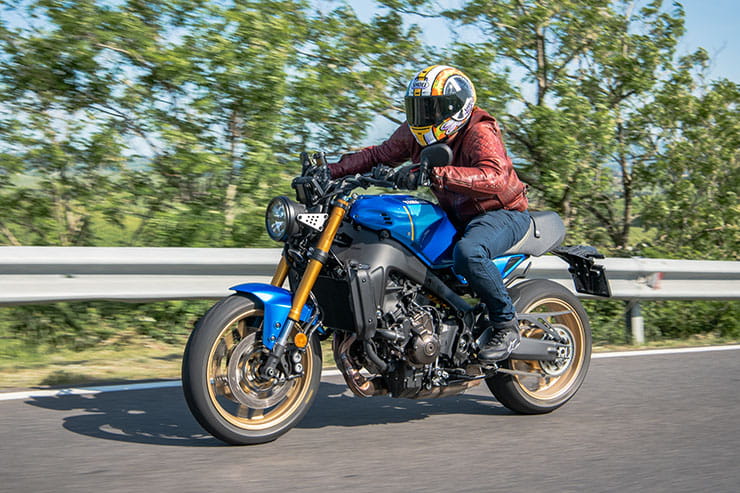 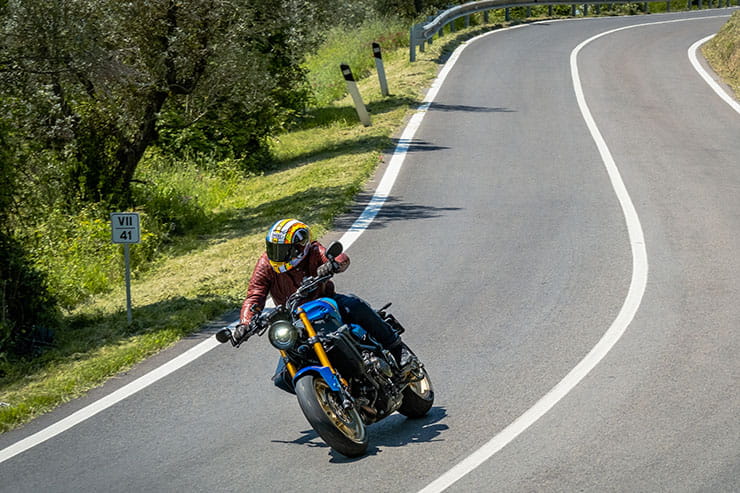 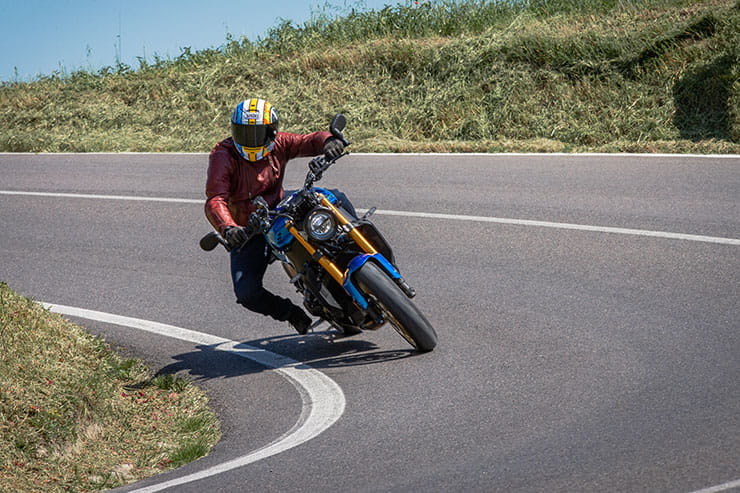 There are significant differences between the new XSR and the previous model, and that starts with a new aluminium frame, which is 2.3kg lighter and 50% more rigid. A new swing-arm is stiffer and 59mm longer, delivering a longer 1495mm wheelbase that’s 55mm longer than on the old bike.

The primary reason for the longer wheelbase and swing-arm is to allow the rider to be re-positioned further back in the chassis to accommodate a longer, flatter retro fuel tank. The new swing-arm’s extra leverage also makes the shock work harder so that gets a stiffer spring and more damping, while the headstock is lowered 30mm to keep the steering sharp. The 2022 XSR runs shorter front forks but with more flex but the same 130mm of travel. Rake and trail are the same as the MT-09 but the wheels are lighter, again helping the bike to steer. Adjustable pegs are set further back, and the rider is pitched a 14mm forwards and sits 20mm lower than on the previous XSR.

On the road, it’s obvious that Yamaha has worked hard on the balance of the bike. Stability is excellent, even when ridden hard. The Bridgestone S22 rubber and chassis provide excellent grip and feel, meaning rolling into corners is progressive and easy. You flow with the XSR, it’s very much an easy-going road bike with a chassis that translates simply and directly to the rider, via flex and movement from the chassis and suspension. Just jump on the thing and ride it (like it’s 1990).

We rode on a wide variety of surfaces – from smooth to bumpy, town to fast – and it was hard to fault the factory set up. My guess is that 90% of riders will jump on and never think about twiddling their settings. However... Your tester is as finnicky as the Princess and the Pea and on the odd occasion the front forks felt a little harsh. Thankfully, full adjustment forks is available so some riders may prefer to dial in a slightly softer setup, especially as the XSR turns most sweetly with the forks in compression. The rear, meanwhile, is soft and forgiving, offering great feedback, but heavier riders or those who fit more track-focused rubber and take to the track will want to add a little bit more support. 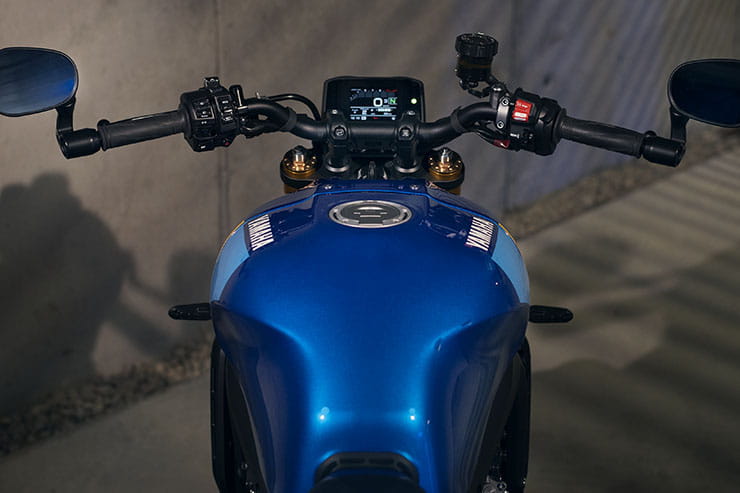 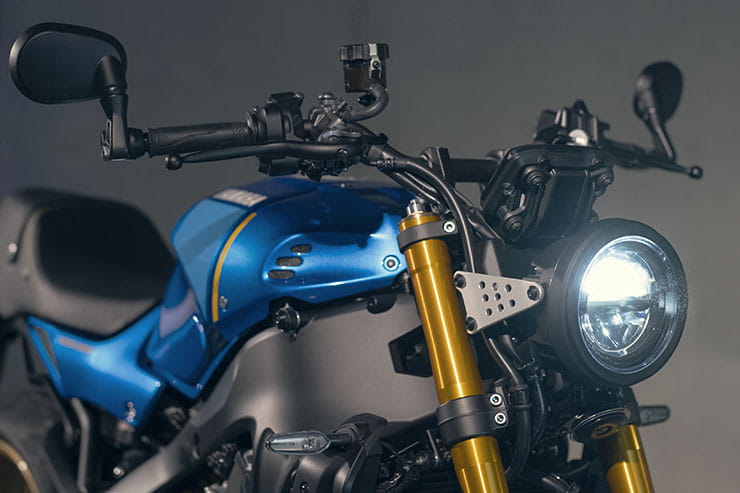 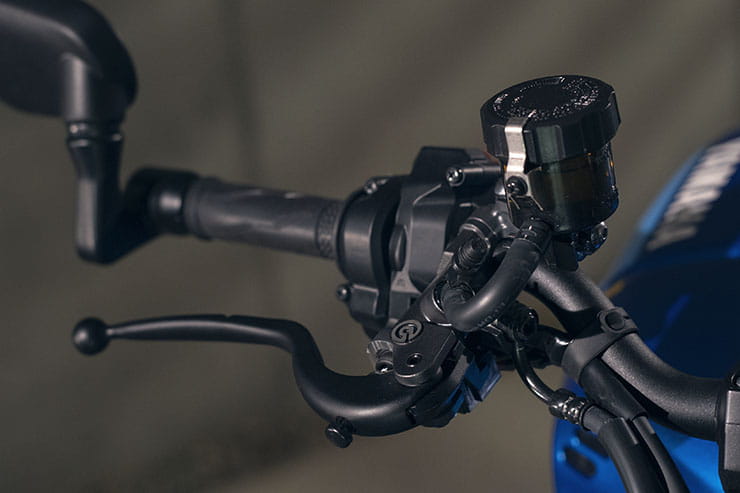 The ridings position is adjustable: the bars can be rotated in their clamps (9mm forward, 4mm upward); the pegs can be moved 14mm up and 4mm rearwards. The new stance, with its 810mm seat height (15mm lower than the MT-09 and 20mm lower than the older XSR) could be described as racy, but it’s certainly not café racer-committed and isn’t uncomfortable around town (like the XSR900 Abarth).

I enjoyed what felt like a natural riding position, especially being tilted slightly forward, which meant even motorway speeds weren’t unpleasant. Cruise control comes as standard, the quickshifter is smooth, the throttle is light, and bar-end mirrors actually worked, unlike many I’ve tried previously. The 3.5-inch dash is a little small, but all its information is clear and simple.

After a few hours, you will be thankful for the rest as the seat does lack a little padding, and there’s nothing to hold onto for the pillion. Yamaha doesn’t offer an alternative in the accessory brochure either. It’s not uncomfortable, but the lack of padding is noticeable, increasingly so as the day wears on. It’s also worth pointing out that at 5ft 6 1/2in I am vertically challenged and loved the low seat and the sensation of getting both feet firmly on the ground. That said, riders over 6ft may find it a little cramped.

The big change up front is the introduction of Bosch 9.1 cornering ABS and a Brembo radial master cylinder. There is no changeable engine brake control, but a slipper clutch is standard. You cannot switch off the lean-sensitive ABS, but you can opt to have just conventional ABS, not lean-sensitive.

Like the suspension, the radial four-piston stoppers are hard to fault. There’s an adjustable lever, great feel at slow speeds, and strong stopping power when called upon. In perfectly dry conditions, I never felt the ABS intervention, and I’m sure all riders will appreciate the added benefits of cornering ABS. On the track you may want to change the pads, which sometimes felt a little wooden in extreme use. 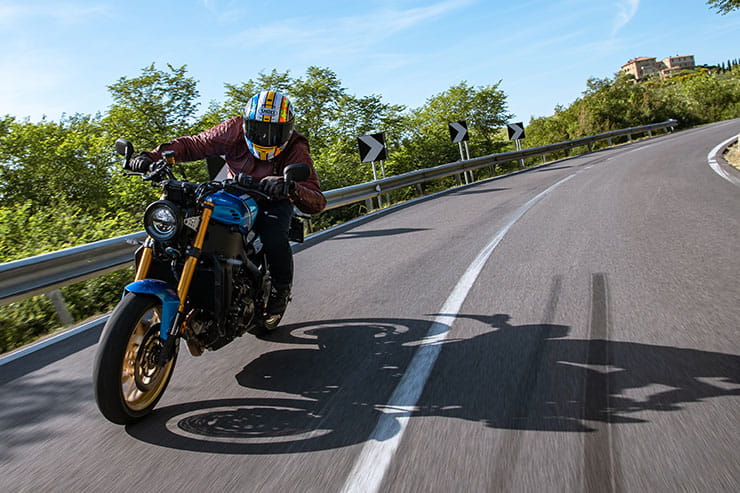 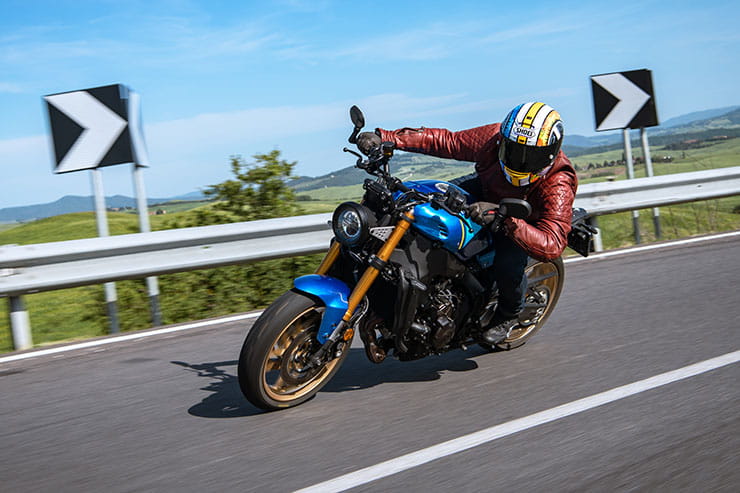 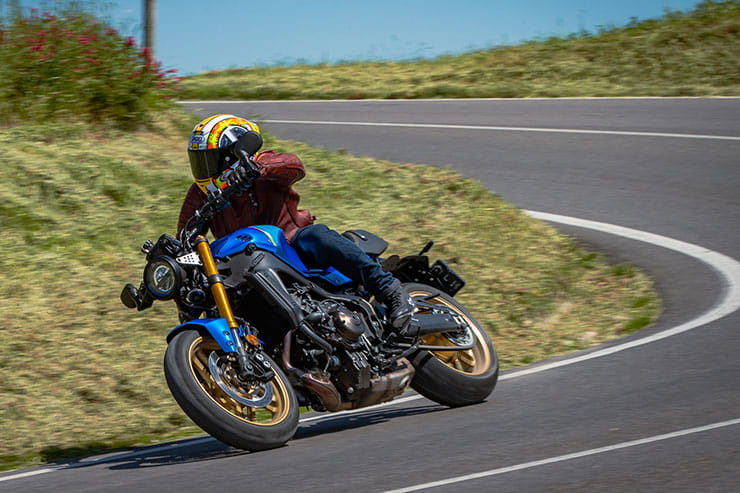 Yamaha has made significant improvements over the previous model with the introduction of a new 6-axis IMU, which is lighter and more compact than the R1 IMU, yet still makes 125 calculations per second. TCS (traction control), SCS (slide control), LIF, anti-wheelie, plus four power modes (PWR) and the up-and-down quickshifter all come as standard. There are two pre-set modes and a manual mode, which has predetermined settings, as recommended by Yamaha that change the power modes, and rider aids.

Anti-wheelie can be switched off while still having the TC and slide control active. All rider aids can be turned off aside from the ABS. However, you can opt for BC1 ABS, which is standard, not lean-sensitive ABS, that some may prefer on track. It’s an impressive array of rider aids on a bike priced just above £10k. 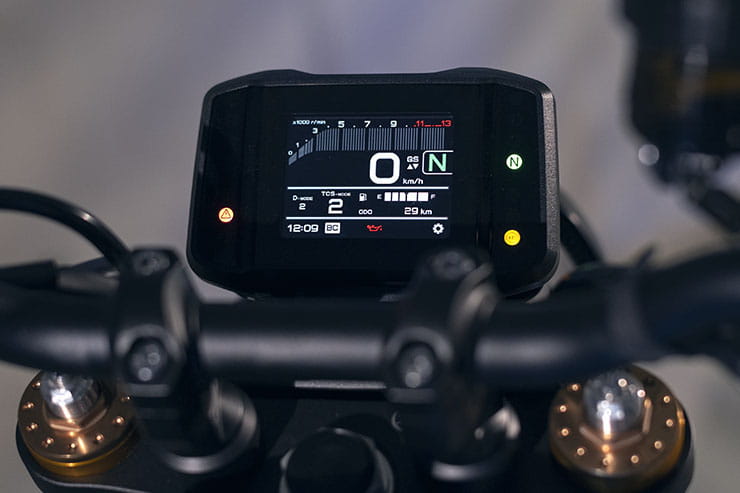 Here’s a high-level comparison list of some ferocious motorcycles in a competitive sector of the market: 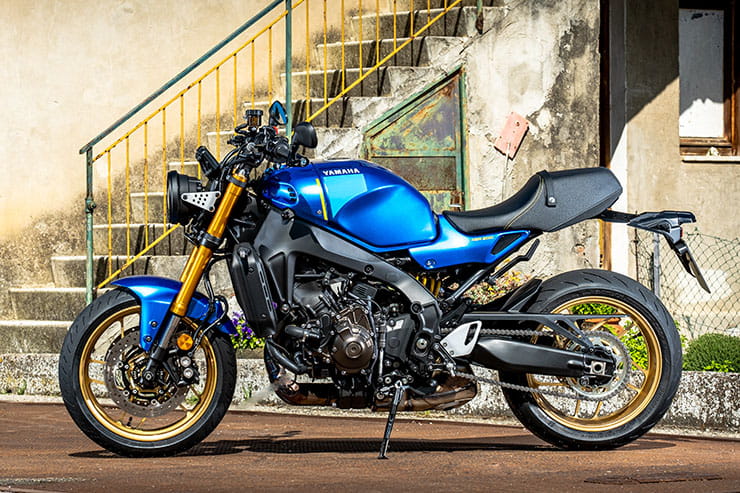 I expect the appeal of the XSR depends on your age, which is why I love it. It rekindles memories of my youth in the early 1990s. The shape of the tank and the feel of the bike do it for me.

But ignore the retro appeal, take away those well-judged looks, and you still have a fantastic road bike with a brilliant and sonorous sounding triple. There’s more than enough power and torque for the road, backed up by excellent rider aids and chassis. The rider aids haven’t diminished the fun, just added to the appeal and safety. Priced very competitively, I can see the 2022 XSR being a huge success.

Some taller, heavier riders may want more comfort, but as a road bike, it’s very hard to fault. We often judge a bike on its handling and performance and forget how important it is how a bike makes you feel. I never stopped smiling on the XSR. I’m unsure what more you’d want from a road bike. 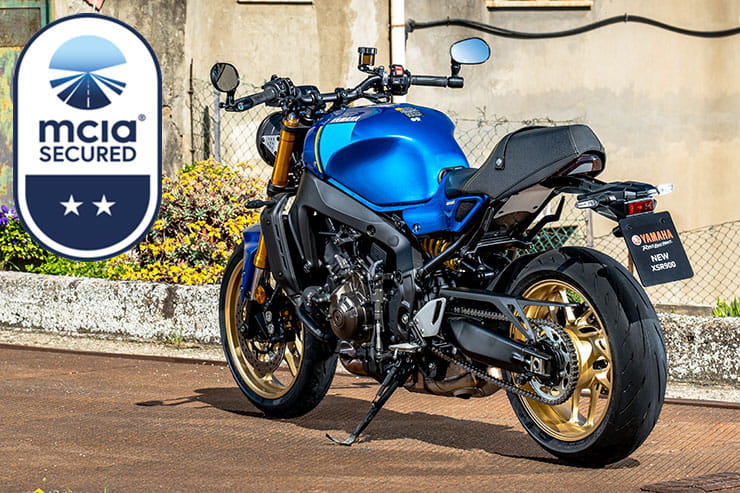