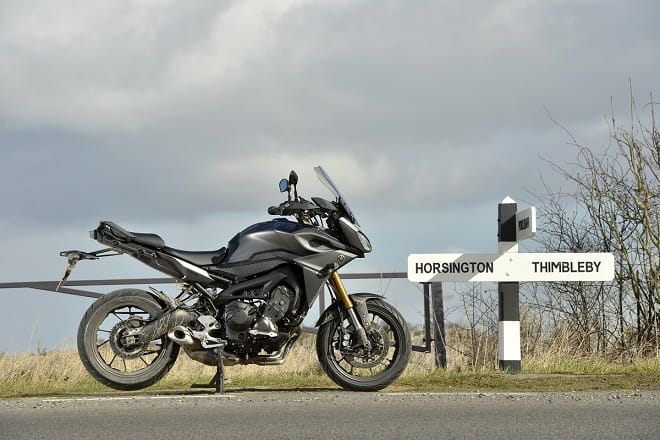 “What is it then?”, asks a mate of mine as I pull-up. He's a 50-something year-old bloke who’s thinking about buying something ‘a bit more upright’ than his Suzuki Hayabusa. Something to do a bit more touring on, maybe with the better half on the back.

He’s intrigued by the looks of the new Yamaha MT-09 Tracer. And he's a right to be, Yamaha dealers can't get enough of them at the moment.

“Well, it’s kind of like a lower adventure bike without knobbly tyres. A cross between a Yamaha TDM850, a Fazer and an MT-09”, I say.

I’m not sure that made it any clearer for him, but whatever it is, it’s a bloody fine motorcycle, even if our man isn't convinced.

It's a bike that is as happy at 80mph on a motorway as it is riding two-up, or hauling along a twisty back road. Yamaha call it ‘genuine multi-role potential’. I reckon it’s a motorcycle that could be fighting for honours as Bike of the Year. You listening, MCN? 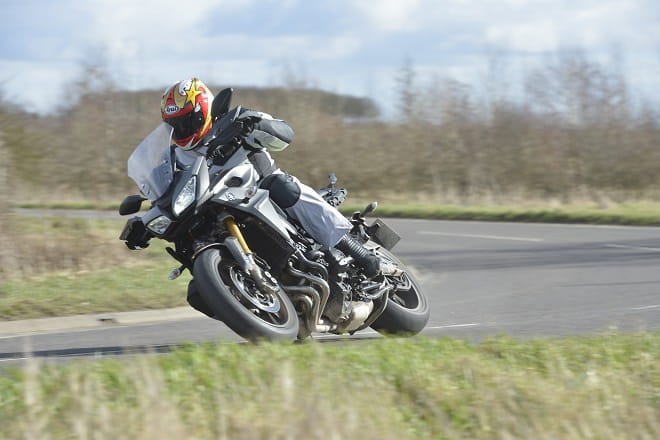 Its nearest rival in terms of spec and performance has to be the £350 more expensive £8499 Triumph Tiger 800 XR. It gets a similar spec for similar money, though I reckon the MT is a little bit more aggressive in its nature, a bit more sporty. And, the Tracer is free of the curse of semi-off-road tyres. On this bike you get touring rubber in the shape of Dunlop’s D222, and there’s no bashplate in sight.

Though Yamaha never intended the MT-09 to be an adventure bike, it fulfils much of what they offer. And let’s face it, how many people actually take their adventure bikes down anything more than a gravel car park? Not many, I’d guess.

So, the Tracer. It’s powered by the 847cc three-cylinder cross plane crank motor from the MT-09 which was launched in 2013. It uses the same frame too, but then there’s new bodywork with an adjustable screen, adjustable bars, adjustable seat, traction control that can be switched on and off, and ABS. Oh, and hand guards which do a brilliant job of keeping off the icy 50mph wind I was riding in on our test.

In all honesty it looks a bit bitty to me. The quality of the fittings and the fairings is good though. It’s edgy, and the fairing is made up of dozens of parts so it’s not a bike that I instantly fell in love with in terms of looks. But it’s distinctive and well-screwed together.

There’s also nice finishes like a carbon effect on the side panels, a headlight beam adjust, and a neatly tucked away exhaust too. The headlights and their LEDs are distinctive too and it looks great from the front.

The finish is as good as anything out there and the simple to read LED clocks are easy to get on with. Even the mirrors work.

But more than the upright riding position, which instantly makes you feel like you’re sat on an adventurebike, (Tiger seat height 810-830mm, Tracer seat height 845-860mm), it wants to get on and hustle.

That motor is what makes this bike. It makes 115bhp and has loads of mid-range. You can feel it gets a tiny bit vibey around 6000 to 8000rpm but the hit it gives seems to punch way above the claimed 115bhp and 62.6ft-lb of torque Yamaha say it makes.

It’s punchy, exciting. It feels alive and it makes a great sound too, something that seems to get forgotten in some modern bikes. At higher revs it sounds like a baritone Triumph with a sore throat, and goes on to rev to 11,5000rpm. I rarely revved it above 10,000rpm, and most of the time it’s happy between 6000 and 9000rpm if you want to get a shift on.

You don’t really need to rev it hard, unless you want too, of course. But that noise is something you want to hear more and more, so you may find yourself in the mid-high revs more than you actually need.

The fly-by-wire throttle works just like any other with a cable in terms of feel and your connection to the rear tyre, and you never notice it. The slightly sharper riding mode called ‘A-mode’ is a little snatchy in town, but in standard mode it’s great. I never tried it in the third, calmer mode more suitable for wet riding.

You can dial in power hard and the traction control will stop any slides. It can be turned off too if you feel the need. The suspension is nothing fancy, yet it works perfectly.

On the brakes its stable, the turn in is fast enough and you can wrestle it over bumps in a 50mph side wind and it never shakes its head. It’s stable, planted and right for UK roads. You sit in the bike and it feels incredibly narrow. Yamaha say that it can lean over to 48 dgerees. Do that and you'll be wishing it had slightly stickier tyres than the long-legged high mileage Dunlops, but you can lean it well over until the 'hero blobs' on the end of the footrests scrape.

Like the handling, it just all works well. The gearbox is positive, thought my fellow tester said he had some missed shifts, I never experienced that. 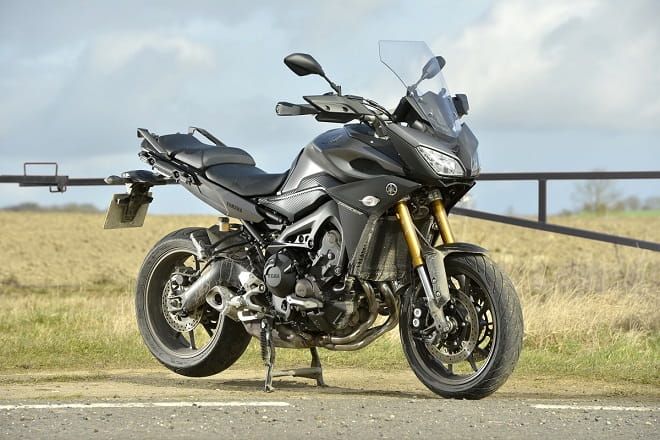 It’s really comfortable on a run and I had no problems getting 150 miles out of the tank. That was riding it reasonably hard so more gentle riding should easily squeeze 50mpg +out of it.

That fairing doesn’t look like much but it works a treat. I had it on its highest setting and suffered a bit of buffeting but then I am six foot four, and it was incredibly windy on the roads of Lincolnshire where I tested the bike. In normal conditions the screen was good, rather than brilliant.

And in the cold, the optional heated grips fitted to our test bike were absolutely brilliant. With a three-season glove on setting two out of three was more than enough, and setting three was so hot it started to cook your hands. Just what you need though if you intend to ride the Yamaha through a harsh winter. 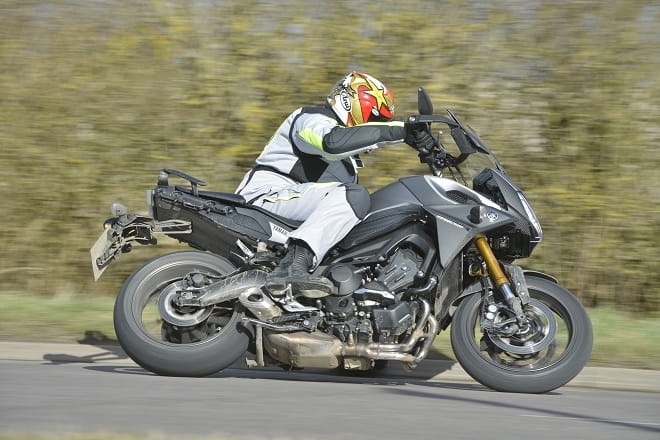 The brakes too just work as they should. It stops quickly and only if you are being really ham-fisted will you feel the ABS cutting in. And compared to its adventure bike rivals, it stops, goes and handles better than all of the bikes at a similar price range.

In all respects, everything the Tracer does, it does well. The motor is the most outstanding feature, and the rest of it is just damn good. But as a package the Tracer is one of the best bikes on the road today. It’s hard to fault. If I had to criticise then maybe it lacks a little bit of excitement, but then it’s an 115bhp all-rounder, not a 200bhp sports bike, and all in all honesty you never go wanting for more.

Bike of the year? It would be hard to argue against, and the way they’re shifting out of Yamaha showrooms it seems buyers think so too. 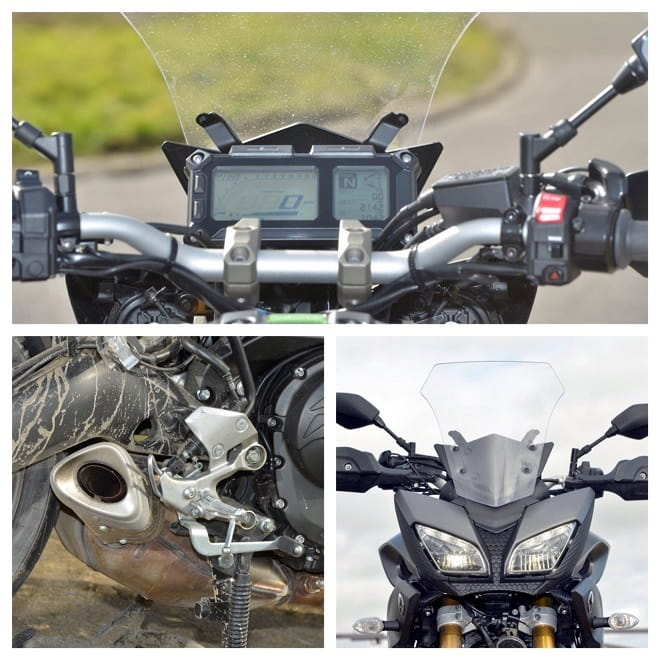 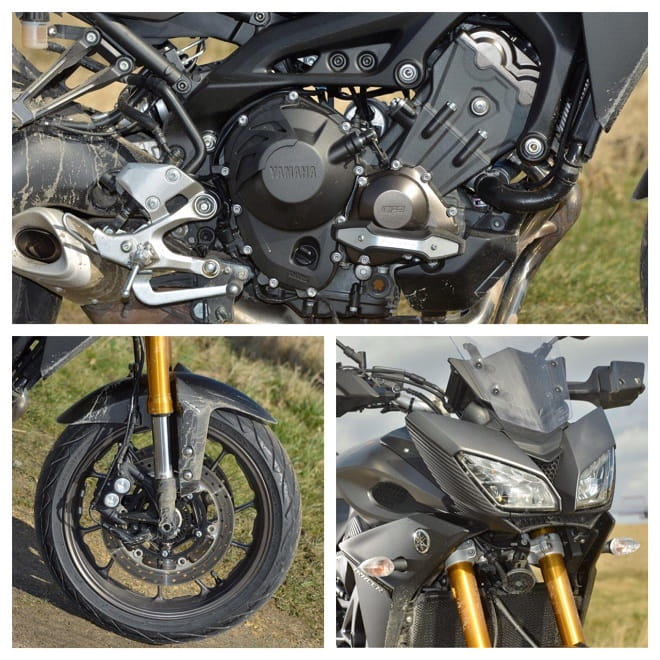 Have you ridden one yet? What do you think?