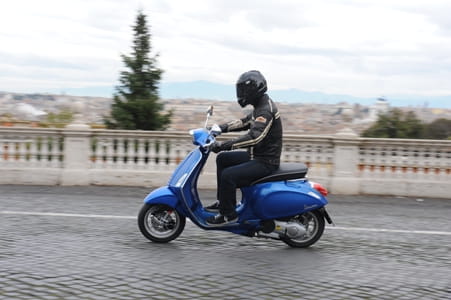 Exiting the plane in Rome we overhear the stewardesses discussing how exciting it would be to ride a Vespa in the capital city. Little did they know that we were heading out to the international press launch for the Italian scooter giants latest model, the Vespa Sprint 125.

The Sprint is the second new Vespa to arrive bearing a name badge from the past, the first was the Primavera in December. Like its stable mate the Sprint has also taken inspiration from a 1960’s model, although the only real similarity is in the name and its small frame, or ‘Smallframe’ as it’s known in Vespa circles. This new model replaces the Vespa S and shares the same air-cooled four stroke engine as the outgoing LX and the new Primavera. Not that that’s a bad thing because it’s a punchy little number. An ideal power plant for city riding but with enough poke to use for longer journeys with ease. That engine isn’t thirsty either, Piaggio claim around 130mpg…a figure not to be sniffed at. It also has a range of 300km’s from the 8-litre tank and service intervals are 10,000km’s. 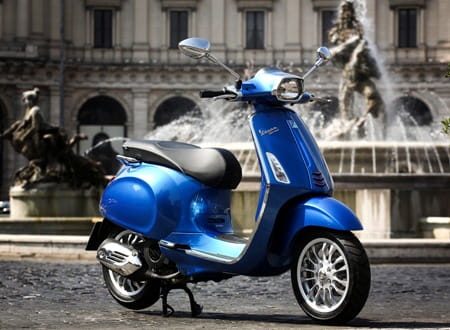 Aesthetically the Sprint is stunning, everything just looks right, the paintwork is the icing on the cake though. It will arrive in the UK in three lustrous colours, Giallo Positano yellow, Rosso Dragon red and Blu Gaiola blue, if you don’t stand out on the yellow one you will never get noticed. As with all Vespas there’s a dazzling array of official accessories to go with your new scooter, you can choose different wheels, a sporty single seat, various bags, screens, racks and pretty much anything else you can think of. 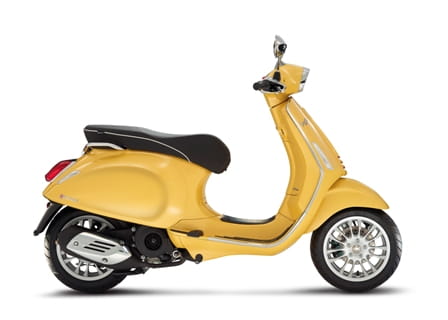 Aside from great looks and a nippy engine the Sprint is also ultra practical, the underseat area has been redesigned to accommodate a full-faced helmet. It swallowed my Arai easily. There’s also a pop out bag hook, very useful (as any scooter owner will tell you) and there’s additional storage in the lockable glove compartment. The scooter may appear to be small but its actually ergonomically very well designed, the frame has been lengthened (from the older S model and LX) so even the tallest of riders won’t feel cramped. The seat is also low at just 790mm and the floorboards have been cleverly sculptured to be narrow so that it’s much easier for shorter riders to touch the floor. 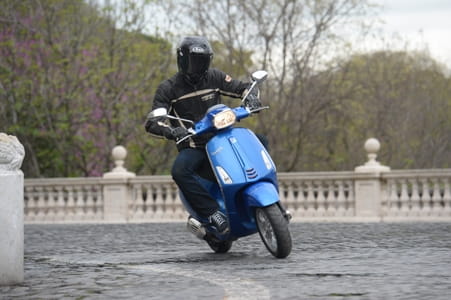 Bustling cities are where a Vespa is at its absolute best, they’re so nimble and well balanced that there’s nothing better for filtering, or getting around quickly with no fuss…all whilst looking super stylish of course. The lively engine produces 10.5bhp but it picks up very well (as the name hints) to help you get away quickly. The Sprint also handles very well, thanks to some extra rigidity built into the all-metal design. The steel bodywork is pressed and welded to a sub frame, in the traditional Vespa way. An attribute that makes the brand stand out from cheap imitations. Blasting around Rome, a manic city but one where scooters and cars blend seamlessly with mutual respect for each other, much like the ancient and modern buildings across the city, the Vespa Sprint proves it has the credentials to make it the perfect machine for commuting, or pleasure. It’s just so adept at making easy work of snarled up city streets that everybody should be using one, if they did the world would be a happier place. The scooter isn’t just a pretty looking machine though, it also gets around corners very well so you can have some fun aboard, and that’s what riding should be about. We ride to enjoy ourselves, to live a little and with a good scooter you’ll find yourself enjoying every ride, even if it is only to work on a dreary Monday morning. The Sprint also has fantastic brakes, with a 200mm disc up front and an old school rear drum at the rear. The drum may seem like a cost saving measure but it is one of the best 125 brakes I’ve used. The model will come with ABS as standard when it arrives in the UK in May, although our tests bikes didn’t have the system fitted. 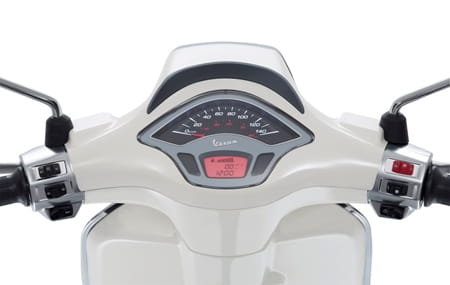 As we blasted our way around the city it made me appreciate just how good and useful a scooter is. Cars were stuck in traffic, horns blasting almost by reflex action rather than genuine frustration, bike riders looked uncomfortable and a little stressed but every scooter rider seemed to just be enjoying the experience, young or old, male or female. A Vespa crosses generations; it bridges gaps and gets people talking. It’s an iconic name; it’s about the lifestyle, the feeling it creates within. People who own and ride the Italian machines have an affinity with other owners, it’s a brand that breeds passion and conveys feeling. It’s more than ‘just another’ scooter. Piaggio are asking in their 2014 advertising campaign, ‘Do you Vespa?’ I certainly do, but will you?