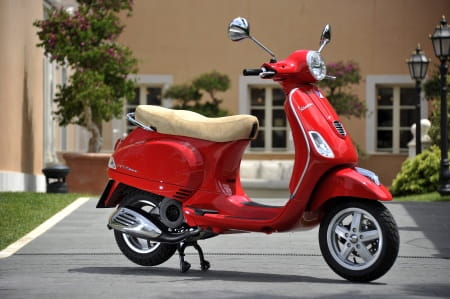 The little, or ‘smallframe’ Vespa LX has proven to be a popular scooter, its light and compact, has a low seat height (which makes it an ideal first scooter) and looks good too. The model received a revamp in 2012 and although the styling remained virtually unchanged (other than a new speedo, revised front horn grill, Vespa scroll logo on the centre floor mat and a couple of minor detail changes) the engine was new and improved.

The four stroke, 125cc air cooled engine makes 11.6bhp and has a three valve cylinder head. Obviously the engine is fuel injected, it uses a third generation MIU G3 system and integrated spark-advance, air/fuel ratio and phase management with lambda and three-way catalyst. The automatic CVT transmission has also had some work to optimise efficiency and reliability, which is good news for owners because the engine boasts a belt life of over 12,427 miles and service intervals on the scooter have been extended to 10,000km. Fuel economy is claimed to be a very respectable 129mpg (or 55km a litre at 50kmh) an improvement of 27% over the old engine. Those figures mean in theory if you cover 4,000km a year you could save over 34 litres of fuel (compared to the old model) and ride 1500km for free! CO2 has also been reduced by more than 30% so all in all it’s a potent and frugal little engine. 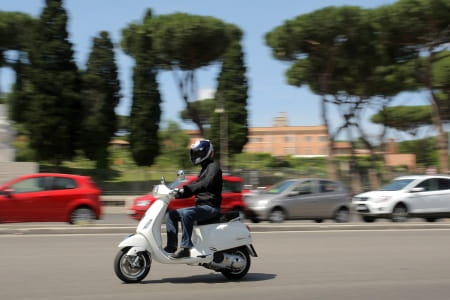 You can usually tell almost instantly if you’re going to like a scooter or not and after starting the LX and blipping the throttle I could sense that the new 3V engine was going to be quite nippy. It was almost as eager to get going as I was whilst sweating in the scorching Italian sunshine. Our group of scooters quickly got immersed into Rome’s busy morning traffic and I was quite glad that the Vespa was nippy because it helped me to get out of the way of suicidal Roman drivers. Thankfully the roads in the UK are much more scooter friendly and even riding in London is a doddle in comparison. The LX is very well suited to city riding, it’s agile so you can point it in the right direction and nip through traffic, it’s also light and nimble so you can turn it around in the smallest of roads. As expected, the new engine delivers what it promises, so has loads of low down and mid range power, which is very useful whilst trying to dive through a small gap between four lanes of crazy Italian drivers. That extra bit of power helps to keep you safe and it’s always good to have a bit left over in reserve. I didn’t get a chance to test the top speed of the scooter, although I did manage to see close to 65mph on the clock during one traffic free blast. Apart from crazy drivers Rome also has an abundance of cobbled streets and tramlines, which are all good places to test a scooters suspension. I’m pleased to report that the LX handled the dodgy terrain without hassle and the Michelin City Grip tyres more than lived up to their name.

The Vespa LX 3V is available now; it comes in a choice of five colours and is available as a 50cc two stroke for £2471 or the 125cc four stroke for £3221. If you’re looking for a machine to blast around the city, or to travel further afield the LX is more than capable.