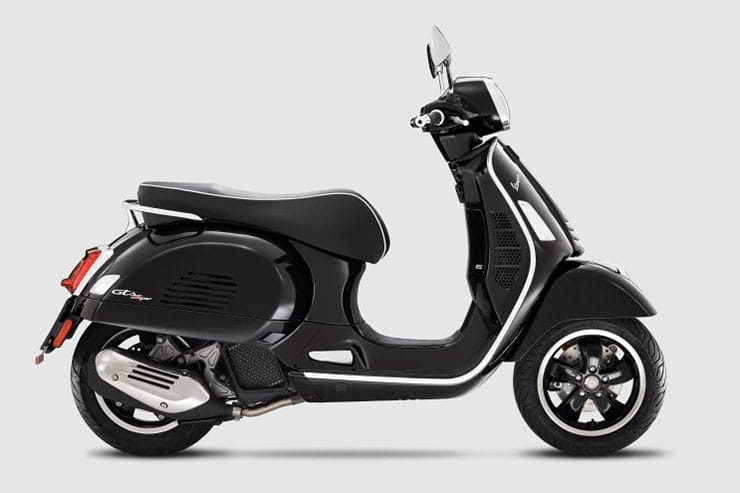 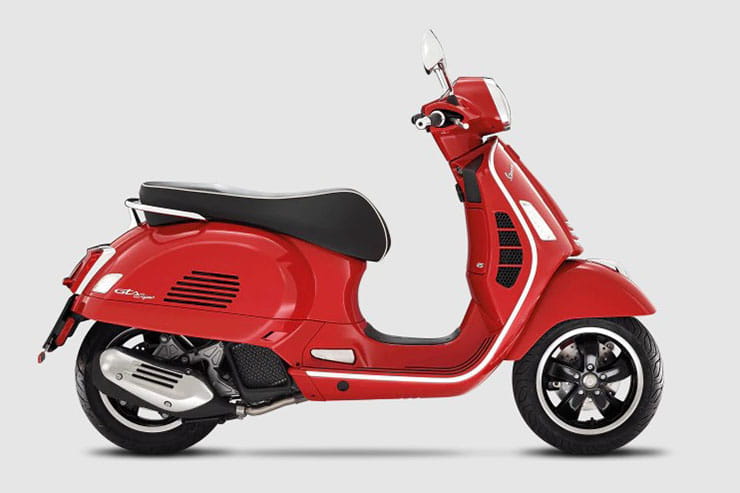 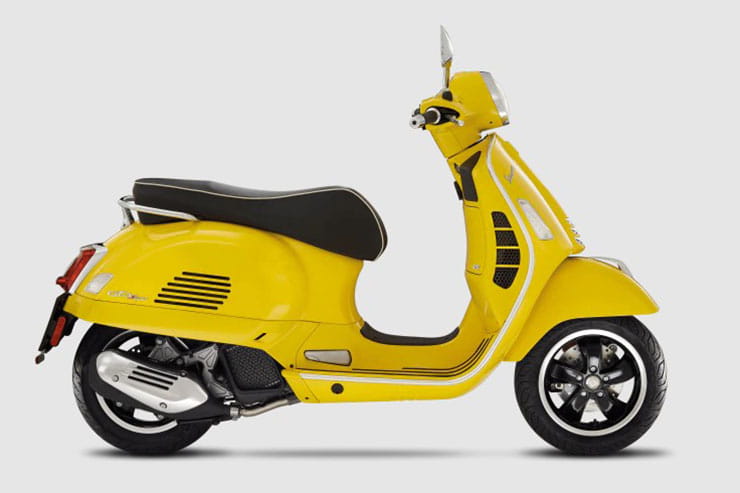 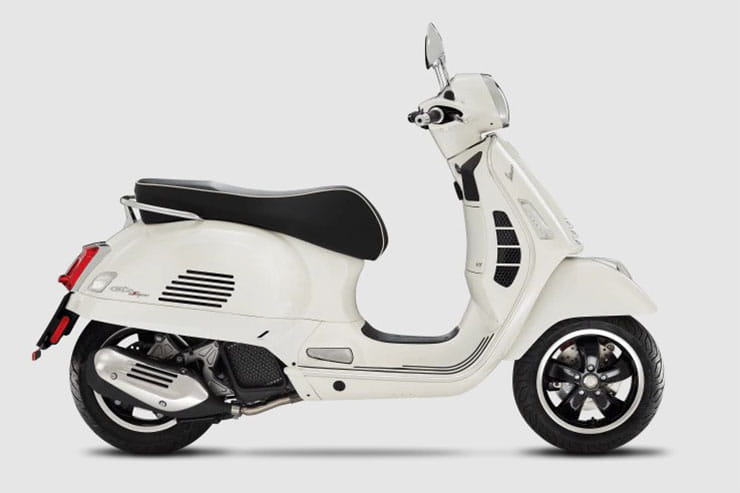 You've got to hand it to Piaggio. The Italian giant has absolutely nailed how to make the best of its Vespa heritage, and in 2021 celebrates 75 years of the iconic scooter. Maybe with something as legendary as the best-known scooter in the world you can't go wrong, and they haven't.

The first retro look ET4 Vespa was launched back in 1996, and ever since Piaggio has stuck with the concept of using a modern motor clothed in retro bodywork. The plan has worked, as not only is Vespa still with us but Piaggio is able to charge premium price, justified by the fact that the scooter is still made in Italy, and of steel, not plastic. There's certainly plenty of choice – include all the colour variations and I make it 21 Vespas currently offered in the UK, including 50s, 125s and 300s plus the battery-powered Elettrica.

The GTS Super 125 tested here is about halfway up this pecking order, combining the bigger GTS body with the smaller 125cc engine. You couldn't mistake it for anything but a Vespa, and despite the many Vespa lookalikes from China, it's still the real thing. But does that make it worth buying? 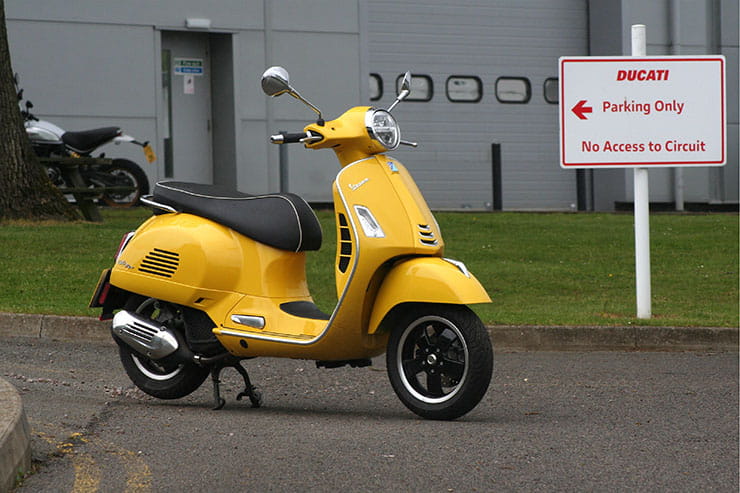 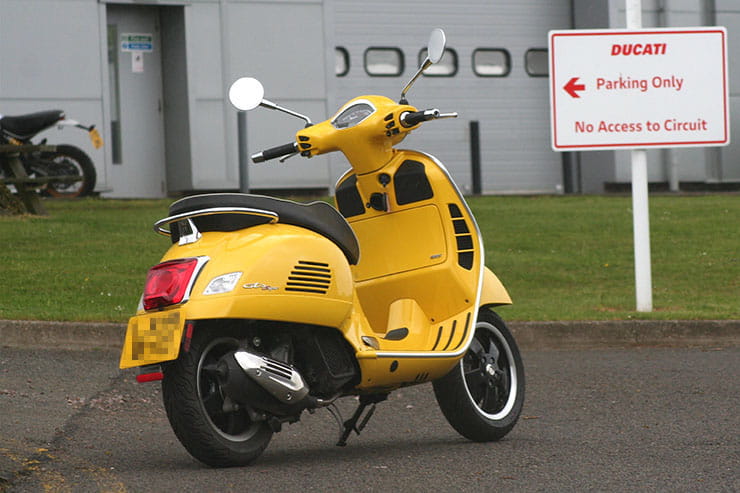 A brand-new GTS Super 125 costs £4700, and you can of course buy a perfectly serviceable 125cc scooter for half the price. If you're purchasing sensible transport with no aspirations to anything else, it's clearly over-priced. On the other hand, there are plenty of people for whom the whole Vespa appeal makes it worth the money. When I rode the GTS in May 2021 Piaggio was offering a 0% finance deal over two years, though with a hefty deposit of nearly £1300.

This is a 125cc scooter, so you don't expect neck snapping performance, but certainly enough oomph to be comfortable on busy A roads. And with the GTS that's exactly what you get. It nips away from the lights fairly smartly (though not as quickly as some 125s) and winds up to an indicated 60-65mph on the unmistakably Vespa speedo, touching 70 with the help of a following gale. It's happiest holding 50-55mph, so OK on main roads but best keep off motorways. Having said that, it proved just about able to keep up with a group of motorcycle testers on Piaggio's annual test day. The little 125cc motor is smooth and unobtrusive, which is just how it should be on scooter, and the GTS is dead easy to filter to the front of a traffic light queue and get away pronto without getting tangled up with the cars. 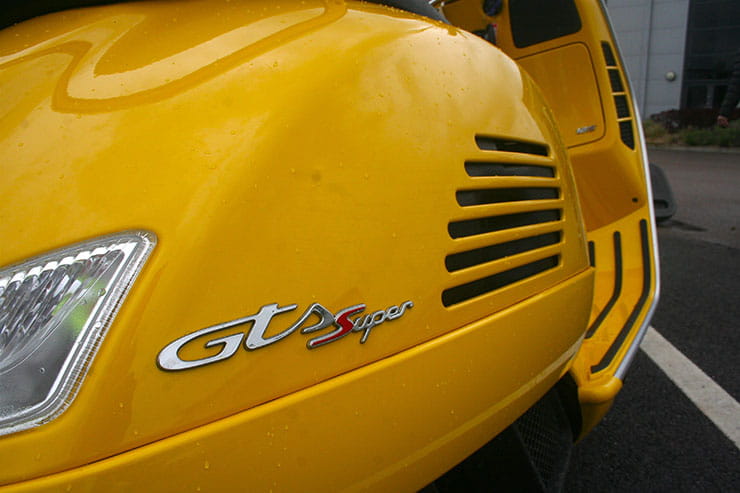 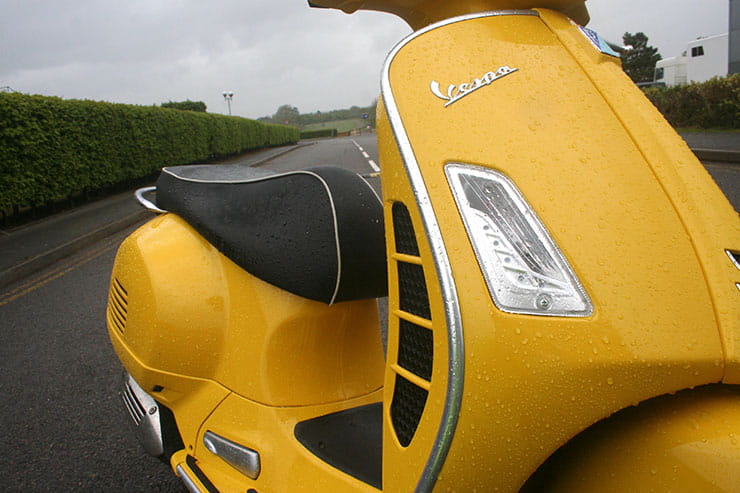 The GTS has the latest variation on Piaggio's standard liquid-cooled 125cc four-stroke single, the i-get. It's not an exotic bit of kit, with single overhead cam and two valves, but it does a produce a decent 13.8bhp at 8750rpm, not far off the limit for the A1 class. That's backed up by the equally important 11.1Nm of torque at 6750rpm, again, good enough for a 125.  One innovation is what Piaggio calls RISS (Regulator Inverter Stop & Start System), which is an auto stop/start which cuts the engine a few seconds after stopping at the lights to cut emissions and save fuel. Opening the twistgrip restarts it, with no need to touch the button. RISS also junks the traditional starter motor in favour of a brushless starter mounted directly on the crankshaft, which Piaggio says is quieter, more reliable and cuts weight. It certainly works unobtrusively, which is part of the point.

This being a modern scooter the engine is linked to a CVT auto transmission, the sort used by countless millions of scooters for the past 40 years. It's not the most efficient means of transmission, but it's highly convenient, fully automatic, and very easy to use.

We didn't have time to do a proper economy test of the Vespa. The official figure is 117mpg but in the real world, given its very similar spec and weight to other 125s, mid-90s mpg should be possible with smooth rather than gung-ho riding. If you want the ultimate in fuel economy, buy a geared 125cc motorcycle, which can give well over 110mpg given sympathetic riding.  The Vespa's tank holds 7 litres, which should give it a real-world range of 120 miles or more. 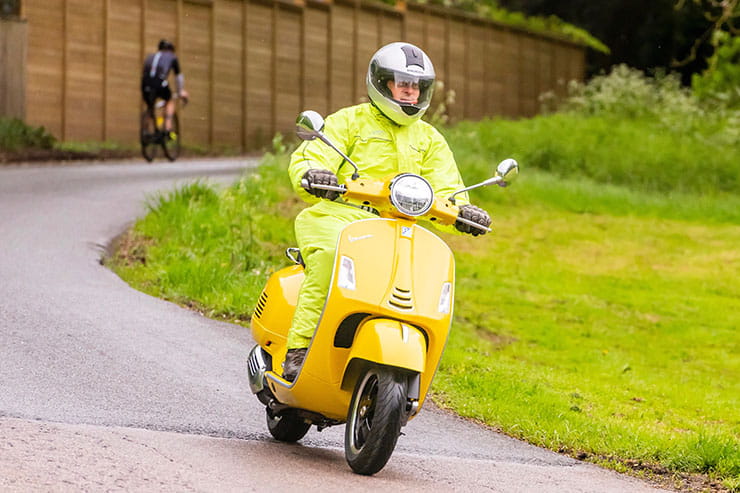 If you don't like small wheels, look away now, because the GTS has 12-inch hoops front and rear. They're not quite as tiddly as the 10-inch wheels fitted to the smallest scooters but coupled with the short wheelbase do give the Vespa a sensitivity to mid-corner bumps that you don't get with a motorcycle or big-wheeled scooter. Once you're used to it, it's fine, and the GTS weighs 145kg, so it's light and easy to flick around, especially in town, which is after all its normal habitat. Fittingly for a European-built scooter, the tyres are Michelins, and a good job they do too.

Suspension is the same basic set up used by Vespas since virtually day one. Two rear shocks adjustable for pre-load and the distinctive single front shock and lever arm at the front. They do the job, staying well damped and in control, at least riding solo.

ABS is part of the GTS Super spec and it's nice to have. The 220mm discs at each end are easily powerful enough for the bike's performance and using them hard had the rear ABS just starting to chip in on damp tarmac.

This is where the GTS scores over smaller 125cc scooters. The traditional Vespa riding position feels roomier than a modern style scooter, thanks in part to the almost flat floor, which allows you to move your feet about. You sit upright with a good view and there's no hint of the Vespa trying to influence the way you ride – just ride and enjoy. Passengers get an equally good billing, with generously sized seat, beautifully thick chrome grabrail and flip-out footrests. Vespa also offers a 'Touring' version, which sounds a bit like marketing hype, but with a decent screen, not too much luggage and a relaxed schedule, you really could do distance on one of these. 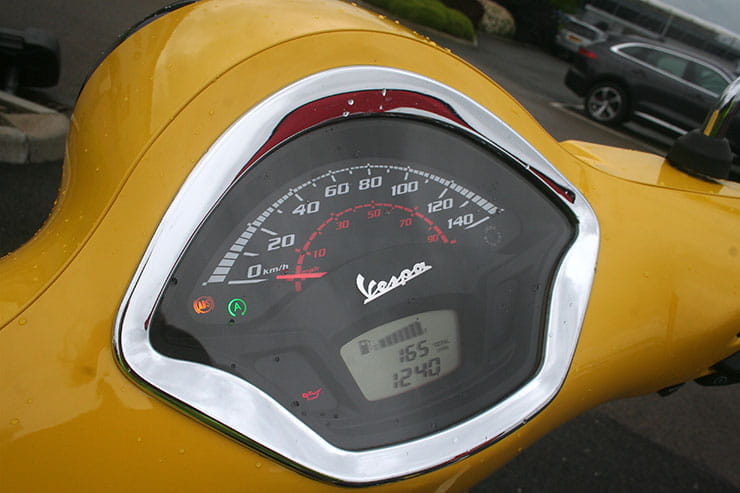 No rain, sport and track day modes, but the GTS does have some useful bits and pieces. There's enough room under the seat for an open-face lid (though not a full-face) and the small front compartment will take your phone and a few bits and pieces, plus the shopping bag hook is handy. Unlike the bigger Vespas there's just a simple (though Vespa-shaped) speedo and digital fuel gauge, but with tiny mph figures – it's a common problem. Still, there is a USB charge point, remote opening for the seat and Bluetooth connectivity to your phone, which includes a find your bike facility (probably more use in Vespa-infested Rome than Basingstoke).

You either like the Vespa thing...or you don't. If you're not bothered, save a lot of money, and buy a bread and butter 125 which will do just the same commuting job as the GTS, just as well. But if you do, buy one and enjoy it. Perhaps the nicest thing about modern Vespas is that despite evoking something from the past they're not like the retro style Minis and Fiat 500s, which compared to the originals are fat, heavy, and over-sophisticated. The 2021 Vespa retains the charm of just being a Vespa. 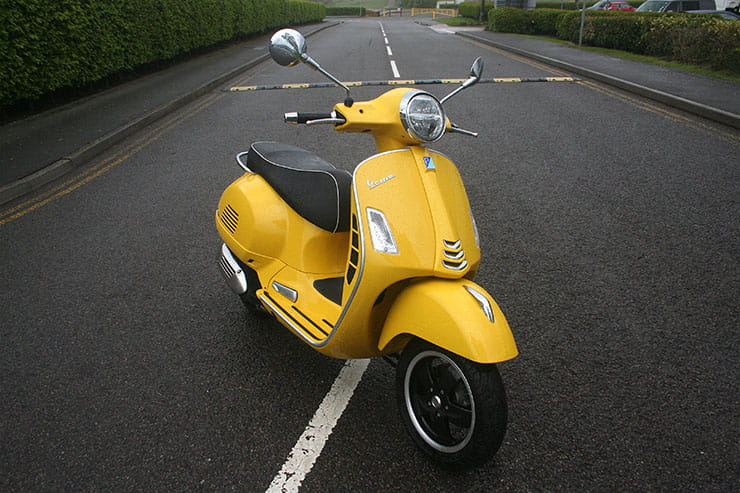