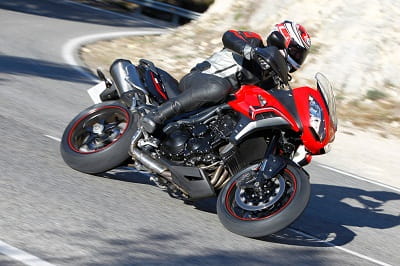 Don’t be confused by the Tiger Sport’s new name. This Triumph triple is an update of the Tiger 1050, so it’s a roadgoing “tall-rounder”, not a sports bike.

It gets a new name because it’s the only pure roadster in Triumph’s adventure bike range, alongside the dual-purpose Tiger 800s and Tiger Explorer.

In fact although the 1050cc, 12-valve engine gains 10bhp from intake and exhaust changes — bringing the max to 123bhp — most of the Tiger Sport’s new features are aimed at making it more practical, not sportier. New bodywork provides slightly more wind protection and holds brighter headlights. Revised geometry adds stability. The new rear subframe lowers the seat slightly, to 830mm. 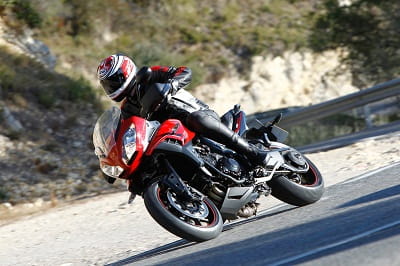 So far, so sensible, though it’s still a tall bike with a roomy, upright riding position. The subframe also allows more load in the accessory panniers, which now mount via a Dynamic Luggage System that connects them via a cable, allowing some movement and improving stability at speed. Even the extra engine performance comes mainly at low revs, with the increased maximum torque figure arriving earlier, at just 4300rpm.

As that figure suggests, the Triumph pulls almost from idle with heaps of three-cylinder grunt. The six speed gearbox is improved from the similar Speed Triple box, and now shifts very cleanly. But it’s rarely needed once the Sport is under way, whether it’s cruising lazily at an effortless 80mph — rider protected from the wind by the fairly efficient, non-adjustable screen — or punching out of bends.

Comfort is pretty good, with reasonably plush suspension and a stepped dual seat that is now flatter and lower for the pillion, who also gets new grab-handles. Triumph’s updates also include improving fuel consumption by a claimed nine per cent in general riding. Most riders should get more than 150 miles from the unchanged, 20-litre tank.

Handling is excellent, although with its relatively long wheelbase and long travel suspension the Sport can’t match the agility of a shorter, lighter bike such as the Speed Triple. Unchanged Nissin four-pot radial front calipers give powerful stopping, enhanced by an updated, quicker acting ABS system.
Perhaps Tiger GT or even Tiger Touring would have been a more accurate, if less marketable, name for this Triumph. But whatever it’s called, it’s a classy sports-tourer that is practical, fun to ride and competitively priced at £9499. 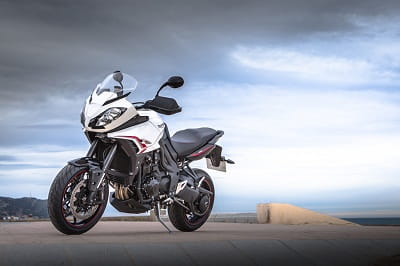 Thanks to Alessio Barbanti & Stefano Gadda for the photography