Never mind being known as the ’X’, it would make more sense being called the ‘B’. That’s B for a host of adjectives like big, British, beefy, brash, brutal, butch, bold, brutish, beastly, bulky and of course bad-ass. All of which could sensibly describe this 367kg, £14,999 monster.

The limited edition Triumph has been released to celebrate 10 years (think Roman numerals) of the original Rocket III, the world’s largest capacity mass production motorcycle, and is therefore equipped with the identical 2,294cc, three cylinder engine. This anniversary model gets a fly screen and an image overhaul with blackened twin exhausts, mirrors and handlebars. The black wheels have hand painted silver pinstripes and the striking grind effect stripe through the bodywork was designed and painted by specialists, 8-ball. Oh and there will only be 500 of the ‘X’, each with individually numbered side panels and billeted aluminium name badges. 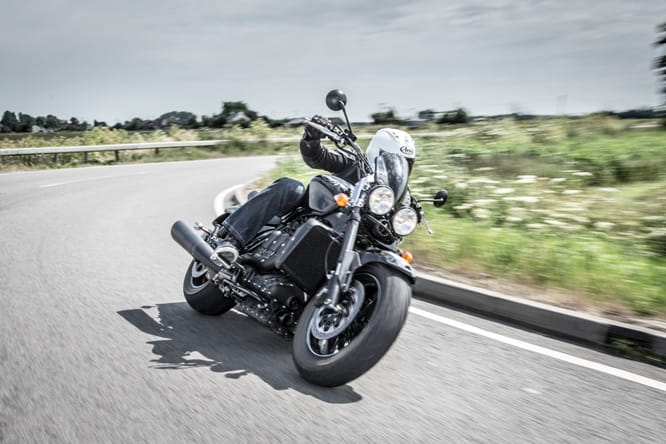 The original bike was designed to break into the lucrative American cruiser market and in the 10 years rgar have passed since, Triumph have sold 3,000 of the 148bhp behemoth.

There’s nothing too sophisticated or demure about it, nor the Rocket III. The duo could be likened to a stereotypical East End geezer; when stationary it looks mean, flexed and ready for a rumble. Let it talk and it’ll grunt, growl and bark back at you. There’s certainly a gentle side but wind it up and it’ll fly. Its considerable bulk will cause passers-by to stop in their tracks, glance over and quickly look away if it stares back.

In fact this brief comparison shows the size differential over a standard 600cc bike:

Despite being almost a foot wider than a CBR, the X still slips through traffic without too many issues, possibly because other road users scatter when they see it coming. Pull up to the lights alongside a sportier machine and they will assume it’s not going to put up much of an acceleration challenge but watch many-a-lighter machine eat Rocket dust when the Triumph hauls is mass off the line. The torque keeps on providing mph’s and its weight adds to the rear tyre’s grip rather than spinning into surrender. 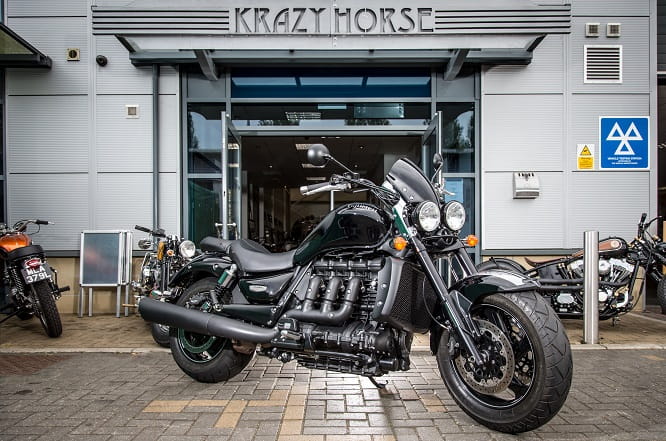 When stationary the three cylinder 2.3l engine twists when the throttle blips not as aggressively as a Boxer because of the counter-rotating crankshaft. It’s this type of quirky extra that adds to the Rocket’s character and while it comes across as a big old bear the riding position is not as outrageous as you’d imagine. The seat height is a manageable 780mm and the tank narrows meaning your legs aren’t splayed uncomfortably. The pegs have been moved back from earlier models but for me this adds to the discomfort which sets in after 50 miles targeting the base of the spine/coccyx area. The saddle is large and plush but soft and when combined with the rock-hard rear suspension every pebble in the road acts like a swift hammerblow. That said, the twin-shocks have a 5 position adjustable preload and I’d urge any test ride to include personalisation.

Slow speeds require 1st of the 5 gears thanks to the enormous torque on offer and low/slow revving 2.3 litre Goliath of an engine. Patience, coordination and dexterity are useful when manoeuvring around mini roundabout, car parks and narrow streets. Even cruising through towns below 30mph and all you’ll need is bottom gear. Pull in the heavy clutch lever, shift up and the massive “ker-clunk” of the agricultural gearbox reassures you the next gear has been selected, even so there is an indicator on the main digital/analogue display. The smooth engine, shaft drive and exhaust note keep on providing the entertainment while the 221Nm (163 ft lbs) @ 2,750rpm aids arm muscle development. Even at 70mph in top gear and the X’s rpm needle still sits below 3,000. Despite some above averagely aggressive riding the X still returned more than 36mpg while on test. Its massive 24 litre tank offers an indicated 195 miles until empty according to the digital display. 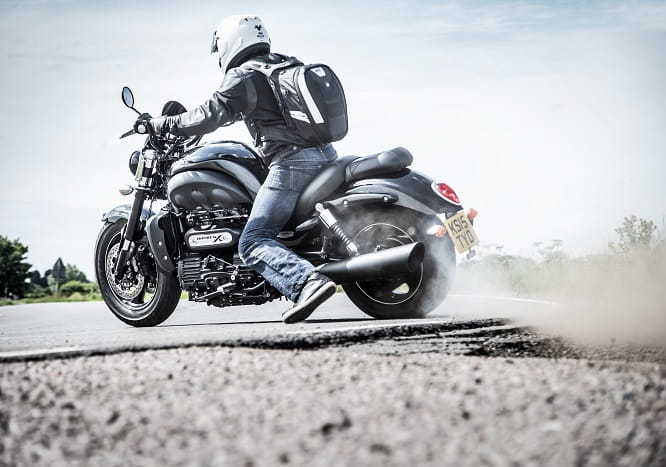 Cruisers are susceptible to grinding the hero blobs on the foot pegs given the bike’s ride height and their proximity to the floor but I found the 883 Harley Davidson allowed less of a lean angle than the Triumph before the sparks began. Lean it too far and the pegs will fold a little before scraping but at least you’re given enough of a warning that there’s no picking this beast up if it starts to go. The tubular steel twin spine chassis is well balanced so around the twisties you can hustle with the best naked sports bikes particularly when the Rocket will stomp on when you roll-on.

When upright and in a straight-line there’s very little to worry about. No cruise control, heated grips or engine modes to concern you which at least allows for plenty of concentration on when to brake. ABS is fitted as standard (introduced in 2010) and they have to work hard to slow the 367kg (wet weight) Rocket. Four-pot callipers grip the 320mm front discs and huge 316mm disc at the rear.

The Rocket X has no natural competitor but if you were looking at similar machines from rival manufacturers then Ducati Diavel, Yamaha VMax or either the Harley Davidson Fat Boy or V-Rod would come close.

Overall, the Rocket X provides one hell of an experience which is what I believe motorcycling to be about. There is nothing quite like it. Even if your local Triumph dealer lets you take it for a brief test ride it’ll make your day and give you plenty of conversational ammunition, there’s a whole lot of bike for £15k and if you opt for the ‘X’ then it’ll be one of only 500. You never know, in another 10 years’ time it could well prove to have been a sound investment. OK the novelty value might wear off after a while and you’ll need a fair amount of space in your garage but it’s an almighty thing equipped to provide a hugely entertaining ride though not necessarily one with lots of roundabouts.

Here’s the marketing video for the Triumph: 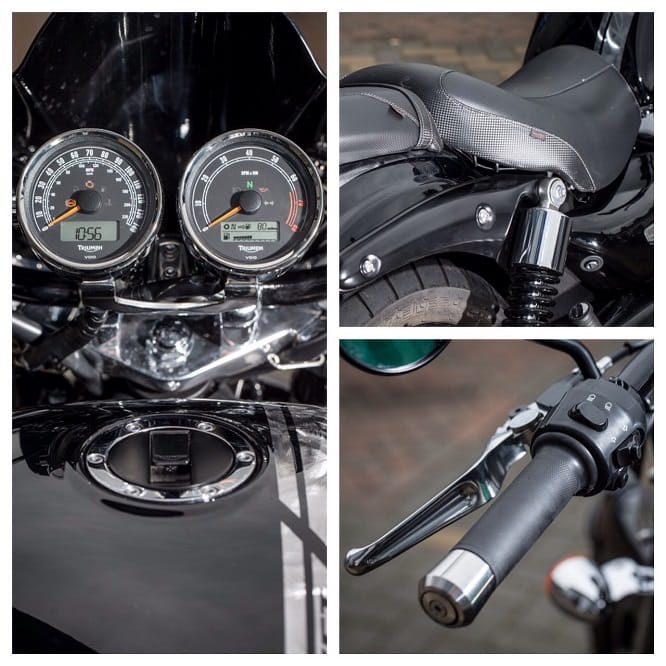 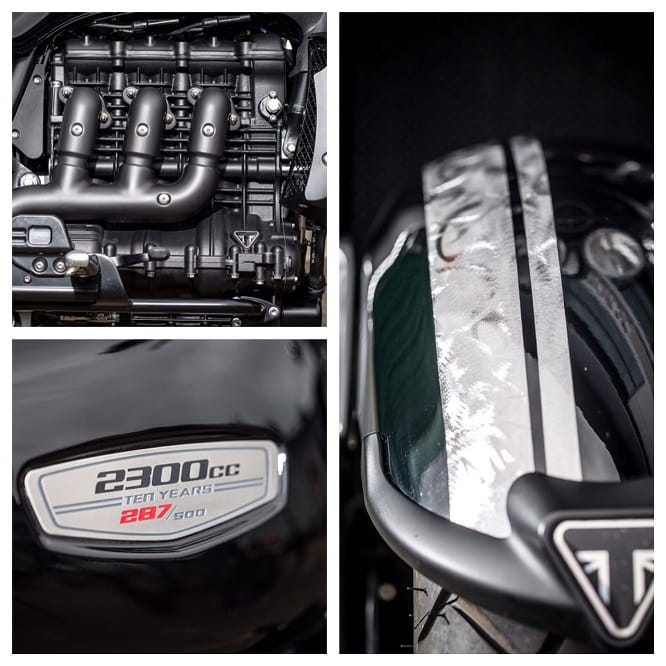 Thanks also to Krazy Horse in Bury St. Edmund’s for hosting our photo shoot

Have you ridden the Rocket 3 or X? Or do you own one? What are it's good and bad bits?  or