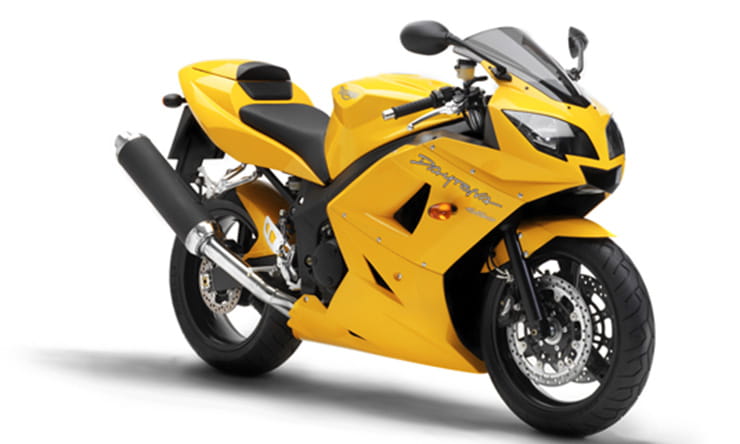 After the massive disappointment of the TT600, few were expecting much from the Daytona 600 when it first appeared in 2003. But despite going head to head with the likes of the brand new Honda CBR600RR and Kawasaki ZX-6R, the Daytona acquitted itself very well indeed. It may not have quite had the ultimate track performance, but on the road the Daytona’s physical size and beautifully balanced chassis made it a real star. It just needed a few more ponies in its motor…

In 2005 Triumph effectively copied Kawasaki’s lead and increased the Daytona’s capacity to 646cc, although they stroked their engine where Kawasaki bored theirs. The result was a fabulous road going supersport bike.

The Daytona 650 is a brilliant used buy for someone looking for a sporty supersport bike that isn’t full-on crazy. It’s the perfect machine for rapid road riding or the occasional trackday but it isn’t so track focused it loses out on road manners. The seat is well padded, the clip-on bars not too extreme and the fairing is actually quite effective and good looking. Compared to the dowdy CBR600F, the Daytona 650 has quite modern angular styled. The engine is tuned for midrange rather than top end, something that is boosted further by its larger capacity. And, best of all, prices remain quite low.

If you want a real bargain then the Daytona 600 is it, but if you want a better bike then save up the extra money and buy the 650 version, it is worth the extra investment. 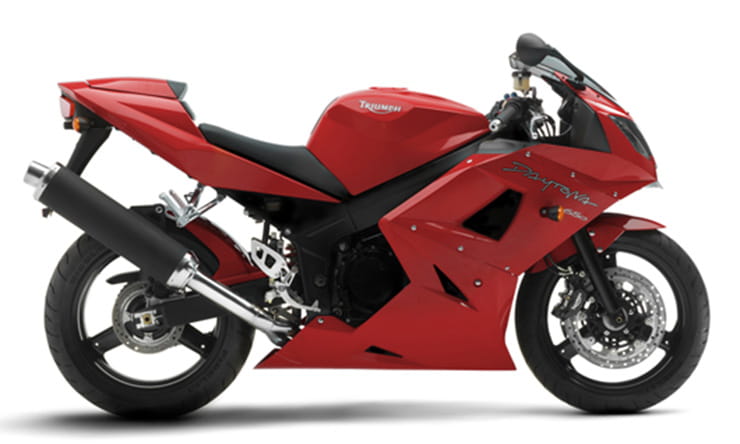 The Daytona is a reliable bike but during the mid-2000s Triumph’s build quality left a bit to be desired and this can plague used models. The major issues arise from the suspension linkages, which were treated to the barest of minimum of grease by the factory and as a result seize up. They should be stripped every 12,000 miles, but this seldom happens. Also check over the brake discs for rust, the fasteners for signs of corrosion or rounding due to them seizing in place, and the fairing for cracked lugs. The Daytona comes with steel braided brake likes as standard, but the calipers are very poor quality and need to be stripped and rebuilt every few years to get the best from them. The same is true of the suspension, which by now will need a refresh. If the bike has a race can fitted it should also run the Triumph official race ECU map, if it doesn’t it won’t get any performance benefits from the can. The gear change is better on the 650 than the 600, but it’s still not brilliant and the fitment of some rearsets vastly improves its action. A few owners report cam chain and stator issues, but these are fairly rare and tricky to predict or spot on a used bike.

The original Daytona 600 ran from 2003 until 2005, when the 650 replaced it. The 650 is essentially the same bike but with a 3.1mm increase in stroke that sees its capacity rise to 646cc while alterations to the gear linkage helps improve its action and new clutch plates and ECU map irons out a few other faults. The 650 also comes with a matt black exhaust as standard while the 600 has a metallic finish. The Daytona 650 remained unchanged until it was replaced by the all-new Daytona 675 in 2006.

http://www.jacklilley.com/ - Jack Lilley has sold Triumphs since 1959 and know the brand inside and out. Although they don’t often have Daytona 650s for sale, they love these machines and are always willing to help.

Clive Wood – Clive is an independent Triumph mechanic who is brilliant at getting used Triumphs to feel like new. Find him via Facebook.