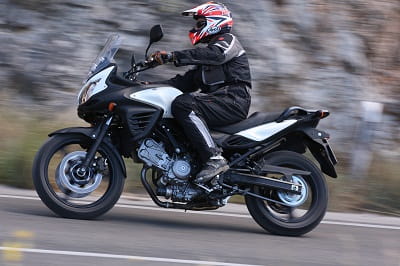 The V-Strom 650 is Suzuki’s best-selling bike in the UK, and there’s no surprise after riding one.

650cc of V-twin power may not seem like a lot compared to some of the bigger-capacity adventure bikes, and with just 65bhp it’s hardly going to have your adrenalin glands drooling, but that’s not what this bike is all about.

It’s about doing everything, anytime, any place. With a gentle motor that never wants for much and offers the kind of feel, grip and traction that means you hardly have to worry about what the rear tyre is trying to do when the roads are slippery and greasy. Start to rev the 650 V-twin motor and it gets a little vibey, but keep it friendly down the revs a bit lower and it’s smooth, punchy and enjoyable.

The Bridgestone Trail Wing tyres are fantastic in the wet, and give enough grip in the dry, though get them hot and the blocks start moving around.

As we’ve been riding the Adventure version. That means you get a taller screen extension, engine crash bars and handguards. There’s also a top box fitted as a Suzuki option, perfect for chucking in a suit jacket and a laptop bag if you need to ride to an office (like me).

With a 22-litre tank and 50mpg you’re getting a more than decent 242 miles to empty, which should be more than enough for the weekly commute or a big trip. In fact, compared to many bigger so-called ‘ adventure’ bikes it does double the mileage on a tank if you take it easy.

You’ll want a big tank range because even as a lanky six foot four rider the V-Strom is way more comfortable than most bikes of its size on the road. It’s long enough in the leg and bars, and comfortable enough in the seat to sit for 100+miles. To be honest, there aren’t many bikes that I don’t need to get off after 100 miles, but mostly because I have the attention span of a goldfish.

On the motorway the bike chugs along happily, feeling especially comfortable at 85mph (on a private ‘motorway’ test track officer), and will eventually hit 115mph or so if you try hard, but it’s not something you want to be doing too often as the suspension gets vague and it gets a bit of a slight weave on with the top box full. Carrying a passenger? No problem, just wind up the rear pre-load with a BMW-style adjuster knob and crank it up.

Ride it how it’s meant to be ridden at a sedate, traffic friendly pace and it’s a bike that will reward a more experienced rider and flatter a novice. The ABS system front and rear is full-proof, there’s enough steering lock for even beginners to do feet-up U-turns and in town it’s a delight.
Tall enough to see over cars, yet not as wide as many bigger adventure bikes and plenty of ABS-assisted stopping power if anyone pulls out on you.

If we were being brutally honest, and we are, it hasn’t quite got the same man appeal of many of the bigger adventure bikes, or even Triumph’s Tiger 800. Despite the engine bars and the adventure style look it lacks a bit of attitude, but as a package, it’s one of the best value all-rounders currently on sale and brand new, this version is just £7838, or the more basic bike is £6899 without the accessories. Even better than that you can pick up the old version from £2500, and that’s one hell of a lot of bike for the cash.

Get Suzuki Bike Insurance with Bennetts