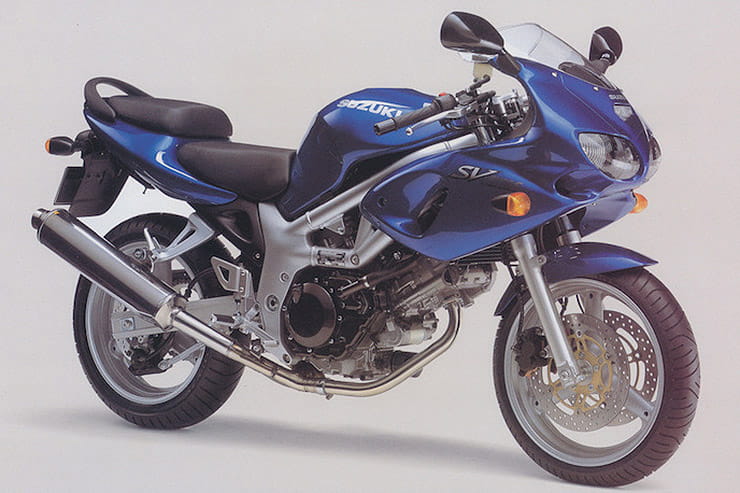 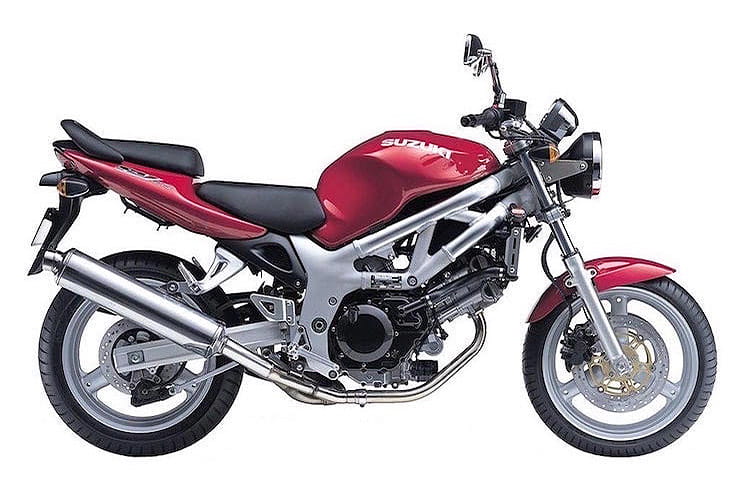 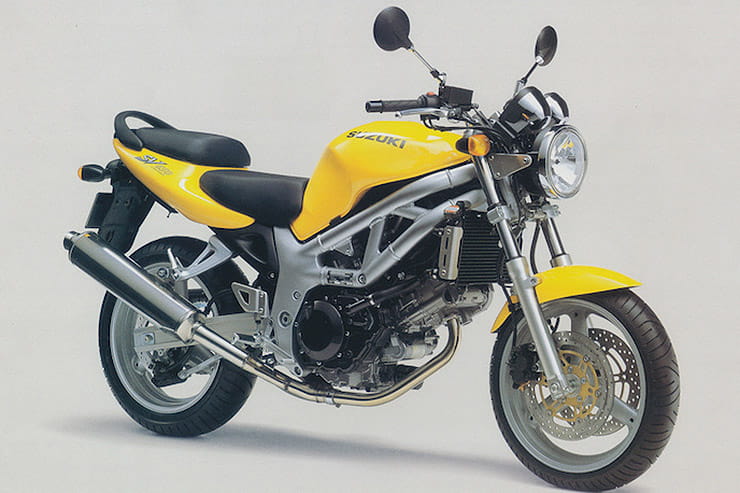 The late 1990s wasn’t just a time for big-bore bikes to go V-twin-tastic, with Honda, Suzuki and Aprilia all bringing out all-new litre-class sports V-twins to rival Ducati, they also knocked onto the middleweight class, with Suzuki’s brilliant and hugely popular SV650 the most obvious result.

Developed on the back of Suzuki’s TL1000S project, and with an envious eye on middleweight sports twins such as the Ducati Monster, the SV was launched in 1999 as an affordable-but-fun middleweight, available either naked or half-faired. Both bikes immediately found favour both as a ‘first big bike’ for novices and as an affordable all-rounder to more experienced types with the result being a combined 2,549 sold in the first year and 2,939 the following year.

Significantly updated, revamped and restyled in 2004 it went on to live in Suzuki’s range for a further 10 years before receiving a major update again. So although the second generation machine remains the most commonplace and the original version is now particularly aging, likely to have been abused and also suffer from corrosion due to cheap finishes and owner neglect, decent early examples can still be found due to its popularity and it can still make an affordable, honest and entertaining middleweight choice.

Designed as a ‘fun but affordable middleweight’, the SV650 was a bargain from the outset – something which contributed significantly to its huge popularity. The original naked version cost just £3,999 when it was launched back in 1999, with the S model a mere £300 more. Even so, the faired S proved the more popular due to its improved versatility which is why most surviving used examples are the S. Now 20 years old it’s to be expected that neglected, rough examples can be fairly cheap, some as low as £500-750 today – although for that money some work will be required. A far better idea, if your budget allows, is to go for a well-looked-after, low mileage version which can cost around £2000 but should prove just as useful and enjoyable as it was back when it first came out. You should still check for corrosion and damage, however, as poor finishes and novice neglect can still have had their effect. 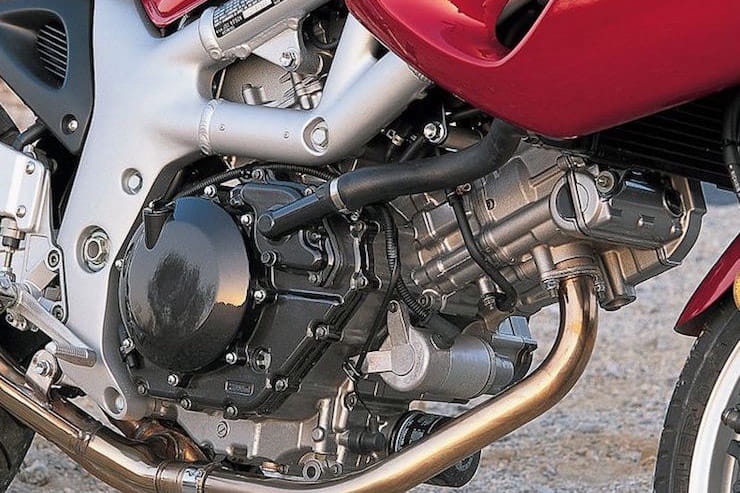 The performance of the Suzuki 650 is one of its best features and, with around 70bhp, remains competitive today with far newer designs such as Yamaha’s MT-07. Being a V-twin, the SV650 is no slouch from the off and always has plenty of grunt when it comes to overtaking. the engine also has something extra that most mass-produced Japanese engines don’t have – and that is character. The healthy throb of the two pistons lets you know the SV is alive. Of course it vibrates through the frame at higher revs but then that’s what V-twins do and this is what makes such engines endearing to their owners.

Overall, the 645cc has proven pretty bulletproof (we’ve heard of bikes over 100,000 miles) so find a well-looked after one and you are laughing. The original versions occasionally suffer from loud camchains, which if they get worse can result be sticking tensioners or knackered chains. Listen out for a loud rattle when you close the throttle. Clutch covers can leak as can breathers under the tank. Some 2000-model SV650s (both naked and faired) were ralso ecalled for the fitment of an oil guide plate to prevent premature crankshaft wear. First generation machines also occasionally suffered from faulty regulator/rectifiers, with dim headlights the biggest giveaway.
The gearbox is robust, too, although it’s worth knowing that the naked SV650N has a 15 tooth front sprocket and a 45 tooth rear for acceleration, while the SV650S has a 15 tooth front and a 44 tooth rear for higher top speed.  Some S owners go down a tooth on the front or up one or two at the back to claw back that missing acceleration.
Original exhausts rot – they’re not the most hardy pipes. Also try to steer clear from loud end cans unless you’re best mates with your MoT man. Misfiring often means pre-2003 bikes haven’t been suitably jetted for the can – ask for any proof of this or dyno work. 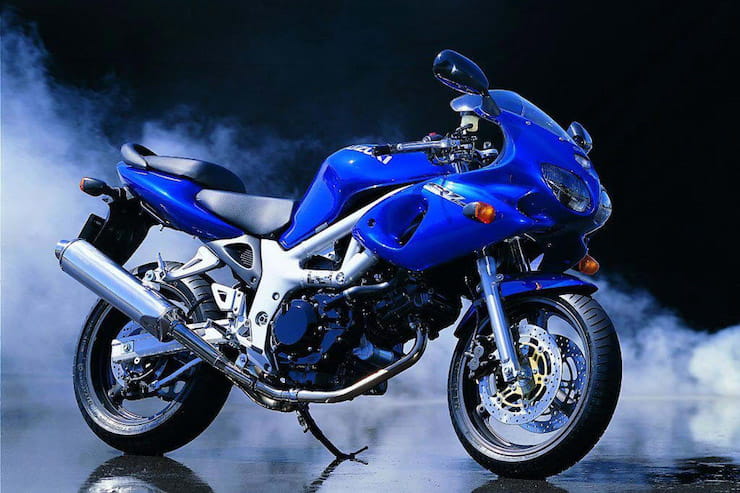 A double-edged sword, this. Being a lower-revving middleweight twin, and a fairly lightweight one at that, means SV fuel consumption can be pretty good – above 50mpg if ridden gently. But there’s the rub: the lively, entertain SV also thrives on revs and its sweet handling encourages the rider to thrash it, both counting against any sort of economy. Overall, expect around 40-45mpg.

Overall, SV handling is very sweet indeed – far better than most expect, in fact, from a budget, middleweight machine. Steering is neutral and precise which, combined with the SV’s slimness and light weight makes it extremely nimble and entertaining. On the downside, the forks are a little underdamped and undersprung and the single rear shock is likely to be worn out and have lost damping by now. If you simply want a cheap commuter that may not matter much. On the other hand, the SV’s success in Minitwins racing means plenty of knowhow and upgrades are available. www.jhsracing.co.uk are the experts in SV track preparation and much of this translates to a better road bike. Call them. 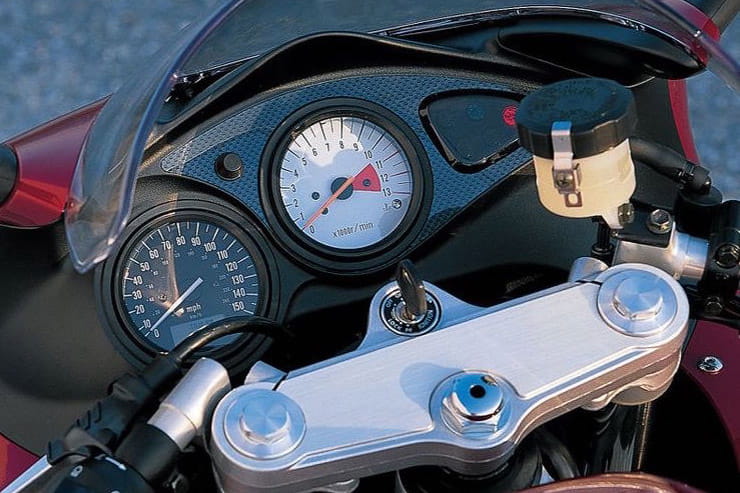 The twin front discs and basic twin piston calipers were on the basic and budget side even when the SV was introduced and now look decidedly old-fashioned but on the plus side, the SV’s light weight helps mean they’re not particularly lacking either – unless you want to take it on track. If you do want to upgrade braided hoses and softer compound pads work well.

In general day-to-day use the SV copes fine, proving natural and nimble with good ergonomics (the S version has slightly lower bars) and decent enough comfort. On longer hauls over distance, it’s short-comings start to show. The naked version, unsurprisingly, leaves the rider far too upright and exposed for any kind of motorway miles and, while the faired S is an improvement, its fairly compact riding position and lower bars result in discomfort after an hour or so.

The original SV is an ageing, budget motorcycle so don’t expect many frills. There are no modern-style electronic rider aids, the clocks on the original are analogue (they were among the upgrades on the second generation version). However the SV’s popularity and racing prowess does mean that there’s a wide-range of after-market goodies: some good, some bad. When buying used try and get the original bits in the deal – especially exhausts. While mini-indicators, undertrays and the like make a common bike more unique, more useful items include bigger screens (better comfort) and fender-extenders (saves road crap from hitting that cylinder and exhaust header.) Try the excellent www.sv650.org for info on what works and what doesn’t.

Being a budget bike also means you should expect neglected or older machines to suffer. Finish isn’t quite as bad as earlier commuter/budget Suzukis like the Bandit or the awful GS500E, but paint and plastics can suffer from neglect. Later models do seem more robust. 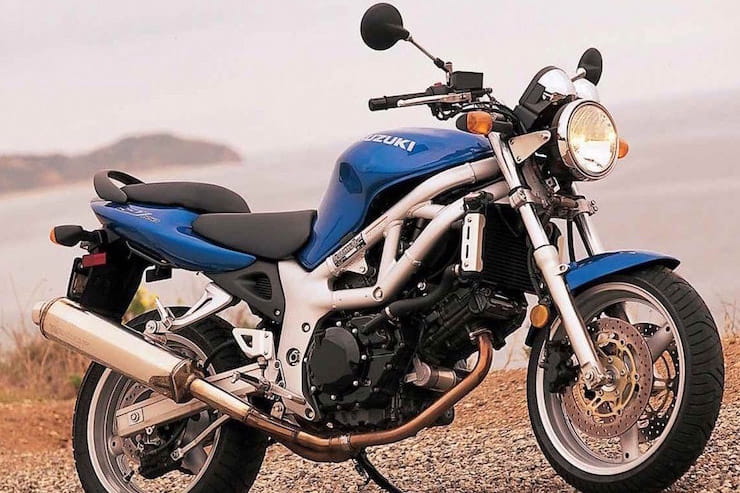 The SV650, in both its guises, is one of the biggest motorcycling success stories of the new century. Accessible, affordable, versatile, fun and with lots of character it proved so deservedly popular that it remained in production for over 10 years. This original, ‘jellymould’ version, however, was relatively short lived and is starting to become rare, but good ones still exists and can provide great ‘first big bike’ motorcycling for bargain, sub-£2000 money, but be quick – it’s still one of the most sought after motorcycles in the classified sections and second-hand bike showrooms, which says a lot.

Three things we love about the SV650…