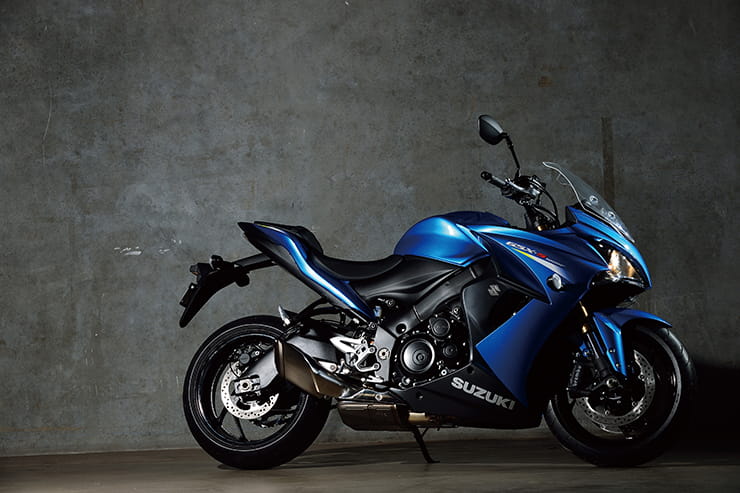 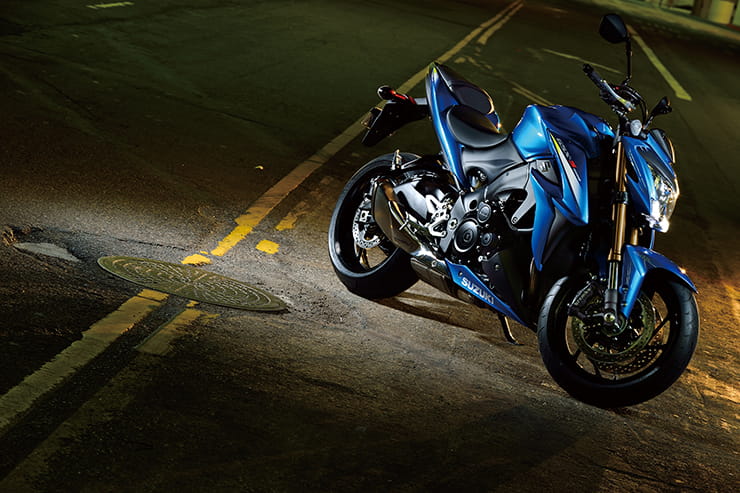 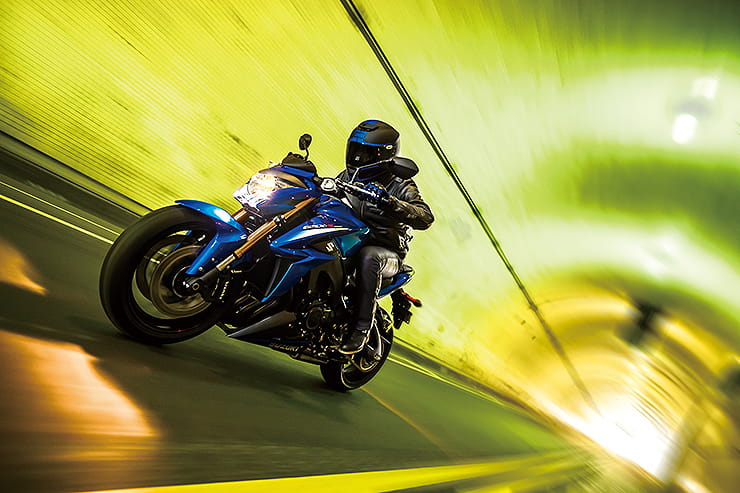 Blighted by less than complementary reviews from the word go, Suzuki’s GSX-S1000 and faired GSX-S1000F have had a stuttering start to their life. Never the most popular of machines, a few irritations have seen reviews overlook the fact that both GSX-S models are very well priced, boast a cracking engine, a good array of modern electronic assists and actually look pretty tasty to boot. If only Suzuki had invested in a decent shock and got the fuel injection right from the word go, they would probably have enjoyed more showroom success…

Brand new, Suzuki are attempting to get £10,099 and £10,199 respectively for the naked and faired GSX-S models, which is more than a little optimistic. As well as being subject to constant finance deals and discounts, it is pretty easy to locate pre-registered ‘brand new’ GSX-S models with just one mile on the clock for as little as £8500 (generally 2019 or even 2018 models). What this does is destroy re-sale values on bikes that have actually been ridden and you can buy a 2016 model for £4999 if it is approaching 20,000 miles and just under £6000 for one around the 10,000-mile mark. That’s a lot of bike for your money considering it is only just out of warranty! Haggle hard on a private sale and £4500 should be achievable for one that is showing in the 20,000-mile region. 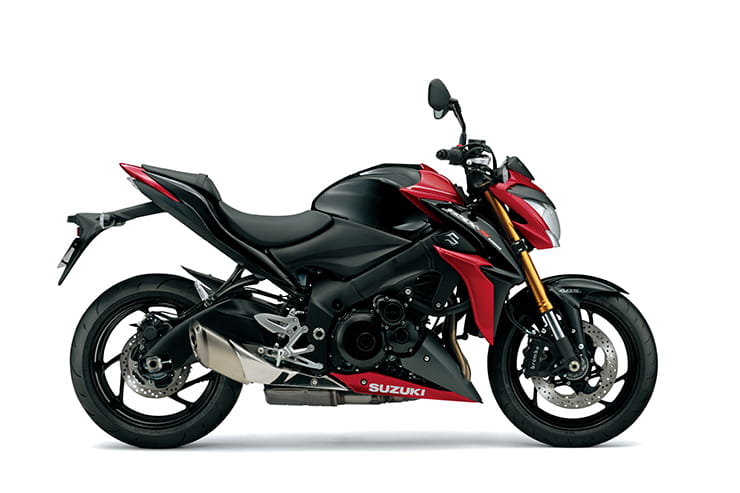 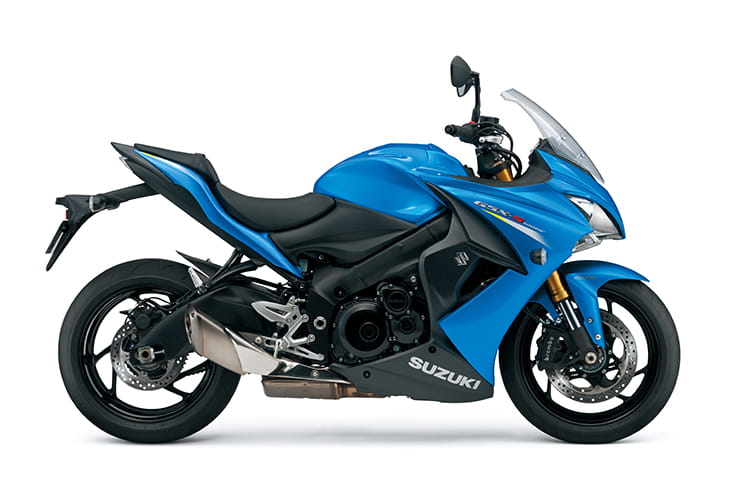 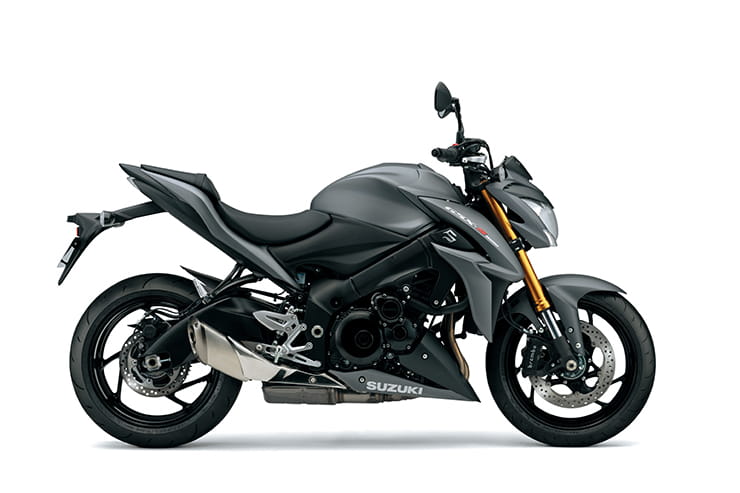 The GSX-S’s engine is based around the GSX-R1000 K5’s lump with a stack of alterations that include new throttle bodies and a revised head. A motor that was already known for its strong mid-range, the updates for use in the GSX-S models make it even stronger and this is one gutsy inline four with a lovely smooth torque curve. Irritatingly there are quite intrusive vibrations low in the rev range but the engine itself is no slouch and with a claimed 150bhp and 79.7 lb-ft is more than powerful enough for road use. Which brings up an odd point. In 2017 Suzuki ‘updated’ the GSX-S and it gained a bit of extra power – weirdly they didn’t actually really touch the motor and it turns out were in fact under-quoting its power figures before…

A well-documented annoyance with the GSX-S is its throttle response, which is a bit too abrupt and not particularly nice for road use, especially with a pillion when you are trying to be smooth. Again, another slightly add thing here is that in the update Suzuki changed the GSX-S models’ throttle tube to alter the cam on which the tube pulls the throttle cable, giving the 2017 bike the impression of being less aggressive on the gas at initial throttle opening. If you want some extra spunk in your GSX-S, swap the throttle tube for a pre-2017 bike’s unit and if you want it more relaxed, go for a post-2017 tube. This fix is, however, a sticking plaster and you are far better getting the bike set up on a dyno and re-mapped (either via the ECU or a fuelling module) to get rid of the jerk (throttle, not rider). Aside from the throttle response, fitting heavier bar end weights helps to damp out the vibrations and that’s about all there is to do on the GSX-S’s engine aside from service it (valve-clearances are at 15,000 miles). It is a solid and under-stressed lump and the gearbox is also nice and robust. A few owners (ok, a lot, it’s a Suzuki) stick on an aftermarket can, which does release a few ponies and makes it scream like a GSX-R. 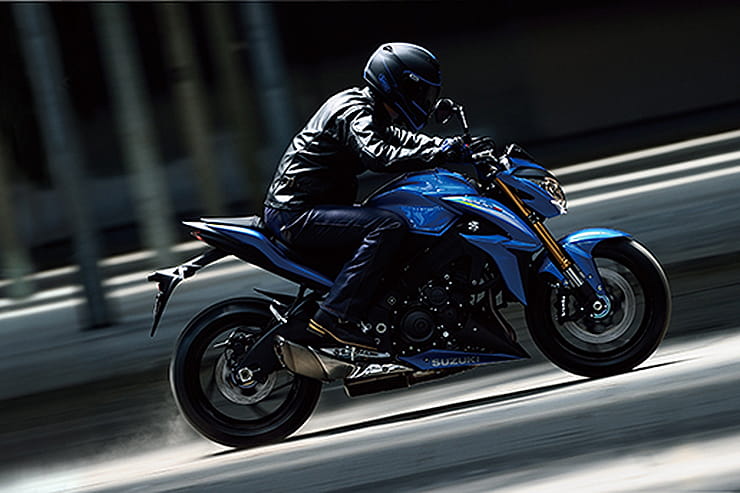 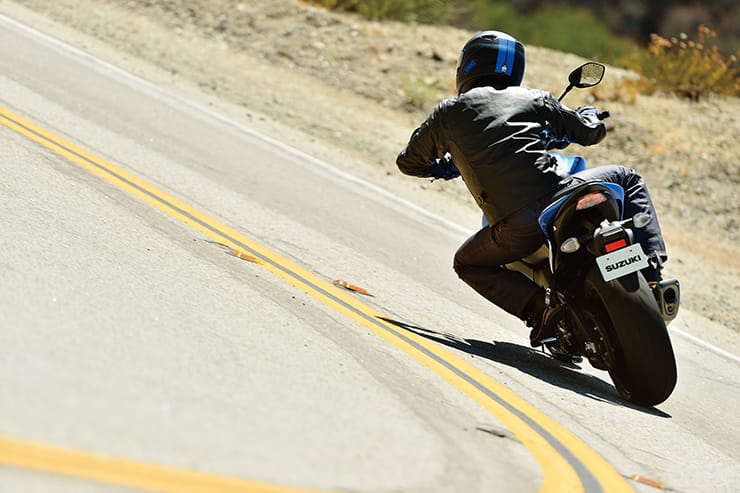 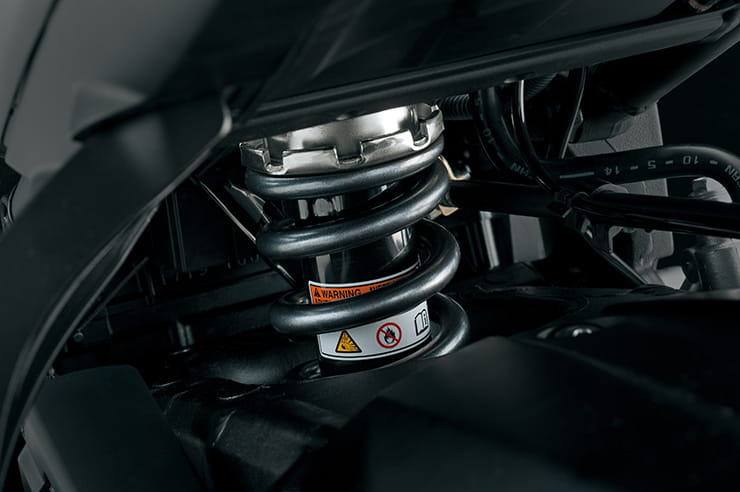 The GSX-S is quite a low-revving bike and economy figures in the 40-50mpg range are relatively easy to achieve. It’s not a massively thirsty bike to ride and also quite cheap to insure.

Again, we have to start with a complaint here as the GSX-S’s shock is very poor quality, delivering a jolting ride as it lacks rebound damping and instead tends to fire back up at you when you hit a bump. If you have bought a bargain GSX-S (you probably will have) spend the money saved on a quality aftermarket shock absorber and junk that horrible OE unit. The forks are actually quite good and have full-adjustability, it’s the shock that lets side down. With sorted suspension the GSX-S is a nice bike to ride with an agile chassis and steady and secure handling. It’s not a full-on Tuono-style super naked, but it can certainly be taken on a trackday and thrashed through some twisty bends. Be a bit wary of a higher-mileage bike’s suspension linkages as they are fairly poorly greased by the factory and may require stripping and re-greasing to ward off any seizure in the near future, especially if you plan on riding it through winter.

Initially ABS was a £500 option extra on the GSX-S1000 where the GSX-S1000F came with it as standard, however this changed after the 2017 update when both bikes gained it as standard. Although branded Brembo, Suzuki’s choice of OE pad is very conservative and that means they lack initial bite. Swap the OE pads for high-friction alternatives and they are vastly improved. On track the best advice is to disable the ABS (there is a fuse…) as it isn’t  really up to track work and the ABS quite quickly gets its knickers in a twist. 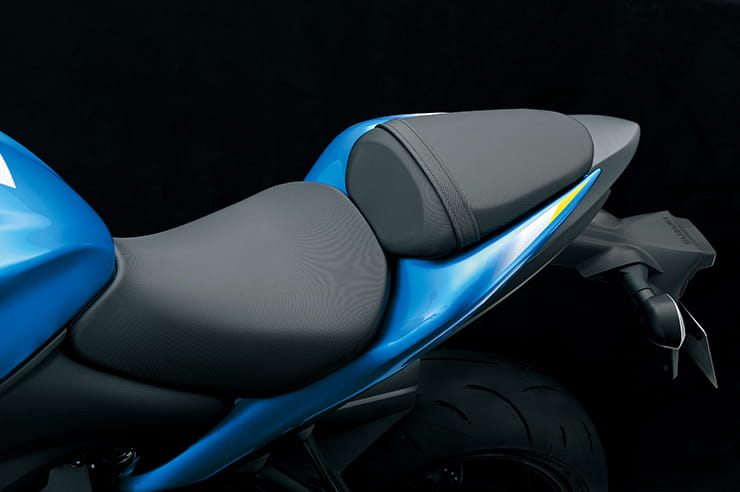 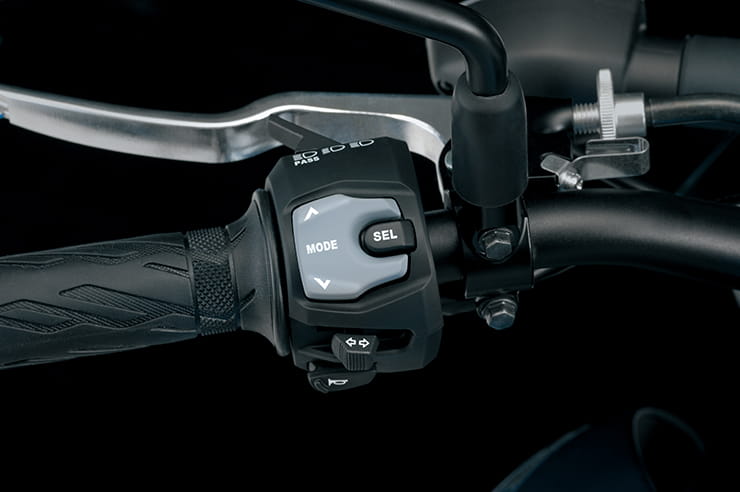 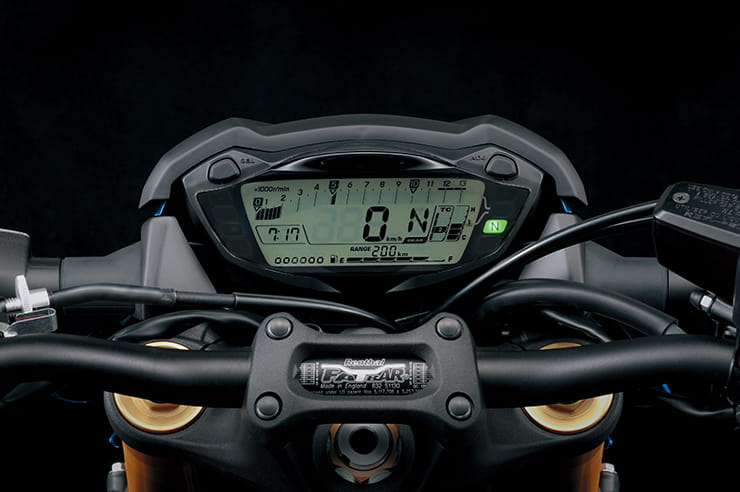 Pleasingly, even the ‘sporty’ faired GSX-S model has tall upright bars and nice low pegs, meaning it has a fairly relaxed riding position. However, and this is a big annoyance, this is no sports tourer as Suzuki don’t sell panniers for the F, which is really irritating, and the OE screen is very low. A taller screen helps matters slightly, but the lack of luggage on what (on paper) seems a sports tourer is very poor planning by Suzuki. You can add a small screen to the naked bike, but its exposed nature will always see it be a struggle when it comes to constant high-speed cruising. Solo touring only, don’t bother trying to take a pillion as the fuel-injection, vibes and poor shock will make it a bit of a miserable trip.

The GSX-S is a new generation of motorcycle and as such you get ABS (first as an option and then standard fitment) which can’t be turned off and three-stage traction control, which can be deactivated while on the go. Neither system is angle-sensitive, but it isn’t bad unless you take the bike on track, which is when the ABS starts to protest. The GSX-S also has Suzuki’s Easy Start system, which isn’t much to write home about, and post-2017 bikes get a quickshifter (up only). In terms of accessories, Suzuki sell a range of bolt-ons as well as ‘accessory packs.’ You can get the ‘carbon sports pack’ for £720 which consists of bolt-on carbon bits or the ‘tourer pack’ for £779 which is a taller screen (up 10cm), heated grips, a pillion seat bag and tank bag. All accessories are available separately through Suzuki (but are cheaper when bought together in pack form) and alternatives for most can be found at aftermarket suppliers.

Brand new (and despite some hefty discounting by Suzuki) it is hard to justify buying either GSX-S model as to be brutally honest, there are better and far more accomplished machines out there for similar price tags. In the used market, however, the GSX-S is quite a bargain and the money saved can be invested in ironing out its faults – leaving you with what is actually a very good motorcycle. Not brilliant, but certainly very good. 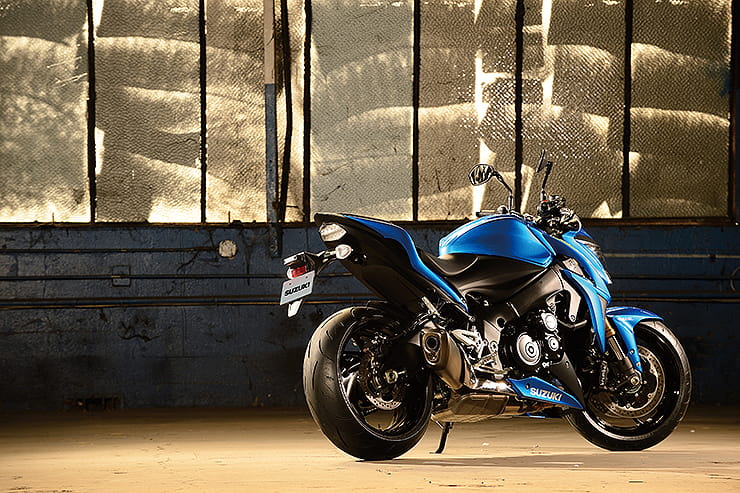 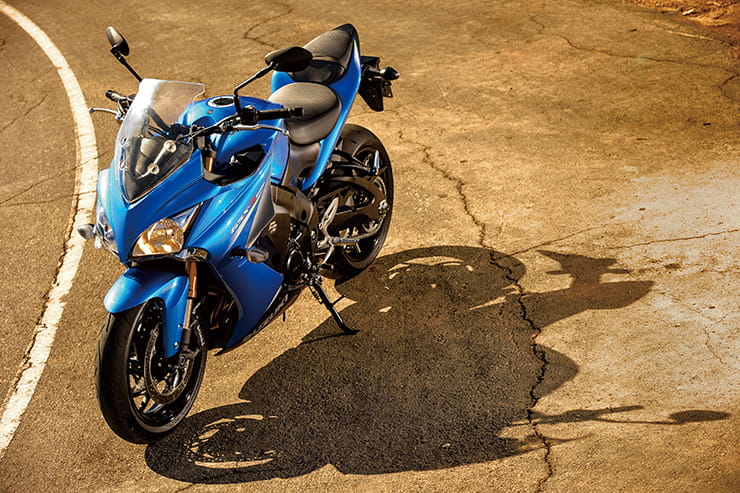 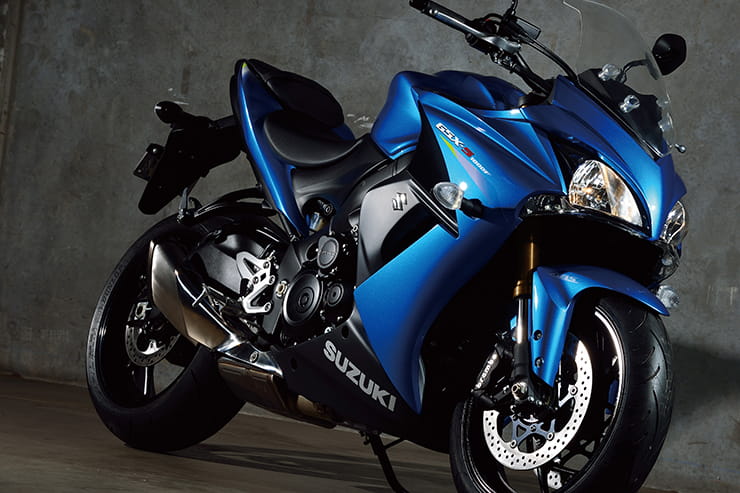